Winona State safety Andrew Spencer (23) intercepts a pass during a game against Minot State last season in 2015. Spencer led the team with three interceptions as a sophomore.

Winona State’s Andrew Spencer celebrates with fans after intercepting Upper Iowa for a touchdown during a 2017 game at Altra Federal Credit Union Stadium.

Winona State defensive back Andrew Spencer runs down the field after intercepting the ball during the Warriors homecoming game against St. Cloud State in 2015.

A former Winona State University football player has gained national fame for a reason other than sports: a quest for love.

Andrew Spencer, who was named WSU’s Male Athlete of the Year for 2017-18, was one of the candidates on ABC’s “The Bachelorette” during the current season.

According to the ABC network’s biography for Spencer, “Andrew S. is truly a man of the world. He spends half the year living in Vienna, Austria, where he plays professional football, and the other half in the Chicago area, where he works as a football coach and teacher’s assistant. Andrew S. says living in Europe has given him an updated outlook on life where people work to live instead of live to work.”

The biography continues on the network’s website, “He is not afraid to make a grand romantic gesture and says that when the moment calls for it, he has no problem driving for hours just to hand-deliver lunch and fresh flowers to that special woman. Andrew S. can’t wait to get married and hopes to have five kids one day. The one thing he cannot handle in a relationship is poor communication. Lucky for him, the Bachelorette has no trouble in that arena.”

Spencer made it into the season’s top four candidates — a big accomplishment considering each season starts with 30 eligible men.

Monday night, though, Spencer’s run on the show ended dramatically.

After not being selected to continue by Thurston, due to Thurston having stronger connections with other continuing contestants, Spencer left her a note saying he’d be waiting for her if she ever wants to be with him.

After she read the note in their hotel, she ran downstairs to say goodbye and to ask him if he’d be willing to stay a little longer.

Spencer, though clearly emotionally attached to her, said no.

He expressed in the episode that her decision hurt him.

“I would love nothing more than to be with her,” Spencer said on the show while sharing about his heartbreak.

He held to his decision of not staying. “I don’t want to go through this with her again. I don’t want to be standing at a rose ceremony waiting for her to not chose me again,” he told the camera.

With the decision and his departure, his last episode was the seventh in the season.

To say the least, Spencer was a fan favorite on the show, revealed by many Twitter reactions to his departure.

“Marry me instead Andrew Spencer,” one fan, Caeley Robinson, posted.

Another user, with the username TheKyleConnor, wrote, “I’m convinced Andrew Spencer is the best man on this planet.”

Many fans have begun requesting on social media that Spencer returns to the channel to be the lead on the next season of “The Bachelor.”

While on the WSU football team, before his rise to reality television fame, according to Spencer’s no longer updated LinkedIn account, he was on the leadership team. His role included organizing and speaking on behalf of the team.

Spencer did not complete his degree at WSU, as after being an All-American on the football team “he stepped away to pursue football more intensely,” according to university staff.

Cinnaire Solutions Corp. is proposing the largest development for the 4th Street site. The $15.8 million, four-story building would include 65 units, all but 13 of those dedicated to low-income residents.

The city of La Crosse Community Development Committee voted to move forward with a $15.8 million affordable housing development along the south end of Fourth Street.

The group made the decision at a Tuesday afternoon special meeting, which convened in closed session for around an hour before approving a four-story, 65-unit complex from Cinnaire Solutions Corp. It passed on a vote of 5-2.

City officials weighed three proposals that were presented last week, all that were required to focus on low-income housing, and some commission members disagreed with the choice. 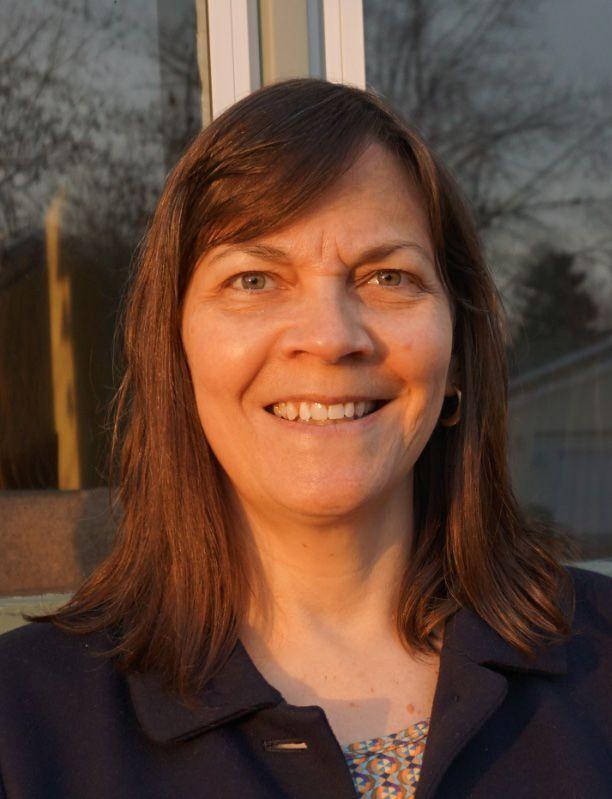 Trost and commissioner Linda Lee both voted against the Cinnaire project.

Mayor Mitch Reynolds said each developer presented “solid proposals,” and encouraged the other companies to return to pitch more affordable, quality housing projects in the city.

The new development will fit in between Jackson and Mississippi streets on the east side of Fourth Street, where the city has purchased a row of properties it plans to demolish. Cinnaire hopes to purchase the remaining properties on the lot for its development, but will redesign if not successful. 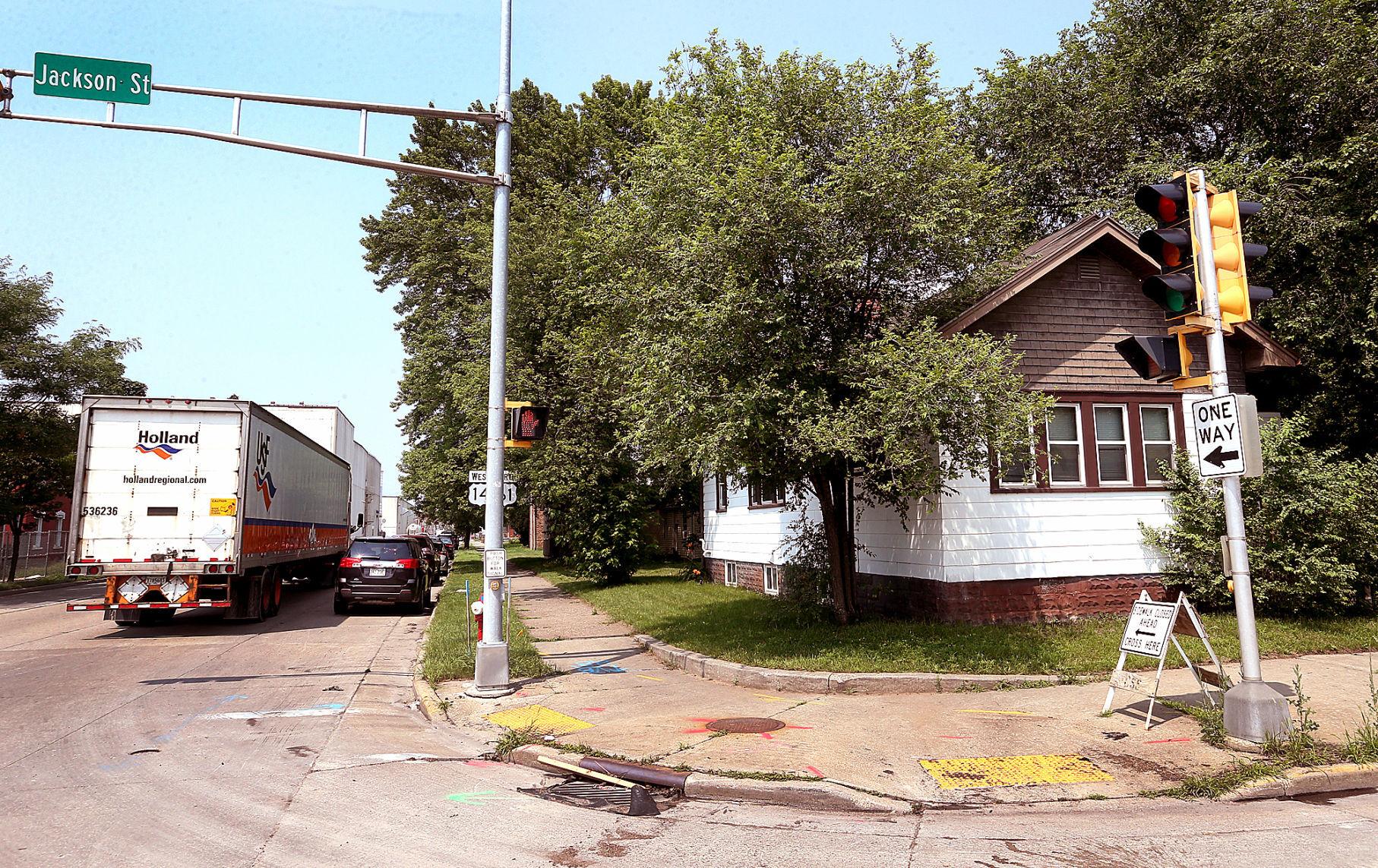 A stretch of 10 homes on 4th Street between Jackson Street and Mississippi Street are slated be demolished to make way for a new affordable, multi-use housing development. 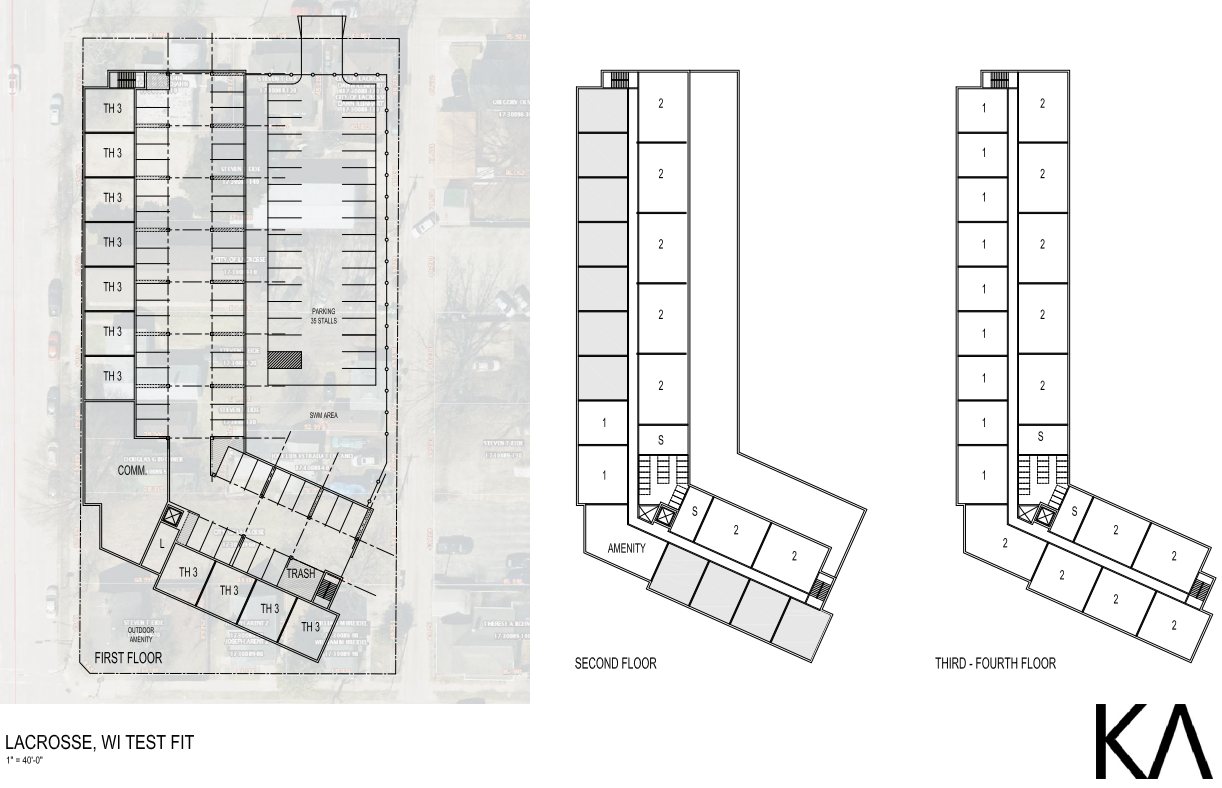 A preliminary architectural rendering shows the floorplan for a development approved for Fourth Street by Cinnaire Solutions Corporation. It will be four stories and include 65 units, with a focus on people transitioning out of homelessness and low-income residents.

Cinnaire is partnering with Lutheran Social Services of Wisconsin and Upper Michigan in La Crosse for its wrap-around services for those transitioning from homelessness, and 17 apartments will be dedicated to those individuals. The services will also aim to aid veterans in the community.

In addition, 35 apartments will be for low to moderate income residents, and 13 for market rate. Rents will range from $358-1,300 in this project.

The design is still in early stages, but it initially calls for residential spaces facing Fourth Street with a 35-stall covered parking lot on the east side of the building. It will also use large windows and various textures to better blend in to the less dense residential neighborhood, and it includes an exercise and community room, and green space.

The company plans to meet with residents in the Powell-Poage-Hamilton and Washburn Neighborhoods to iron out the design details as it moves forward.

Cinnaire hopes to obtain 9% in low-income housing tax credits from Wisconsin Housing and Economic Development Authority to help boost the affordability of the project. It also expects to use government grants and loans, including locally, and private loans to foot the bill of the project.

Construction could begin on this development in the spring of 2023, and leasing could begin the following spring.

Cinnaire is a Michigan-based company with an office in Madison. Company officials stated that the group focuses on La Crosse, Detroit and Wilmington, Delaware, as “priority” cities.

The company has overseen the new construction of The Bay Lofts, a market-rate apartment complex in Sturgeon Bay, and the restoration of Norman Towers in Monroe, a former historic boarding school that has been turned into affordable senior living.

The Cinnaire development will need final approval from the La Crosse Common Council at its August meeting.

This story was updated July 21 to correct the vote tally on the motion, and to include the Washburn Neighborhood in expected community engagement.

Riverfest is back through Sunday with music, food, games and, of course, fireworks. Enjoy these photos and share yours for this gallery by sen… 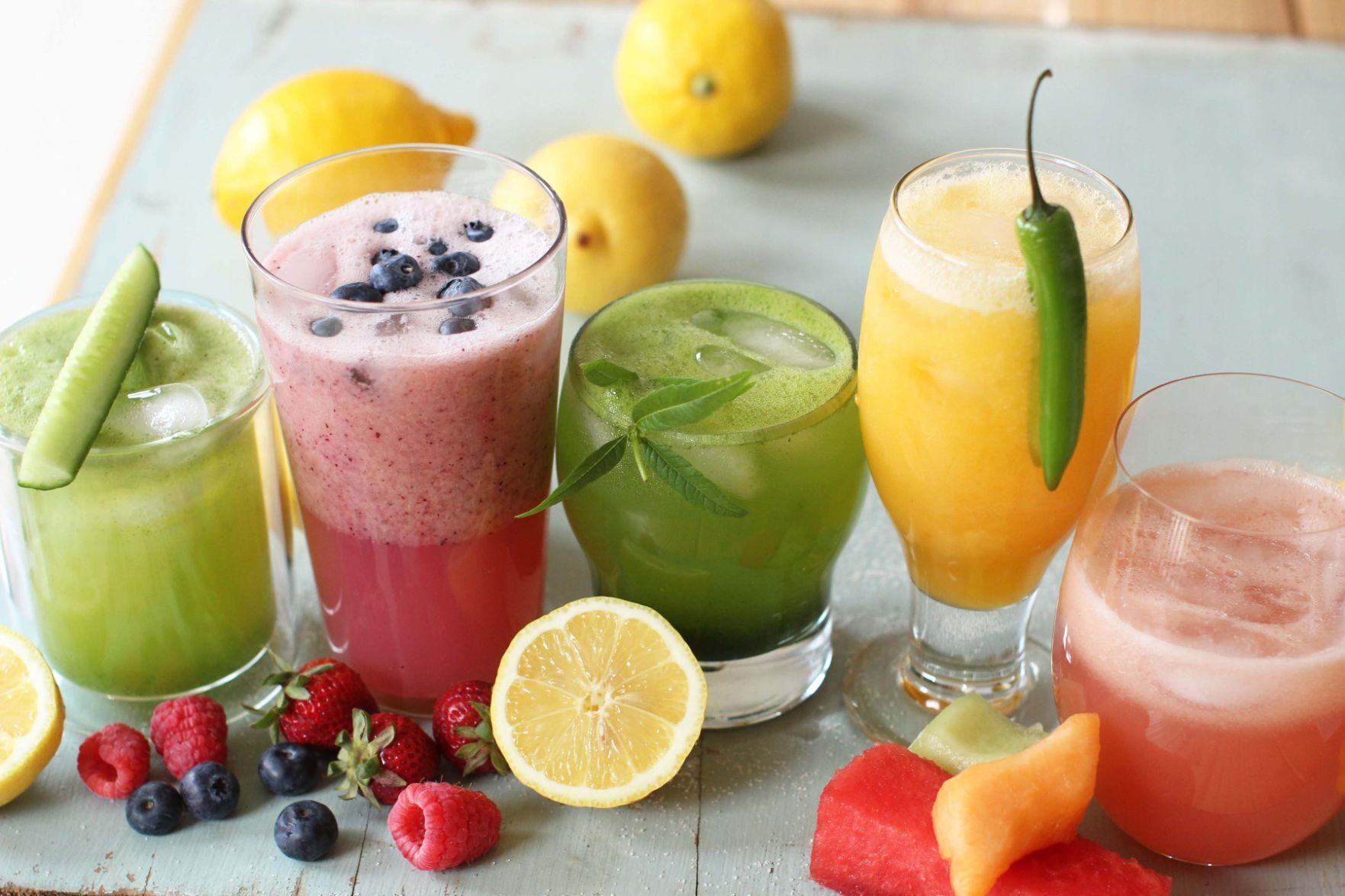 These infused lemonades — from left, cucumber, mixed berry, herb, mango chili and watermelon — are colorful and refreshing way to beat the summer heat. 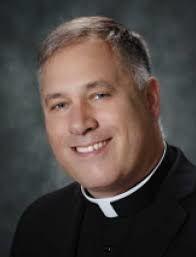 Msgr. Jeffrey Burrill, a priest of the Diocese of La Crosse, has announced his resignation as General Secretary of the U.S. Conference of Catholic Bishops.

In a July 20 memo to bishops, Archbishop Gomez said he had accepted Burrill’s resignation, effective immediately.

“What was shared with us did not include allegations of misconduct with minors. However, in order to avoid becoming a distraction to the operations and ongoing work of the conference, Monsignor has resigned,” the archbishop said.

Reports came from The Pillar, a Catholic news site, that said it found evidence the priest engaged in serial sexual misconduct.

An analysis of app data signals correlated to Burrill’s mobile device shows the priest also visited gay bars and private residences while using a location-based hookup app in numerous cities from 2018 to 2020, even while traveling on assignment for the U.S. bishops’ conference, The Pillar reported.

The Diocese of La Crosse issued this statement today:

“Msgr. Burrill was ordained a priest for the Diocese of La Crosse in 1998 and in conjunction with the Diocese’s Protect and Heal initiatives has consistently completed safe environment training and background checks. His most recent background check was completed in 2020.

“Bishop William Patrick Callahan and representatives of the Diocese of La Crosse are saddened to hear the media reports related to Msgr. Burrill. The Diocese of La Crosse pledges its full cooperation with the Conference of Catholic Bishops to pursue all appropriate steps in investigating and addressing the situation.

“Please remember Msgr. Burrill and all affected in your prayers so they may find refuge and strength in God’s unfailing love.”

Trisha Abbott-Mathews and her daughter, Ruby, 10, are seen at their South Side rental. Abbott-Mathews is one of many residents concerned about possible rent increases in La Crosse, an issue among many as La Crosse officials weigh how to spend nearly $22 million in American Rescue Plan Act dollars.

Residents and stakeholders are invited to participate in a series of surveys where they can pitch ideas on how the COVID-19 relief could be used to fund community projects, individual assistance and nonprofits.

La Crosse County is set to receive nearly $23 million of its own, which it is weighing using on housing, the environment, infrastructure and more. The remaining municipalities in the county will receive about $6.59 million in total.

The county is set to vote on its spending by the end of the calendar year. The city has yet to set an exact timeline.

The guidance from the federal government so far allows municipalities to use the unprecedented funding on public health, economic relief for businesses and individuals, premium pay for certain professions and infrastructure. It cannot be used for pensions, reserve funds and is not recommended to be used to lower taxes.

To weigh-in on how the city should spend its ARPA funds, visit bit.ly/2UyQTMZ, where there are three options to give ideas or proposals on community projects, individual relief and nonprofit giving.