Miller, 47, executive chef and co-owner of L'Etoile and Graze on Capitol Square, who began working at his grandparents' diner in Racine when he was 6, said on Facebook, "Today, for the first time in my entire career, that I know of, a FOH (front of house) team member put in their notice, and cited 'guests being toxic.'"

"I’m reaching my limit," he wrote. "Like how hard is it to be nice? The entire world is still short staffed, and you yelling about your table not being ready the moment you arrive is not making that any different."

L'Etoile, which sits atop Madison's fine-dining scene, and the more casual Graze, reopened in April 2021 for in-person seating after being closed for more than a year due to the pandemic.

Miller said Sunday night he's seen a larger amount of bad behavior since the reboot and has had people come into his restaurants and treat his employees poorly. Mostly at Graze. "L'Etoile is more chill for obvious reasons," he said.

Helene Palau-Tejeda, director of operations for Deja Food Group, which runs both restaurants, said by last October it got so bad that she put a sign in the lobby between the two restaurants that says, “Please be patient and kind to our team!"

The sign, which is still out, hasn’t had much effect, Miller and Palau-Tejeda said.

"Like, that shouldn’t need to be a thing," Miller said, adding that in the past, he and his staff expected rude behavior at brunch.

"Now it’s not even rudeness, its people not understanding how restaurant reservations work. Like you can’t show up at 6 p.m. if you made a reservation at 8:30 and then literally scream at the host that you see a table and should just be able to sit immediately," Miller said.

He said people book online themselves, sometimes for the wrong day or time or for the wrong number of guests and then show up and yell at his employees. "Like, we didn’t make these mistakes. Sorry we don’t have your table ready. You know, it’s like that."

Miller said it would be different if people still had to call and an employee on the phone possibly misheard them or wrote down the wrong information. "But people are booking online and blaming our hosts or our restaurant for it."

He said his employees do their best to work these customers in, and ask for 10-15 minutes to figure it out, "and then grown people turn into crazy people for some reason."

Miller said that bad brunch behavior is a long-running joke in the industry and he's not sure why people can often act uncivilized during that meal.

"I used to say everyone at brunch already knows how to make brunch at home so maybe that’s why everything has to be so specific," he said. "But also maybe people are like tired and hungry, hung over and crankier in the morning? Who knows. It’s mostly just a known thing that brunch is the worst."

Palau-Tejeda said putting out the "be kind" sign was hard for her because it violates the "fourth wall" between a restaurant and its customers.

"We never want to raise the curtain for our guests," she said, adding that they don't want to make customers aware of the difficulties in running a restaurants these days. "Because we want you to have a perfect experience when you're dining with us. We don't want to mention that we're possibly understaffed."

In the past, staffing and other hardships would never be mentioned, she said. "And it did get to the point where we had to be just open and upfront with our guests to kind of set realistic expectations. And when that wasn't working and the attitude didn't shift, I did resort to just putting out a simple, 'please be kind.' And I haven't really seen a change since then."

Palau-Tejeda reports getting screamed at almost daily as the host at Graze and said it can make or break an evening for her.

"I'm speaking to probably 99% of our guests and that's how I kind of know whether or not it's going to be a good evening or a tougher one," she said.

Palau-Tejeda, who is also acting general manager for Graze, said it wears on her personally, but as a leader, causes her to worry about what her staff will experience at the tables.

Before the restaurant opens each day she said she prepares employees for the type of guests who might be arriving that evening, "just making a point to discuss how to handle a (bad) situation. But I think for me personally, it has started to wear me down a little bit."

She said the reason she hosts every night, aside from it being one of her favorite roles, is because of how unfair she thinks it would be to leave a young host, most often a female, alone to deal with the harassment.

Palau-Tejeda, who has worked at Graze since 2018, said she has definitely seen a public lack of patience that wasn't prominent before the pandemic.

"There's definitely an increase in frustration that didn't really exist for some really basic things, like not having a table right away or arriving too early and not being seated half an hour or an hour before your reservation," she said.

Palau-Tejeda said there are a number of reasons behind what she's seeing from some unruly customers. She said once restaurants were allowed to reopen at full capacity about a year ago, there was a big desire from the public to go out and enjoy themselves and enjoy the summer for the first time in a long time.

"But restaurants weren't able to bounce back as quickly, and as everyone knows, we're still facing a staffing shortage," she said. "So, the demand is there from the public, but we can't meet everyone's expectations as quickly as they would've expected us to."

Miller didn't want to name the young employee who left, saying only that the person worked at Graze for about a year, running food out and hosting and was "a really good member of our team."

Palau-Tejeda said it would be hard for her to switch that employee to the dining room at L'Etoile because that person is underaged and less experienced. "It's probably a lot more work than they're able to do at the moment," she said, noting that Graze was a good place for them to start.

She said she'd welcome the employee back if circumstances change and they were interested in L'Etoile, where expectations are even higher from diners.

Kristine Hillmer, president and CEO of the Wisconsin Restaurant Association, said she feels for Miller, adding that these situations are happening everywhere, and not just in restaurants.

"It's really any place," she said, "and just a dose of kindness and patience and understanding is critical right now. Everybody's having staffing issues and difficulty in finding staff."

Hillmer said she's hearing about a lack of civility across the state and from other states, too. "This isn't just a Madison thing and it's not just a restaurant thing. Customer service is just particularly difficult to be in right now."

Miller said some people think that because they're spending money in a restaurant or at a business, they have the right to belittle, yell at, threaten, "or just be downright mean, to whomever is there."

About a month ago, Miller said he had to deal with someone himself who was threatening his staff members and refusing to leave.

It’s a long story, and not for publication, he said, but the person bullied the restaurant's host to the point of tears and refused to leave when asked multiple times. Miller said the guy stood in the dining room confronting every server and runner, and then demanded to talk to him.

When Miller asked him to leave, the guy made it clear that he "knows who I am, and that I have a family" and told him "this is going to come back" on him.

Miller said his only words were, "I’m not here to talk, I’m here to ask you to leave," to which the guy said, "or what? Or what?”

In response, Miller said, "Like, yeah man, let’s fight in the dining room of my restaurant, like I’ve been through the pandemic, you can’t threaten me with anything worse than what I’ve already gone through."

Miller said he thought people would be more understanding because of what the service industry has experienced in the past two-and-a-half years, "and so many are… but man, so many aren’t."

He said he was shocked that the guy who threated him mentioned his family and his children. He couldn't believe the guy got so personal over a bad experience.

"This is what I’m saying, people don’t just say, 'I don’t like this food' or 'my server was rude to me,' they just go in on you as a person," Miller said.

"Society needs to figure out how to be a society again," Miller wrote in his post. "The hospitality industry used to rely on poise and grace to ease many situations and now I got people ready to throw hands up in here."

In 2012, Miller got a James Beard Award for "Best Chef: Midwest." Then, on national television in 2018, he took down "unbeatable" Iron Chef Bobby Flay on Food Network's "Iron Chef Showdown."

In his Saturday post, he said he's about to create a position for his restaurants he's calling a “not nice bouncer.” "Like if (you're) not nice, you gone son. Bye."

Sunday night he said he's mostly joking about such a position.

"I have thought seriously about spending a few nights out at the host stand myself," he said. "I can’t say that we would have a position opening for the not-nice bouncer yet... If people don’t get it together I can promise I won’t let this bad behavior just keep happening."

How the ‘Great Resignation’ has impacted 10 industries

How the ‘Great Resignation’ has impacted 10 industries 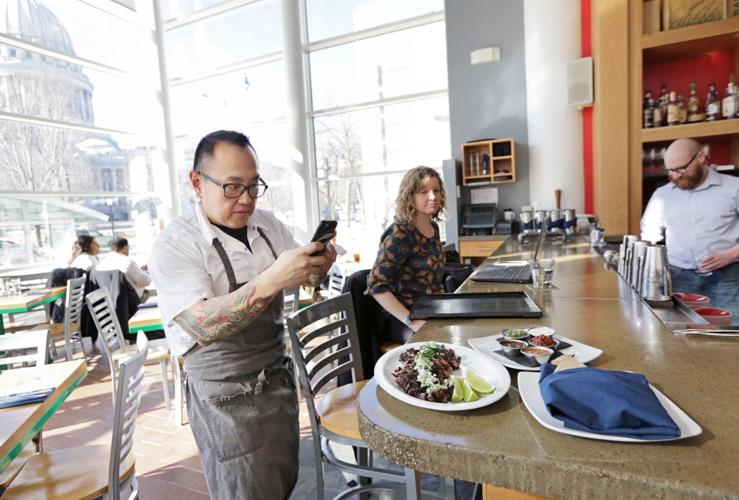 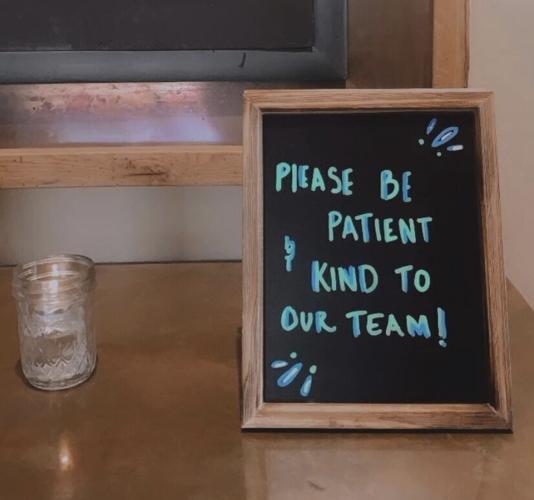 The sign displayed in the lobby of Graze and L'Etoile.