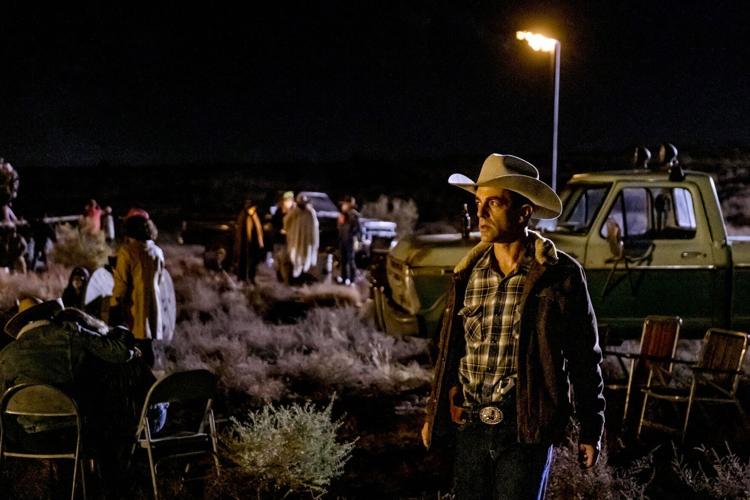 B.J. Novak plays a New York journalist trying to fit in in Texas in "Vengeance." 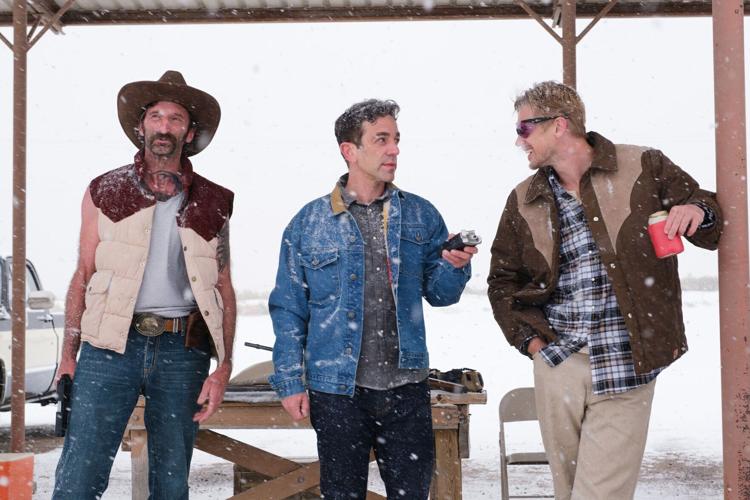 From left, Clint Obenchain as Crawl, B.J. Novak as Ben Manalowitz and Boyd Holbrook as Ty Shaw in "Vengeance." 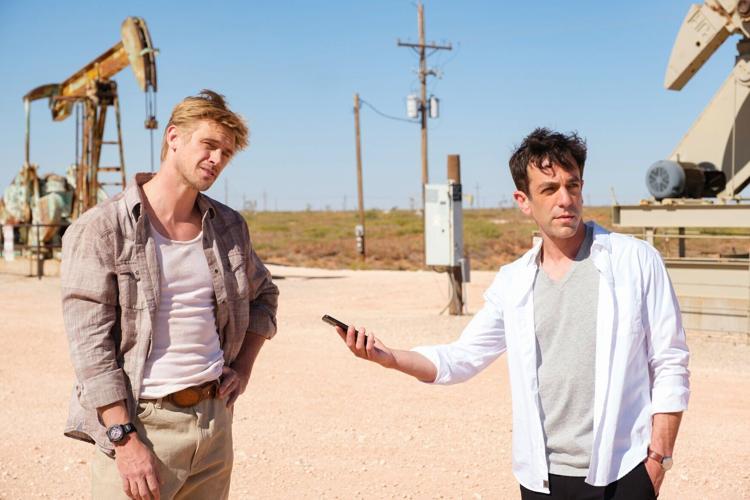 Boyd Holbrook, left, plays a Texan who shows a New York journalist (B.J. Novak) where his family has lived for decades in "Vengeance."

If you love “Only Murders in the Building,” you’ll embrace B.J. Novak’s “Vengeance.”

Just as clever, it mixes mystery and podcasts and comes away with a film that manages to comment on a number of levels. It’s a smart look at the country’s great divide and the media’s role in maintaining it.

Novak (who also wrote and directed) stars as Ben Manalowitz, a New York podcaster who heads to Texas when he gets a mysterious call in the middle of the night – his girlfriend has been murdered. Sadly, he doesn’t recall who she is (she was merely a hookup), but he agrees to go to her funeral in Texas. There, he meets her family, speaks at her funeral and decides further investigation could help him craft a podcast that addresses the differences between rural and urban, red and blue.

Staying in the dead woman’s room, he gets a sense of the environment that raised her and the desire to get out and start a music career.

He meets a local record producer, too, and tries to spin that restlessness into something bigger.

Ashton Kutcher stars as Quinten Sellers, the producer who wants the East Coaster to know they’re just as sophisticated in Texas.

Still, stereotypes linger. Ben tries to fit in at a rodeo, doesn’t know Whataburger and can’t quite wrap his head around the traditions that are entrenched in the Shaw household. Ty Shaw (Boyd Holbrook), the dead woman’s brother tries to open doors to people who can help him prove she didn’t just die of an overdose.

The signs don’t look good, but the atmosphere is wonderful. Ben sends recordings to his producer (Issa Rae) routinely and she’s just as smitten as he.

They get caught up in the minutiae and see themselves painting a picture of a world few have known.

Still, West Texas hasn’t been a favorite of filmmakers for nothing. Even viewers with a passing notion of the world know what’s pulling off here.

Novak makes a great story sponge. He’s eager for content but he never lets his subjects know what’s at play. Holbrook is good, too, as the good ol’ boy who’s willing to give the New Yorker just what he wants. While Dove Cameron gets some of the best lines (as one of the Shaws – they’re named for various locations), J. Smith-Cameron brings the heart, as her mother.

Podcast fans will be intrigued to see how those true-life mysteries are really crafted; others will realize this is often why East Coast media misreads the country.

“Vengeance” is a great debut film for Novak. It shows how smart writing can last much longer than any number of special effects.

Why is movie 'Hocus Pocus 2' blowing up Google search this weekend?

The go-down-easy Disney+ Halloween sequel for families stars Bette Midler, Sarah Jessica Parker and Kathy Najimy. The original released 29 years ago. Find out: Why all the buzz?

Sequels that made fans wait the longest

One Disney film waited over six decades to continue its story, and a beloved Christmas movie went nearly three decades before its follow-up was released.

25 best movies about couples on the run

Criminal lovers going on the run have inspired movies since 1937. Here's a look at the top 25 films about these thrilling couples.

When you make a list of the roles each of the Avengers plays, you don’t find many checking off the “comedian” box.

REVIEW: 'Don't Worry Darling' is steeped in atmosphere -- and questions

Beautifully directed by Olivia Wilde, the gothic drama Don't Worry Darling never fails to hold interest. But when it gets to the end – an interesting end – it somehow feels unfulfilled.

Almost 30 years after the Sanderson sisters found their way into the hearts of millennial kids looking for some PG-rated Halloween content, they're back in “Hocus Pocus 2," which reunites Bette Midler, Sarah Jessica Parker and Kathy Najimy. The film, streaming on Disney+ Friday, pits them against three teenager girls in modern day Salem. In her review, AP Film Writer Lindsey Bahr writes the film is exactly what it needs to be for an entertaining night in with the family and actually improves on the original, which was pretty mediocre, thanks to a strong supporting cast.

DETROIT — Sam Richardson has been climbing Hollywood's ladder for 10 years, but he knew he'd reached a new career plateau when people started dressing up as his characters for Halloween. "I've had people dress up as Richard Splett before," says Richardson, on a Zoom call from Los Angeles earlier this week, referring to his character from HBO's "Veep." More recently, he's had people sending him ...

Disney regularly wrings inordinate mileage out of nostalgia, which can easily obscure when the source wasn't quite as worthy of praise as we like to remember. "Hocus Pocus 2" should benefit from that dynamic, delivering a breezy sequel -- 29 years later -- that should provide go-down-easy Halloween viewing for families in the less-demanding confines of Disney+.

The scariest house on Airbnb is the 'Hocus Pocus' cottage. See what's inside.

Those brave enough to spend the night in the cottage may want to sleep with one eye open.

(RATINGS: The movies listed below are rated according to the following key: 4 stars — excellent; 3 stars — good; 2 stars — fair; 1 star — poor.)

B.J. Novak plays a New York journalist trying to fit in in Texas in "Vengeance."

From left, Clint Obenchain as Crawl, B.J. Novak as Ben Manalowitz and Boyd Holbrook as Ty Shaw in "Vengeance."

Boyd Holbrook, left, plays a Texan who shows a New York journalist (B.J. Novak) where his family has lived for decades in "Vengeance."