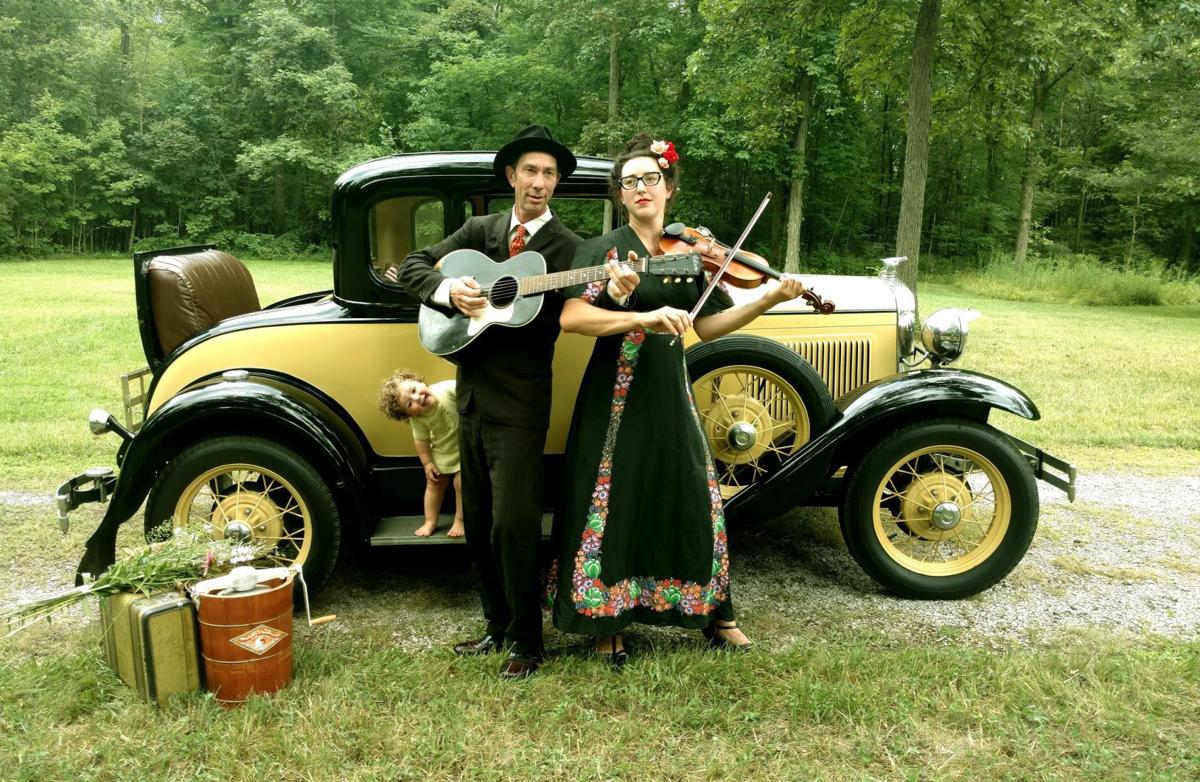 The Yellow-Bellied Sapsuckers (Joe Hart, Nikki Grossman and their daughter, Neva Rose) don't tour in this antique vehicle, but they do hit the road with a 1962 camper. 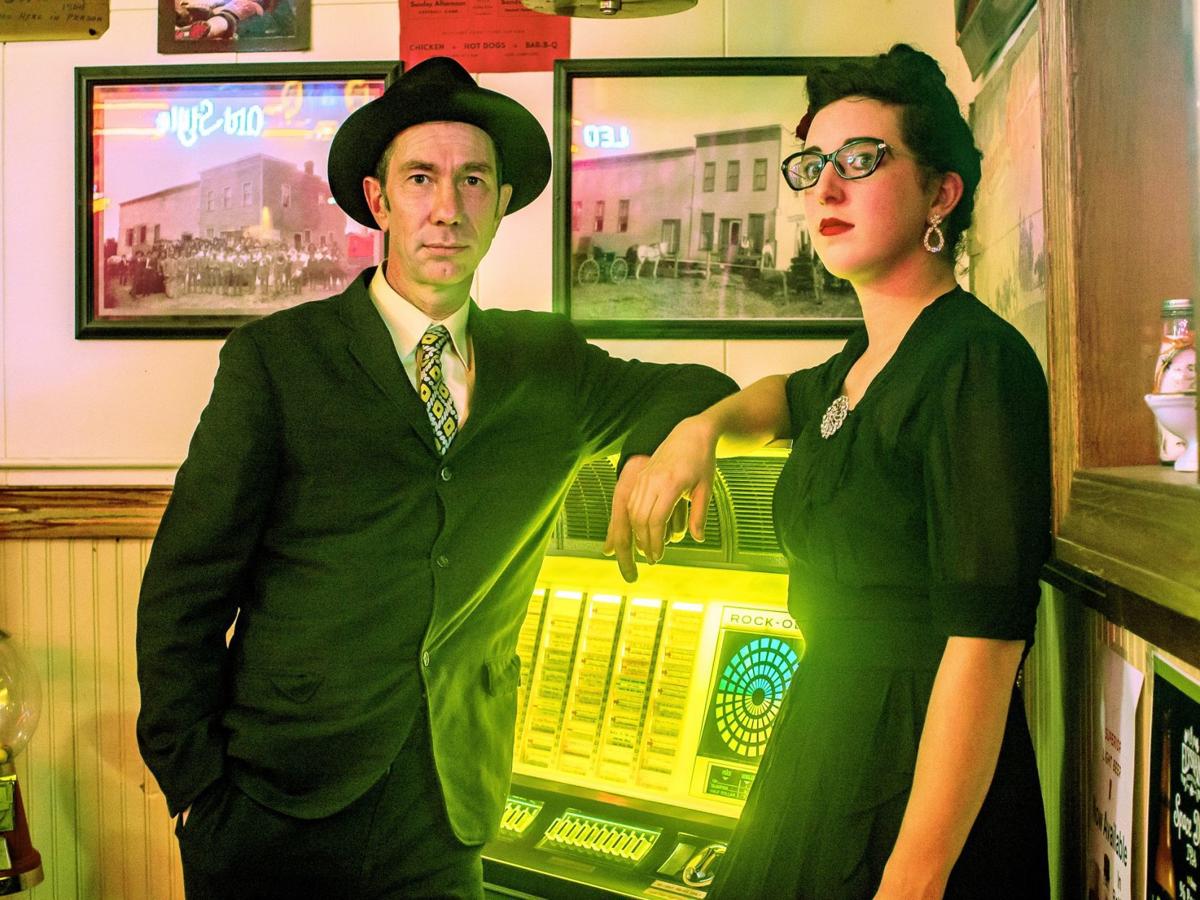 The Yellow-Bellied Sapsuckers celebrate the release of their third album, "Don't Think About Tomorrow Tonight," with a concert March 24 at the Pump House Regional Arts Center.

A lot of musicians bristle if you try to put their music in a specific genre, taking pride in being hard to define. That’s not how Nikki Grossman and Joe Hart of the Yellow-Bellied Sapsuckers look at it.

“I actually don’t want that, but it happens to be true about our band,” Grossman said. “It’s hard to take our music and put it into a category.”

They actually have a good way to define their music, coming up with a sort of tagline for the Sapsuckers: “A brand-new take on old-time country.”

Hart and Grossman are gearing up to celebrate the release of their third album, “Don’t Think About Tomorrow Tonight,” with a concert Saturday, March 24, at The Pump House Regional Arts Center, which will feel a little strange for them. They’ve put on shows in all kinds of coffeehouses and bars, but not all that many concerts where people are sitting down and attentive and nobody is trying to order drinks while they sing. “It’s weird to find ourselves in that situation, being a sit-down, quiet band,” Grossman said, noting that they started out as a square dance band, she on fiddle, he on guitar, not taking things too seriously. “Part of our story is we never planned for our band to take off. We just met and fell in love and had musical chemistry. … Somewhere along the line we discovered that people like our music and we can make a little money at it. We have something unique and special to share that people want to hear.”

They might not have planned to take off, but it seems like the Yellow-Bellied Sapsuckers are poised to gain altitude quickly.

On Saturday, a week before their Pump House show, they played an official showcase show at the South by Southwest music festival in Austin, Texas. It was a chance they never thought they’d get and a fun way to celebrate the second birthday of their daughter, Neva Rose, who is a regular companion on Sapsuckers tours.

And the band’s third album, the first that consists entirely of their own original songs, is loaded with a wide variety of memorable, finely crafted tunes, fully realized and recorded with the help of what Grossman and Hart consider the “A Team.”

At the core of the creation of “Don’t Think About Tomorrow Tonight” was John Wood, a recording industry legend in Britain, who produced and mixed the album. It was their first time working with a producer, and Wood brought a ton of experience to the table, having helped record albums by Cat Stevens, Nick Drake, Richard and Linda Thompson, The Incredible String Band and a long list of other accomplished artists.

Ideally, Hart and Grossman would have loved to be in the same room as Wood for the whole process, but going to Scotland would have been prohibitively expensive for an indie duo, especially if they also brought their hand-picked studio backing band with them. Instead, they consulted with Wood long-distance by phone and email, sending rough demos to get his ideas on arrangements for the songs before they even began recording and then keeping him in the decision-making loop the whole way.

The project was recorded and engineered at Minneapolis’s Creation Audio by Tom Herbers, who has worked with bands including Trampled by Turtles, Charlie Parr and Low. To flesh out their songs, the Sapsuckers brought in top-flight guest musicians, including Liz Draper (Okee Dokee Brothers, Davina and the Vagabonds), Chris Hepola (Cactus Blossoms), Randy Broughton (Gear Daddies, Trailer Trash), Toni Lindgren (Reina del Cid) and Patrick Harison (Patty and the Buttons).

“We got the dream team on this record,” Hart said.

All the musicians worked very hard preparing for the sessions, with all but Lindgren, a dazzling guitarist, coming to an intensive rehearsal before they hit the studio. Lindgren was the only musician they didn’t know before they started making the record, but she blew away any worries Hart and Grossman might have had about her.

“When she laid down her track for ‘Fools Were Made to be Broken’ and I heard how hard she had worked, it brought me to tears,” Hart said.

Grossman and Hart sent Wood the final tracks of the album for him to mix and they found out just how high his standards were. “He was like, ‘These vocals aren’t good enough,’” Grossman said. “He was right. It took me about a day of being upset before I could say, ‘Yeah, he’s right.’”

So they left their home, a rural outpost near Soldiers Grove, and went to Minneapolis to re-record all their vocals. It was a big bump in the road, but the two were committed from the start to this album being as good as it could possibly be.

“The whole idea of this album is that we really believe in these songs. I consistently believe in them more and more as the process continues,” Grossman said. “We feel that our songwriting is at the heart of our work, so that’s our focus on the new album.”

“In the songs we write melody is really important and song structure is really important,” Hart added. “We’re at an interesting transitional moment in music right now. Not to put anybody down, but a lot of pop music is kind of formless. You can have a pop song be two notes going back and forth.”

The Yellow-Bellied Sapsuckers: "Fools Were Made to be Broken"

Several of the songs on “Don’t Think About Tomorrow Tonight” would feel right at home in a 1950s “countrypolitan” playlist, including the title track. Meanwhile, some are honky-tonk gems, some sound like they could be polished-up lost field recordings from an Alan Lomax song safari, and a couple are silly novelty ditties, including “This Song,” which is a hilarious tune all about how they can’t remember the words to the song they’re singing.

One song on the album, “The Road to Outlaw Bridge,” gives a co-writing credit to Milon Peterson because most of the song’s lyrics are based on a poem he wrote for a 1961 highway department newsletter. The poem is about a crazy road Hart grew up on near Grand Portage in far northern Minnesota. The bridge was called “Outlaw Bridge,” Hart explained, because a “highway club” built it illegally.

“Nashville Hero,” the last song on the album (aside from the hidden track), is Hart having fun in the latest country style, inspired by a UK reviewer who got stuck on the Sapsuckers being referred to as “modern country.” “After seeing that, I’m like, I’m going to write a real modern country song,” Hart said. “It really is us making fun of us. It goes inside of the clichés of modern country and gets them just a little wrong.”

Grossman and Hart are people with a clear love and deep knowledge of the older forms of country music, but they aren’t ashamed to admit that they also love the kind of music you hear on country radio these days. They also love punk rock — both have played in punk bands in the Twin Cities — but that fits more with people’s general assumption that the Sapsuckers must be some kind of “hipsters” who could be expected to look down their noses at “modern country.”

“She’s a recovering hipster,” Hart said with a laugh, and Grossman admitted there was a time when she was adamant that she was never going to “sell out” and make music for money.

The Yellow-Bellied Sapsuckers aren’t buying into the value of hipster cred. “We want to be inclusive and friendly and not aloof and exclusive and hard to like and hard to define. I’m not interested in that,” Grossman said, adding that being inclusive means including hipsters. “We want people to know that what they’re hearing and seeing is the real us. This is really who we are. Every bit of it. That’s really special to me.”

The Yellow-Bellied Sapsuckers (Joe Hart, Nikki Grossman and their daughter, Neva Rose) don't tour in this antique vehicle, but they do hit the road with a 1962 camper.

The Yellow-Bellied Sapsuckers celebrate the release of their third album, "Don't Think About Tomorrow Tonight," with a concert March 24 at the Pump House Regional Arts Center. 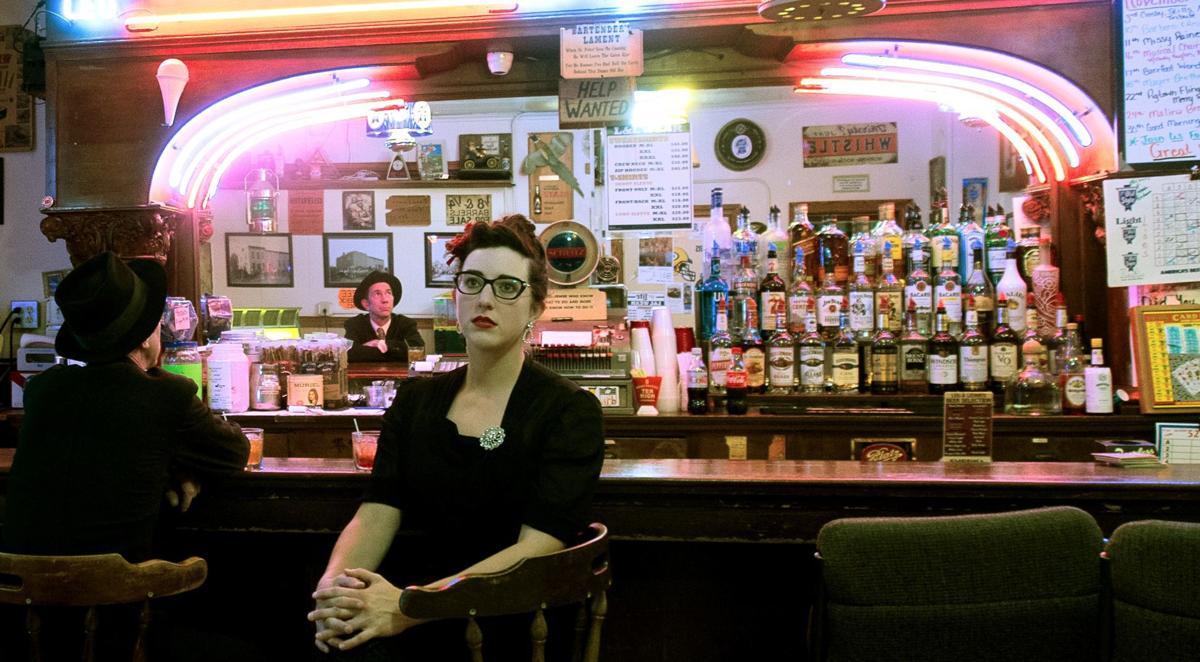 The image for the cover of the Yellow-Bellied Sapsuckers' new album was taken at Leo & Leona's Tavern and Dancehall.