A La Crosse man was charged Tuesday during his initial hearing after police found drugs, guns and thousands of dollars at his South Side home early last week.

A criminal informant notified police that he or she could buy methamphetamine from Kohls, known by the street name “Ghost,” on two separate accounts, Feb. 11 and Feb. 25, according to the police report.

The criminal informant said he or she purchased methamphetamine about five times from Kohls in the last month and Kohls charged about $100 to about $250 for an eight ball, 3.5 grams of methamphetamine, according to the complaint.

La Crosse County Circuit Court Judge Todd Bjerke granted police a search warrant, according to the police report, and investigators said they discovered a loaded gun, 550 rounds of ammunition, methamphetamine worth about $4,000 and $2,000 cash during the search at 1623 Johnson St.

The statewide mask order potentially sets up another legal battle between the Democratic governor and state GOP leaders, who successfully sued to strike down Evers' stay-at-home order earlier this year and have opposed a state mask rule.

These people have filed for a marriage license in La Crosse County:

A La Crosse man was injured early Saturday when his vehicle ended up in a construction zone in Vernon County. 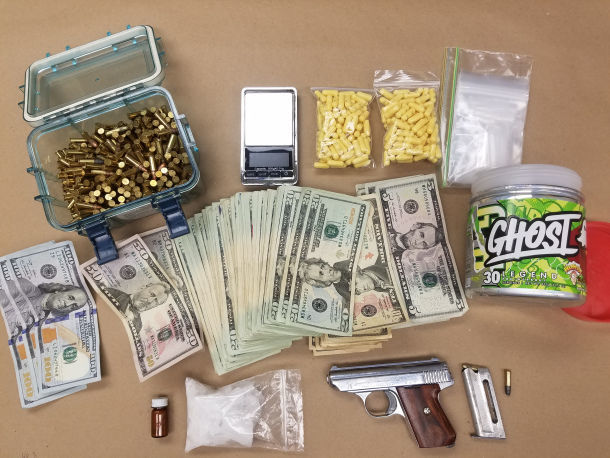 This photo, provided by the La Crosse Police Department, shows some of the materials seized after police executed a search warrant at 623 Johnson St.