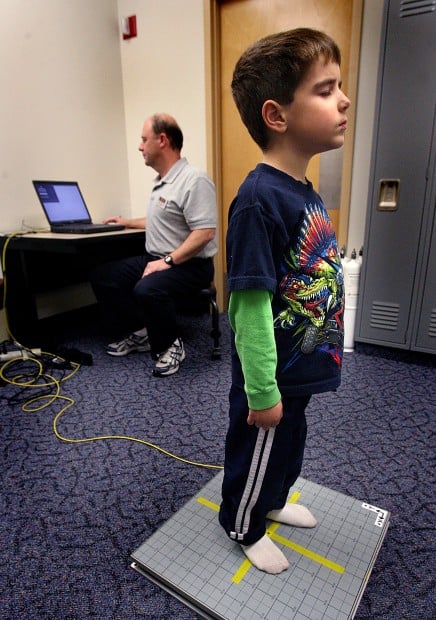 Carson Jones, 5, is tested for stability and balance by University of Wisconsin-La Crosse assistant professor of physical therapy John Greany in the human movement and physiology lab at the Health and Science Center. 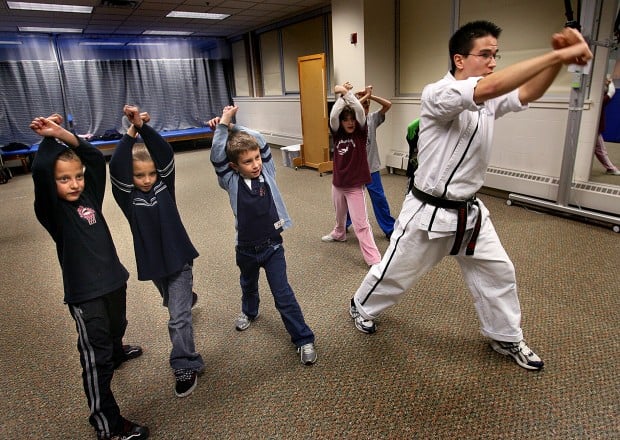 Parents of children with autism spectrum disorders sometimes look to activities such as martial arts to help their kids. They often find attention, motor control and behavior improve with martial arts.

“You’ll read about these children trying martial arts based on recommendations of a parents support network, but there hadn’t been a science to back it up,” said John Greany, University of  Wisconsin-La Crosse assistant professor of physical therapy.

Greany, who has a son with autism spectrum disorder, said he conducted an extensive search of the research literature and didn’t found any studies.

So at the urging of Fred Nicklaus, owner of the Nicklaus Martial Arts America Studio in La Crosse, Greany and two graduate students conducted an 11-week study of six high-functioning children with autism spectrum disorders.

The research, which was recently completed, showed improvements in the children including:

“These kids experienced progress, the type of progress often taken for granted by other kids,” Greany said.

Greany said he noticed a change in the behavior of his 7-year-old son, Thomas, one  of the children in the study.

He said his son improved his balance, motor skills, coordination, attention and running.

Sheryl Solberg said she noticed a difference in her 7-year-old son, Sterling, during the study.

“There was a calmness in him, and his overall strength improved,” Solberg said. “Before the study, he never wanted to stop and play at the playground. But then he wanted to go to the playground all time and started hanging from the monkey bars.”

“He used to drag his right toe, and he’s not doing it as much,” Jones said. “We also are working on his fine motor skills.”

“I noticed the kids’ listening skills and respect for the instructor really grew with the sessions,” said Katelyn Manske, a UW-L physical therapy graduate student from La Crosse.

Nicklaus said he knew that martial arts would help children with autism spectrum disorders because he has worked with kids with attention deficit disorders and other disabilities.

“It’s the consistency and structure with our martial arts approach,”

Nicklaus said. “We help them with the ability to concentrate and focus their attention in a very structured environment.”

He said martial arts helps these children communicate and talk more, and they are more willing to try new things, he said.

“Their self-confidence and self-esteem grow with martial arts,” Nicklaus said.

Nicklaus said he will consider a class for children with autism spectrum disorders or integrating them into his programs.

Greany said the weakness of his study was the small sample size, and he didn’t have a control group.

“We’re hoping to do a bigger study with a control group some day,” Greany said.

Sign up here to get the latest health & fitness updates in your inbox every week!

Dear Doc: I have migraines, have since I was 5 years old. I take medications, beta blockers, to help control them. They work, but not all the time.

How to stop glasses from fogging up when wearing face mask

It's a pesky problem: As soon as you strap on your cloth face mask and head out the door, your glasses fog up. But there's a simple fix for that.

The only way to safely escape the familiar interiors of our homes during this pandemic is to go outside into the fresh air, bask in the beauty of nature and get some desperately needed exercise and sunshine.

The best recommendation to soothe skin and limit irritation is to consider adjusting the way you do certain tasks. For instance, wear gloves while cleaning or prepping food or washing dishes.

Carson Jones, 5, is tested for stability and balance by University of Wisconsin-La Crosse assistant professor of physical therapy John Greany in the human movement and physiology lab at the Health and Science Center.

William Cornell, chief instructor at Nicklaus’ Martial Arts America, works with children during a class at the Health and Science Center. The physical therapy program at the University of Wisconsin-La Crosse has partnered with Nicklaus’ Martial Arts America to study the effects of martial arts on children with autism spectrum disorders.
© Copyright 2020 La Crosse Tribune, 401 N. Third Street La Crosse, WI | Terms of Use | Privacy Policy
Powered by BLOX Content Management System from TownNews.com.
You don't have any notifications.