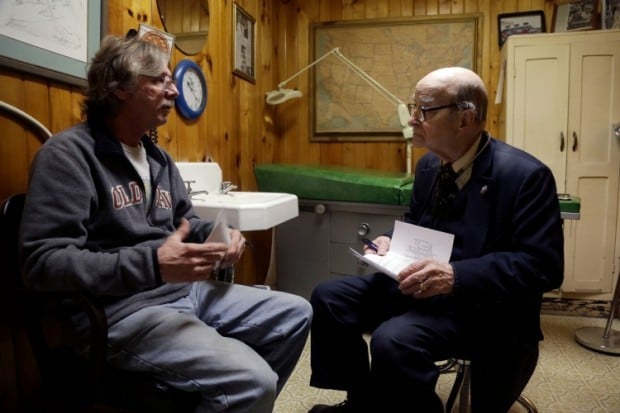 Dr. Russell Dohner, right, talks with patient Joe Logsdon about his high cholesterol in Rushville, Ill. Patients line up early outside his office just off the town square, waiting quietly for the doctor to arrive, as he has done for nearly 60 years. 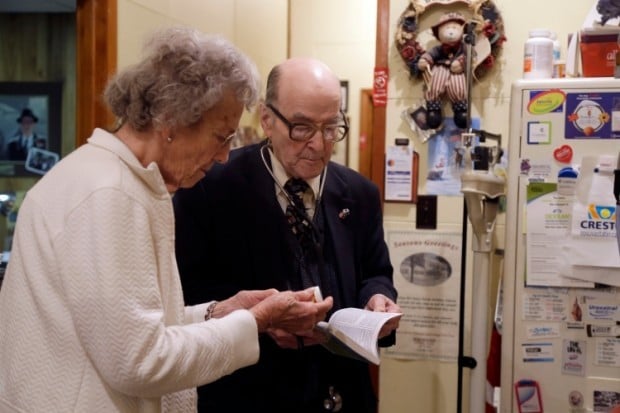 Dr. Russell Dohner, 87, talks with nurse Rose Busby, 86, about a patient’s prescription in Rushville, Ill. In an era of rising health care costs, he only charges patients $5 per office visit and doesn’t take insurance, saying it isn’t worth the bother. 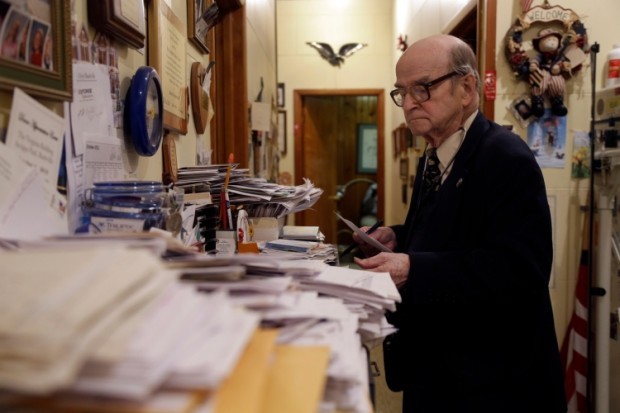 Dr. Russell Dohner looks over paper records between seeing patients in Rushville, Ill. His office has no fax machines, or computers or other forms of modern technology. Medical records are kept on hand-written index cards, stuffed into row upon row of filing cabinets.

By MARTHA IRVINE | The Associated Press

RUSHVILLE, Ill. — Patients line up early outside his office just off the town square, waiting quietly for the doctor to arrive, as he has done for nearly 60 years.

Dr. Russell Dohner is, after all, a man of routine, a steady force to be counted on in uncertain times.

Wearing the fedora that has become his trademark, he walks in just before 10 a.m., after rising early to make rounds at the local hospital. There are no appointments. He takes his patients in the order they sign in — first come, first-served. His office has no fax machines or computers. Medical records are kept on hand-written index cards, stuffed into row upon row of filing cabinets.

The only thing that has changed, really — other than the quickness of the doctor’s step or the color of his thinning hair — is his fee. When Dohner started practicing medicine in Rushville in 1955, he charged the going rate around town for an office visit: $2.

This in an era when the cost of health care has steadily risen, when those who don’t have medical insurance often forgo seeing a doctor. But not Dohner’s patients. He doesn’t even accept medical insurance — says it’s not worth the bother.

“I always just wanted to be a doctor to help people with their medical problems and that’s all it’s for,” the 87-year-old family physician said. “It was never intended to make a lot of money.”

Being a doctor, helping and providing a service — that has been his goal since he was a boy.

One of seven children, Dohner grew up on a farm just north of Rushville, outside the little town of Vermont, Ill. His father had hoped he’d take up farming, too. But young Dohner had other ideas, inspired by the town doctor who’d treated him when he had seizures as a child.

“I remember waking up and seeing the doctor there and thinking, ‘THAT is what I want to do,’” he said.

After serving in the Army in World War II, Dohner went to Western Illinois University, paying for his education with funds provided by the G.I. bill. In the early 1950s, he attended Northwestern University’s medical school. He had his sights set on becoming a cardiologist and thought about staying in the big city. But when a doctor in Rushville asked him to put off his heart specialist studies to practice medicine back at home, he agreed to do so, at least for a little while.

Then that doctor left town.

“So I couldn’t very well leave,” Dohner said. “That’s just the way it worked out.”

It was a sacrifice, yes. His young wife didn’t want to stay in such a small town, he says, and so their marriage ended. He never remarried and instead dedicated his life to his work, only leaving this small central Illinois town for medical conferences over the years, never taking a true vacation.

Even when the medical profession changed around him, he was always on call, ready to drop everything for a patient.

Carolyn Ambrosius, now 69, recalls how her mother went to an obstetrician in Springfield when she was pregnant at age 41, a rarity back then. The doctor there told her that either she’d survive or the baby would, but not both of them — a prognosis her mother refused to accept.

So she went back to Rushville.

“God’s going to take care of us — and Dr. Dohner,” Ambrosius remembers her mother saying.

And the doctor did, coming to their home each day to check on her during the pregnancy, and often staying to eat meals with the family after he’d completed his exams.

“I’m not sure if he remembers,” Ambrosius now says. (By now, the story is vaguely familiar to Dohner. He’s delivered a lot of babies in Rushville — “nearly the whole town,” by some estimates.)

But her mother did survive. “And my baby brother is now 52,” Ambrosius says, standing outside Dohner’s office on a crisp fall day after coming in for a check-up.

Stories like that are common around this town, a quaint place with cobblestone streets around the main square and majestic old mansions, some of which have seen better days. It’s the sort of place where patients give their doctor a gift or bring baked goods to say thank you. The walls of Dohner’s office hold items such as a homemade clock adorned with shiny beads, embroidery, cards, photos and paintings, including one of the doctor fishing, once a favorite pastime.

These days, though, it takes all his energy just to rise before 7 a.m. to head to the hospital, then to his office and back to the hospital, where the “Doctors’ Dictating Lounge,” named for his father, is set up with a desk and a cot for the occasional nap.

On Thursdays, Dohner closes his office at noon, but even then, he heads to the local nursing home to visit residents. On Sundays, he sees patients before church and stops by the hospital afterward.

He’s there, indeed, like clockwork. But as much as townspeople have grown to count on him, they also worry, as he’s become increasingly frail.

“He’s going to be dearly missed, not just in town but the three- or four-county area around the town, you know, because people come from all over just to him,” said Robert Utter, a 37-year-old emergency medical technician who’s been a patient since he was a young boy.

The doctor’s staff is aging, too. One of his nurses, Rose Busby, is 86. His secretary, Edith Moore, who grew up living next door to the Dohner farm, is 85.

“You been here before?” Moore asks many patients who step up to the office window to sign in throughout the day.

Though she may not remember everyone, she’s not surprised when they answer, “Yes.”

“Everybody in the world has been here before,” she said, somehow managing to find each patient’s index card in the filing cabinets that run down the hallway. “They’re full,” she said.

Moore is the one who collects the $5 fee when the patients leave — though a few times a day, Dohner tells her “never mind” and tries to quietly let a few go with no charge. Patients sometimes protest.

“Next time, I’ll pay $20!” one insists. But it’s clear that this patient and others are grateful, and often relieved.

Few doctors today could practice medicine the way Dohner does.

“I don’t hardly make enough to pay my nurses,” he concedes with a chuckle.

Most of his income comes from the farm that his family still owns and that is now run by a nephew. So, although he never became a farmer, the farming life made it possible for this country doctor to maintain his practice, his way.

And he intends to keep it going as long as he possibly can.

“As long as I can make it up here, I’ll help if I can,” says Dohner, who has no plan to retire. Medical colleagues keep a watchful, caring eye on him.

He notes that his mother lived into her mid-90s. “I guess I don’t know anything else to do,” he said.

During a visit to Culbertson Memorial Hospital, he stops to see Virginia Redshaw Wheelhouse, a 97-year-old patient. Her eyes open when she hears his voice. The doctor holds her hand and pats her shoulder.

Afterward, stammering but determined to get the words out, she said, “I pray he lives to be 99,” as her daughter-in-law, Cathy Redshaw, nods.

“There’s no words to describe what he does for people and the effect he has on people,” said Cindy Kunkel, a registered nurse at the hospital, where Dohner spends many evenings on “second rounds,” as she calls them.

She recalls working the night shift and seeing him pull into the hospital drive, often with a patient in his car.

“He may have his slippers on, but he would have his hat and his suit on,” Kunkel said, smiling. “And he would bring a patient in that needed to be put to bed and taken care of.”

Stephanie LeMaster, who grew up in Rushville, remembers interviewing Dohner for a school report when she was in fourth grade. Before then, she’d planned on being a nurse, like her mom and grandmother before her. But that interview changed everything, she says.

Dohner became a role model — and now she is a first-year medical student at Southern Illinois University.

“They tell me I should be the next Dr. Dohner, but I’m not sure I can live up to him,” LeMaster said. “He’s the only one like him.”

Cities with the largest homes

Cities with the largest homes

So you're one of 533 million in the Facebook leak. What now?

Here's what users should know about how the leaked data could be used, and how to protect themselves.

Dear Amy: My wife’s brother recently died. A couple of weeks after the funeral, his daughter (our niece) received a letter from a half-brother…

Dear Amy: A few years ago my cousin was absolutely entrenched in doing my father’s side of the family’s ancestral history (our fathers were br…

Dear Amy: My husband and I recently had our DNA tested.

Dear Amy: My husband is taking a company “buyout” this summer, thus retiring from his job.

Dear Amy: My husband and I recently welcomed our first child.

Dear Amy: My oldest daughter (age 26) is engaged to be “married.” After postponing the “wedding” due to COVID, they have picked a new date.

Dear Amy: I’m a woman in my mid-30s. My husband and I are indecisive about having kids. I’m not much of a “kid person.” He is definitely bette…

Dr. Russell Dohner, right, talks with patient Joe Logsdon about his high cholesterol in Rushville, Ill. Patients line up early outside his office just off the town square, waiting quietly for the doctor to arrive, as he has done for nearly 60 years.

Dr. Russell Dohner, 87, talks with nurse Rose Busby, 86, about a patient’s prescription in Rushville, Ill. In an era of rising health care costs, he only charges patients $5 per office visit and doesn’t take insurance, saying it isn’t worth the bother.

Dr. Russell Dohner looks over paper records between seeing patients in Rushville, Ill. His office has no fax machines, or computers or other forms of modern technology. Medical records are kept on hand-written index cards, stuffed into row upon row of filing cabinets.