SUNNYVALE, Calif. — A decade ago, a crowd gathered on the rough gritstone of central England to watch Alex Honnold propel himself up a sheer wall of rock.

But by the time the Sacramento, Calif., native had reached the summit, his erstwhile fans had dispersed, rushing off to aid an injured climber who had fallen nearby.

At the time, Honnold's audacious ascents, performed without the use of ropes or protective gear, were known only in climbing circles. Today he cannot escape enthusiastic crowds.

"Free Solo," the Oscar-winning documentary chronicling his heart-thumping climb of El Capitan in Yosemite National Park, has introduced Honnold and his sport to mainstream America. And as sport climbing prepares for its Olympic debut next year in Tokyo, he has become a crossover star on the scale of surfer Kelly Slater and skateboarder Tony Hawk.

But Honnold's newfound celebrity also has drawn critics who say he romanticizes high-risk climbs and sends a dangerous message to others, especially children, who might try to follow his lead.

"The question of whether I am a bad role model or bad influence on kids is totally fair," Honnold said in an interview recently at Planet Granite in Sunnyvale, Calif., where hundreds jammed into the 28,000-square-foot climbing gym to hear him speak.

A comment posted in March on Facebook captured these complaints. "This kind of thing makes me furious," the commenter wrote, in response to a friend's post saying she had just watched "Free Solo" and was irritated by Honnold's single-minded climbing pursuits. "Done improperly, this is a very dangerous sport, and anyone who influences young people by making this behavior look tantalizing is being reprehensibly irresponsible."

Honnold, however, said he doesn't think many people who watch "Free Solo" will be suddenly impelled to follow him in a ropeless climb up a sheer rock face. If they do, he said, they have missed the movie's message.

"On the balance, encouraging people to be intentional with their time and purposeful with their life is probably more important than encouraging someone to go climb without a rope," Honnold said.

Free soloing occupies an exalted place within the climbing world, admired for its purity. Only a few elite athletes dare to scale vertical walls without a partner and without being fastened in with ropes and harnesses.

But what Honnold and other pioneering extreme athletes have accomplished seems to both fascinate and alarm members of the public. People are drawn to risk takers who surf waves five stories high or jump off jagged cliffs, sailing like falcons in a "wingsuit." But when one of these endeavors leads to death, as it did four years ago when climbing great Dean Potter and a friend perished after BASE jumping in wingsuits from 7,500-foot Taft Point above Yosemite Valley, fascination often turns to contempt.

In an essay in Time Magazine written after the accident, Honnold wrote that Potter's death "has reminded me to reflect carefully on my own decisions about risk."

"There's a constant tension in climbing and really all exploration," he wrote, "between pushing yourself into the unknown but trying not to push too far."

Some experts on outdoor sports say that Honnold's solo climbs are not as dangerous as mountain treks like those that led 11 people to their deaths on Mount Everest's icy slopes in May. In April, three well-known professional alpinists died in the Canadian Rockies after they were caught in an avalanche, the family of one of the deceased climbers said.

"In terms of death-defying climbing, Alex is not in the same league as many of the top alpinists," said Bill Ramsey, a well-known rock climber and philosophy professor at the University of Nevada-Las Vegas. "There is less margin for error, but there is much less likelihood there is going to be an error."

But should people explore those margins in the first place? Frank Farley, a psychology professor at Temple University, said athletes such as Honnold speak to the human spirit and represent "an outcropping of that quality in us that we don't want to see extinguished."

Honnold, 33, downplayed his intrepid climbs in an interview, portraying himself as an avid climber with ropes and harnesses who sometimes enjoys a free-solo adventure.

"You can't have the Super Bowl every game," said Honnold, adding that he now mostly climbs with his girlfriend, Sanni McCandless, who in "Free Solo" is depicted as struggling with his death-defying pursuit.

The couple resides in Las Vegas, a contrast to when Honnold lived alone in a van while he prepared to be the first to solo the 3,000-foot face of El Capitan. He said now that he has settled down a bit, he has not intentionally cut back his risk-taking, but he no longer feels the need to prove anything.

Ramsey said he remembered a time when Honnold, then 19, returned to his home after attempting multiple risky Zion Canyon climbs in one outing.

But Ramsey advised his climbing friend, "If you keep having those, you're going to have a very finite time on this Earth."

In 2008, that possibility came home to Honnold on Half Dome. Near the top of a free-solo ascent of the Yosemite landmark, the climber stalled without good options to keep going, according to the book "Alone on the Wall." Honnold wrote in the book that he suffered a "moment of doubt ... or maybe panic" before executing a maneuver known as smearing, in which he pressed the sole of his climbing shoe directly on the slab, to boost himself up.

"The way to say this, I am guided by fear, I guess," Honnold said in an interview. "If I look at something and I am terrified by it, I'm probably not prepared."

Honnold said he is excited to watch the climbing in the Olympics, an indoor event featuring speed climbing, bouldering and lead climbing that showcases the technical know-how, endurance and physical strength of the sport without the element of fear that courses through "Free Solo."

But, Honnold said, he is not invested in increasing the sport's popularity, and it would not surprise him if it loses its appeal over the next 15 years.

"When that happens, I'll still be climbing and I'll say, 'Sweet, it is less crowded,' " Honnold said.

‘Am I really alive?’: Man buried for 50 minutes recalls rescue from avalanche

When the avalanche first caught Bill Fuzak, he fought to stay on top of the roiling mass.

“I wasn’t scared at all because I was too busy enjoying the view.” 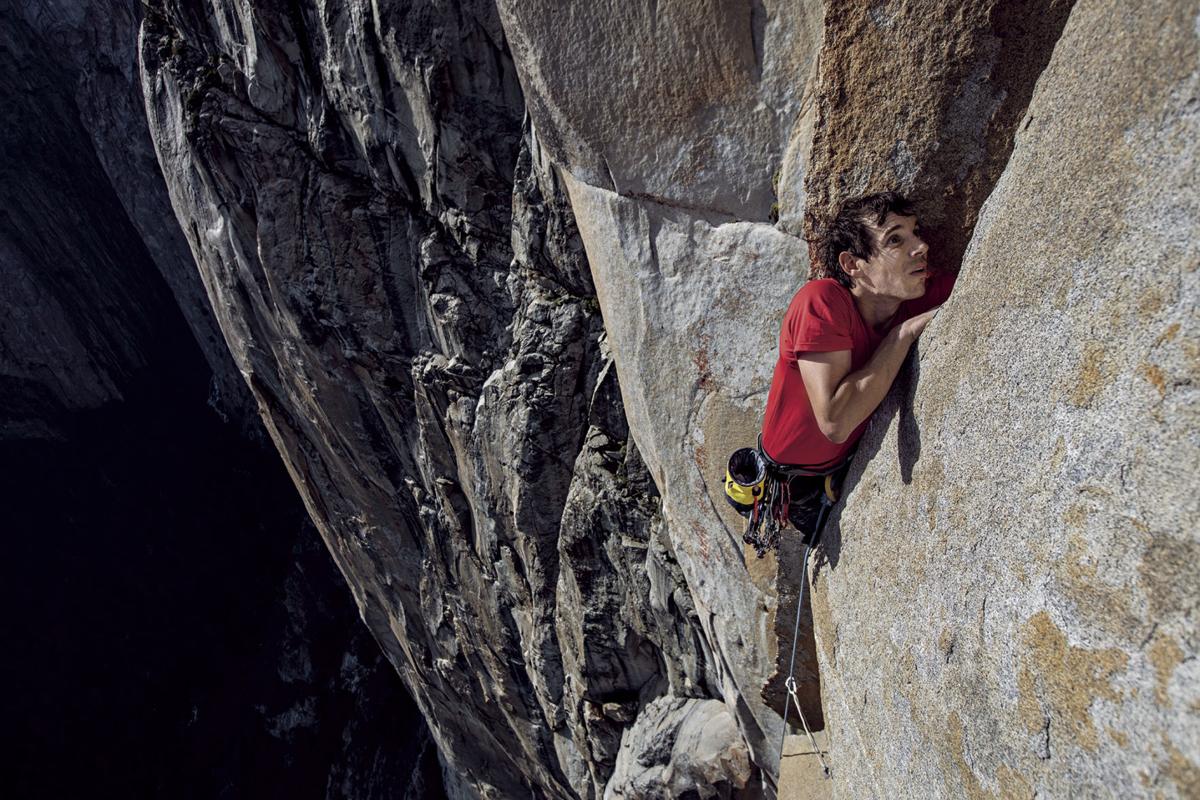 Attached to ropes, Alex Honnold practices climbing on a section of Freerider, the route he would take for a free solo up El Capitan. 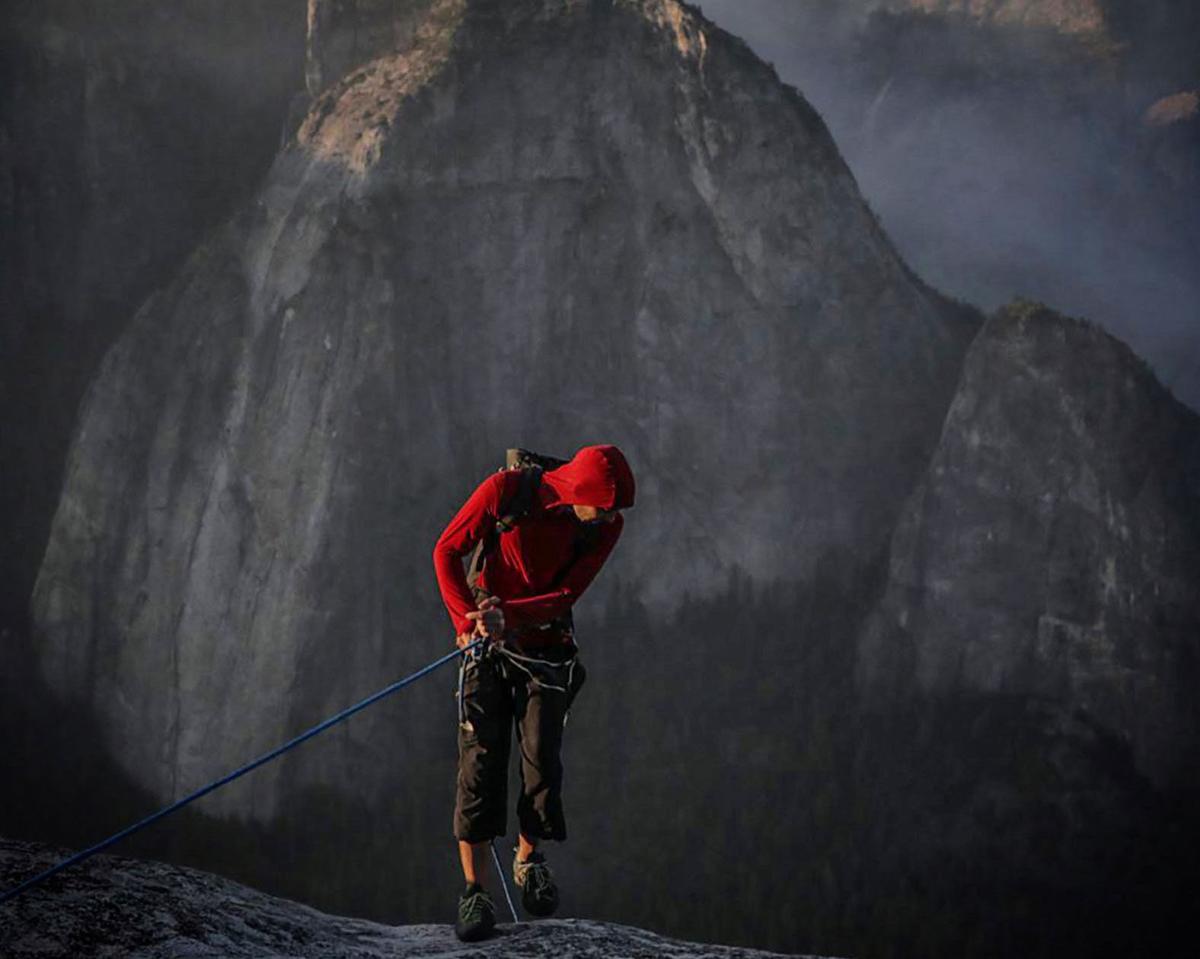 Alex Honnold rappels off the summit of El Capitan.