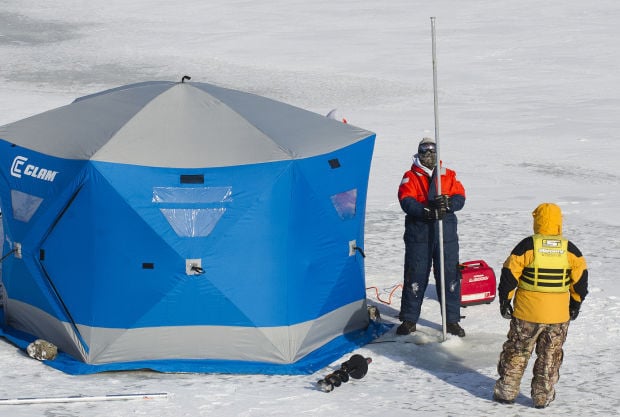 Winona County Dive Rescue and SOAR members, along with help from the Carver County Sheriff's Department, search for two men Monday, Jan. 6, 2014, believed to be involved in Sunday's fatal crash in the Mississippi River. 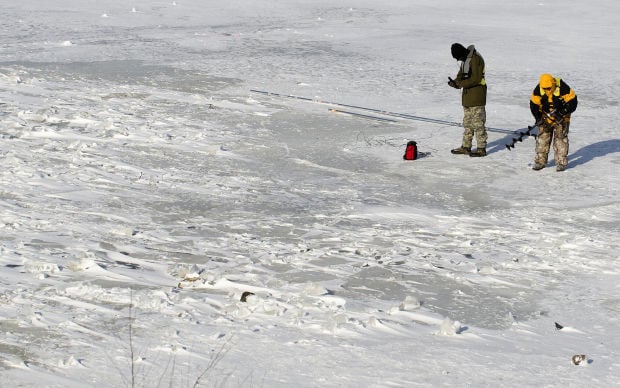 Winona County Dive Rescue members Jordan Benson and Jon Krofchalk drill holes and use a camera to search under ice Monday, Jan. 6, 2014, near the site where a SUV crashed into the Mississippi River on Sunday.

WINONA, Minn. — A third body was discovered Monday, a day after a car carrying four people plunged into the Mississippi River in downtown Winona, and searchers feared the fourth person would not be found alive.

Winona County Sheriff Dave Brand said responders about 3 p.m. recovered the body of Blake Overland, 28, of Stewartville, Minn., one of two men missing after Sunday’s crash. Work continued Monday throughout the day to look for the second, who Brand named as Andrew Kingsbury, 29, of La Crosse.

Responders declined to say whether the search for Kingsbury had turned into a recovery, but said they did not have evidence he was anywhere other than in the vehicle when it crashed, and still had not made contact with him Monday.

Mathew Patrick Erickson, 30, of Chatfield, Minn., was identified Monday morning as the passenger in the SUV that crashed into the river early Sunday morning after the driver failed to make the turn on Riverview Drive near Second and Huff streets. Both Erickson and the driver, Christina Lee Hauser, 36, of Winona were found seatbelted into the vehicle when responders pulled it from the river at about noon Sunday.

Despite the bitterly cold wind and weather Monday morning, the Winona County Dive Rescue and SOAR teams went back to the scene of the accident to search the river for the other two men, who were with Hauser and Erickson when they left a Winona bar at about 1:20 a.m. Sunday. Rescuers used underwater cameras, sonar equipment and a specialized radio-controlled underwater rover from the Carver County Sheriff’s Department to search the river near the scene.

Overland and Kingsbury were presumed missing Sunday afternoon after authorities located their vehicles but were unable to find the men at their residences, through contacting relatives or through their cellphones. Indications pointed to them having been in the vehicle Sunday morning, Brand said, and that they could have been ejected through the side or rear windows of the vehicle when it went into the water.

Brand planned to continue the search until dark Monday, as long as the volunteers could handle the long hours and weather conditions, and promised they would continue the search until Kingsbury is found. Members of the SOAR and Dive Rescue teams took turns warming up in their command vehicles Sunday afternoon, drinking coffee and grabbing sandwiches and potato salad for lunch while they searched. But the temperatures in the negative teens and wind chills 40 degrees below zero took their toll on men and equipment.

“We’ll only go as long as we can handle ourselves today,” Brand said. “But we’ll never quit or give up. We need to find these guys.“

The three men were friends since high school and had all graduated from Lanesboro High School, family members said Monday. Kingsbury was the youngest of four children. The baby of the family, but he didn’t act like one. He was responsible, hardworking, considerate and quiet and put family and friends first.

Kingbury cherished being an uncle — he had no children of his own — and would wrestle around with his 6-year-old, 3-year-old and 1-year-old nephews and would meet them at their level to play whatever they were interested in.

He was a carpenter by trade and by hobby, his grandmother recalled. He had intended to build her whatever she wanted, but he hadn’t gotten around to it by Christmas, so a few weeks ago he gave her a fleece blanket with cardinals on it. It was a nice Christmas visit, she said.

Blake Overland’s family declined to talk Monday, saying it was just too soon. Family members of Hauser and Erickson were unable to be reached. Hauser was an administrative assistant for Winona Health’s home care and hospice program, said program director Pam Slocum. “This was very sad news, and our thoughts are with Christina’s family,” she said.

After being removed from the river Sunday about noon, Hauser’s SUV was taken to a nearby heated garage for an investigation. The three recovered bodies have been taken to Rochester for autopsies.

This isn’t the first time a car has gone into the river in the same area of Riverview Drive.

Saint Mary’s University students Anne Locher, Mary Clare Karnick and Susan Wall, and graduates Jason Collins and Timothy Stapleton drowned March 1, 1997, after Stapleton’s SUV was speeding north along the drizzle-covered Huff Street, missed the same curve onto Riverview Drive and plunged into the river, according to reports at the time. Toxicology results showed alcohol might have played a role in that crash.

And it’s the second similar river-related fatal incident in the area in just a week.

Ellie Ahmann, a 21-year-old Winona State University student, died after her car went over an embankment south of downtown La Crosse, then crashed through thin ice on Isle La Plume Slough. She was westbound on Jackson Street sometime after 10 p.m. New Year’s Eve when her car failed to make a curve at Jackson Street and Norplex Drive and plunged down a 40-foot embankment onto the ice-coated Mississippi River back channel. Her car was located hours later after a transit bus driver saw tracks that led to the channel.

Details on that incident, including why she was driving in the area just hours after being expected to report for work to a downtown bar, are still unknown. Autopsy results are expected to be completed later this month.

Winona County Dive Rescue and SOAR members, along with help from the Carver County Sheriff's Department, search for two men Monday, Jan. 6, 2014, believed to be involved in Sunday's fatal crash in the Mississippi River.

Winona County Dive Rescue members Jordan Benson and Jon Krofchalk drill holes and use a camera to search under ice Monday, Jan. 6, 2014, near the site where a SUV crashed into the Mississippi River on Sunday.