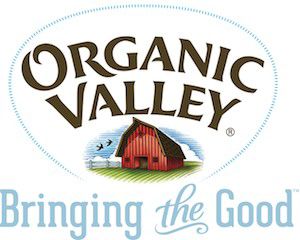 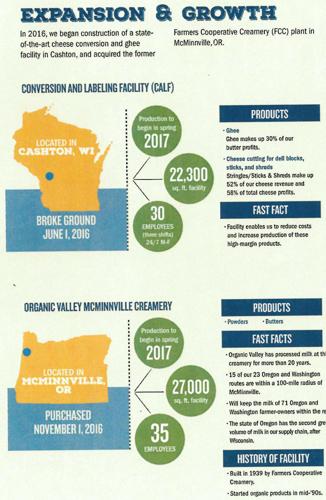 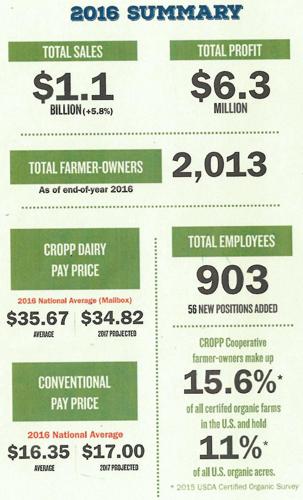 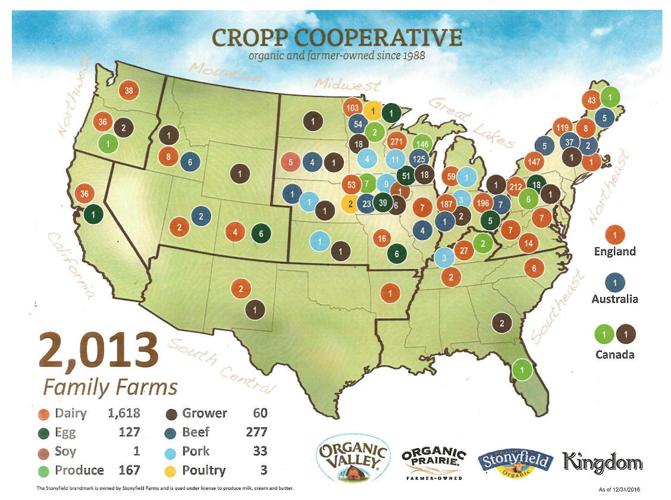 The quest is a two-edge sword, especially with extreme weather events skewing supply and demand, Marquez said during an interview after a press conference Friday at Organic Valley’s annual meeting in La Crosse.

“We want to support our farmers with higher prices,” Marquez said, at the same time that their start-up costs and land preparation can be more expensive and time-consuming than conventional.

However, the Cooperative Regions of Organic Producer Pools — Organic Valley’s parent organization — paid its members the average of $35.67 a hundredweight for milk, while the national average paid conventional farmers was $16.35.

Projections for this year are that the La Farge-based CROPP will average $34.82 a hundredweight, while conventional will run at about $17.

During the annual meeting at the La Crosse Center, more than 450 of the co-op’s 2,013 farmer-owner members heard CEO George Siemon report about another record-setting year.

“Two years ago, we were short on milk, and today, we’re long on milk — and eggs, too,” Siemon said. “You’d think we’d be good at it by now, after so many years,” but variables also buffet the market.

“But the organic market is strong,” permitting the co-op to continue its pattern of investments, including buying a powder/butter facility in McMinnville, Ore., and breaking ground on a new cheese-cutting and labeling and ghee production facility in Cashton on June 1.

“Now more than ever, it’s time to cooperate,” Siemon said. “Our strength has always been in our unity and belief in the collective good. In a world of divisiveness, cooperation continues to be the key to success.”

Next year will be the 30th anniversary of the co-op, which Siemon and a handful of other farmers founded in 1988 and now is the largest cooperative of organic farmers in the country.

CROPP’s addition of more than 250 family farms last year means it accounts for 15.6 percent of all certified organic farmers in the country.

One issue on the agenda at cooperative headquarters is the matter of succession, as the 64-year-old Siemon plans to retire in five years. Leadership is strong, he said, adding that he is working on a five-year plan.

A boon to that growth is expected to be a new 50-50 partnership with Dallas-based Dean Foods. The venture, announced in December, aims to take advantage of Dean’s massive milk distribution network to add Organic Valley products to refrigerated cases and shelves in more than 140,000 stores nationwide.

The enterprise is intended to propel Organic Valley products beyond their substantial niche in grocery stores nationwide and place them in drugstores, convenience stores, mom-and-pop markets and discount outlets such as Dollar Stores, company officials have said.

Organic Valley, whose sister labels include Organic Prairie, Stoneyfield and Kingdom, has made major inroads into the niche of products from grass-fed animals, most notably its trademarked Grassmilk. In turn, that has smoothed its way to launching Grassmilk yogurt, Siemon said.

About 10 percent of the CROPP members run grass-fed operations, he said.

Switching from conventional methods of farming to organic demands a steep learning curve, said Kevin Mahalko of Gilman, Wis., who runs a 450-acre grass-fed dairy operation with his parents, Ken and Mary, northeast of Eau Claire.

“You have to learn to work with nature in so many ways,” Mahalko said, noting considerations such as cow breeds that are most adaptable to grass grazing, biodiversity in fields and grazing management.

In addition, “the mineralization of soil is important to make sure the nutrients come through the grass,” Siemon said.

“As a farmer, I like to grow a product with omega numbers,” he said.

The increasing popularity of organic products as increasing numbers of consumers buy into the philosophy that they are healthier offers mixed rewards, Siemon and other co-op executives said.

The success has spawned competition, including some brands that claim to be organic with misleading labels, they said.

“I don’t worry about them,” Siemon said. “They’re a nuisance sometimes,” but Organic Valley has managed to fend off their challenges.

Into the breach has gone the cooperative’s line of Mighty organics, sold under the Organic Prairie label, which focuses on meats. They include products such as Mighty Bars and Mighty Beef Jerky.

“Like it or not, college kids will not sit down and drink three glasses of milk a day,” Goldstein said. “This is a product to fit their lifestyle.”

Without trying to create too much pressure on either Organic Valley or the Wisconsin Badgers, it’s worth noting that the University of Wisconsin is the first university in the country to feed its athletes organic breakfasts and dinners.

That is in keeping with the La Farge-based co-op’s longtime partnership with UW-Madison, said Lewis Goldstein, the co-op’s brand marketing vice president.

And if the eighth-seeded Badgers advanced to the Final Four during their late game Friday against fourth-seed Florida, let the debate begin on whether Badger Coach Greg Gard or Organic Valley CEO George Siemon might be in line for a dumping of Gatorade. 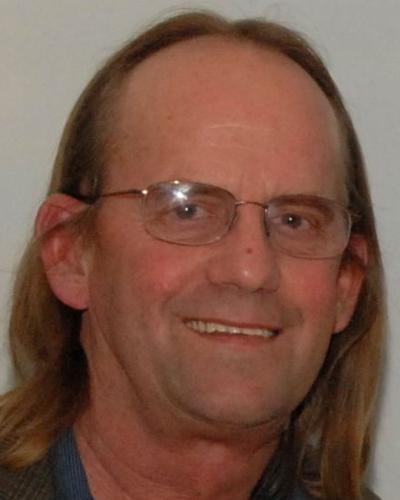