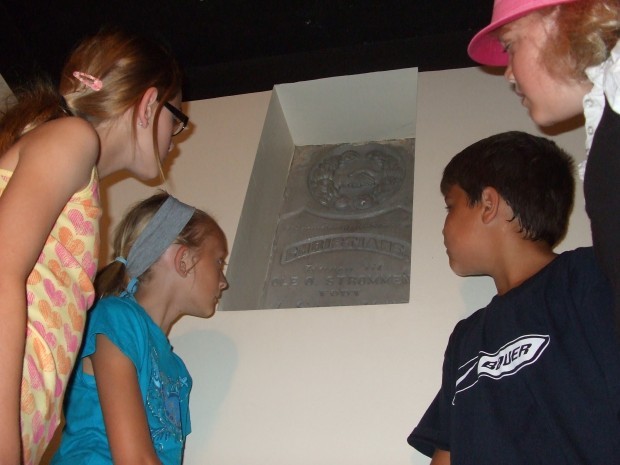 Students in the Sparta School District’s “Haunted Sparta” class examine a gravestone built into the basement wall of a business at 123 N. Water Street. From left are Brynn Weibel, Courtney Meyers, Matthew Jankowski, and Ke’ana Poirier. 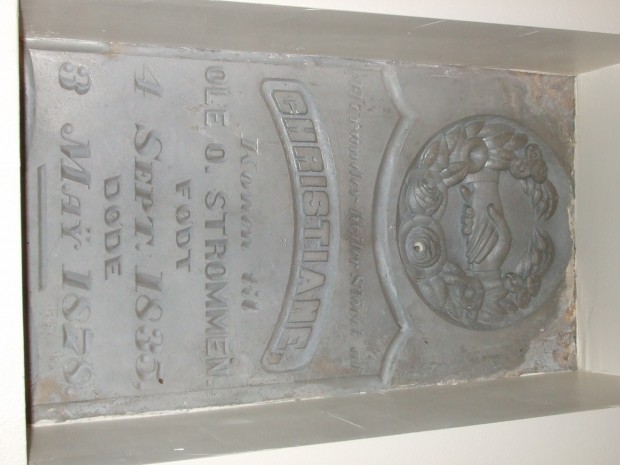 The building owner says there’s only speculation on how the gravestone of Christaine Strommen was embedded into the wall. It says she was born in 1835 and died 43 years later.

SPARTA - Ten-year-old Ke'ana Poirier says she saw Christaine Strommen in the basement of a Sparta business Wednesday. Problem is, Strommen's been dead since 1878.

The ghostly figure was wearing a gray dress that looked like a fancy nightgown, Poirier said. And after making eye contact, she says the figure disappeared into the wall.

Nine middle schoolers visited the basement of 123 N. Water St. to see Strommen's gravestone, which was mysteriously built into the wall several decades ago. The spooky field trip was part of the Sparta School District's "Haunted Sparta" summer class. Building owner Kevin Schmitz says there are several rumors circulating on how the stone got there. Some say the woman was buried in the street during a late 1800s road project. Others guess Strommen's family was passing through the town when she died but never picked up the stone for burial, leaving the builders not wanting to waste the expensive material.

Schmitz turned the basement into a privately owned men's club after his family bought the property five years ago. It had housed Natural Scentsations Soap Store.

"The previous owners said there's a ghost presence down there," he said. "We decided to have fun with it."

He's hosted Halloween parties and get-togethers, but only one friend claims to have felt the presence of a ghost. And not everyone saw a ghost on Wednes-day's trip. Most children just felt a brisk shot of cool air when walking by the gravestone.

"I heard that when it gets cold, that means there's a ghost," said 10-year-old Courtney Meyers.

Of course, the cool breeze could be attributed to the air conditioner vent above head. But that's not as much fun to imagine.

"Get me out of here," squealed Brynn Weibel, clutching the arm of a friend.

The girls giggled and skipped over to explore the back part of the room, where they heard people have seen moving shadows.

The class is centered on a book written by Sparta resident Joe Cook called "The Haunting of Sparta: Mysteries in a Small Town." It features 16 area locations that some residents have deemed haunted. In the class, students take walking trips to some featured areas. They also read stories about ghosts, complete spooky wordfinds and write their own scary stories.

Meadowview Middle School teacher Liz Sullivan says it's a good way to get children reading and keep minds active during the summer months.

"If there's things you can't explain, let your imagination go and have fun," she said. "Kids are so curious."

Students in the Sparta School District’s “Haunted Sparta” class examine a gravestone built into the basement wall of a business at 123 N. Water Street. From left are Brynn Weibel, Courtney Meyers, Matthew Jankowski, and Ke’ana Poirier.

The building owner says there’s only speculation on how the gravestone of Christaine Strommen was embedded into the wall. It says she was born in 1835 and died 43 years later.