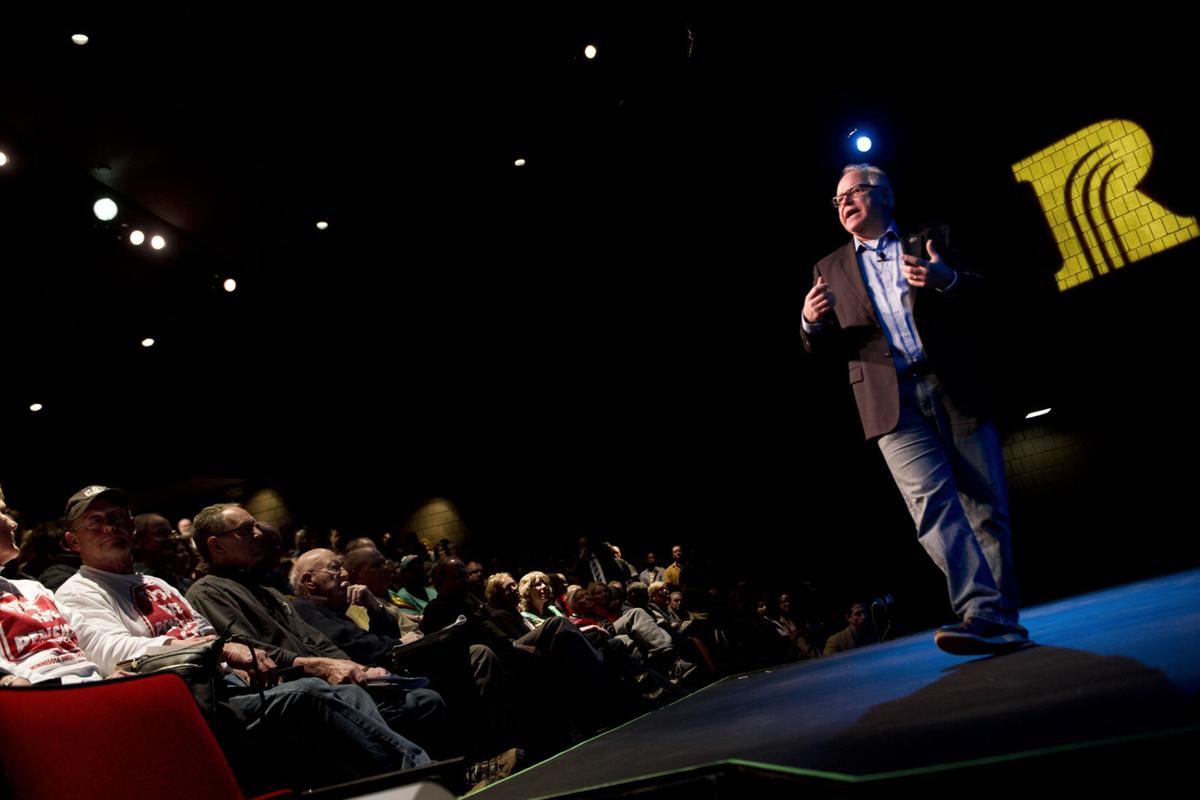 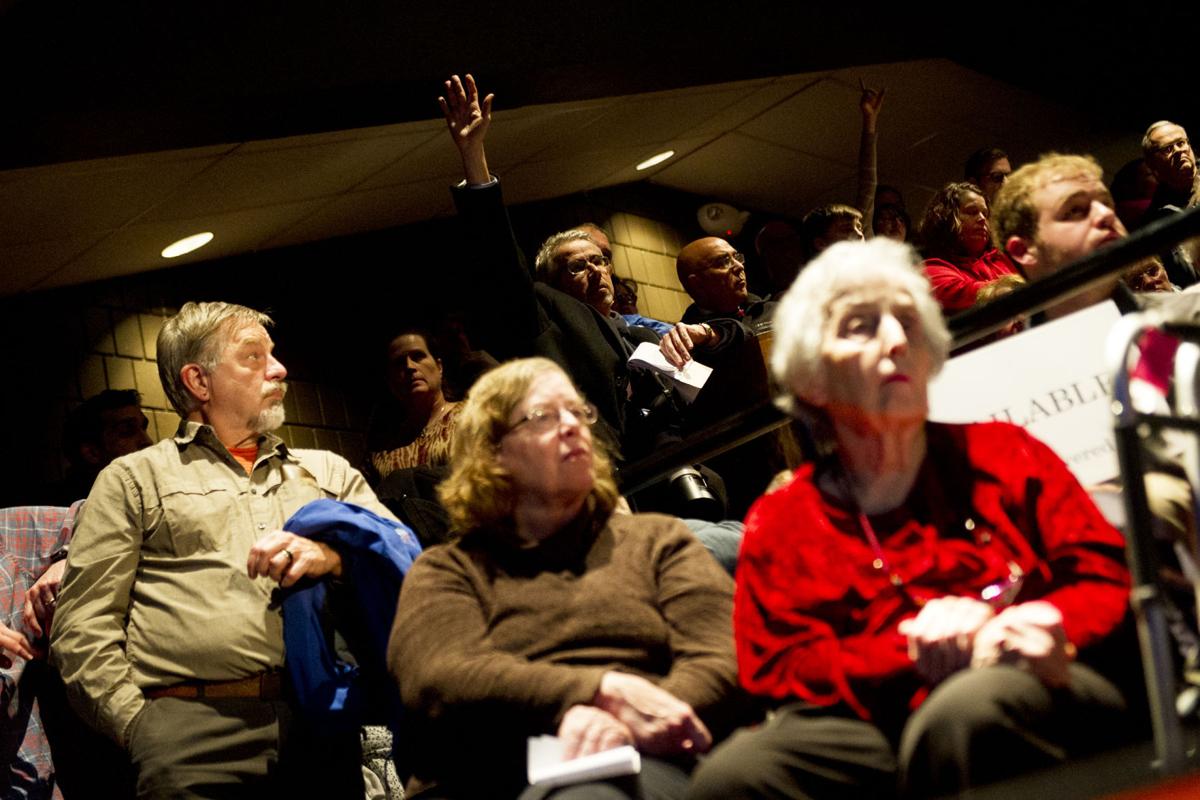 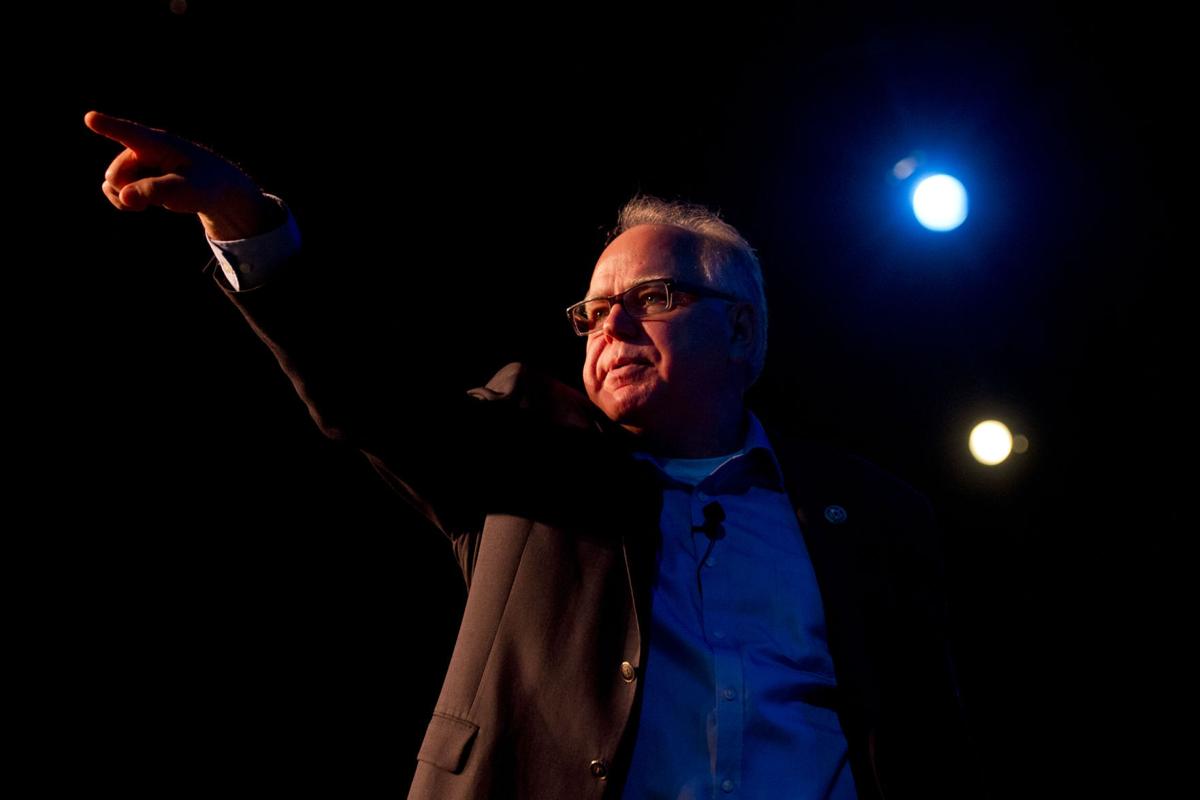 U.S. Rep. Tim Walz points to an attendee for the next question during a town hall meeting in February at Rochester Community Technical College. 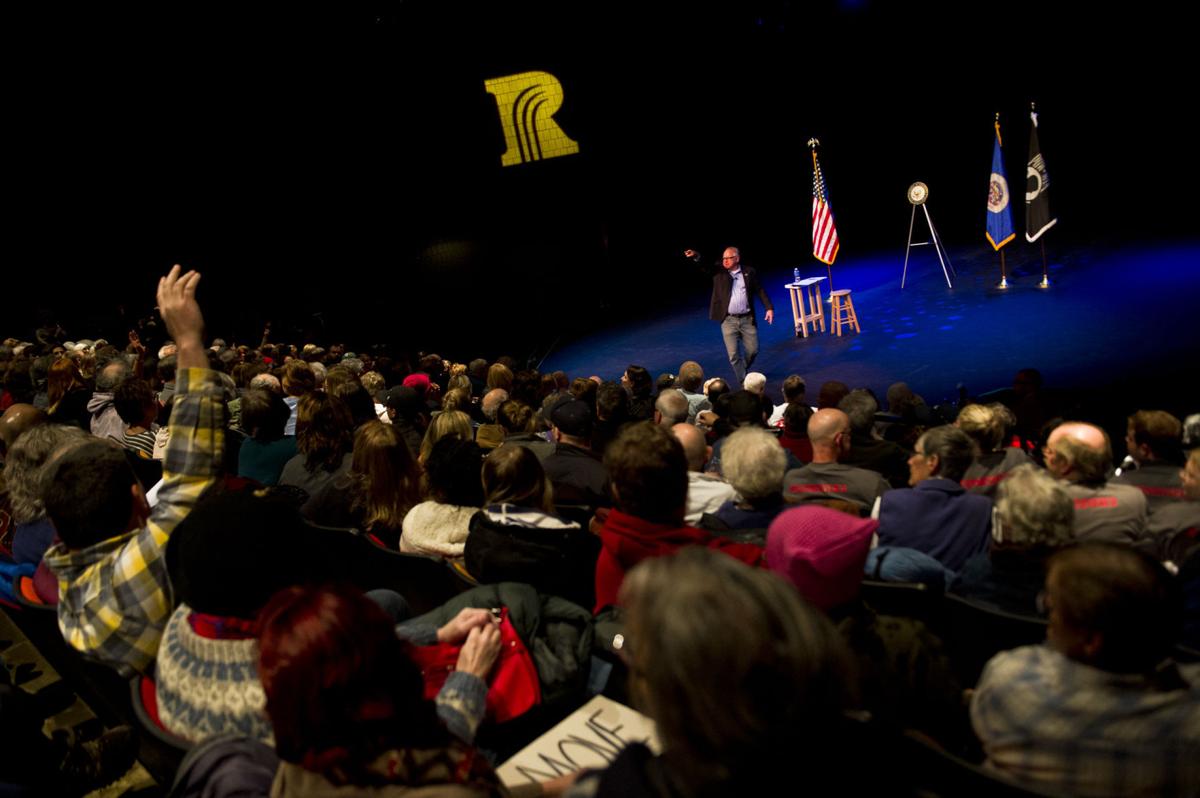 U.S. Rep. Tim Walz points to an attendee for the next question during Thursday night’s town hall meeting at the Rochester Community Technical College. 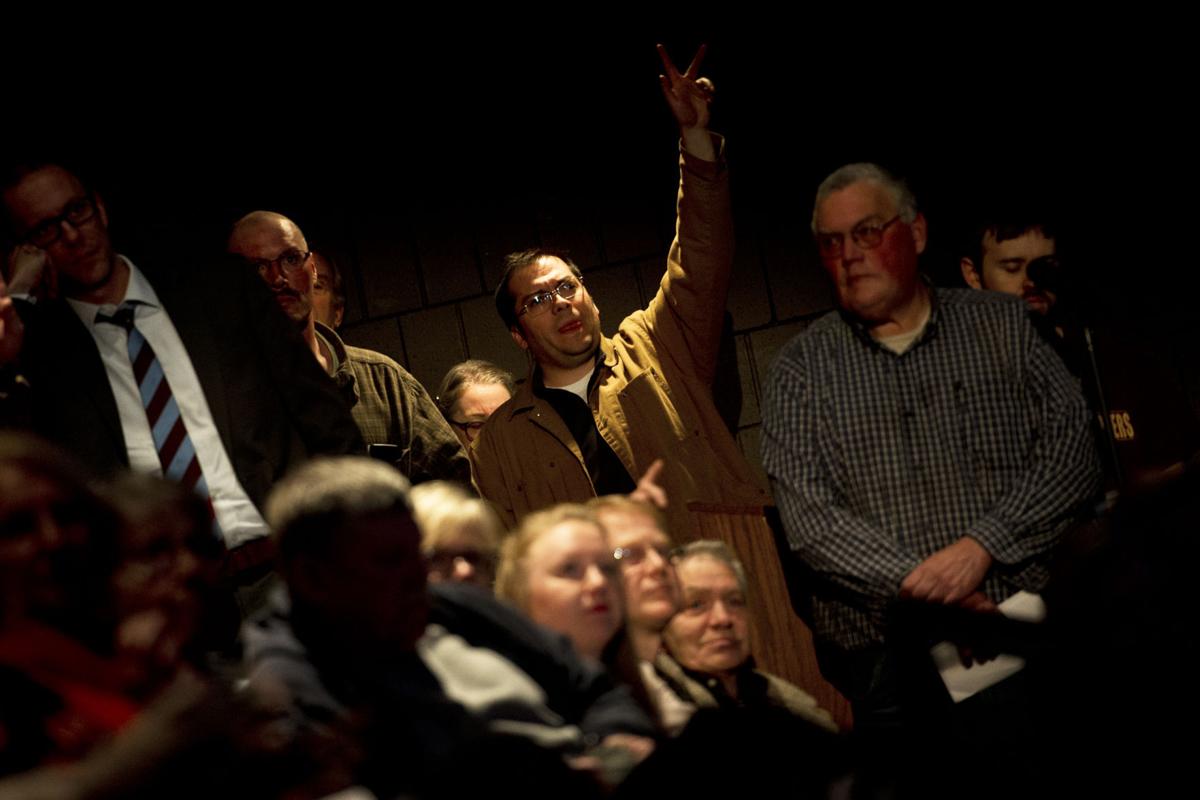 ROCHESTER, Minn. — U.S. Rep. Tim Walz got a standing ovation with his opening line at a town hall meeting Thursday night in Rochester.

The response may have been because of his political affiliation, or the respect he carries across his southern Minnesota district from Democrats and Republicans alike — but most likely because he had the courage and conviction to show up and speak face-to-face with constituents.

Amid the turmoil of the Trump administration’s early days, federal lawmakers are facing hostile crowds across the nation, and some have chosen to ignore or not attend town hall meetings scheduled during their first 2017 break. Walz instead moderated a mostly friendly audience and fielded questions on everything from national security policy to LGBTQ protections to campaign finance reform.

The Democrat stressed moderation and attempting bipartisanship in response to many of the questions, referring several times to false choices presented by politicians of both aisles.

When referring to preserving natural resources, for instance, Walz referred to the wild spaces of national forests and protected land as “one of our great legacies,” but said that conservation and economic development are not mutually exclusive.

“We should do economic activity in a responsible manner,” Walz said.

The key, Walz said, is to never act in a “reckless manner.”

“You can protect this nation,” Walz said. “But you can do so with something that doesn’t do a blanket coverage, generalizing an entire religion.”

On other security issues, he supported a bipartisan measure in the House to investigate Russian involvement in the 2016 election. The Senate is also proposing investigation into the matter, an effort spearheaded by Sen. John McCain, R-Arizona.

While he encouraged his colleagues to “answer the question,” Walz said if an independent investigation found nothing, they should drop it.

“It does not have to be a witch hunt,” Walz said.

He also said he supported fixing the health care reforms enacted by the Affordable Care Act, but insisted it needed to be done in a way that preserves the good aspects of the bill expand and promote access to health care.

“What I cannot vote for is something that pulls off the protection without something to replace,” Walz said.

He also pushed for maintaining Social Security and floated a number of different ways to increase funding, including raising the wage cap and or taxing wages over very large amounts, like $5 million.

Around the country during this congressional recess week, several Republican lawmakers have faced protests and tough questions about health care and other issues.

Some have gone as far as avoiding the events, which have a tone that echoes tea party groups that rallied against President Barack Obama and his health care overhaul in the summer of 2009.

Comparatively, the response in Rochester was measured, according to several attendees, with minimal disruption, talking over one another or jeering.

Larry and Cindy Unger of Rochester said the event was pretty tame, but that Walz also had a lot of support in the area and knew his audience.

“It was a good tone,” Larry said. “He wants to be bipartisan.”

Cindy said Walz responded equally to all sorts of questions.

“I thought he was balanced,” Cindy said.

Walz narrowly won his sixth term in Congress in November, winning with just more than 2,500 votes. He’s a moderate Democrat who has done well in a politically moderate district, since ousting Gil Gutknecht in 2006.

Walz campaigned with creating a functioning Congress as a high priority for him.

Thursday night, he spoke on a number of issues he has worked toward, or has promoted in the past, including non-partisan redistricting, campaign finance reform, and driving bipartisanship in Congress through returning to a system of committee review for proposed legisation, similar to that in many state legislatures.

A process that allows bills to go through subcommittee and committee processes would increase cooperation, Walz said.

“It would ratchet down the angst, and people would believe that we can do things again,” Walz said.

Other priorities Walz listed for this year included fixing the Affordable Care Act, more popularly referred to as Obamacare, and tax reform.

In a short introduction before he answered questions for several hours, Walz said that town hall meetings and interaction between legislators and citizens was what democracy was supposed to look like.

“Democracy is a participant sport,” Walz said. “We do it together, we make the decisions.”

"Democracy is a participant sport. We do it together, we make the decisions."

People waited for more than two hours to have their voice heard at a town hall forum Wednesday.

TREMPEALEAU — As the Packers and Cowboys kicked off earlier this week, a couple of dozen regulars arrived at the Vet’s Bar with potluck dishes…

PRAIRIE DU CHIEN — She tugged 13 envelopes from a cabinet above the stove, each one labeled with a different debt: the house payment, the stud…

Kathleen Parker: The CPAC has turned into a comedy club—but that would be insulting to comedy clubs

Remember when conservatism meant deep thinkers and big ideas? Get over it.

As if on cue, riots broke out in a heavily immigrant suburb of Stockholm as soon as the media mocked President Donald Trump for a vague warnin…

WASHINGTON — Almost exactly a year ago, I suggested a rule of thumb for evaluating candidates’ economic agendas: The more growth a politician …

A representative from the office of U.S. Rep. Ron Kind, D-La Crosse, will be in Tomah Wednesday, March 1 for office hours.

U.S. Rep. Tim Walz points to an attendee for the next question during a town hall meeting in February at Rochester Community Technical College.

U.S. Rep. Tim Walz points to an attendee for the next question during Thursday night’s town hall meeting at the Rochester Community Technical College.