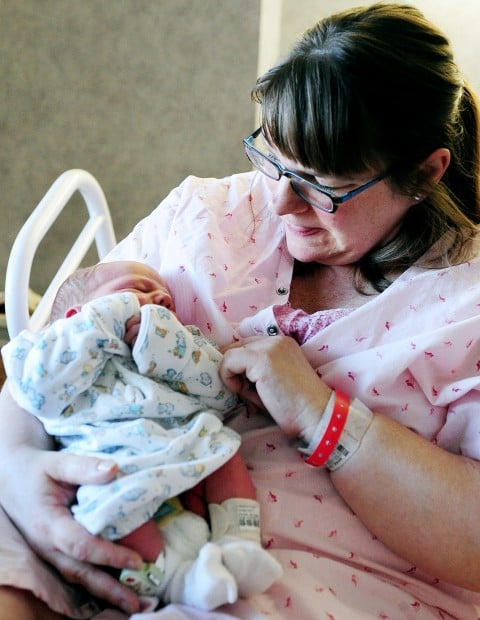 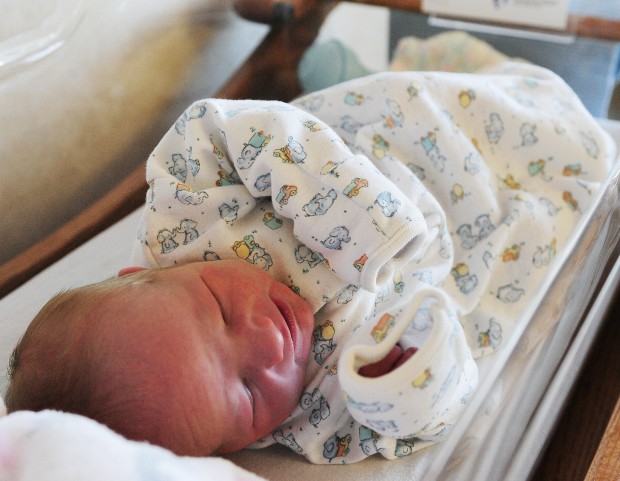 Tucker Riner was born Friday night at 10:02 p.m. at a weight of 7 pounds 9 ounces and a height of 20 inches. (Rory O'Driscoll/La Crosse Tribune)
By TERRY RINDFLEISCH |

Lori Riner is a mom again — at age 48. The Sparta woman gave birth Friday to a boy and became the oldest woman to deliver at Franciscan Skemp Medical Center without the aid of fertility treatment.

“What’s amazing is her pregnancy is quite rare,” said Dr. Gokhan Anil, a Franciscan Skemp obstetrician-gynecologist. “She definitely is one of my most mature patients.”

Just 1 percent of women 42 or older get pregnant. Pregnancies later in life increase the risk for complications such as genetic defects and prematurity, and high blood pressure and other medical problems for the mother.

At first, Lori thought she was going through menopause. But, she said, “menopause doesn’t kick.”

She asked her husband, Sonny, to sit down when she broke the news about the pregnancy.

“Of course, I was shocked,” Sonny said. “But I was happy. Most couples would be devastated, but we were not devastated.”

The couple has been married four years and have children from previous marriages in their 20s and 30s, in addition to their granddaughter.

Dr. Anil thought Lori’s age was a typo when he reviewed her chart.

Lori had genetic counseling and testing at Mayo Clinic in Rochester, Minn., to detect any early problems in the pregnancy.

“I wanted to know if I had a child with Down syndrome, not to terminate the pregnancy but to be prepared,” Lori said. “We were definitely

Tests showed everything was normal. She had a surprisingly healthy and normal pregnancy, delivering vaginally one week after her due date. The chance for a full-term pregnancy was only 1 in 20.

“I was really happy she got past 39 weeks, because we knew the baby would have fewer problems and she was more likely to have a vaginal delivery,” Anil said.

“He can call me grandpa or dad,” Sonny joked.

“When I’m 50, Tucker will be 1 year old, and he’s cutting into our casino money a lot,” Lori kidded. “But seriously, we don’t feel our age. We’re excited to start a new adventure.”

A cake decorator at Walmart in Sparta, Lori said she will take some time off  work until early May. Sonny has worked as military technician at Fort McCoy.

“Tucker is here for a reason, even if it’s just to mow the lawn,” Lori said with a hearty laugh. “With all the risks we faced, he’s here for a good reason.”

Tucker Riner was born Friday night at 10:02 p.m. at a weight of 7 pounds 9 ounces and a height of 20 inches. (Rory O'Driscoll/La Crosse Tribune)
© Copyright 2021 La Crosse Tribune, 1407 St. Andrew St., Suite A100 La Crosse, WI | Terms of Use | Privacy Policy
Powered by BLOX Content Management System from TownNews.com.
You don't have any notifications.