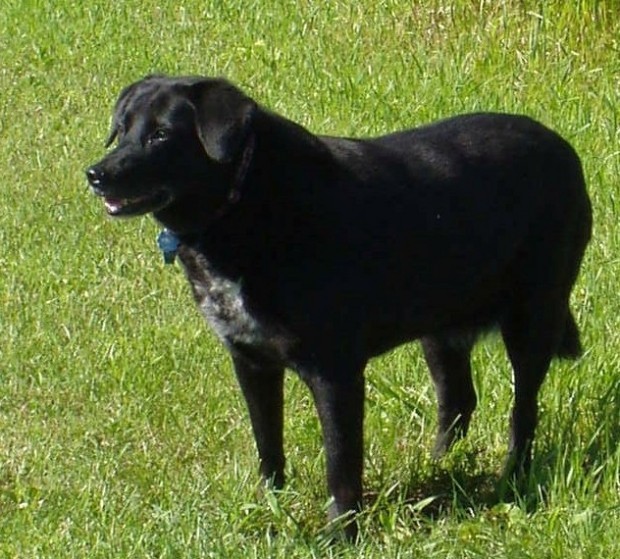 Goldie, a black Labrador retriever, was discovered trapped at the bottom of a sinkhole after disappearing six days earlier. 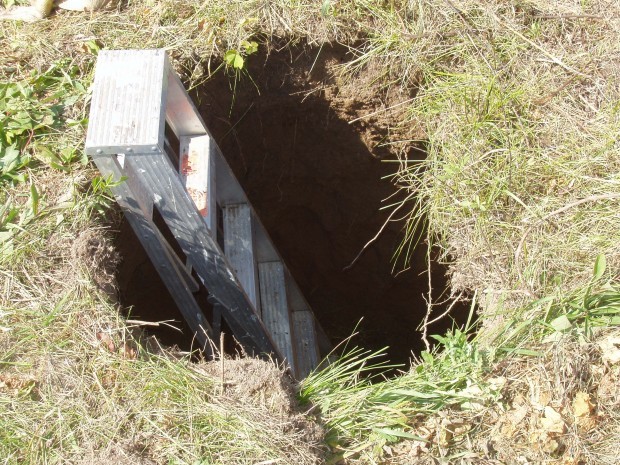 Mary and Jeff Aderman found their dog Goldie at the bottom of this sinkhole.

Mary and Jeff Aderman's black Labrador retriever was missing. Goldie, the timid dog they adopted 13 years ago after it was found wandering on Christmas Eve, had simply vanished Sept. 13 while Jeff was working in the couple's vineyard south of Viroqua.

Goldie had long ago given up her wandering days and, like most Labs, never missed a meal.

"We were devastated," Mary said. "She's our family."

For six long days, they heard nothing.

Then, on Monday afternoon, Jeff was back collecting grapes in the vineyard when a strange sound came from the meadow where they'd searched before.

"All of a sudden, he saw a hole," Mary said, about six feet deep and narrow.

And at the bottom was Goldie.

"There she was looking up at me," Jeff said. "She had been in that hole for six days as far as we know."

Somehow, the couple's resilient dog survived the elements, without food and water for almost a week, at the bottom of a sinkhole the couple didn't know existed.

"It's a miracle. It's truly a miracle," Mary said. "We really thought we had lost her."

The couple worked to widen the hole with a shovel while their second dog, a border collie, looked on and whined for Goldie. They sunk a ladder into the hole and lifted Goldie out.

"She wanted out," Mary said. "She made a beeline to the house."

Goldie emerged thirsty and hungry but otherwise unscathed. Mary nursed her with water, rice and food.

Over 80% of the U.S. population is currently eligible for COVID-19 vaccination, and yet just 65.8% of those 12 and older are fully inoculated …

The following people have been charged with felonies in La Crosse County Circuit Court.

As the delta variant leads to coronavirus case spikes — and deaths — nationwide, workplaces, health care entities and even some schools are is…

Here's how bad nuclear war would be for our planet

Here's how bad nuclear war would be for our planet

Goldie, a black Labrador retriever, was discovered trapped at the bottom of a sinkhole after disappearing six days earlier.

Mary and Jeff Aderman found their dog Goldie at the bottom of this sinkhole.