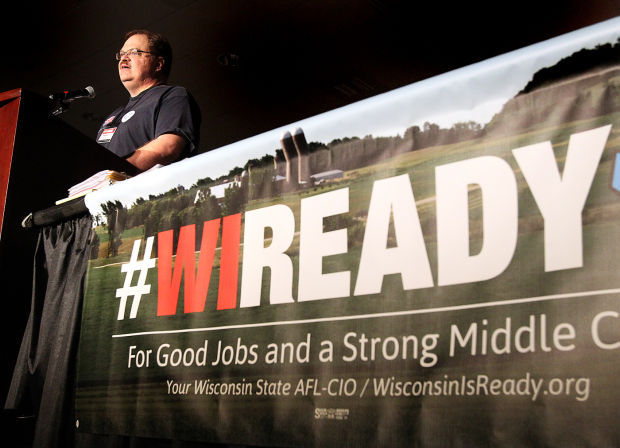 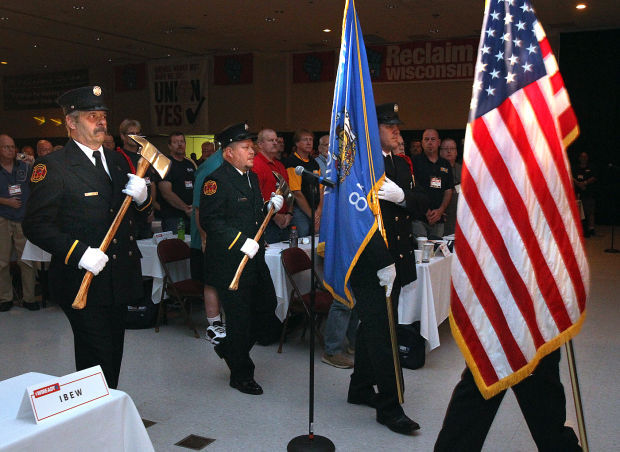 The Professional Fire Fighters of Wisconsin color guard presents the colors Monday to open the 28th Biennial Convention of the Wisconsin AFL-CIO at the La Crosse Center.

“We have a choice — and I don’t know about you, but I’m sick and tired of electing people who don’t represent workers,” Trumka told about 200 delegates to the state AFL-CIO’s 28th biennial convention, which began Monday at the La Crosse Center.

“This is our country, and this is our time, and it’s time we took it back for the workers of our country,” said Trumka, whose half-hour talk was interrupted several times by cheers and applause.

Wisconsin unions that resisted Walker’s programs “inspired America” to a “new populism” that backs raising the minimum wage and increasing pay for all workers, regardless of union membership, Trumka said.

“The labor movement is perfectly positioned to lift our communities and raise wages,” he said.

“Raising wages will fuel a strong economy,” giving workers the wherewithal to resume buying, he said.

Walker favors billionaire donors such as the Koch brothers, and “he’ll keep caving to their right-wing agenda,” Trumka said.

The state AFL-CIO has endorsed Walker’s Democratic rival, Mary Burke, and the union’s 200,000 members statewide must redouble their efforts to secure her election Nov. 4, Trumka said.

“I’m going to give you tough love now,” he said, noting that Wisconsin locals have not fulfilled their commitment to releasing staff members to work on Burke’s campaign and for the election of other Democratic candidates, working shifts outside of company gates and staffing phones to electioneer.

“If you wake up on Nov. 5 and things haven’t changed, the next four years will be like the last four years,” Trumka said. “This guy is coming after us.”

The Wisconsin election has national implications, because Walker “was the first to double down on workers,” and GOP anti-union efforts have expanded because of his success, he said.

Burke is scheduled to speak this morning at the convention, which lasts through midday Wednesday. Other speakers will include including U.S. Sen. Tammy Baldwin, D-Wis., and Democratic Wisconsin attorney general candidate Susan Happ.

A 30-year-old La Crosse woman is being held in the La Crosse County Jail on a $1,000 cash bond after being accused of breaking into three stor…

Two people are in custody and one is still being sought for their roles in an alleged drug purchase last year in La Crosse.

The first case of monkeypox has been confirmed in La Crosse County, with statewide infections at 31.

Bail has been reduced for an 18-year-old Ontario, Wis., man accused in the homicide of Storm Vondrashek.

ONALASKA — A Florida developer plans to acquire, remodel and add on to the former Shopko department store at 9366 State Road 16 in Onalaska — …

ONALASKA — The grand opening of the Chick-fil-A restaurant at 3015 S Kinney Coulee Road in Onalaska will be on Sept. 8, the new restaurant ann…

A 28-year-old La Crosse man is being held in the La Crosse County Jail on a $2,000 cash bond after allegedly fleeing police Aug. 2.

Two arrested after altercation with police in La Crosse

Two individuals were arrested Aug. 4 after an altercation with officers.

The Professional Fire Fighters of Wisconsin color guard presents the colors Monday to open the 28th Biennial Convention of the Wisconsin AFL-CIO at the La Crosse Center. 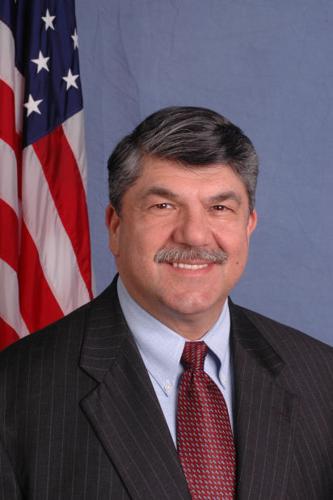