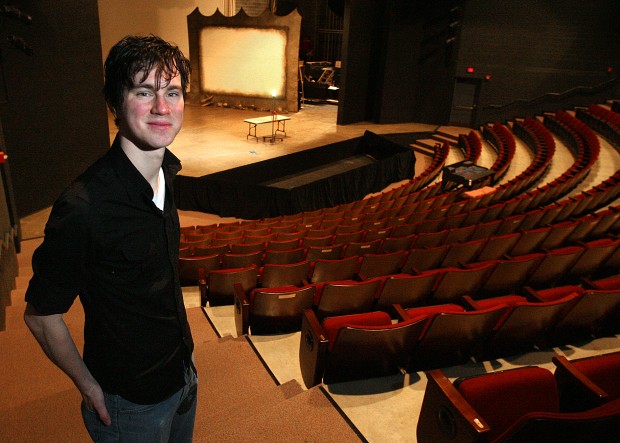 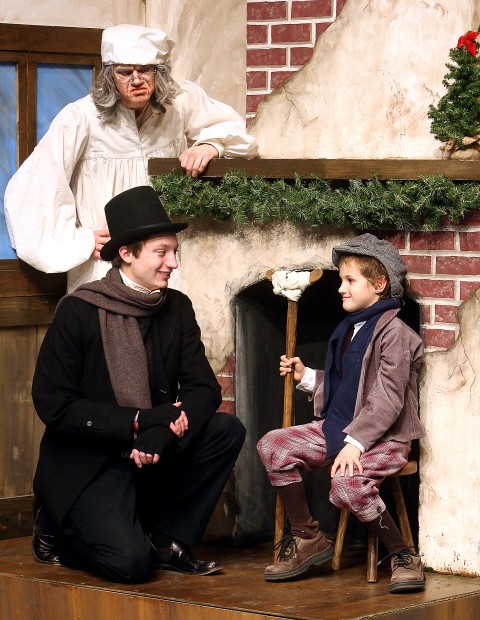 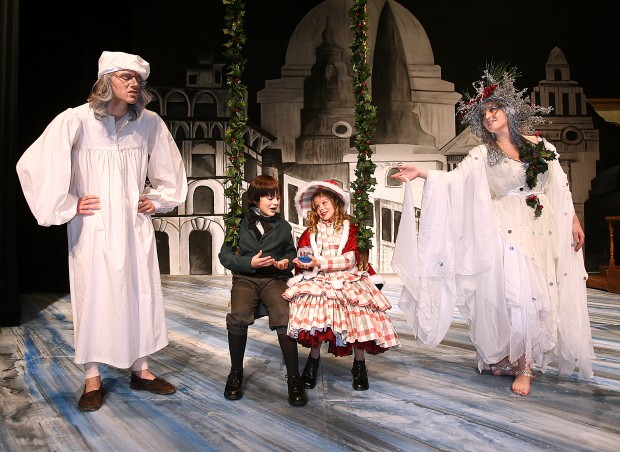 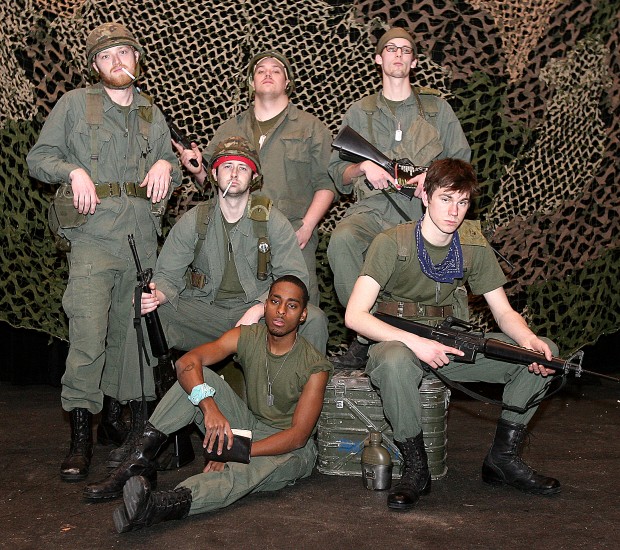 Colin Thelen is among the original cast of “5,000 Pounds” giving encore performances May 28 and 29 at The Pump House. The cast is, from left in back row, Thelen, Adam Petchel and Alex Brick; in middle row from left, Brandon Harris and Tim McCarren; and seated in front, Lance Newton. 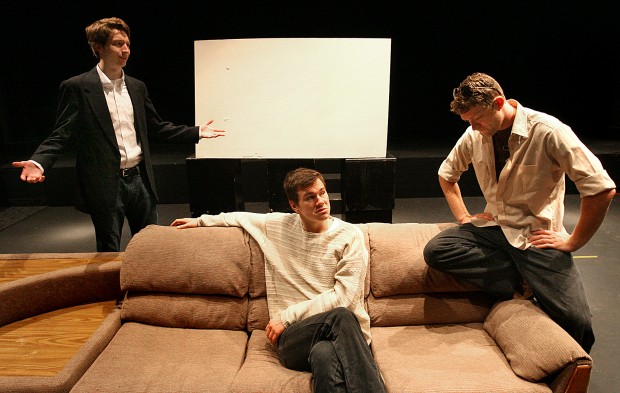 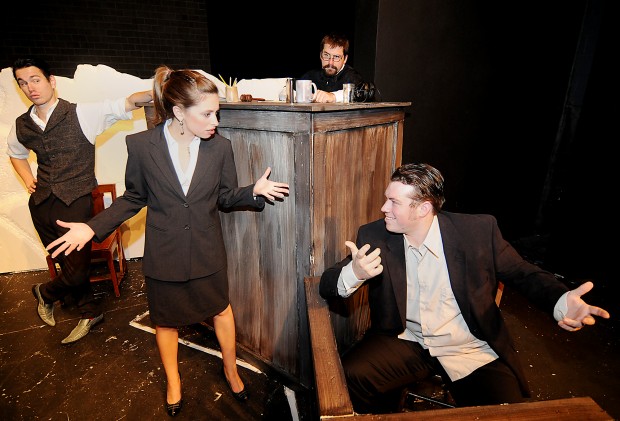 From left, Tim McCarren, Claire Ganshert, Drew Birmingham and Donnie Mezera rehearse “The Last Days of Judas Iscariot,” which opens Friday at the Toland Theatre at the University of Wisconsin-La Crosse.
By TERRY RINDFLEISCH |

Tim McCarren speaks eloquently onstage. He's a standout student actor at the University of Wisconsin-La Crosse, playing major roles that included Scrooge in the 2009 production of "A Christmas Carol." But offstage, McCarren often struggles to start a sentence or even say his name. He stammers, sputters and stutters. His face contorts as he tries to spit out words.

The 21-year-old is among 3 million Americans who live with stuttering, and the only 1 percent for whom it is a chronic condition.

He is not alone among actors, however, joining a group that includes Julia Roberts, James Earl Jones, Jimmy Stewart and Marilyn Monroe.

"It's not usual to get an actor who stutters offstage but is perfectly comfortable and fluent on stage," said Jane Fraser, executive director of the Stuttering Foundation of America. "It's a problem with word retrieval, but when they know what they're going to say on stage, they don't have a problem."

Stuttering is taking center stage with the release of a new movie, "The King's Speech," with British actor Colin Firth playing King George VI, who overcame his stuttering to address the British people on live radio during World War II after ascending to the throne in 1936.

The movie's portrayal of the king's relationship with his Australian speech therapist, Lionel Logue, also has generated unprecedented awareness of stuttering and therapy.

"This movie has done in one fell swoop what we've been working on for 64 years," said Fraser, whose father founded the group in 1946.

McCarren said he finds it odd that his name is one of the hardest things to say.

"It's frustrating as hell sometimes," McCarren said. "I have these thoughts about why I have this and how come one of the easiest things to do - speak - I'm not able to do."

He also finds it "absurd" to feel at home on stage.

"Most people have a fear and anxiety of being on stage in front of an audience," he said.

His stuttering first surfaced just before third grade, he said, when his family moved from Beaver Dam to West Bend in Wisconsin. It wasn't a particularly difficult adjustment, "but from then on I have been stuttering," he said. Experts say there's no reason to believe emotional trauma can trigger the condition.

But some children started making fun of him, McCarren said, and one teacher thought he should be in special education.

"In school, some thought I was slow, even though they didn't say it, and there was nothing wrong with me," he said.

McCarren had speech therapy through high school, and still uses the relaxation techniques and visual imagery he learned, he said.

"I can feel that I will stutter a half-second before it happens, so I can relax myself with deep breathing," he said. "I hold a lot of my air in, and then let it out to have another shot at speaking."

To speak fluently, he said, he visualize opening a door and hopping over a wall.

"That doesn't always work," McCarren said. "It's something I have to work real hard at."

A sense of humor helped. He became the funny one in school.

"I learned really early on that acting out or being silly worked and then I was able to speak well," he said.

He started out at UW-L as a science major, thinking it was a field where he wouldn't have to worry about stuttering, but said he wasn't having fun.

So he signed up for an acting class and found it natural and easy.

"My parents were excited for me, but they didn't think I would last through the year in theater," he said. "Now they believe it was right thing for me."

He had a major role as Bottom, a comedic character with more lines than any actor. "I gained a lot of self-confidence and had a lot of fun," he said.

Auditions still can be a problem, he said, because he doesn't know the lines ahead of time.

"I've had some awesome and some horrendous auditions," McCarren said. "I hear a line in my head and I can say it without stuttering. That's why I like to have my lines in my head as soon as I can.

"I have to work harder than most actors, but I'm able to do it."

"He gets off book and learns his lines quickly, so he is ahead of everyone in creating his character," Elder said.

"Tim certainly can carry a show, and one of the struggles is finding ways to stretch him as an actor," he said. "He has some good comedic skills already, so we wanted to find other roles for him. As a professional actor, he'll have no problems."

"Shakespeare is a little harder for me because it is a heightened form of language," he said. "We don't speak like that every day."

Playing Scrooge was easier because he used a different voice, McCarren said.

He doesn't stutter when he sings, either, so had no trouble playing Margaret Mead in UW-L's SummerStage production of "Hair."

"I've stuttered on stage a few times, but I'm usually able to hide it," he said.

McCarren plans on an acting career after graduation in May and wants to resume work with a speech therapist.

"I hope one day I wake up and the stuttering will be gone, but it isn't likely that will happen," McCarren said. "I'll probably end up at a spot where I am able to manage it."

A 27-year-old La Crosse man is being held in the La Crosse County Jail after allegedly stealing two firearms from an unlocked vehicle.

Colin Thelen is among the original cast of “5,000 Pounds” giving encore performances May 28 and 29 at The Pump House. The cast is, from left in back row, Thelen, Adam Petchel and Alex Brick; in middle row from left, Brandon Harris and Tim McCarren; and seated in front, Lance Newton.