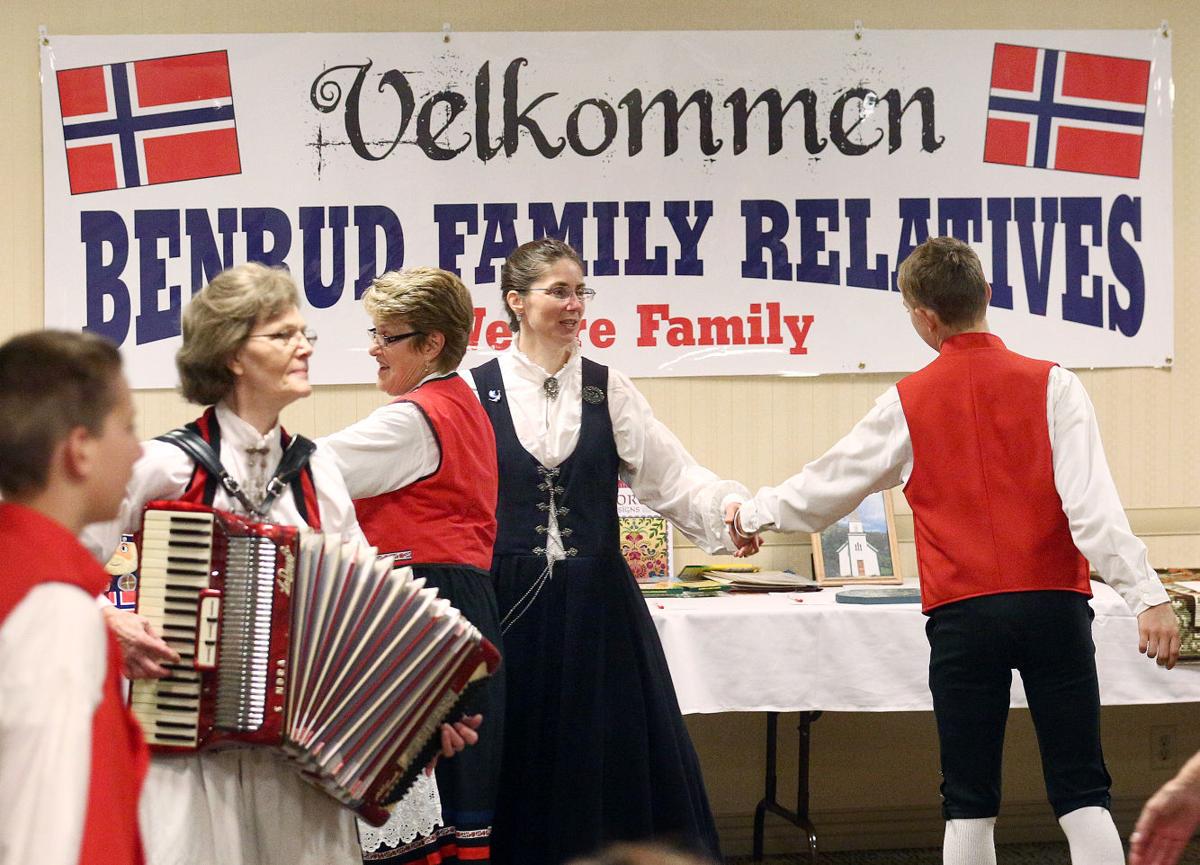 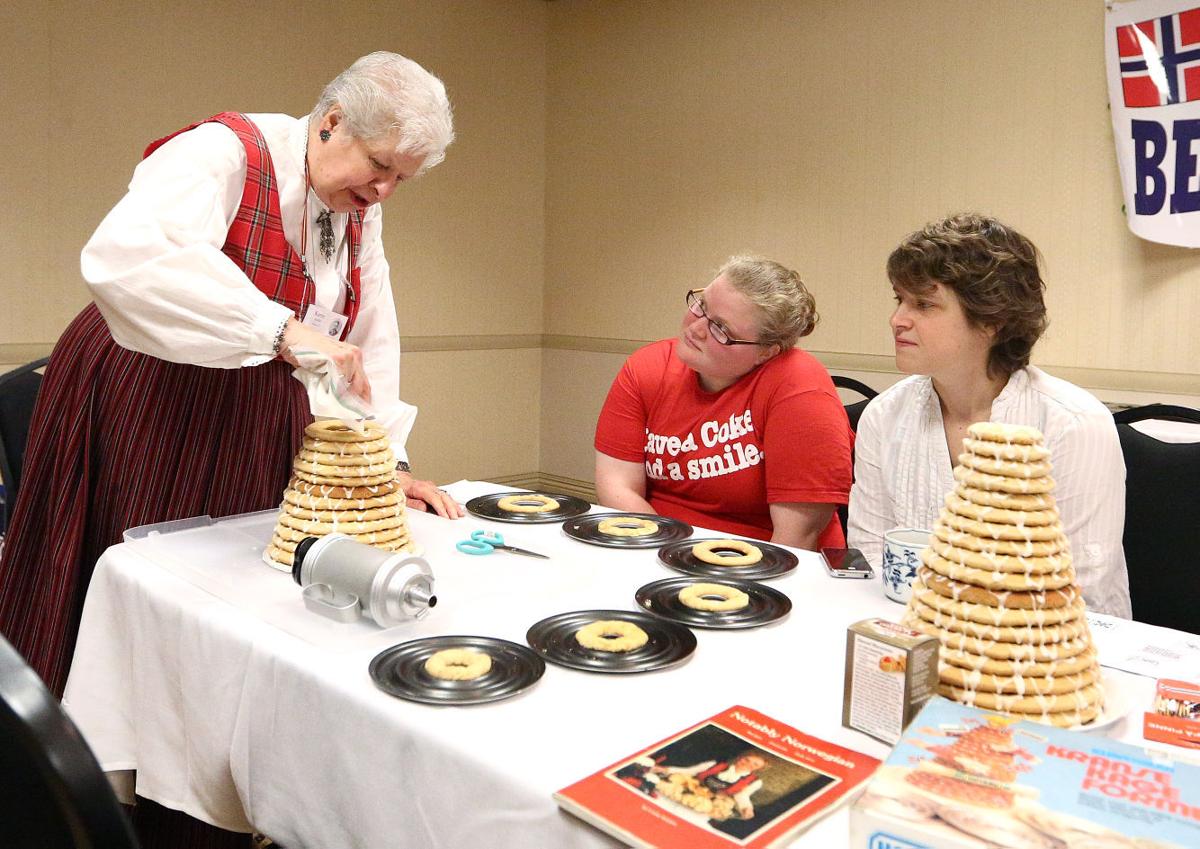 Karrie Aaseby of Menasha, Wis., teaches the finer points of constructing a kransekage cake Saturday during the Benrud Family Reunion at the Days Inn Conference Center in La Crosse. Kransekage is a traditional Norwegian cookie cake constructed by alternating layers of icing and concentric rings of cake. 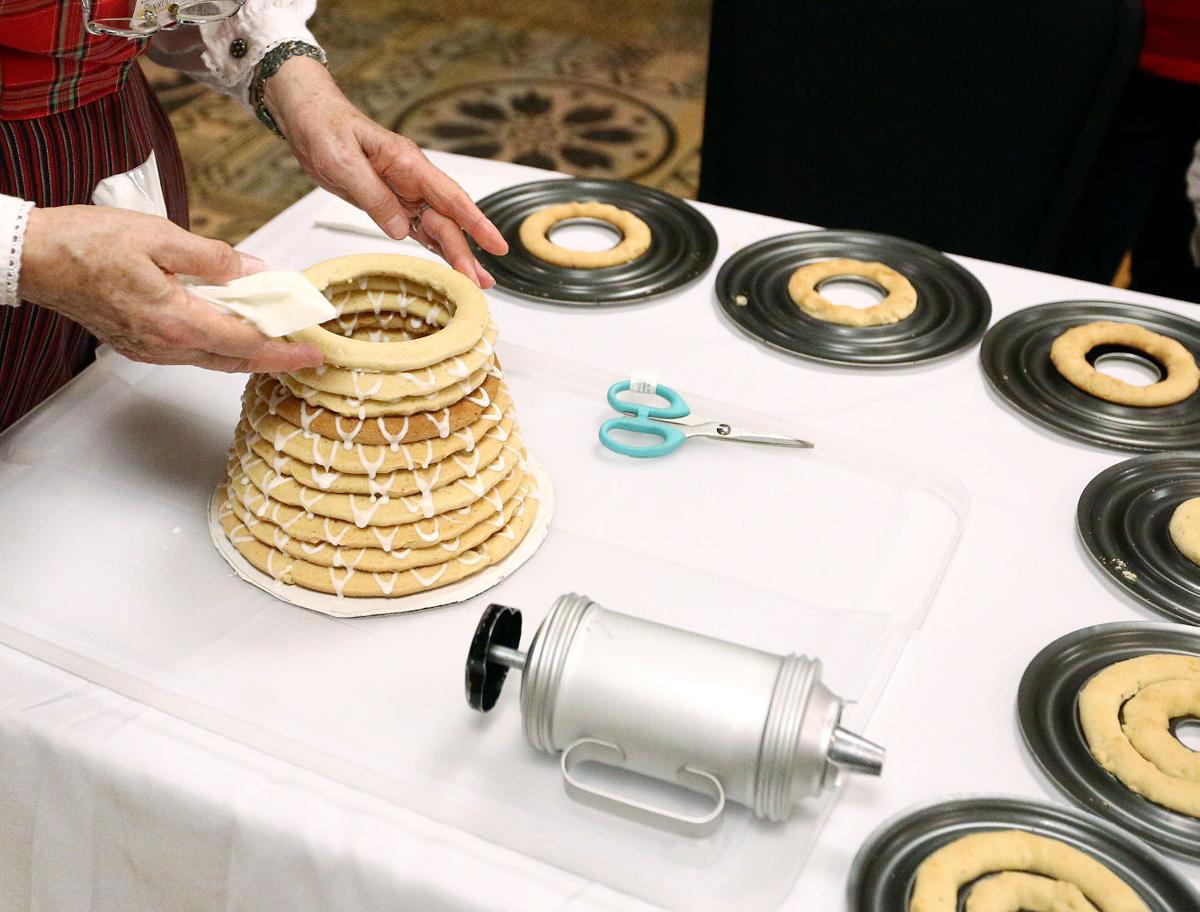 The Benrud family celebrated a reunion this weekend that dates back to the 19th century, when Peder and Anne Soffie Benrud joined their children in the Coulee Region.

The family, which branches out through Peder and Anne Soffie’s six children — Maren, Anton, Olava, Carl, Lena and Ole Kristian — into hundreds of households and 2,380 direct descendants, gathered this weekend in La Crosse to celebrate the Benruds’ journey from one small family on a Norwegian farm to a clan spread throughout the U.S. and Canada.

“Family really means something special for us,” said Curt Benrud, who traces his ancestry through Peder and Anne Soffie’s son Anton Benrud.

The family reunion started with Charles Harris Benrud in 1950. Charles had a fascination with people that led to him earning a master’s degree in sociology.

“That drove him into genealogy, as my dad told it to me,” Benrud said.

Charles was able track down addresses for each of his cousins, who had already begun to spread out from Wisconsin, and invited them each back home for a party. They held their first reunion in Onalaska not long after, with 28 of the 31 surviving grandchildren. Now the family numbers in the thousands, and fewer than a tenth of the living members make a crowd of 225 at the Days Inn in La Crosse.

“It comes down to the word ‘family,’ and the true meaning of family and heritage,” Benrud said.

Each generation instills the importance of family into the next one, not to mention an infatuation with history that seems to be genetic.

“It’s kind of a normal family story, but we understand it so well. That’s what’s fascinating to me,” Benrud said.

At the reunion, which takes place every five years, family members build on that family story, connecting to their ancestors through their shared Norwegian heritage with traditional dance lessons, baking demonstrations and visits to places that have reached hallow ground status for the Benruds. For example, Benrud remembers visiting the old rail station in Sparta and feeling overwhelmed by the connection to his ancestors.

“I got goosebumps at the thought. This is where it all began,” Benrud said.

The reunion began with tradition and history lessons Saturday, as well as a few rounds of Kubb, a Norwegian lawn game. The family will continue the reunion today with a visit to the grave of Peder and Anne Soffie’s youngest son to grow into adulthood, Ole Kristian, and a church service in Newry, Wis.

The family officers, led by Benrud Association President Iris Othrow, chose to dedicate the reunion Ole Kristian Pederson Benrud this year after realizing how often the man, who died unmarried and with no children, gets glossed over in their family history. It’s the first time the reunion has been dedicated to a specific relative, but Othrow felt it was important to honor Ole Kristian’s place in the family legacy.

“There are so many people in families who die young before they have a chance to have children,” Othrow said.

Othrow was forcibly reminded of that fact four years ago when her grandson Ryan died at age 23. Ryan didn’t have children, but he left the Othrow family with his own legacy. His death inspired the family to dedicate this year’s reunion to Ole Kristian.

“We decided it was about time we remembered (Ole Kristian) as the brother, son and uncle he was,” Othrow said.

Because Ole Kristian did have children, there wasn’t a lot known about him at the time. One of the family’s historians, Greg Olson, took on the challenge of searching him out.

“I used the records to hopefully bring him to life,” Olson said.

Olson found that Ole Kristian had traveled to the U.S. with his parents at age 11. Census records show he worked on his sister’s farm when he was 16. As a young adult, Ole Kristian began to go by “Chris Peterson,” rather than his given Norwegian name.

“Not long after that, he worked on a railroad,” Olson said.

A precious family letter sent back to Norwegian relatives reveals Ole Kristian traveled 600 miles west of the Cashton area to help with the rail line. Olson can’t say for certain how old he was or when he came back.

Ole Kristian died of a lung infection at age 22 and was buried at what is now the North Coon Prairie Lutheran Church in Newry. The family doesn’t know what day he died — his grave marker says just 1895 — but they do know his sister Maren was pregnant at the time. Just a few weeks after Ole Kristian’s death, Maren gave birth to a son, whom she named Christian.

The name was Americanized and spread throughout the branches of the family tree. Othrow’s parents, who were descendants of Anton Benrud, had planned to use the name if they had a son. Othrow honored their intention by naming her oldest son John Christian.

“It all went back to him,” Othrow said.

“We decided it was about time we remembered (Ole Kristian) as the brother, son and uncle he was.” Iris Othrow, president of Benrud Associated

1867: The Benrud family's journey to the U.S. from Norway begin with the honeymoon of Lars and Lena (Benrud) Anderson. The two moved to Sparta and began a farm.

1871: Anton Benrud, 17, and his future brother-in-law Carl Olson, 25, leaves Norway to join his sister Lena Anderson. The two pawned their trunks, which included all of their belongings, in Chicago to make it to Sparta. The trunks were lost in the Great Chicago Fire.

1872: Anton Benrud's oldest sister, Maren Benrud, comes to the U.S. alone to join her brother and fiance. She marries Carl Olson the next year.

1875: Peder and Anne Soffie Benrud travel with their daughter Olava, son Carl and son Ole Kristian to join the family.

“We decided it was about time we remembered (Ole Kristian) as the brother, son and uncle he was.”

Karrie Aaseby of Menasha, Wis., teaches the finer points of constructing a kransekage cake Saturday during the Benrud Family Reunion at the Days Inn Conference Center in La Crosse. Kransekage is a traditional Norwegian cookie cake constructed by alternating layers of icing and concentric rings of cake.