City of La Crosse looks at possible $4.42 million in budget cuts to offset losses
2 comments
Share this
Return to homepage ×

La Crosse city officials will vote during a special meeting Thursday on a new budget reduction plan that will attempt to offset revenue losses caused by the pandemic.

In total, the plan calls for $4,420,862 in budget cuts, which includes cuts to certain programs and projects, hiring freezes and cuts made within individual departments.

Departments will need to make $2.5 million of those cuts in total.

“Quality of life” departments — such as the parks and libraries — will see the largest group of cuts, needing to make $1,425,000 in-line budget changes.

In total, departments dedicated to safety like the police, fire and streets departments, will make $750,000 in budget cuts with this new plan.

Just more than $33,000 will be made in cuts for legislative departments such as the clerk’s and assessor’s office. Among those are also the common council and the mayor’s office, which will trim $3,300 and $25,000 from their budgets, respectively.

Support services departments will also be expected to make $266,700 in cuts, which includes the city’s legal, finance and human resources, planning and engineering departments.

If approved on Thursday, each department will be responsible for making its specific budget cuts, which could mean furloughs and layoffs.

“There are many departments within the city comprised of 88%-98% staffing. It is infeasible to consider that some of the necessary budget changes will not affect personnel within the various departments,” the new budget plan writes.

More than half of the city’s departments spend between 88% and 98% of their budgets on staffing, according the report, including the police department, where 92% of its budget pays for salary and employee expenses, and the engineering department, which dedicates about 95% of its budget.

These plans were made after an assigned task force interviewed each city department to go over expense needs and revenue.

It also kept in mind certain departments that were deemed more essential during the city’s fight over the pandemic, which is why things like parks received more cuts, while things like IT, which has been critical during the switch to virtual services, are only expected to make $1,700 in cuts.

City of La Crosse announces $168,200 in second round of small business relief grants

These cuts, including slashing things like the City Arts Board, North La Crosse Business Association, and various non-critical city projects, will leave the city with an expected revenue loss of $52,715.

Earlier in the month, the financial department forecasted that the city would lose about $5.9 million in revenue for the year, categorizing it as a “major recession.”

But the number was revised after securing state-shared funding and locking down specific department finances, and the revised revenue loss for the city is now at $4,473,577, before cuts.

The city will also bring forth to the council a resolution to waive penalties on property taxes due between April 1 and October 1, following legislation already made at the state and county level.

The city’s Finance and Personnel Committee and Common Council will vote on this resolution and the budget cuts at a set of special meetings starting at 3:45 p.m. on Thursday. The plans will require a two-thirds vote to pass. 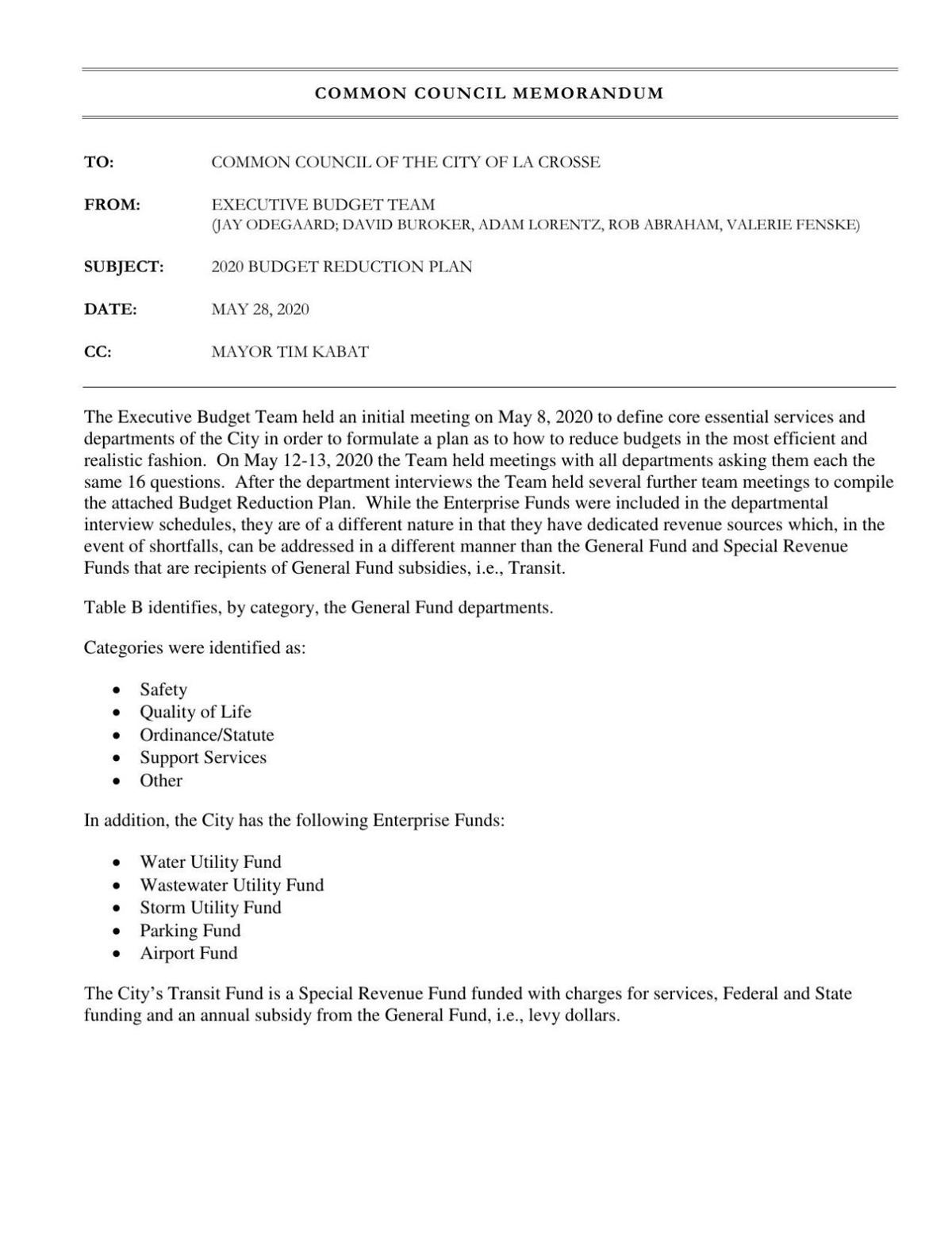