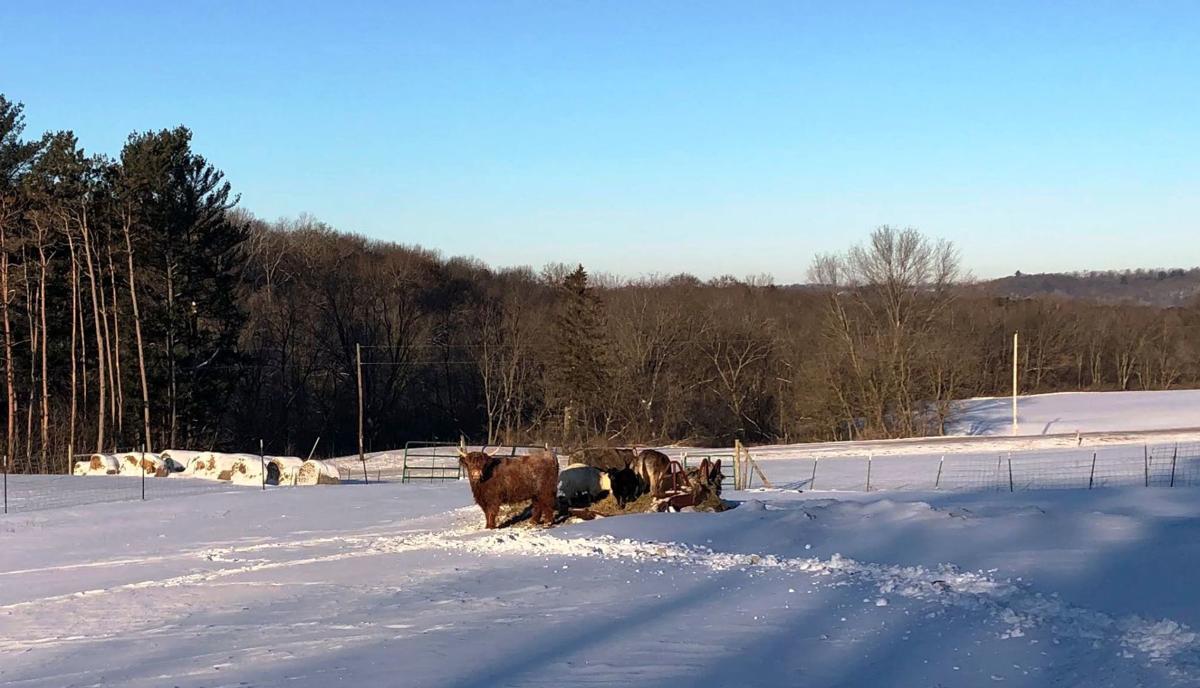 Chris Hardie's barnyard animals gather at the feeder on a morning when the temperatures were -20. 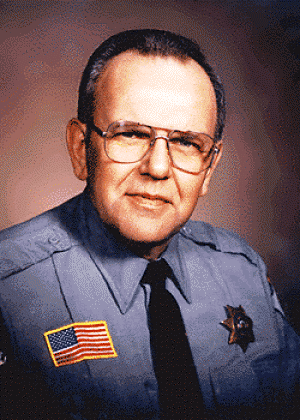 The late sheriff of Barron County Jerry Johnson was undersheriff when he recorded -60 at his home outside Cameron on Jan. 9, 1977.

A Rice Lake bumper sticker from 1977. 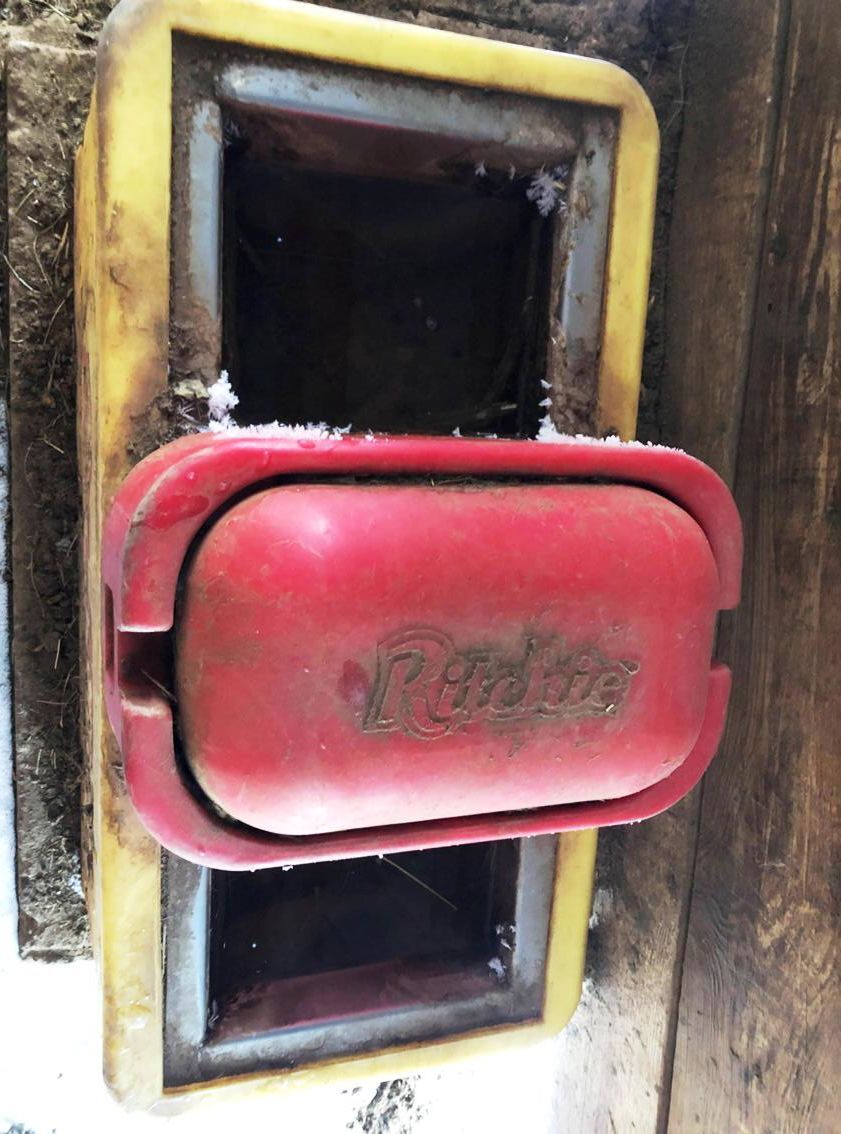 Even heated waterers can freeze when the temperatures dip into the double-digits below zero.

Old memories become blurry with the passage of time, but a particularly cold Sunday 45 years ago that stands out for me was memorable across western and northern Wisconsin.

I’ve written before about a bitterly-cold Sunday morning when our family miraculously made it to church. It may have been with some divine intervention, because getting chores done on the farm takes at least twice as long when the weather is so cold.

At the end of the service during announcements, the pastor remarked to the small group of shivering pilgrims about it being something like 35-below that morning. My grandmother Cecil Hardie promptly stood up — all of her barely 5 feet — and proudly offered in her Norwegian lilt: “It was 44-below in Franklin this morning.”

If any other worshipers had a colder temperature to report, they held their tongue. Grandma had spoken. Grandma watched the thermometer outside her kitchen window with great vigilance. She took pride in being the amateur meteorologist of the town.

Well, it turns out there were some colder spots than Franklin that day. It was on Jan. 9, 1977, that Barron County undersheriff Jerry Johnson could scarcely believe his eyes. According to an article in the Jan. 12, 1977, Rice Lake Chronotype, the thermometer outside the window had dipped to minus 60 degrees.

Johnson reported the reading to the dispatcher and spent the rest of the day — which happened to be Super Bowl Sunday (and yes, hell had not frozen over because the Oakland Raiders crushed the Minnesota Vikings, 32-14 that day) — answering phone calls from reporters from around the country.

Warren Leary, the Rice Lake Chronotype publisher at the time, wrote: “But minus 60? You’ve got to be kidding! Johnson was getting a little vexed with the inquiries. He wanted the callers to buzz off so he could watch the Super Bowl. And he wanted it to warm up, too. So did all the rest of us.

Here in Rice Lake, and in Cameron, in Canton, in Brill, in Barron, in Haugen and heaven knows where else, the tiny ice crystals spread out in a frigid frost haze over the snowy landscape.

Cars refused to start. Cats and dogs refused to poke their noses out of doors. Husbands refused to go ice fishing or snowmobiling. Some folks refused to even get out of bed.

Church services were sparsely attended. You could shoot a cannon up Rice Lake’s Main Street and not hit a soul. Hardly anybody came by the drug store for the Sunday paper. Water declined to flow from some faucets. Here and there a power line snapped.

It was cold, cold, cold and the furnace kept running, guzzling that high-priced stuff.”

Those furnaces that kept working anyway. Others with outdoor fuel oil tanks stopped when the fuel gelled because of the cold.

Johnson went on to serve as the Barron County sheriff from 1989 to 1999. He died in 2000. But his weather observation that day gave him some nationwide press, as even the National Enquirer wrote about the cold.

“At first I thought my damn thermometer was broken,” Johnson told the Enquirer. “I’ve lived in the north country all my life and I’ve never even heard of anything this cold before.”

Did it really get that cold? Like Grandma’s thermometer, Johnson’s thermometer did not meet National Weather Service guidelines. Officially the coldest temperature ever recorded in Wisconsin was minus 55 in the Sawyer County village of Courderay, Feb. 4, 1996.

In a 2017 follow-up story 40 years after the cold, the Chronotype said the official temperature in Rice Lake that day matched Franklin at minus 44. That’s what it was when the thermometer at the Rice Lake airport burst. Mercury freezes at minus 38.

Don Carney, a local historian, told the Chronotype that a high pressure system was hanging over Barron County that morning. He has mapped the temperatures and said he had farmer friends in the area who also registered minus 60.

Had it been made official, the -60 would be tied for the sixth lowest temperature ever recorded in the continental U.S. The Courderay mark of -55 is the 11th coldest on record. The lowest ever is -80 recorded Jan. 23, 1971 at Prospect Creek, Alaska, near the Arctic Circle.

Yes, it was cold in Franklin 45 years ago.

But not as cold as Cameron.

Even Grandma would have had to concede that.

Chris Hardie's barnyard animals gather at the feeder on a morning when the temperatures were -20.

The late sheriff of Barron County Jerry Johnson was undersheriff when he recorded -60 at his home outside Cameron on Jan. 9, 1977.

A Rice Lake bumper sticker from 1977.

Even heated waterers can freeze when the temperatures dip into the double-digits below zero.