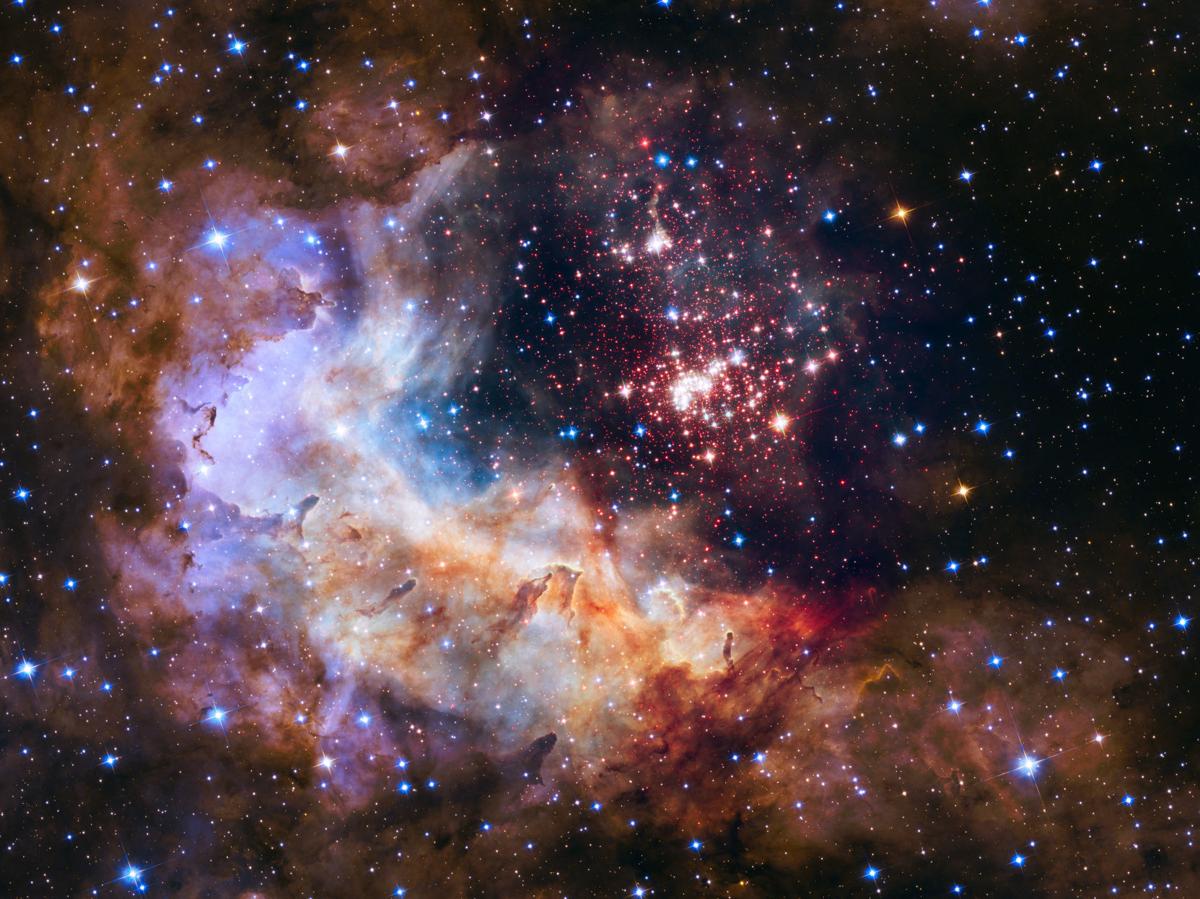 This undated photo provided by NASA shows an image taken by the Hubble Space Telescope showing a breeding ground for stars in the Constellation Carina, about 20,000 light years from Earth. Hubble sent its first photo back to earth May 20, 1990. 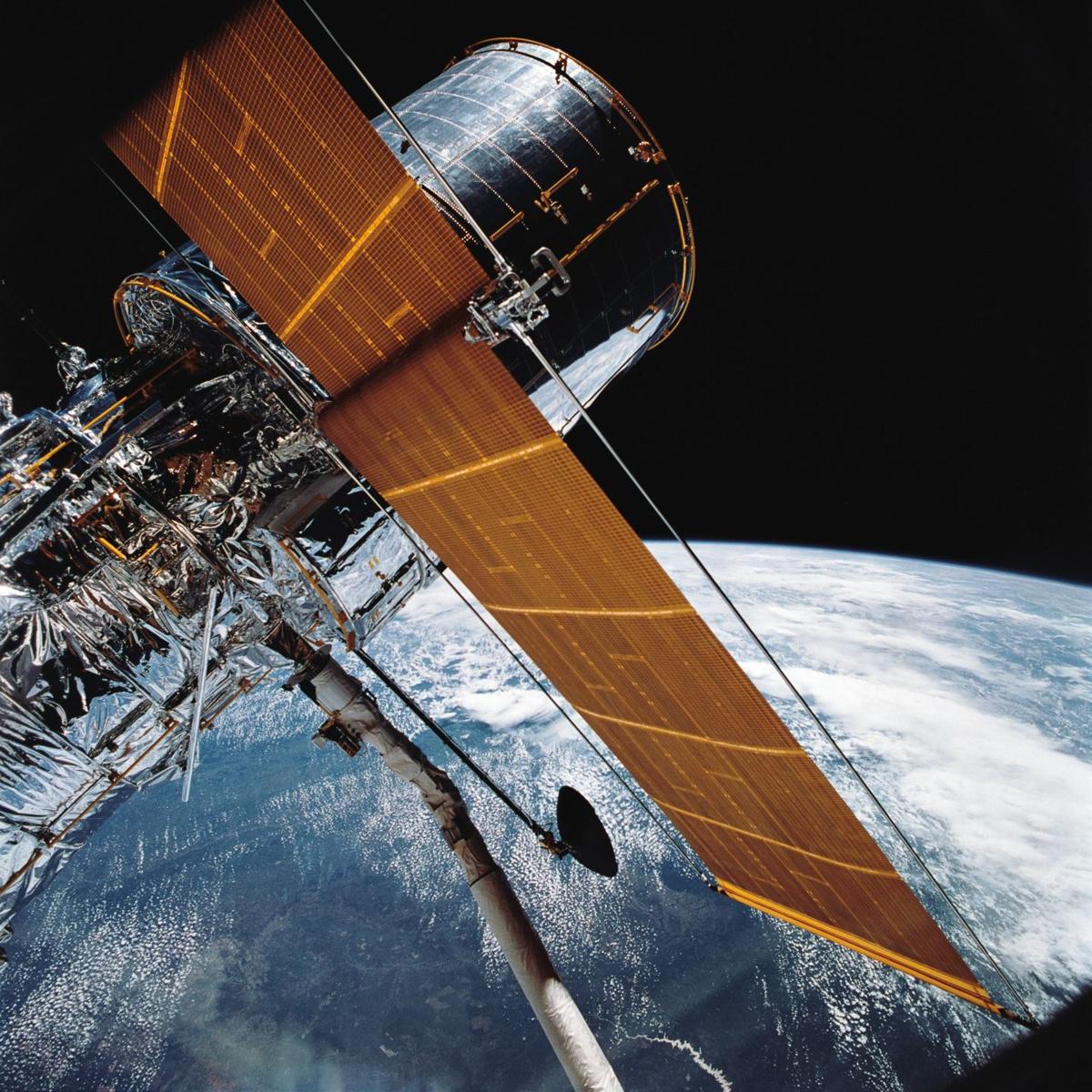 In this April 25, 1990 file photo provided by NASA, most of the giant Hubble Space Telescope can be seen as it is suspended in space by Discovery's remote manipulator system following the deployment of part of its solar panels and antennae.

Thirty years ago this week, the world entered a new era.

The Hubble telescope, the project NASA calls its most successful and long-lasting science mission, sent back its first photo May 20, 1990.

The telescope has been taking photos from outer space for three decades, showing people what the galaxy looks like far beyond what we could have hoped to see from the surface of the Earth. The data we received from Hubble changed our understanding of our world, how old it is and what the universe is even doing out there.

The space shuttle Discovery dropped Hubble off 330 nautical miles above the Earth April 25 in what was meant to be a 15-year search for new worlds. The telescope — named after astronomer Edwin Powell Hubble — was designed to get a look at what’s out there without being blocked by our atmosphere, which absorbs and distorts incoming light.

Thanks to Hubble, we have been able to narrow down the age of the universe to about 13.8 billion years, according to NASA. Before Hubble, we guessed it was anywhere between 10 billion to 20 billion years old — a range so massive that I can’t even conceptualize it.

Hubble helped scientists learn about dark energy, which causes the expansion of the universe to accelerate. It showed them galaxies in every stage of life, which then taught people about how galaxies are formed.

Astronomers were able to do things like examine Kepler’s supernova — first seen in the sky 400 years ago — and determine that it’s 14 light-years wide and expanding at a rate of 4 million mph.

Hubble also let us get a look at the birthing grounds for new planets, what scientists call protoplanetary disks. Basically, they’re clumps of gas and dust around young stars that eventually come together to form a planet.

It even gave us enough information about Pluto that astronomers downgraded it from planetary status, but I’m not holding that against the telescope.

Knowing all of these things gives us a new perspective on the universe.

Understanding things outside of our planet helps us understand what’s happening closer to home. And every astronomer in the world can submit a proposal and request time on the telescope, then everyone can see what they find after the data is publicly released.

I’ve never lived in a world where I didn’t know what the galaxy looked like. The photos are awe-inspiring, even in the original grayscale, before scientists add colors to show the location of chemical elements.

The Hubble gave us a glimpse of gorgeous natural phenomena like the Pillars of Creation, Lagoon Nebula and Whirlpool Galaxy.

They take my breath away.

It got me wondering if people knew then how cool it would end up, so I spent some time digging in the La Crosse Tribune archives from April and May 1990 to see what people had to say.

Now, I was barely alive at the time, so I don’t know for sure, but after a little perusing, I think people were profoundly skeptical that the Hubble was going to be worth all the hub-bub.

As far as I can tell, the Tribune didn’t run a story about the first photo, but headlines like “Hubble sees stars — finally,” which ran in the May 16, 1990, edition of the La Crosse Tribune, suggest people weren’t expecting great things.

After a little more reading, it was clear to see why. The telescope was a massive, $1.5 billion undertaking — and that’s in 1990 dollars, not 2020 dollars — and it was plagued by problems when it first got started, according to the reporting at the time. It apparently wobbled when the sun moved for awhile, which isn’t what you want out of something that is taking photos with long exposures.

It was launched seven years later than anticipated, then it took awhile to make sure scientists had it pointed where they wanted it.

Others were excited, though. The story on the launch ends on a high note, reading, “On hand to watch the Discovery launching was a contingent of scientists who have hailed the Hubble as the greatest advance in astronomy since Galileo raised a small telescope to his eyes nearly 400 years ago.”

Check out HubbleSite.org for more information on the telescope.

Cynthia M. Allen: Will schools open, be more normal in the fall? Or will COVID-19 disrupt another year?

Last week, our family gathered around the computer to watch our eldest daughter “graduate” from preschool.

Jerome Christenson: Where are all the goats?

I feel for Quentin Nguyen.

Jerome Christenson: How many songs have been silenced?

If John Prine were living he might write a song about it.

Olivia Herken: Giving back to community imperative for mental health during pandemic

"So though my contact with my family and my friends has been limited to laptop screens and waves through windows, this was a way to feel like we were maybe still spending a spring afternoon together."

Vince Hatt: Knowing yourself and what you want

I know of a man named Peter. When you call him, his recorded voice says, “Who are you, and what do you want? These are not trivial questions. …

Committees discussed a wide range of things — including COVID-19-related legislation — but other topics like development projects, budget reports and more were on agendas.

This undated photo provided by NASA shows an image taken by the Hubble Space Telescope showing a breeding ground for stars in the Constellation Carina, about 20,000 light years from Earth. Hubble sent its first photo back to earth May 20, 1990.

In this April 25, 1990 file photo provided by NASA, most of the giant Hubble Space Telescope can be seen as it is suspended in space by Discovery's remote manipulator system following the deployment of part of its solar panels and antennae.