The La Crosse Arts Board released a statement Tuesday, a day after the piece of artwork was found, saying it “denounces the act of willful damage” to the artwork, titled “Hatched Baby.”

“We urge those who participated in these acts of vandalism to come forward so we may begin the process of restoring this work of art now that the stolen portion has been recovered,” the board said. “Regardless of one’s opinion of a work of art, theft and vandalism are unacceptable.”

The face of the statue, which was created by an artist from La Crosse’s German sister city, includes a cracked egg shell with a blue baby head emerging from it.

Police reported seeing it dismembered early Sunday morning, and photos of the stolen face emerged on social media later that day. A homeowner reported finding the sculpture in their yard early Monday morning, and it has since been returned to the city, though there are currently no suspects in the theft.

The Arts Board addressed the public’s mixed feelings on the sculpture, which has been sitting on the southeast side of city hall since 2018. After reports of the weekend’s incident, many comments flooded online from people saying they weren’t upset the sculpture had went missing.

“When art exists in the public sphere, it is subject to scrutiny, risk and sometimes outrage, and our community can support enthusiastic debate on this topic,” the board said.

“Works of art do not solely need to elicit feelings of joy. Art can evoke sadness, anger, thoughtfulness, and a myriad of other feelings. It is for the observer to distinguish their thoughts and feelings about the work of art,” the board said.

In addition, the board said that there are moments when removal of public art is warranted through an official process, such as the removal of the controversial Hiawatha statue last year, or removals of Confederate statues happening around the country.

“These examples exist in a completely different context and it is important to point out the difference between the crimes of theft and vandalism and planned dismantling of biased monuments,” the board said.

This bronze sculpture features Olympic medalist George C. Poage. The La Crosse High School graduate made history crossing the finish line third in the 220- and 440-yard hurdles during the 1904 Olympics in St. Louis, Mo., becoming the first African-American to earn a medal in the modern games.

This majestic bird sits upon a 30-foot tree trunk as it watches over the Mississippi River at Riverside Park. Constructed out of Cor-Ten steel, the wingspan is 20 feet and the head is composed of stainless steel. The Eagle Landmark was donated by the D.B. and Marjorie Reinhart family and dedicated to all past, present and future employees of Gateway Foods, Inc. and affiliated Reinhart Cos.

This fountain-based piece is of a gentle female figure suggesting quiet contemplation. The rest of the sculpture might be seen as a base for the figure, but it is no less sculptural and contributes equally with its complementary negative images and contrasting planes. It is made of cast and fabricated bronze.

The statue of a boy pulling a thorn from his foot is a replica of an 1825 statue in the reception room of city hall in Epinal, France. It was a gift from Epinal to La Crosse to celebrate the 20th anniversary of our sister-city relationship. It is symbolic of Epinal, whose name derives from the French word epine, meaning thorn, and is a copy of an antique Greek statue. The city of La Crosse sent a replica of its La Crosse Players statue to Epinal in exchange.

Water Over the Dam

Inspired by the flood of 1993, this sculpture describes the river’s action as it tumbles over the dam, sometimes curling back on itself. It is constructed of welded and curled steel and is set in cement. The steel work was done by Mid-West Fabrication.

Location: Northwest corner of the Murphy Center on the Viterbo University campus

A 6-foot metal sculpture erected to commemorate past, present and future educators. It includes tools such as a ruler, pencil, paintbrush, journal and cylinder.

This seven-fountain water feature represents the “7 Rivers Region.” The three larger fountains represent the confluence of the three rivers at Riverside Park — the Mississippi, Black and La Crosse. The water is a sign of strength and vibrancy, representing the downtown area. This fountain, which received funding from the Hoeschler family and the city of La Crosse, has become a gathering spot and focal point of the park.

Abstract painted aluminum sculpture of a boy and his dog located at the entrance of Myrick Park.

Two flat blue dancers portray a joyful energy as the dance with a looping stainless steel round ribbon surrounding them, showing the joy of being alive through the ups and downs of life. The sculpture was formerly located outside The Pump House.

This sculpture features the legendary “King of Beer” and “Patron Saint of Brewers.” The original concrete version was vandalized in 2005. The new sculpture is made of fiberglass fashioned by Byerson Fiberglass and Marine in 2017.

This sculpture is the work of German artist Wolfgang Auer, who lives in La Crosse's sister city of Friedberg. His Blue Babies project has been on display all over Europe.

This bronze sculpture depicts King Gambrinus, patron figure of brewers. The original sculpture by Elmer Petersen was recreated in 2017 by the artist and commissioned by the Cleary Family.

This is a fiberglass replication of the Lacrosse Players sculpture in downtown La Crosse.

Location: 1725 State St. on the University of Wisconsin-La Crosse campus

The stainless steel eagle, perched atop five decorated steel arches and masonry columns, represents the national symbol, appearing on the Great Seal of the United States, and serves as a local symbol of UW-L athletic teams. This sculpture is intended to honor veterans of all five branches of the U.S. military.

This bronze likeness of 19th century lumberman and financier Gideon Hixon stands just across Badger Street from his stately home, now a museum owned and operated by the La Crosse County Historical Society.

A 9-foot bronze sculpture commemorating St. Francis of Assisi, who is depicted standing on a crescent of the moon, holding a sun disk in his hand.

A Simpler Time and Fido

This sculpture, inspired by a photograph by local photographer Theresa Smerud, is reminiscent of days gone by and captures the freshness, innocence and excitement of children as they greet boats and visitors from the river. All funds raised through the sale of the surrounding inscribed bricks benefit the La Crosse City Vision Foundation endowment to support downtown beautification projects for years to come.

This statue is dedicated to Ellen Hixon, widow of Gideon C. Hixon, who was responsible for saving Grandad Bluff and Hixon Forest after a developer began turning it into a rock quarry.

This is a reminder of how La Crosse got its name, from the Native American game the French called “lacrosse.” The three life-size figures, depicting three men of the Ho-Chunk nation, were made from welded Cor-Ten steel sheets, with resulting planes and welded lines that express motion and strength.

12-foot steel sculpture enameled in a bright red/orange hue. As a non-objective sculpture, the viewers may provide an imaginary subject of their own.

A bronze mother and her child rest upon a granite base.

Standing 20 feet high, this painted aluminum sculpture was originally located in Valley View Mall. After removal from the mall, the sculpture was painted brown and moved to Burns Park. The sculpture was moved to the La Crosse Municipal Boat Harbor in August 2019 to act as a way point for the harbor,

The piece consists of three legs that intertwine and create an interlocked design at the top. The title comes from the word lyre after the constellation of stars.

To see photos from the early years of Valley View Mall, click here.

Life-size bronze sculpture of the founders of Gundersen Clinic, Adolf and Helga Gundersen.

Brick bas relief representing the ancient Greek muses of Dance, Music, Comedy and Tragedy, set in the natural beauty of the area’s rivers and bluffs.

The COR-TEN steel sculpture was designed to resist corrosion and age with a luminous red brown patina. The interpretation of the subject is up to the viewer's own imagination.

An 8-foot-tall cast bronze sculpture of a family of four.

The stained glass sculpture was designed to celebrate the joy and music-making of the La Crosse Symphony Orchestra. The colored glass-filled panel sculpture represents a musical score with thick, stain-glass notes of jewel quality that resemble church windows.

Location: Fourth and and Vine streets

This contemporary sculpture is of a boy with angel wings and his skateboard. Cast in bronze at Lunde Foundry using the “lost foam process.” The sculpture was first carved to full size, cut into approximately 25 pieces, cast and welded together, and the final detail formed.

This statue of Walter “Babe” Weigent — the longtime teacher, coach and athletic director at La Crosse Central High School — sits at the corner of the park that bears his name. The high school was located at that site before it relocated to Losey Boulevard South in 1967.

"Regardless of one's opinion of a work of art, theft and vandalism are unacceptable. ... Works of art do not solely need to elicit feelings of joy. Art can evoke sadness, anger, thoughtfulness, and a myriad of other feelings."

COLLECTION: Damaged beyond repair, no suspects 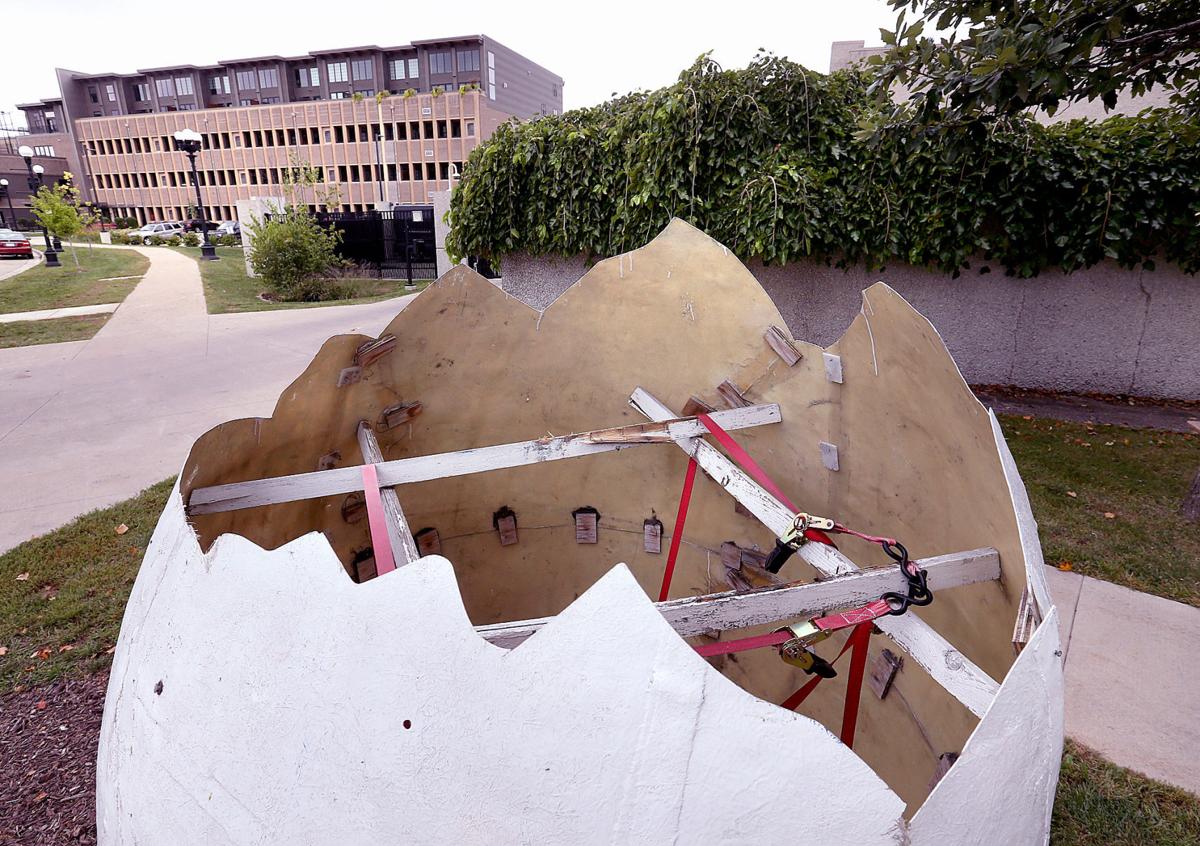 The blue baby head of a sculpture situated outside La Crosse City Hall went missing over the weekend. Its egg base is seen empty mid-day Monday. 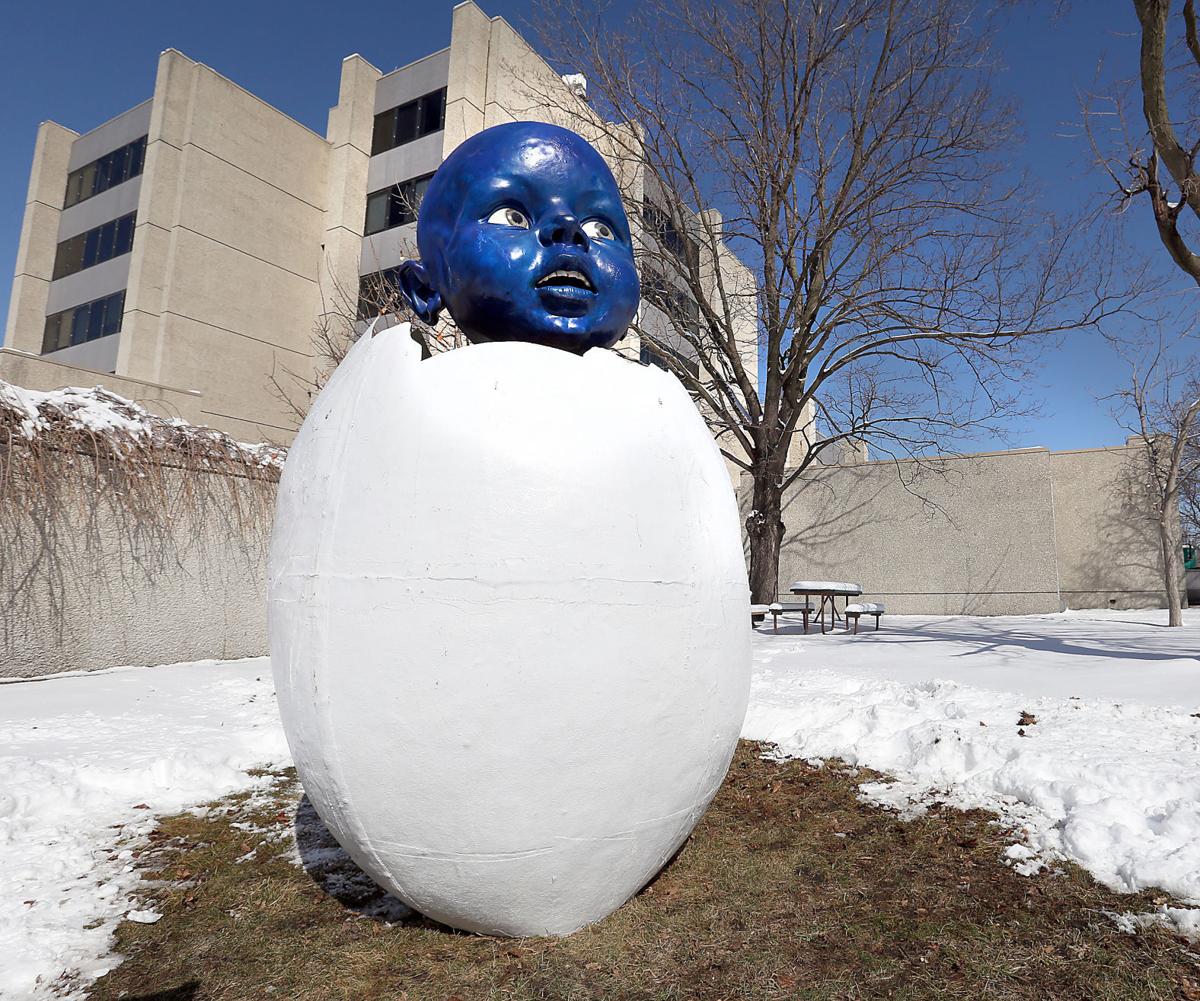