La Crosse County Circuit Court officials announced Tuesday they will allow law enforcement to issue signature bonds for everyone arrested for misdemeanor and nonviolent felony offenses as part of the response to the coronavirus.

The court issued an emergency temporary measures order to last through May 1 designed to alter regular court business to do the best it can to keep everyone safe and healthy throughout the global pandemic.

The bond decisions will reflect the heightened risk to large numbers of offenders confined in small spaces, as well as jail staff, Justice Support Services staff and first responders, including law enforcement, according to the order agreed upon by all five judges.

“These policies are designed to maintain public safety with respect to offenders who pose the most serious risk to the community while limiting contact with offenders who do not pose a serious risk,” according to the order.

Testing requirements for alcohol and drugs will be reduced to the minimum necessary.

All nonessential jury trials will be rescheduled after May 1, and any trials deemed essential by the court will be held at the discretion of the court.

Potential jurors who request deferment based on concerns of exposure to COVID-19 will be liberally granted.

Initial appearances for those charged with a misdemeanor will be adjourned until after May 1, and defendants are encouraged to file authorizations to allow their attorneys to enter pleas on their behalf.

Initial appearances for people in custody will be limited, with no more than six La Crosse County Jail inmates being brought to the courtroom at a time.

Regular treatment court sessions will be suspended until after May 1; however, participating via teleconferencing or videoconferencing may be adopted in the discretion of the specific court. People on supervision will continue to take place with a strong preference for contact by phone. Individual offenders may be called into court at the regular time to address significant issues.

Eviction mediation will be conducted via teleconference, and if an agreement is not reached with a mediator, the matter will be scheduled for trial after May 1.

“The court acknowledges the time limits for eviction, but in light of the unique public health dangers and economic impact on persons will make a finding of good cause to extend any trial until after May 1, 2020,” according to the order.

Written answers are encouraged and mediation will be conducted by phone.

Initial appearances on traffic cases are put off until after May 1, and the court will accept pleas either through lawyers authorized to speak on behalf of their clients or by phone. 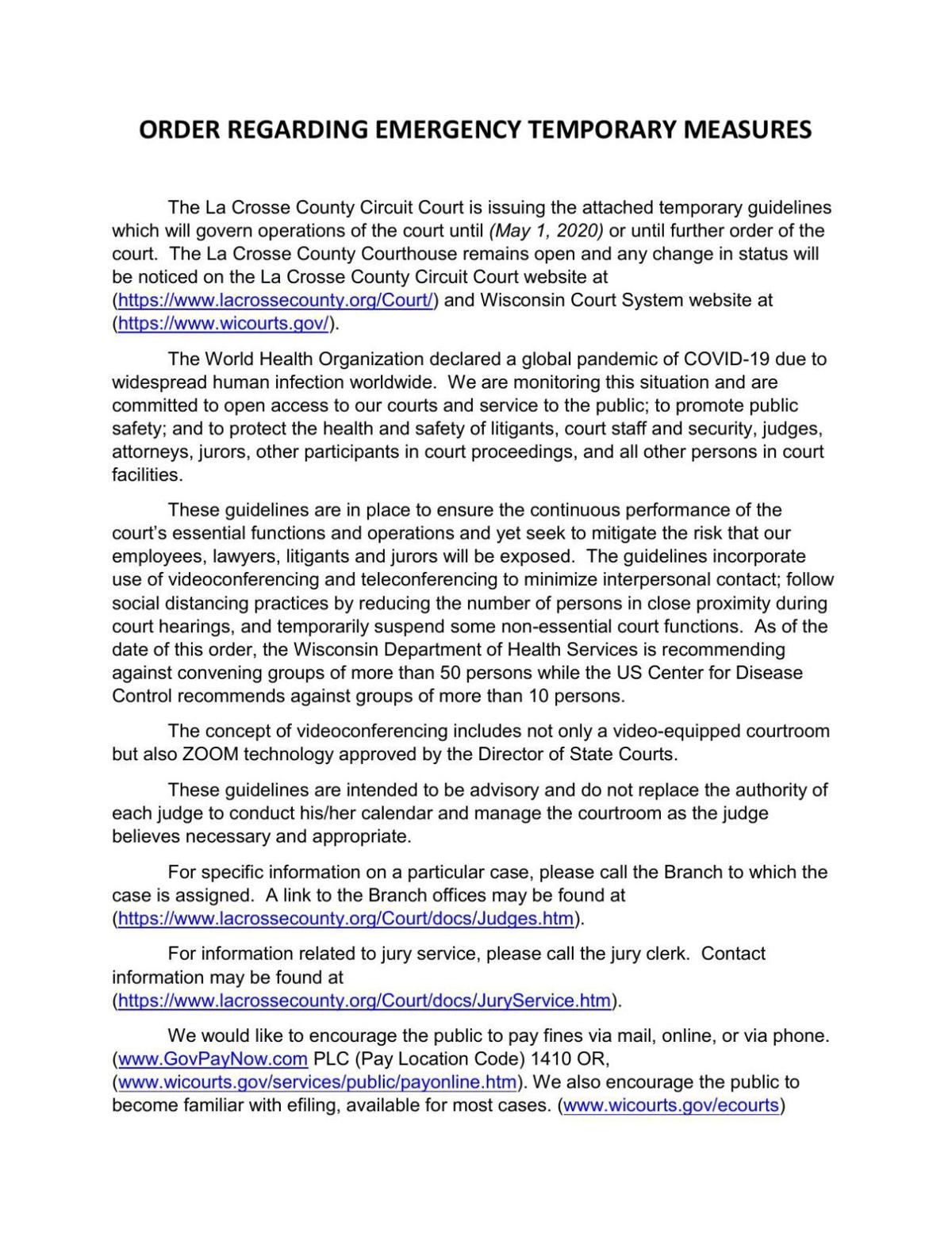