Police busted a La Crosse man Tuesday with more than two pounds of methamphetamine and other drugs with an estimated value of $40,000, police said.

Andrew R. Henke, 35, was arrested on a charge of possession with intent to deliver methamphetamine, police said.

La Crosse police said officers executed a search warrant at a residence of the 800 block of Avon Street after receiving a tip that drugs were being sold from there.

Police arrested Henke and investigators discovered more than two pounds of methamphetamine, which is equivalent to about 1,000 grams and has a street value of about $26,000, police said.

Police also said they discovered drug-packaging material, more than 110 grams of an unknown white substance and more than $14,000 in cash.

“While the La Crosse area continues to struggle with drug dealing of all kinds, methamphetamine is clearly the most significant drug issue for our community,” police said in a statement.

Joel R. Davis, 38, of Onalaska, was charged March 29 with possession of methamphetamine and carrying a concealed weapon. Police stopped the vehicle Davis was driving and discovered a gun, about $1, 400 in cash and methamphetamine, according to the complaint.

Michael W. Quinones, 26, of La Crosse, was charged March 27 with second-degree sexual assault. Police arrested Quinones after he made sexual advancements, inappropriately touching a woman and lying on her while she was sleeping, according to the complaint.

Danielle S. Kraus, 27, of La Crosse, was charged March 27 with felony retail theft and felony bail jumping. Police arrested Kraus after a store employee reported that Kraus took several items, including several video games, and attempted to leave without paying, according to the complaint.

Shelby L. Roubideaux, 25, of La Crosse, was charged March 21 with possession with intent to deliver methamphetamine and possession of drug paraphernalia, a repeat offender. Police arrested Roubideaux after a police dog confirmed the presence of drugs in her vehicle, according to the complaint.

John P. Reilly, 40, of Madison, was charged March 19 with felony retail theft and felony bail jumping. Police arrested Reilly for multiple theft complaints that have occurred over the course of two years at several Kwik Trip locations, according to the complaint.

Corey D. Taylor, 32, of La Crosse, was charged Monday as a fugitive. Taylor had an arrest warrant from Franklin County, Mo., according to the complaint.

Jacob J. Adams, 21, of La Crosse, was charged March 12 with throwing or discharging bodily fluids at a public safety worker. Police arrested Adams after Adams spit on an officer who was dispatched to Gundersen Health System because Adams was flailing his arms, spitting blood and swearing at staff who were trying to treat him for a possible concussion and alcohol poisoning, according to the complaint.

Max O. Stockert, 35, La Crosse, was charged March 4 with felony bail jumping, resisting an officer and disorderly conduct. Stockert violated terms of a previous bond prohibiting new crimes when he became upset and started breaking his property and did not comply with officer’s orders to get on the ground, according to the complaint. 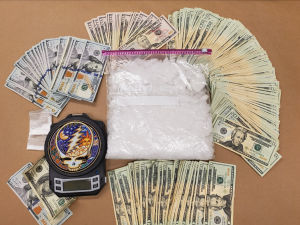 Police said the amount of methamphetamine seized from Henke is more than all the 37 possession with the intent to deliver methamphetamine charges that police referred to the La Crosse County District Attorney’s office in 2018.