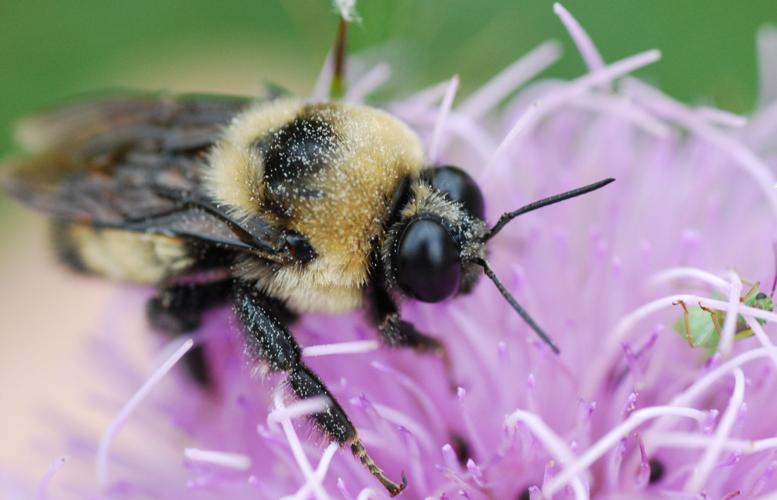 A bee visits a flower at the University of Wisconsin Arboretum. 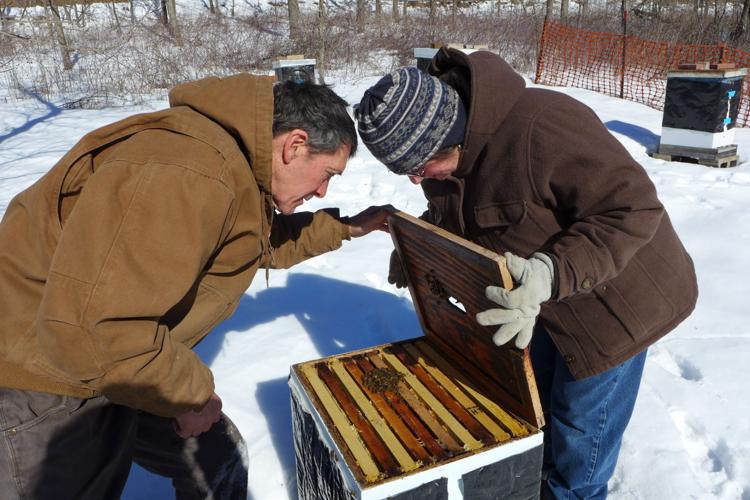 Farmer and beekeeper Harriet Behar and her husband, Aaron Brin, check on the bees at Behar’s Crawford County farm. Behar has 25 beehives on her 216-acre farm in southwestern Wisconsin. 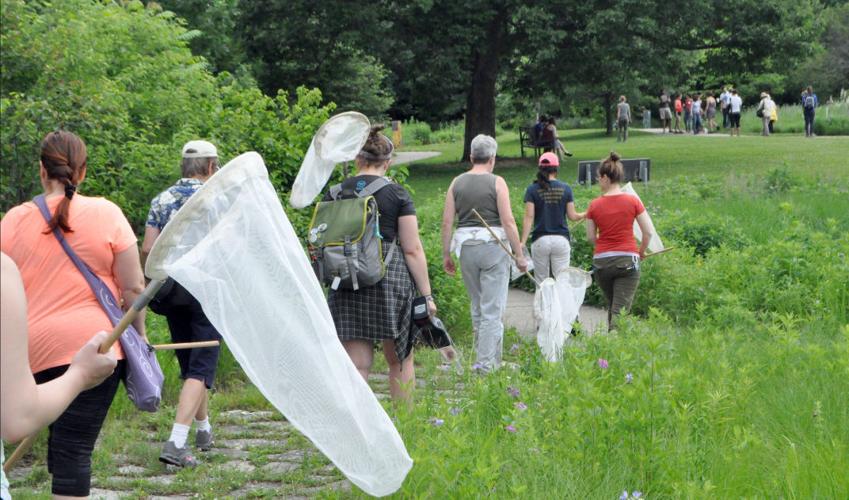 p class=”wp-media-credit”>Attendees at the 2015 Bee Fest at the University of Wisconsin-Madison Arboretum set out to catch and identify bees. Wisconsin has among the highest annual loss rate of managed honeybees in the country.

Packed into brains the size of a sesame seed, bees’ navigational systems enable them to locate and pollinate millions of dollars worth of Wisconsin crops annually.

But Wisconsin has become a hard place to be a bee.

The state’s honeybee colony die-off rate, among the highest in the nation, last year was around 60 percent. Beekeeper surveys show 15 percent is generally considered to be an acceptable loss rate.

Wisconsin pollinator populations have been declining for years, endangering the growth of apples, cranberries, cherries and many other fruits and vegetables that rely on bees, butterflies and other pollinators to fertilize them, helping them produce seeds and fruit.

And critics say a recently-issued draft of a pollinator protection plan for Wisconsin may offer only limited relief for the insects. The plan recommends voluntary actions such as increasing roadside plantings and pollinator-friendly home gardens, but sets no targets for decreasing the use of a controversial class of agricultural pesticides, neonicotinoids, that attack insects’ brains.

“If it’s all voluntary, it’s basically something that no one has to follow, so what is the point?” asked Harriet Behar, an organic farming specialist with the Midwest Organic and Sustainable Education Service, a nonprofit that promotes sustainable agriculture. Behar keeps 25 beehives on her 216-acre farm in Crawford County in southwestern Wisconsin.

Many scientists and beekeepers including Behar believe large-scale farming practices for crops such as corn and soy — which together represent a $2.6 billion industry in Wisconsin — are important contributors to pollinator declines.

“Corn growers, soybean growers don’t need pollinators, so (they) may be less sensitive to the impact their chemicals have on the rest of the environment,” said Claudio Gratton, professor of entomology at the University of Wisconsin-Madison, who worked on the proposal for the state Department of Agriculture, Trade and Consumer Protection.

Other factors such as parasites, pathogens, beekeeping practices that may spread viruses, and extreme weather, including drought and severe cold, can take a toll on bees.

There are also pesticides, including so-called neonics, which act like nicotine in how they target the insect brain.

Introduced in the 1990s as more targeted toward specific pests and less harmful to humans and wildlife than older, more toxic insecticides, neonics quickly grew in market share and have become the most widely used insecticides worldwide, with billions in annual sales.

Politically powerful agrochemical interests, including insecticide maker Syngenta, are among the largest producers of neonics. Representatives of Syngenta and the industry trade association CropLife America helped draw up Wisconsin’s pollinator plan. They insist the link between bee population declines and proper use of their products has not been made.

Seed coating is the biggest factor driving increased use of neonics. In January, a group of farmers, beekeepers and advocates filed a lawsuit against the U.S. Environmental Protection Agency for exempting neonic seed coatings from regulation. The plaintiffs say the lack of regulation will harm pollinators and the environment.

By 2012, virtually all corn seed, and about 30 percent of soybean seed planted in Wisconsin and across the country, was coated with neonics, said Paul Mitchell, a UW-Madison associate professor who co-directs the UW-Extension’s Nutrient and Pest Management Program. Neonic-coated seeds also are widely used on other crops such as potatoes.

Neonics are systemic, meaning they are absorbed and remain in the tissue of the plant. They are also potent neurotoxins. Neonics are chemically designed to attack the nervous system of pest insects that eat any part of a treated plant, causing paralysis and death.

With widespread reliance on neonics, unintended exposures to beneficial insects such as pollinators can happen.

Seeds coated with neonics have become sort of an insurance policy for many farmers, said Gratton, who along with Christina Locke, a postdoctoral researcher in Gratton’s laboratory, worked on the pollinator plan.

“With neonics, there is less application since it’s present in the plant the entire season; it’s a one-and-done idea,” Gratton said. “Overall there is less used, but there are also a lot of unintended consequences.”

Scientists have identified multiple routes by which beneficial insects such as bees suffer unintended exposures to neonics, even if they are not feeding on the treated plants, as a pest might. Among them is exposure to pollen or nectar of treated plants or by visiting flowers and other plants unintentionally contaminated through neonics’ persistence in soil and water.

Pierre Petelle, a vice president of CropLife Canada, wrote in a 2014 blog post on the industry group’s website that many of the lab studies used to justify restrictions expose bees to “unrealistically high doses of neonics.”

David Flakne, a representative of Syngenta and one of the stakeholders invited by DATCP to contribute to the pollinator plan, said neonics are safe when used as directed.

“Scientific evidence clearly shows that bees and other pollinators can coexist safely with modern agricultural technology, such as neonic insecticides, when product labels are followed,” Flakne wrote in an email to the Wisconsin Center for Investigative Journalism.

Scientists say while there are multiple causes of bee declines, studies continue to emerge that question whether bees and neonics can safely coexist at field-realistic exposures.

An international task force that examined more than 800 peer-reviewed studies concluded that the widespread use of neonics and a similar systemic insecticide, fipronil, are important contributors to the decades-long decline in pollinators and other insects, which are “vital to food security and sustainable development.”

A study funded by the Wisconsin Potato Industry Board and conducted in the state’s Central Sands area detected leaching of neonics into groundwater and found that high-capacity irrigation well water was recycling neonics back onto farmland. The findings raised concerns about how this ongoing, low-level exposure might be affecting “non-target organisms” such as bees, the authors said.

Some neonics are restricted in Europe and are the subject of lawsuits in the United States and Canada due to concerns about their impact on pollinator health and lack of sufficient regulation.

The EPA also has suspended approval of new neonic-based insecticides and is re-evaluating neonics currently on the market. The agency in January issued its first of four pollinator risk assessments on the oldest neonic, imidacloprid, which showed it is “a threat to some pollinators.”

Alan Jewell, a farmer for 42 years with 4,000 acres of corn and soy in Dodgeville, said he is willing to spend a few extra dollars per acre for neonic-coated corn seed to protect it from pests because “our profit margin doesn’t allow us much wiggle room.”

“Cutworms can kill off 40 to 80 percent of seedlings,” he said. “Then there are wireworms, and all kinds of pests.”

Some farmers, however, are looking for alternatives.

Steve Groff, a farmer and seed dealer in Pennsylvania, recently began an experiment with support from Penn State to see if planting neonic-free corn seed would protect the beneficial insects that prey on the slugs that can destroy his corn.

The experiment was successful, Groff said. “We started seeing that when we planted green, we had less slug pressure.”

By using alternative farming strategies, such as crop rotation, cover cropping and not tilling soil, Groff said he has reduced his insecticide use by 80 percent.

The 2015 federal plan that encourages states to develop their own pollinator plans has limited discussion about the role of neonics, Gratton said, adding, “The agrochemical sector is very powerful.”

At the opening of the first stakeholder meeting last year, Mike Murray of DATCP’s pesticide announced that the plan would involve only voluntary measures. “We’re not on a regulatory track here,” he said.

For Gratton, restricting neonics might cause farmers to revert to older, more toxic pesticides. “A more nuanced strategy,” Gratton said, “may be both more palatable and get you the same result in terms of protecting pollinators and not impacting yields.”

Other states and countries have taken a more aggressive approach.

The state of Oregon has imposed limits on neonic use on flowering trees, and the government of Ontario, Canada, has moved to reduce the use of neonic-treated seed for corn and soybean crops by 80 percent by 2017. In its pollinator plan, Minnesota plans a full review of neonic use, including a range of possible negative effects.

For her part, Harriet Behar, the Crawford County farmer and beekeeper, wants to see “a plan with some teeth in it.”

“Neonics have allowed people to ignore good agronomic processes,” she said. “We don’t have to rotate crops anymore. We just kill everything off with neonics.”

Companies may already be moving on to the next new pesticide. Critics call it a pesticide shell game; agrochemical companies describe it as innovation.

In fact, DuPont Pioneer recently announced it had developed a new systemic seed treatment called Lumivia for corn pests which, according to company spokeswoman Jane Slusark, has “low to no impact on pollinators.”

Author: Gardeners can help save the planet

Gardening books come and go, offering much of the same about container gardening, multi-season landscapes, and weed and pest control.

A bee visits a flower at the University of Wisconsin Arboretum.

Farmer and beekeeper Harriet Behar and her husband, Aaron Brin, check on the bees at Behar’s Crawford County farm. Behar has 25 beehives on her 216-acre farm in southwestern Wisconsin.

p class=”wp-media-credit”>Attendees at the 2015 Bee Fest at the University of Wisconsin-Madison Arboretum set out to catch and identify bees. Wisconsin has among the highest annual loss rate of managed honeybees in the country.