Keyona “Key Key” Banks’ life has been, in a word, turbulent.

In her first 18 years, Banks witnessed her mother going to jail twice, lost her father, bounced between foster homes and became pregnant at 14 after being raped.

The strife, for many of us, would seem insurmountable, and while there was grief, trauma, and touch choices made along the way, Banks survived. Now, at 30, she is thriving, with her salon, Ruth Styles, approaching a year in business.

Few things were stable in Banks’ childhood, but doing hair was one thing she shared with her mom, grandmother and older sister. Her skill with braids was something Banks maintained over the decades, and in fall 2019 she started her business, named in honor of her late beloved grandmother, at 1601 Jackson St.

Operating her own salon was something that seemed far beyond reach for most of Banks’ life. Her father died when she was young, and in second grade she was in the car when her mother got pulled over and was taken into police custody. Banks, along with her siblings, entered the foster care system. While the children were largely separated, Banks and her twin sister were able to stay together.

By age 9, Banks was again under her mother’s care in Minnesota, only to be left alone in the house. Her grandmother, Ruth, came and got Banks and her twin sister, but their mother returned and fled with her daughters before being taken to jail and serving 13 months. Keyona again stayed with Ruth until her mother’s release.

But any happiness brought by the reunion was short-lived. Banks disclosed she was raped at 14 and became pregnant with her son. Two years later, her twin sister, who also had a baby by then, chose to move into a foster home with her child, and Banks elected to do the same, as Ruth was ailing and no longer able to take them in.

However, Banks says she didn’t feel comfortable at her foster home in La Crescent and went to a new home in Winona with her son for a period. It wasn’t until her final foster home in Rochester, under the care of a woman named Kelly, that Banks found stability.

Kelly took a true interest in Banks’ wellbeing and success, registering her in programs for teen moms and the Living Independently with Knowledge (LINK) course, which teaches teens and young adults at risk for homelessness life skills and how to meet basic needs, as well as offering employment assistance.

Banks graduated from school before before aging out of the system at 18. In total, she spent six years in foster care.

“The hardest part was keeping my emotions together,” Banks said of the tumultuous time.

After initially studying social work, Banks enrolled in NOVA Academy of Cosmetology in Rochester, where her tuition was covered, but dropped out after six months when her grandmother became ill. For 18 months she tended to Ruth’s needs while working at hotels and taking on assorted small jobs. In 2012, she entered the Salon Professional Academy and was still in school when Ruth passed away in 2013.

By then, Banks and her fiance had had a daughter, followed by a son in 2014. Banks worked at Fantastic Sams and then Sports Clips in La Crosse, enjoying the profession immensely but ready to break out on her own.

“The challenges of my life made me more independent,” Banks says. “It made me want more out of life and recognize my self worth.”

In October 2019, she began renting out a shop on Jackson Street, already mostly equipped from its previous use as a tattoo parlor. In January 2020, Ruth Styles had its grand opening.

Banks, who cuts and styles for clients of all ages and ethnicities, “found customers pretty quickly,” she says, specializing in sew-in extensions, cornrows and other services not commonly offered in the area. Having lived in La Crosse and La Crescent, she had friends and acquaintances who became clients, and found customers through advertising on Facebook and Instagram.

At the time finishing paying tuition loans for the Salon Professional Academy, Banks chose not to take out financing for Ruth Styles, funding her business with money saved from her jobs, side business of making custom t-shirts and frugal lifestyle.

“I pay for the shop, pay for the house, pay for food — we keep afloat,” Banks says of her family. “We budget and don’t spend money like crazy. We don’t always need the finer things.”

Lynnetta Kopp of La Crosse stumbled upon Ruth Styles by accident, seeing the sign while driving and turning her car around to pop in. Kopp usually drove to Minnesota to have braids done and was glad to have an option closer to home. After her first appointment, Kopp was impressed with Banks, noting, “It was just amazing. She was kind, very meticulous. She wanted to make sure everything was just right, and you can tell she always wants her customers to be satisfied.”

Indeed, when Kopp wasn’t fully happy with her braids after one appointment, Banks insisted she come back so she could fix it, with no upcharge, wanting her client “to love it.”

Banks, who says she wants to make her life better so her kids can do better and avoid the trials she experienced and missteps she made, counts on her inner circle to juggle work and parenting. With her friend her sole employee at the moment, Banks tackles styling, answering calls, booking and paying bills at Ruth Styles — “It’s eat, sleep, clip and repeat” — and depends on the support of her cousin, twin sister, friends, fiance and oldest son, who helps out with his younger siblings.

While Banks gives it her all, it hasn’t been easy. She has experienced some racial discrimination, with one person questioning if she had her cosmetology license, and the coronavirus has added another layer of stress, with her children all virtual learning from home and the financial impact felt greatly.

Banks was able to stay afloat selling extensions and styling products for curbside pickup or delivery, and now, following masking, distancing and sanitation protocols at her salon, is limiting walk-in appointments as a COVID-19 precaution.

“When the pandemic hit — oh my goodness, it affected it really bad,”says Banks. “I don’t know how much longer we would have been open.”

It might seem Banks can’t get a break in life, but she chooses to leave hardships and stumbles behind and move forward. She expresses to her children the importance of education, family — blood or not — and learning from the negative.

“You are the only person who can make your future,” Banks says. “We’ve been through some crazy things and I’m still here and I’m healthy as an ox.”

Kopp, who is now a loyal customer and has referred many to Ruth Styles, marvels at Banks’ attitude.

“This young lady is just amazing,” Kopp says. “She doesn’t let where she’s been define where she’s going.”

The largest living thing on earth is edible and underground

The largest living thing on earth is edible and underground 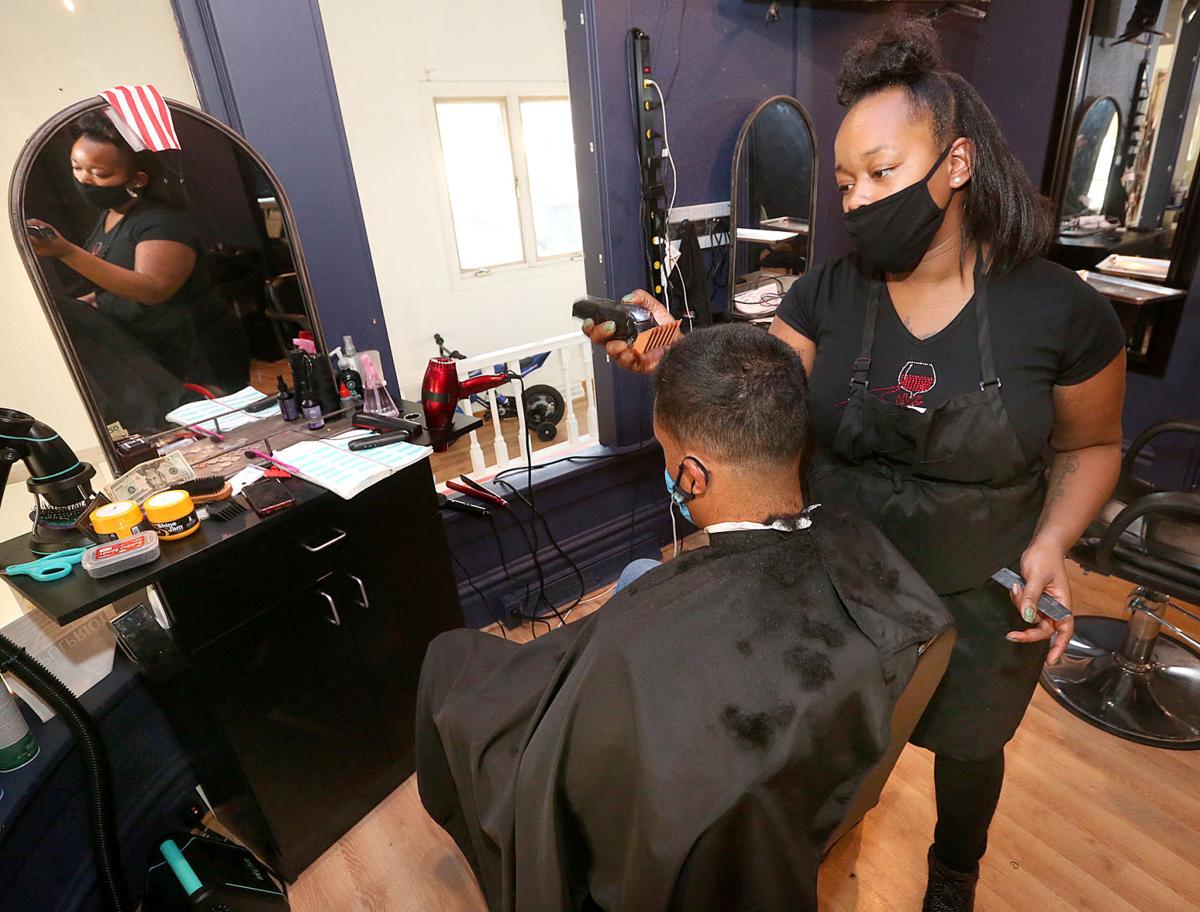 Keyona Banks cuts a customer’s hair in her salon at 1601 Jackson Street. Banks grew up in foster care and was a teen mom, but despite these challenges graduated from the Salon Professional Academy and opened her own salon last year. 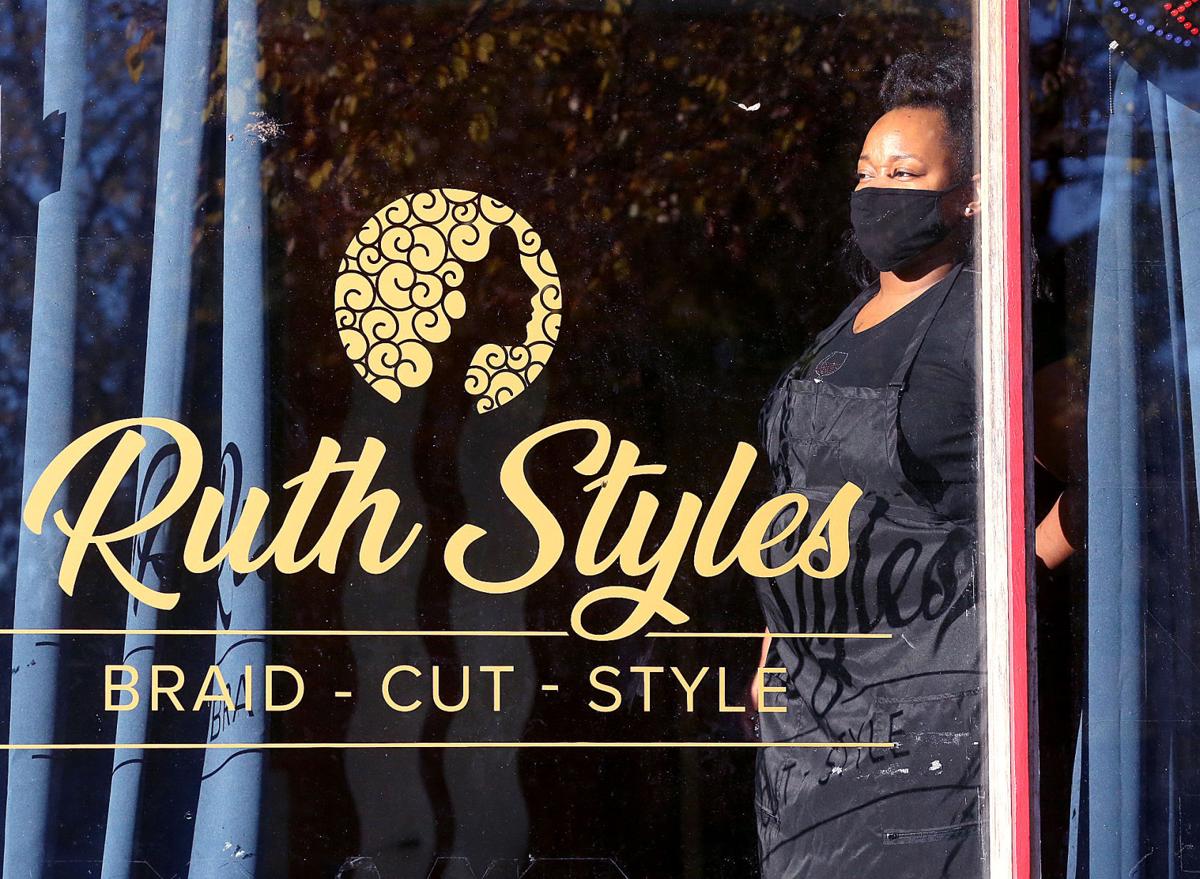 October marked the one year anniversary of Keyona Banks’ business, Ruth Styles, a salon named after her late grandmother.