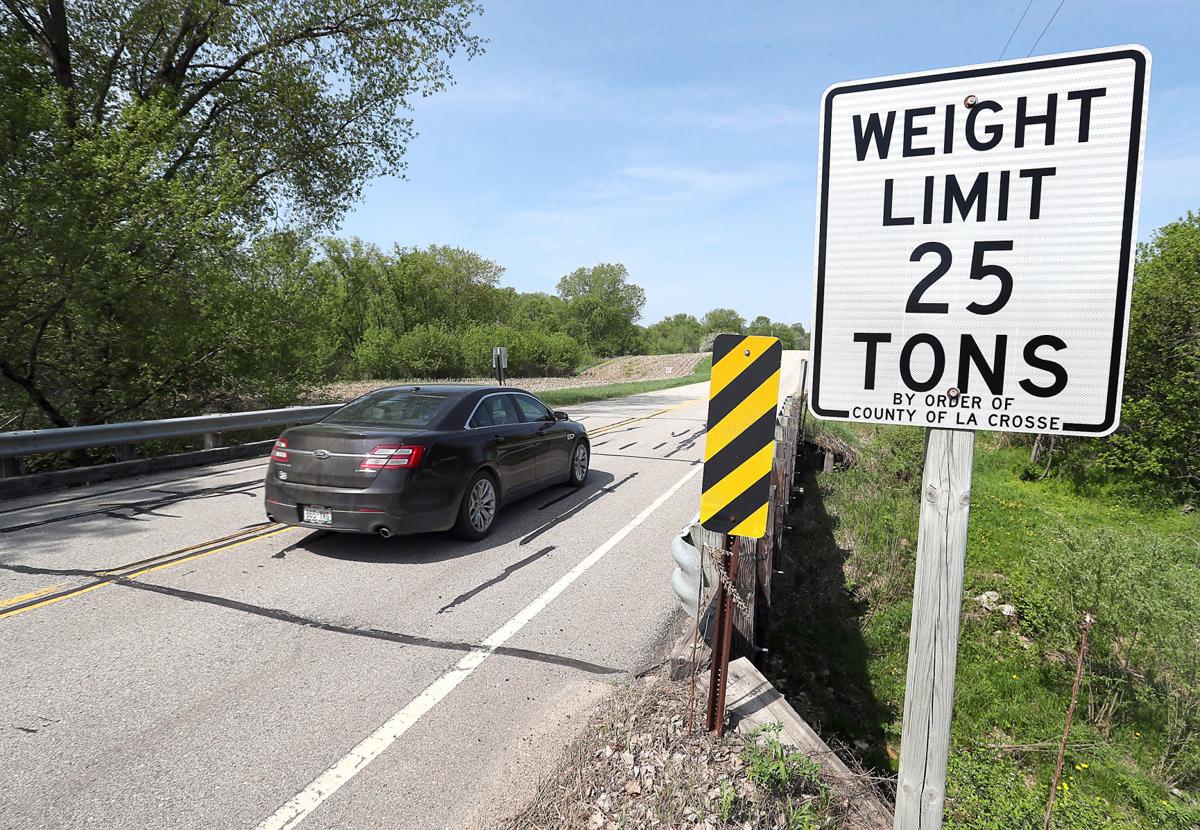 A car crosses a bridge over Sour Creek on Hwy. V near Stevenstown. Transportation officials have lowered the weight limits on dozens of bridges throughout western Wisconsin as part of an ongoing response to the use of multi-axle trucks that pack more weight into a shorter distance, creating more stress on bridges. 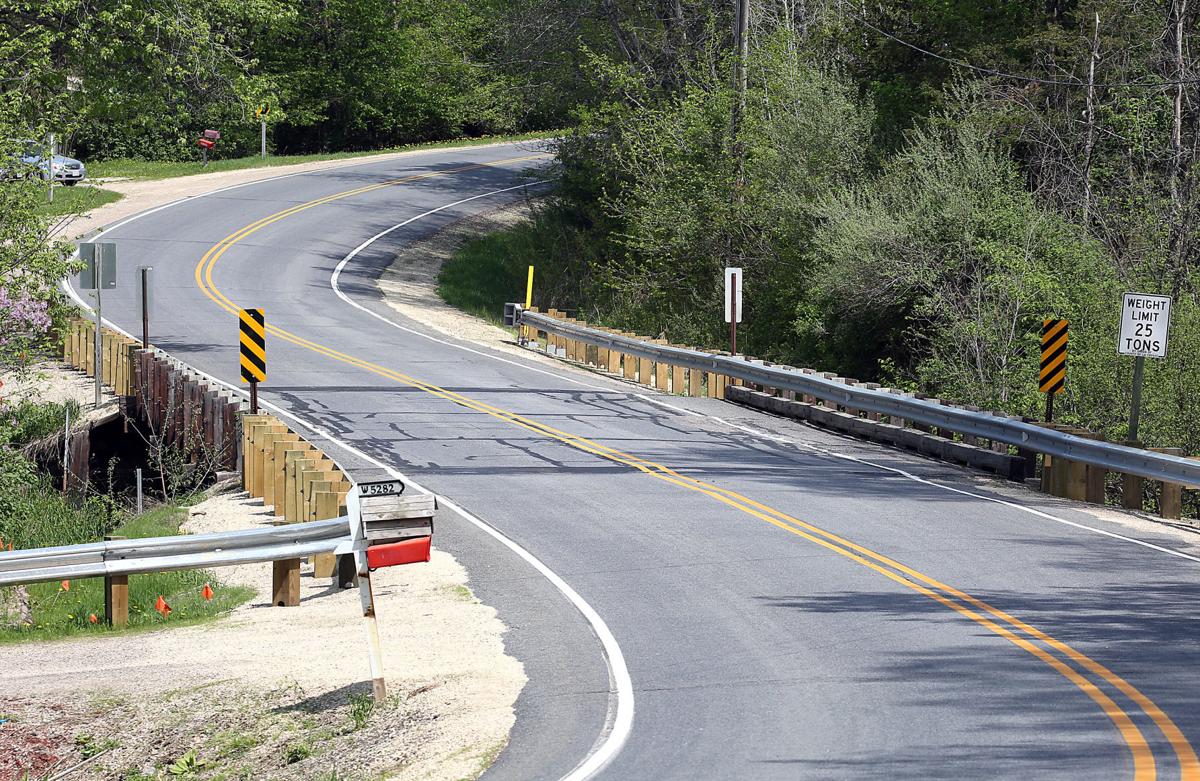 A bridge on CTH T in Stevenstown. Transportation officials have lowered the weight limits on dozens of bridges throughout western Wisconsin as part of an ongoing response to the use of multi-axle trucks that pack more weight into a shorter distance, creating more stress on bridges.

It’s not crop prices that keep Shane Goplin up at night. It’s infrastructure.

Goplin, who grows corn and beans on about 3,000 acres in northern Trempealeau County, has seen the drive to his fields quadruple thanks to weight limits that keep him from driving trucks and harvesters across aging bridges.

New weight restrictions were placed on nearly 200 Wisconsin bridges — most on county and town roads in the western part of the state — this spring as highway engineers try to account for the strain from newer trucks that use tightly-spaced axles to carry more weight in a smaller frame.

As a result, farmers and truckers have been forced to take detours to get their products to market and haul half-filled loads from “landlocked” fields.

“This is a very serious concern for us. We want to make sure farmers can get to and from their fields,” said Rob Richard, senior director of governmental relations for the Wisconsin Farm Bureau. “If they can’t make the quickest, most efficient route they’re just adding wear and tear to other roads. … then it becomes a larger issue.”

State transportation officials have spent the past several years re-evaluating bridges to meet a 2018 deadline set by the Federal Highway Administration. The aim is to come up with load limits that take into account “special haul vehicles” — such as milk tankers, garbage trucks and cement mixers — with five, six or even seven axles, which allow them to carry more cargo without the need for a trailer.

While more economical for haulers, these newer designs concentrate weight in a much smaller footprint, which can put significantly more stress on short-span bridges, particularly timber and steel frame designs.

“You’re making the worst of the situation — it increases the pressure,” said Ed Lutgen, an engineer with the Minnesota Department of Transportation. “The bridge can carry a heavier load as long as you spread it out.”

The Wisconsin DOT analyzed more than 2,000 state and local bridges, recommending changes to load limits on about a quarter.

“None posed an immediate safety concern, but each recommendation was made in the best interest of preserving the infrastructure and limiting unnecessary maintenance in the future,” said WISDOT spokesman David Hunt. “Many of these bridges were designed years ago without anticipating the multiple combinations of axles on today’s SHVs.”

The DOT actually recommended that weight restrictions be lifted on 348 bridges where the analysis showed they were stronger than previously thought.

Three quarters of Wisconsin’s 184 down-graded bridges are in the western part of the state, and nearly a third are in the Driftless Region, according to a Tribune analysis. Trempealeau County has 18, more than any other county. La Crosse County has eight.

The reason is primarily a function of geography: The hilly terrain features more rivers, creeks and streams to cross.

“There are more bridges in this neck of the woods,” said La Crosse County Highway Commissioner Ron Chamberlain, who thinks design may also be a factor, with certain types of bridges being favored by DOT engineers responsible for different parts of the state.

“It is frustrating,” said Neal Kedzie, president of the Wisconsin Motor Carriers Association, the trade association representing truck owners. Kedzie said milk haulers, who use the same rural routes as farmers, would like to haul heavier loads.

“You can increase weights, but can the infrastructure handle it?” he said. “We’d rather err on the side of safety rather than expediency.”

The Minnesota Department of Transportation has analyzed about 4,300 of the state’s 15,000 locally-owned bridges, which has resulted in new weight restrictions on about 1,200. But unlike Wisconsin, MNDOT uses a more surgical approach, imposing separate weight limits for single-unit trucks, semis and double-trailer vehicles.

Hunt said Wisconsin uses a single posting system to make it easier for drivers and law enforcement to interpret what’s allowed on a bridge.

“Really it just comes down to simplicity,” he said.

Goplin, who raises feed for a 900-cow dairy in Pigeon Falls, has to move large quantities of manure and crops between his barn and fields about four miles away. When bridge restrictions made that route impossible, his second option was a windy, hilly road in bad shape.

Now there are restricted bridges on his third and fourth options, leaving him to drive 17 miles into Whitehall and back.

“For now we’re just going to be loading light and hope they’re going to be able to repair that bridge for harvest,” Goplin said.

Jackson County farmers who haul their crops to grain terminals in La Crosse have also felt the pinch.

Clint Sampson, who runs a crop and beef operation in Melrose, said the detours have added about half an hour to his drive, which works out to about one less load per day even though he still pays his drivers the same amount.

Sampson said he also has fields — “you could call them landlocked” — where bridge limits prevent him from taking out full loads.

“Our roads are all junk, too. These county roads are wore out,” he said. “The roads haven’t been touched for 30 years. Some of them are beyond patching up.”

With an annual road budget of just $117,000 to maintain 40 miles of road, Hesse said the town doesn’t have the money to replace the 31-year-old road, which is already in poor condition. So the town board designated it a Class B route, which limits non-local traffic to 60 percent of legal load limit.

“There’s a lot of detouring going on,” Hesse said.

Of the nine La Crosse County bridges originally recommended for lower weight limits, the county was able to modify one — a timber bridge on a dead-end road in the town of Onalaska — with what Chamberlain called “a cheap fix.”

But a report from an engineering firm concluded it would be economically infeasible to fix five to six of the remaining bridges.

Chamberlain has not estimated the cost to replace the five county-owned bridges, but with a budget of just $6.5 million to address more than $100 million in estimated highway needs the county is not in a position to fund additional projects.

On Friday Gov. Scott Walker announced a list of 113 bridges slated for replacement with $76.4 million in state assistance. But only eight of the 184 restricted bridges are on Walker’s list.

“It’s unacceptable in an agricultural state like Wisconsin that we have no schedule for when these bridges are going to be replaced,” said Craig Thompson, president of the Wisconsin Transportation Development Association, a coalition that supports increased investment in the state’s transportation network. “We need a schedule.”

“Everybody seems to admit there’s a need,” he said, though they can’t agree to a solution.

Bill Freise, who hauls about 150 to 175 truck loads of grain to La Crosse each year from his Melrose farm, said bridge postings in recent years have forced him to find a series of new routes.

“That’s not the end of the world. But someplace along the line we have to address our infrastructure,” Freise said. “What we’re looking at here is just the tip of the iceberg.”

A car crosses a bridge over Sour Creek on Hwy. V near Stevenstown. Transportation officials have lowered the weight limits on dozens of bridges throughout western Wisconsin as part of an ongoing response to the use of multi-axle trucks that pack more weight into a shorter distance, creating more stress on bridges. 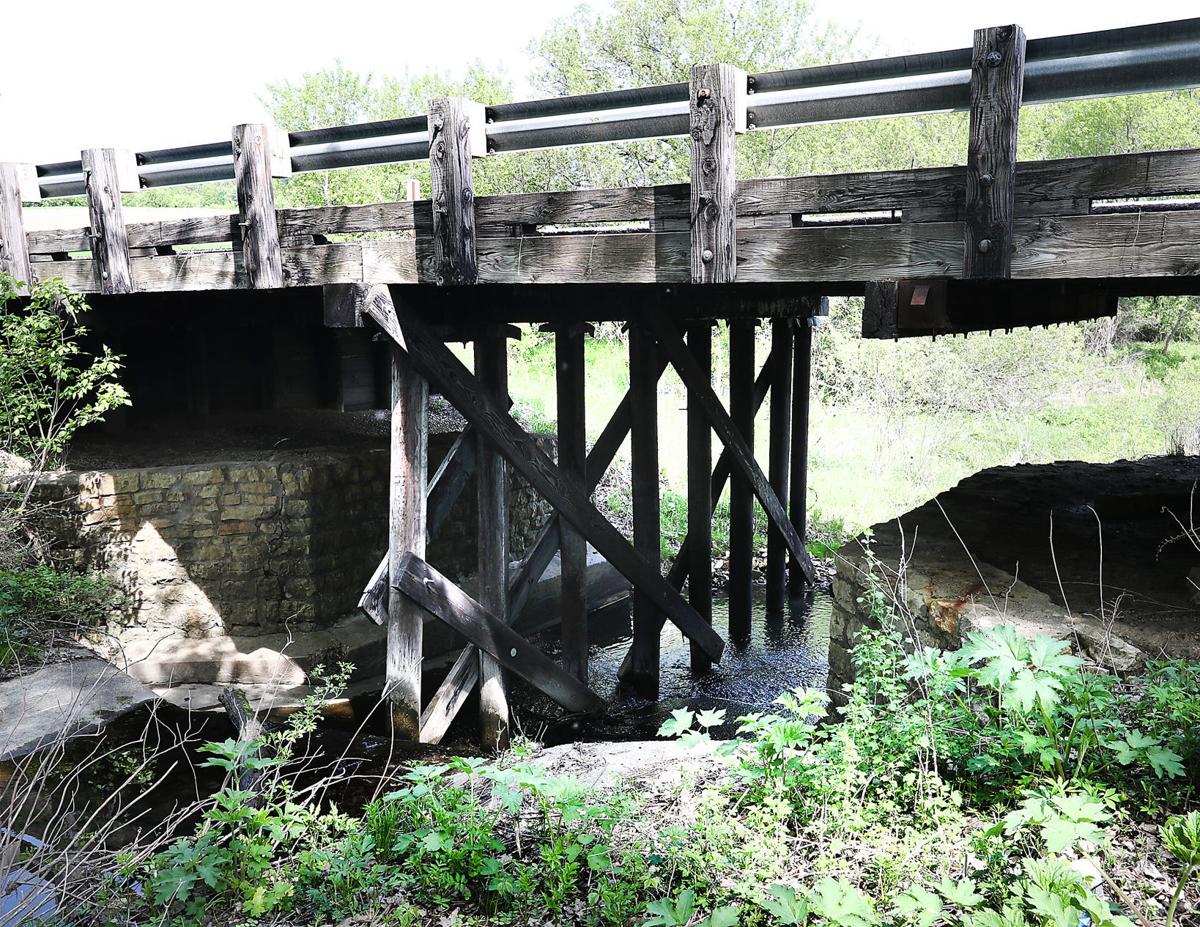 The bridge over Sour Creek on Hwy. V near Stevenstown. Lower weight limits on some bridges have resulted in headaches for area farmers.

A bridge on CTH T in Stevenstown. Transportation officials have lowered the weight limits on dozens of bridges throughout western Wisconsin as part of an ongoing response to the use of multi-axle trucks that pack more weight into a shorter distance, creating more stress on bridges.

Short haul vehicles are single-unit trucks that use multiple axles to carry up to 77,500 pounds, or the equivalent of a tractor-trailer.