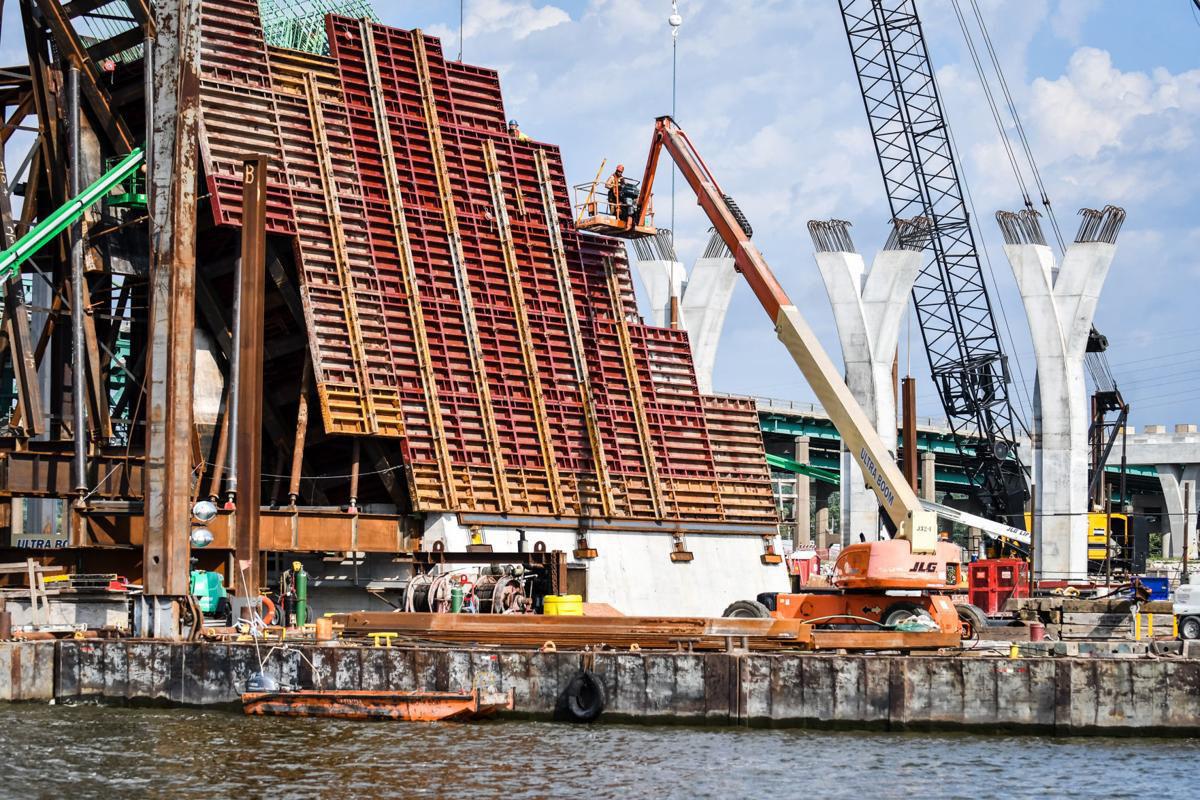 Work continues last week on the foundation for the basket-handle arch on the westbound span of the new Interstate 74 bridge. 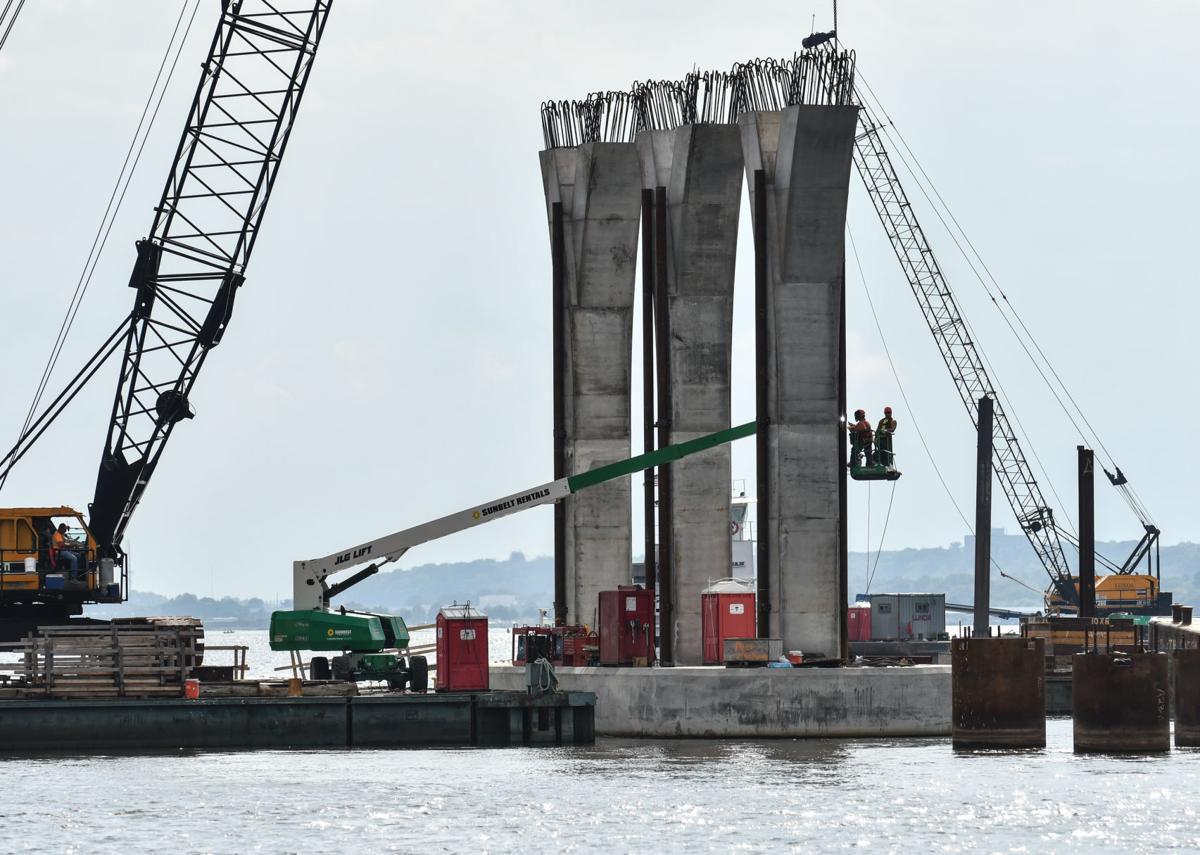 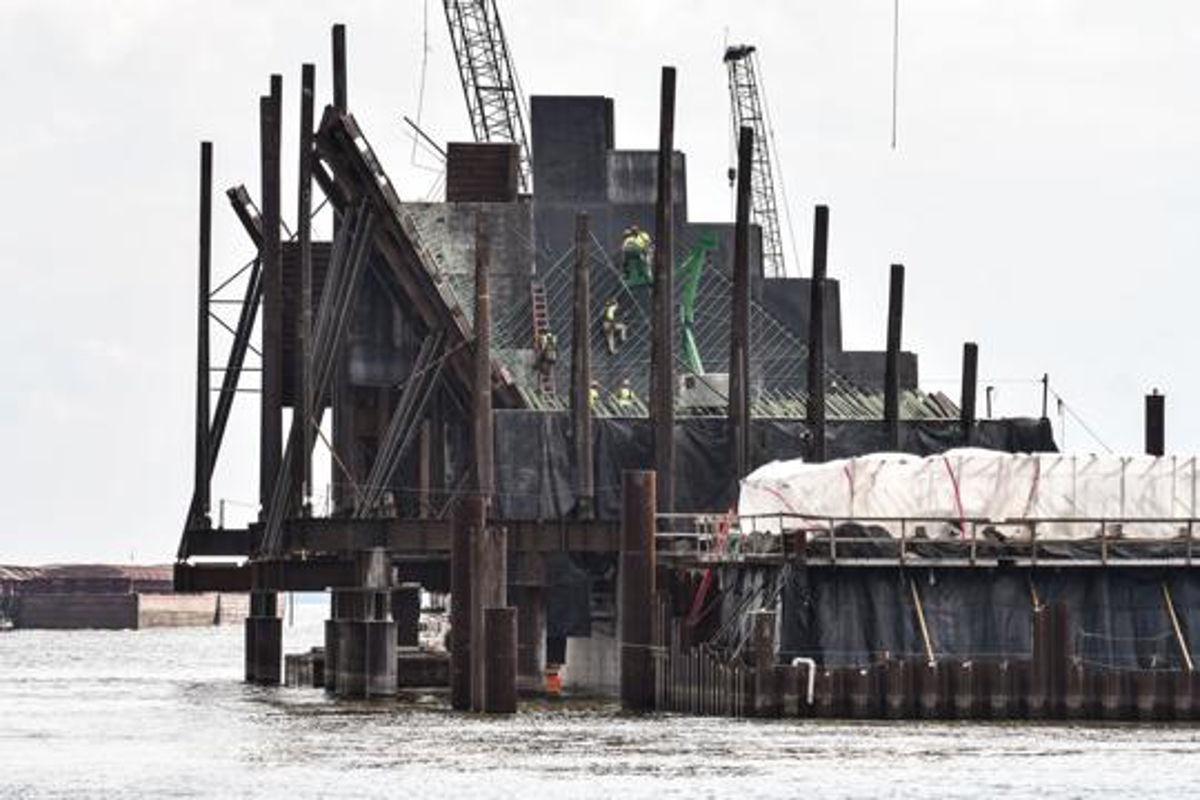 Workers weave the rebar last week for the IIllinois-side arch of the new Interstate 74 bridge.

BETTENDORF, Iowa — It’s hard not to look, but the Iowa Department of Transportation discourages craning one’s neck while driving to catch a better view of the work on the new Interstate 74 bridge between Bettendorf and Moline.

“Don’t rubberneck,” said Danielle Alvarez, Iowa DOT I-74 project manager. “There are better, safer ways to enjoy the project without having to find out what the deductible is on your car.”

One option is boarding the Channel Cat Water Taxi, an open-air ferryboat that passes the attention-grabbing site on the Mississippi River multiple times every day.

Before severe weather rolled last Tuesday, Alvarez led a two-hour tour through the area for about 40 people who reserved their seats months in advance. The engineer covered the planning, design and ongoing buildout of the $322 million bridge, which features two four-lane spans, each 3,400 feet in length with two 164-foot-tall basket-handle arches.

The Iowa DOT awarded the contract to Black River Falls-based Lunda Construction, marking the largest deal in the state agency’s history; Illinois is covering about 50 percent of the costs. The job officially began early last summer, and it’s expected to finish at the end of 2020.

Crews are working 24 hours a day, six days a week to stay on schedule.

“We will work every day we can,” Alvarez said, noting she can’t control flooding or labor shortages, among other surprise delays. “We don’t have a choice when we only have three-and-a-half years to get the project done.”

The bridge is a primary piece of a larger $1.2 billion I-74 corridor project. At completion, there will be three lanes in each direction between 53rd Street in Davenport to a mile south of Avenue of the Cities in Moline.

A spot on one of these popular Channel Cat Talks, organized by River Action Inc., Davenport, may be one of the hottest tickets this year in the Quad-Cities. The latest excursion marked Alvarez’s third presentation since early June.

After the first four sessions sold out, River Action added four additional outings in September, which sold out in about a week, program manager Laura Morris said. While the regular season of Channel Cat Talks officially ends Thursday, the organization plans to offer additional guided tours of the water-based construction site next year.

As crews worked on the new bridge Tuesday, a contracted team from the firm Burges & Niple inspected the existing one, which carries about 45 percent of cross-river traffic in the Quad-Cities, Alvarez said.

Those who travel from Illinois to Iowa for school or work should expect longer commute times next year when the existing Iowa-bound span is reduced to one lane.

“2019 is when I become the most popular lady in the Quad-Cities,” Alvarez said.

In 2020, the new westbound span will carry both directions of traffic until the eastbound span is finished, she said.

The eastbound span, when completed, will include a 14-foot-wide multi-use path for cyclists and pedestrians.

Meanwhile, Alvarez is eager to see the basket-handle arch of the westbound span rise above the water in the coming months.

Sitting in the front row of the Channel Cat, Joyce Holland of Bettendorf took note of the changes since her last tour with Alvarez in June.

“I just think it’s interesting we have a bridge being built in three-and-a-half years, and this gal can give us all the answers about it,” Holland said. “It’s great for our area.”

Work continues last week on the foundation for the basket-handle arch on the westbound span of the new Interstate 74 bridge.

Workers weave the rebar last week for the IIllinois-side arch of the new Interstate 74 bridge.