Downtown La Crosse looks a little more bustling this week, as shoppers started to fill the sidewalks, gift bags and to-go orders in-hand, after certain shops were allowed to reopen after weeks of being closed.

Gov. Tony Evers announced the move on Monday, allowing retailers that weren't considered essential to open to just five customers at a time.

Many shops in La Crosse jumped on the move, propping their doors open to the sidewalks and flipping on the neon "OPEN" signs once again, and others started making plans to do the same later this week.

“Honestly, it caught everybody by surprise,” said Jim Mccauley, who has owned River City Hobbies for the last five years.

Mccauley said he was taking his time to reopen the game shop on May 26 before this newest order came in somewhat suddenly.

The shop on Main Street had been doing curbside pick-up for the last month, especially with the uptick in requests for puzzles and family activities to keep people occupied at home. But he said customers were ready for in-person shopping.

“About a half an hour later, we started getting phone calls from customers saying, 'Will you be open tomorrow?' So it was a late night on Monday” getting the store ready, he said.

For Ashley Dzurko, who has owned Willow Boutique on 2nd Street for just shy of a year, hearing about the order felt like “the first day of school” for her.

"It didn't seem like it was ever going to happen," she said. “I just was antsy, excited, kind of nervous. But overjoyed."

A newer business in town, the shutdowns were an uneasy learning experience for Dzurko and her shop. The store lost about 85% of its business while shutdown — not unlike many of its retail peers.

"Obviously this whole situation isn't ideal to happen in your first year of ownership. It definitely kicked my buns to get an online store going, and just to get really creative with how I promote the clothing to customers," she said.

Business was "really solid" at the boutique for the past few days, according to Dzurko, which was similar for business at River City Hobbies and other downtown shops like Deaf Ear Records and Kroner's Hardware, many reporting that their loyal customer base didn't forget about them.

"I was glad to hear that they were going to reopen," Sarah Nestinger said. Nestinger is a piano teacher in Westby, who said she buys a lot of her music from Leithold's Music downtown.

"I could order music online, but it's nice to be out and shop," she said.

Wearing a homemade mask, Nestinger was on her way to make a return and check and see whether a few stores were open, and she said taking her time was a nice change of pace.

"Go in, go out. They really are encouraging that right now, and it's very different," she said.

But with Evers’ loosened closures came restrictions, such as limiting just five customers at a time in the store.

“We’ve only had to ask one person to leave,” said Joseph P., who is the manager at Deaf Ear Records, a record and smoke shop that has been downtown for over 50 years.

Joseph said hearing about the reopening was both “a blessing and a curse” for him.

“I’m glad to be back at work. I’m glad to see some of my regulars again. But these are trying times,” he said, wearing a mask while he organized records, “it’s like, we want to do it, but we want to do it right, and keep everyone safe and healthy.”

Most stores that opened their doors this week had signs up reminding customers of the limitations, and some had their own standards in place. At River City Hobbies, masks were required to enter the store and shop.

“We joke around that superheroes wear masks around here,” Mccauley said.

He said they haven’t received any pushback about the mask rule yet, but knows there are negative feelings floating around about such requirements, and has trained his staff to manage any complaints properly.

“Some people feel like you’re infringing on some constitutional right," Mccauley said. "You know, we just want to keep people safe. We don’t want someone to get sick because we didn’t adhere to something that was safe to do for everybody."

For smaller shops, like Willow Boutique and Dan’s Shoe Repair, they don’t see the shopper limit causing any problems.

“It’s not a big place to begin with, there’s not a lot of room,” said Dan Grogan, who has owned Dan’s Shoe Repair for the past 10 years.

The repair shop is small, a counter that greets you almost as soon as you walk in the door, and wall-to-ceiling shoes. But most of Grogan’s business is orders to repair boots and shoes — and odds and ends such as toboggans and suitcases — so he only ever has two or three customers in the shop at a time.

The same is true for Dzurko at the boutique, a rectangular shop that is spacious enough for browsing through the chic clothing hanging on the walls. But as a boutique, she said there's usually never more than one shopper and an employee in the shop at a time.

“I feel for the stores that are going to have to get really creative with,” the shopper limits and spacing, she said. “But it’s not something that I will have to worry about.”

Although the dial is slowly turning across the state, business owners are feeling skeptical about the summer.

“It’s going to be a slow climb back up,” Mccauley said. “I think a lot of it is; most people are so trained that everything is closed.”

Part of River City Hobbies's business is a gaming room where groups can play games together. But despite these reopening orders, that’s still closed for the foreseeable future, and he’s not sure his regular business will pick back up until next year.

“We’ve just got to work our way out of it, and we’ve done that before,” Grogan said. He bought the shoe repair shop 10 years ago, just as the country was recovering from the 2008 financial crisis.

After businesses started to close in March, Grogan had to pick up a side job cutting trees to make ends meet, and he and his part-time employee started making masks in the shop to donate, while keeping up with the minimal work the shop was bringing in.

“I don’t think a lot of it’s going to come back,” he said of his niche business. Many of his limited orders have been shipped to customers out of town, and he’s worried that shoppers will continue the trend of buying online or through delivery.

Other niche stores are trying to balance the business model against the tumultuous times, too.

“What really is hard for clothing stores, is our really tough months are January and February. So, then to have a really tough March and April is just catastrophic to some of us,” Dzurko said of her boutique.

“I think it will be a hard summer. I really do,” she said, adding that she’s had to rethink the way her customers will shop this summer, cancelling old orders of dresses and skirts and placing new orders of more casual clothing.

“It was a ghost town down here,” said Mark Flottmeyer as he fixed a large sign onto a ladder in front of Kroner’s Hardware.

For several months, Kroner’s Hardware was one of the few shops still open downtown, hardware stores deemed essential under Evers’ safer-at-home order. He said he hopes that business will pick back up at the shop as more stores open.

“I think customers are ready to get out, even if it is just to a little store downtown,” Dzurko said. “They just want to get out of the house, and they kind of want to spend a little money, too.”

“If you’re a comic fan and you’re used to coming in and picking up your comics every Wednesday, and then for two months you couldn’t?” Mccauley said, noting that customers are antsy to find even a bit of normalcy.

“We’re all in this together, no matter what,” Grogan said. “No matter what side of the political aisle you’re on. It’s very grieving to me to see people politicize it, and point the finger and blame it on someone. You can’t do that with this.”

“We need everybody now more than we ever have,” Dzurko said, “and if we want to continue to see La Crosse flourish, we really have to start supporting small.”

While leaving Dan's Shoe Repair, Grogan replied to the hopeful wishes that more customers will start coming in, reassuringly over the bell of the door, "they will."

+32 Photos: A look at the effect of the COVID-19 pandemic in the La Crosse area

The May 31 event was hosted by the Wisconsin National Guard and funded by the federal government.

Photos: Election Day in La Crosse and elsewhere in Wisconsin

Wisconsin voters woke up Tuesday with the choice to still head to the polls for the spring election, despite the present threat of the COVID-1…

“I think customers are ready to get out, even if it is just to a little store downtown. They just want to get out of the house, and they kind of want to spend a little money, too.” 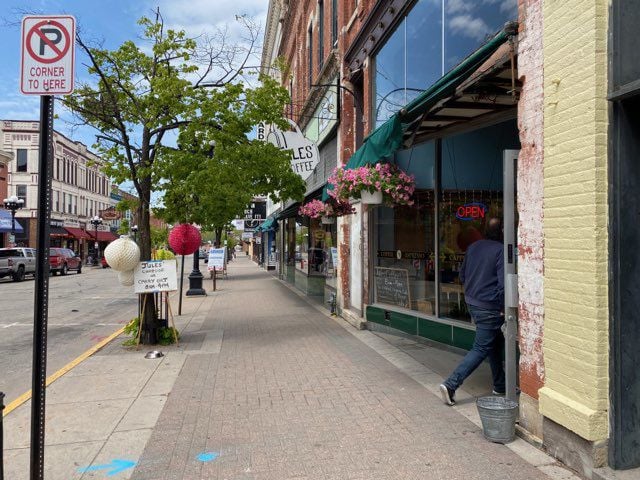 Business owners sprawled signs and decor along the downtown sidewalks, hoping to remind customers that their doors are finally open. 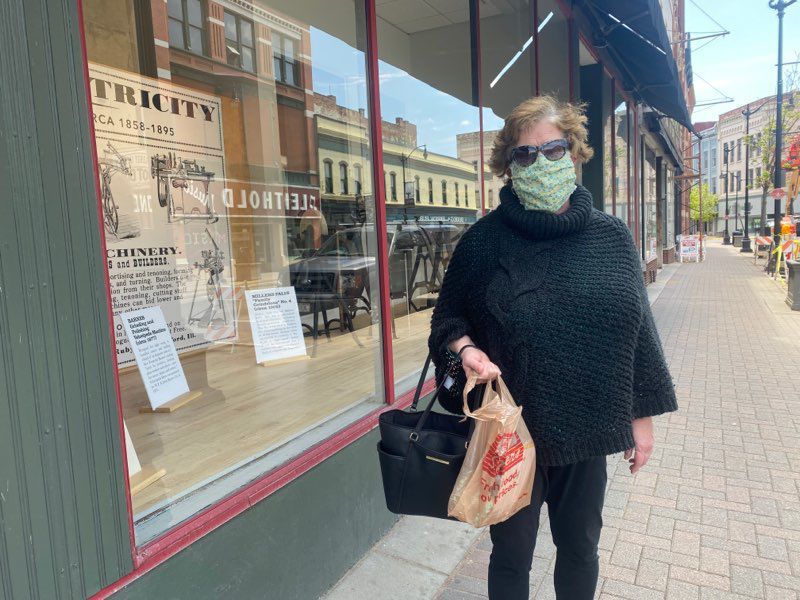 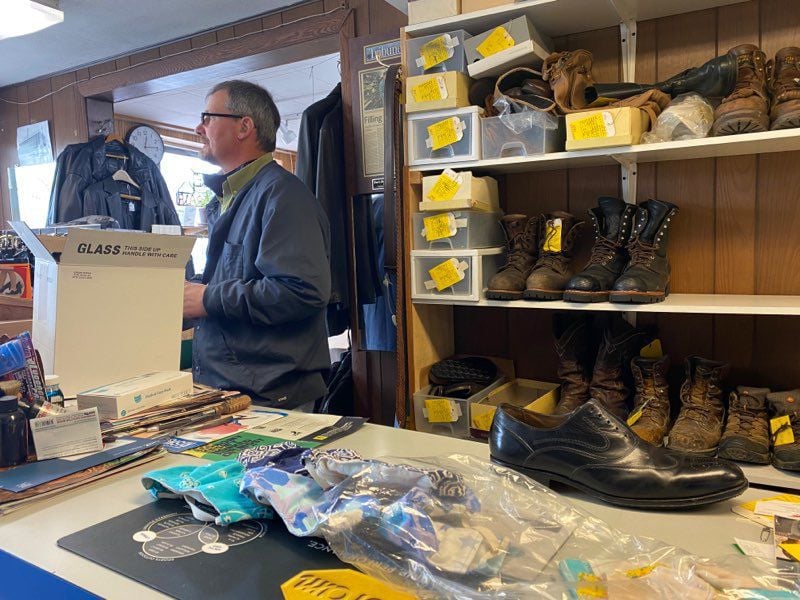 Dan Grogan, who has owned Dan's Shoe Repair for 10 years, has been making masks for donation in his shop, as orders have slowed dramatically in the past few months. 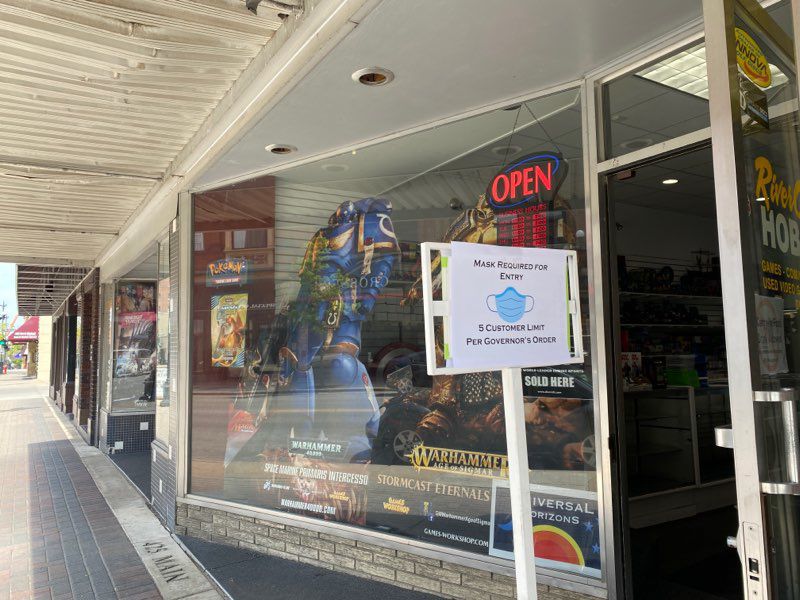 One of the first shops to reopen downtown, River City Hobbies, warns customers before entering the store that they must be wearing a mask to shop. 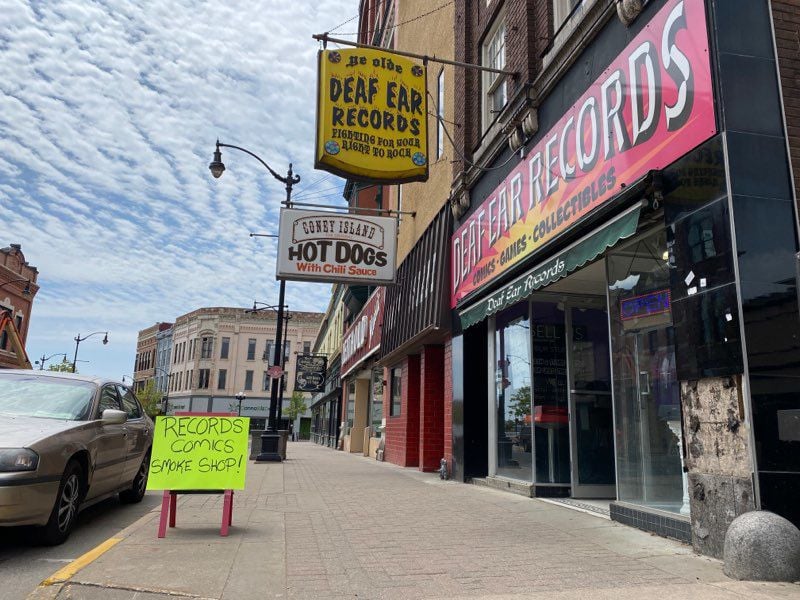 A bright, neon sign draws customers in to Deaf Ear Records, open for the first time in months for browsing through its unique record collections.