After decades of debate, it took just four days last week for La Crosse city officials to decide that it’s time to remove the Hiawatha statue from Riverside Park.

It’s a discussion community leaders and residents have been having since it was erected nearly 60 years ago, many sides debating whether to remove it because of its inaccurate depiction of local Indigenous groups, or to maintain it to honor a local artist’s work.

Mayor Tim Kabat has been seeking a compromise for a couple of years to move the statue, and on Monday he called for its removal. On Thursday, the city’s park board unanimously agreed.

The statue’s controversy — both passionate defense and strong objection — goes back to its beginning.

The 25-foot statue, which was commonly known as the “Big Indian” in the past, has stood on the north end of Riverside Park since 1961, where the Mississippi, Black and La Crosse rivers come together.

And though some argue that the statue was created to honor the Indigenous people who first inhabited the La Crosse area, records show otherwise.

In 1956, the La Crosse County Chamber of Commerce commissioned the statue through local artist and teacher Anthony Zimmerhakl, with the main intent to attract more tourism in the city.

Even down to its exact location and name choice, decisions were made based on best marketing practices, city officials at the time likening the sculpture to other tourist attractions like Paul Bunyan lore across the Midwest and Walt Disney’s stamp across the country.

In the early 1960s, city officials ultimately decided to erect the statue in Riverside Park instead of Houska Park, partly because of its proximity to where the La Crosse, Black and Mississippi rivers meet — not to celebrate the natural marker, but instead to use it as a public relations tool.

The northern end of Riverside Park would “provide a natural background for our ‘Indian.’ That he’ll be seen where ‘three rivers meet’ has definite story values for publicity releases, and it’s highly important that the statue will be visible from the interstate bridge and cast its impressive shadow over the ever-increasing boat traffic,” the chamber wrote in a press release in 1960.

But even more, the naming of the statue was also initially seen as a marketing tool, not as a way to honor the Indigenous people who originally inhabited La Crosse, since there is no record of Chief Hiawatha in the area.

City officials at the time argued the name Hiawatha would be widely known across the country because of an epic poem written in 1855 by author Henry Longfellow about a fictional Native American character named Hiawatha.

There is a real Indigenous leader named Chief Hiawatha who led the Onondaga tribe in Northeastern America, but there are no records of him in the La Crosse prairie.

“Hiawatha would be an easy thing to sell,” a Tribune article from 1961 reported a city official saying, and another record quotes an official saying people from “1,200 miles” would recognize Hiawatha more than the name of any local Indigenous people.

Other reasoning included labeling La Crosse as the “gateway” to the Hiawatha Valley, a scenic highway through southern Minnesota.

Some advocated that the statue should instead be named after Indigenous people who did inhabit the La Crosse area, like the Decorah, Winnebago, Winneshiek or Blackhawk, but officials instead thought Hiawatha would be more recognizable by people all over the country.

Others have long pointed out the inaccuracy in the way the statue is depicted, saying it is a caricature-like image of Native Americans, and that its wardrobe doesn’t accurately represent any one specific tribe, but rather a “mish-mash of many different tribes.”

“Indigenous people are not just a single society,” Conroy Greendeer Jr., a legislator with the Ho-Chunk Nation, told the La Crosse parks board on Thursday. “It does not reflect our people, and perpetuates harmful stereotypes.”

“We should be factual and not resort to fictitious advertising gimmicks to induce tourists and mislead their children,” city official Lloyd White is reported saying in the ‘60s.

“Naming the La Crosse Indian statue Hiawatha, he said, would be like when tourists at the Dells buy an Indian souvenir and turn it over only to read, ‘Made in Japan,” White was also reported saying at the time.

Instead, officials argued that because Hiawatha was such a notable and well-known Indigenous leader, it could represent all Native Americans, which wrongly feeds into the idea that all tribes and native people are homogenous, erasing the historical differences and uniqueness of the Indigenous groups that actually inhabited the La Crosse area.

Despite these quandaries, the statue was erected in late 1961, with a plaque highlighting the different Indigenous tribes of the area, but doesn’t explain the connection to Hiawatha. The plaque is no longer there.

The debate about the statue continued again in 2000, when the community found out the city would be spending $35,000 for maintenance on the statue.

Some of the uproar stemmed because of confusion about who had the financial burden for upkeep of the statue. When it was first built and unveiled in the ‘60s, the chamber said it took full responsibility for the artwork and any maintenance.

But records show that as early as 1975, the city’s Parks, Recreation and Forestry Department was the only entity paying for its upkeep.

And, more records indicate that members of the public donated thousands of dollars for its renovations two decades ago.

But largely, those opposed did not want the city to keep maintaining a statue they had been claiming wrongly appropriated Indigenous culture for the sake of tourism for many decades already.

“I do admire the artwork,” Tracy Littlejohn said during that debate two decades ago, “but it was at a time when racism was still a big part of the nation. Now it does not have a place here anymore.”

Today, the statue has been towering at 25 feet for nearly 60 years, and those who argue to keep it don’t want to see an iconic landmark in the city go, and want to preserve it as a piece of art.

“Over the past 60 years,” said Scott Brouwer, an archivist at the La Crosse Public Library who contributed to the research for this story, “nostalgia for its presence in Riverside Park has turned it into a much more important historical totem of La Crosse history to many people than it was originally intended.”

Leading up to the Thursday night board meeting, council president Martin Gaul wrote a letter in response to the mayor’s request, calling to preserve the statue as a “city landmark representing American folk art, nothing more or less.”

Gaul suggested adding other artwork around the statue to better represent the community, and applying signage to the area to be more transparent about the area’s native culture.

Another request called to nominate and protect the statue under historic preservation, but legalese indicated that it could still be removed despite that title.

The city will now seek to replace the statue with something more representative, educational and representative of the Indigenous people of La Crosse.

Littlejohn, who has objected to the statue for years, told the park board Thursday night: “No longer is it OK for a society to tell me how I feel. No longer is it OK to tell my children how they’re supposed to feel. It is not an honor to us. It does not teach anything. People don’t learn about the Ho-Chunk people because they see a statue. It was a tourist attraction not meant to teach anything.”

A look back: History of the Hiawatha statue

'It looks so real' 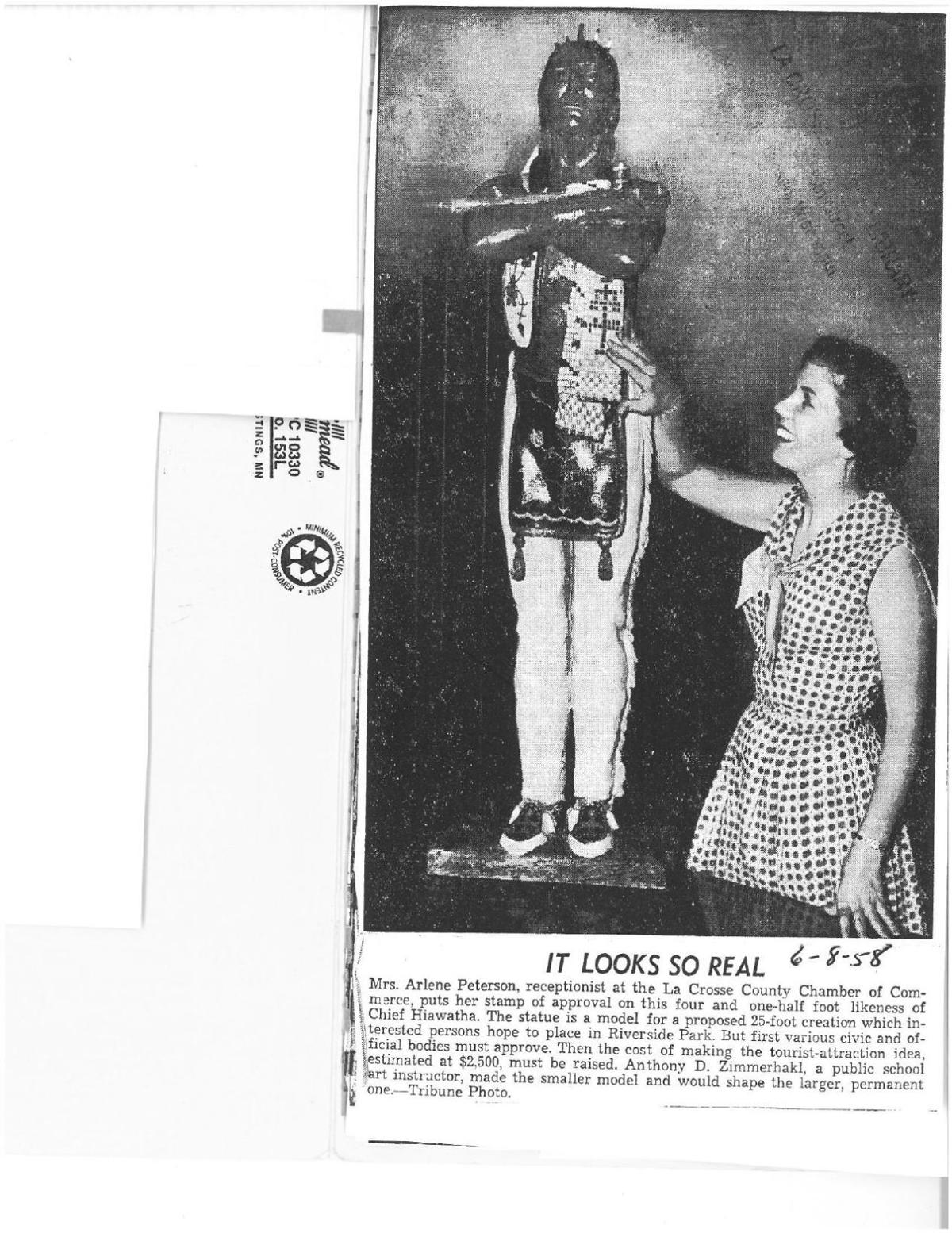 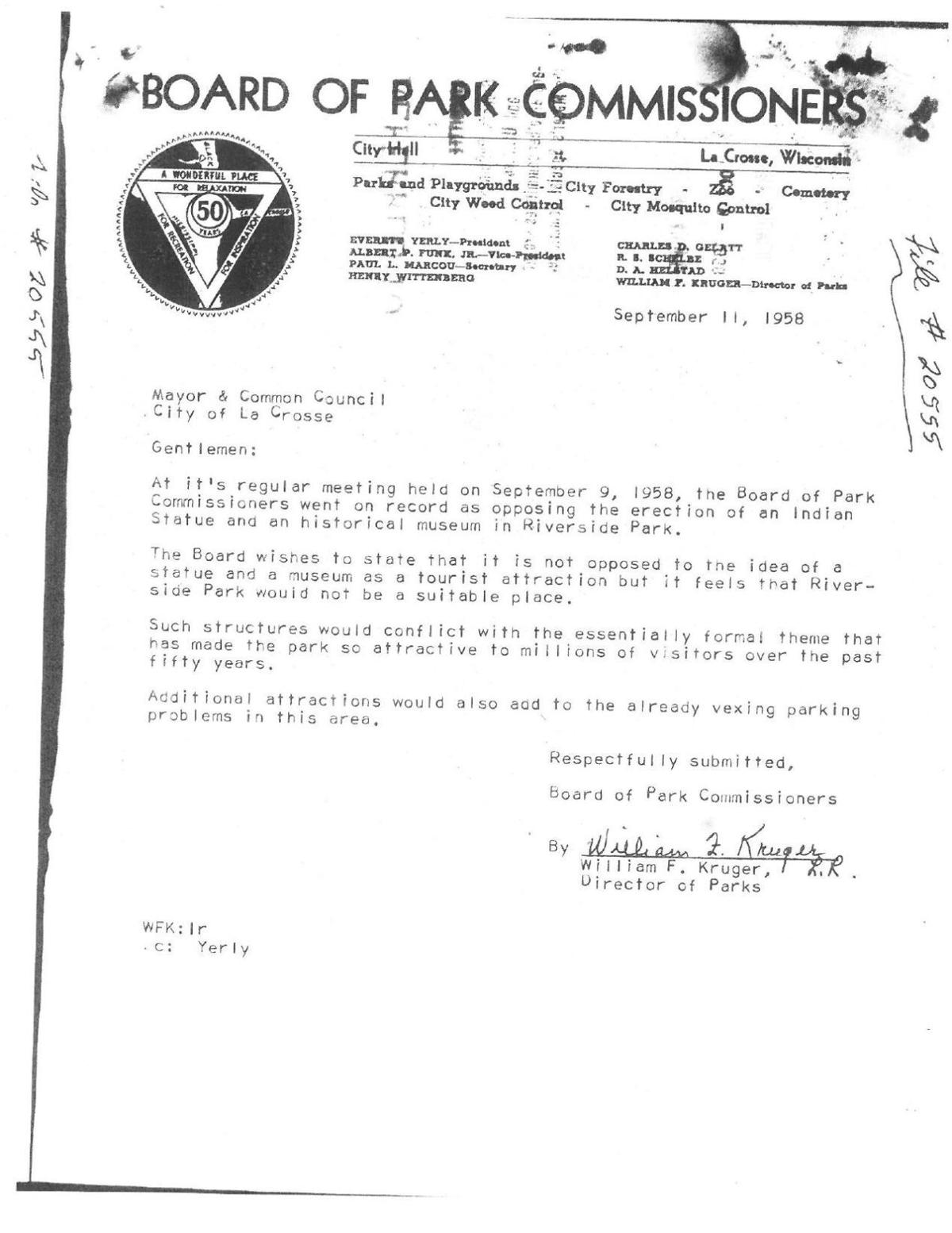 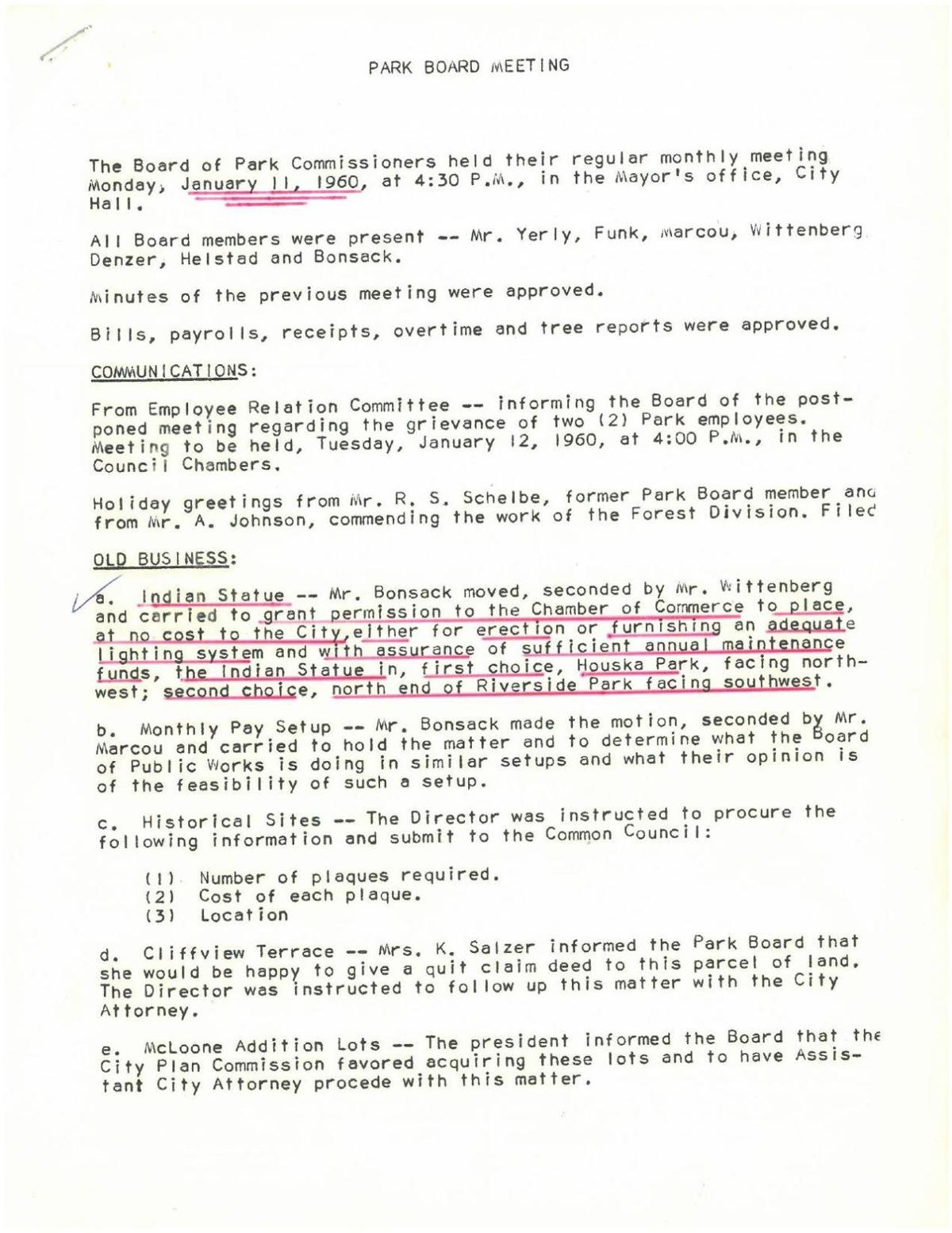 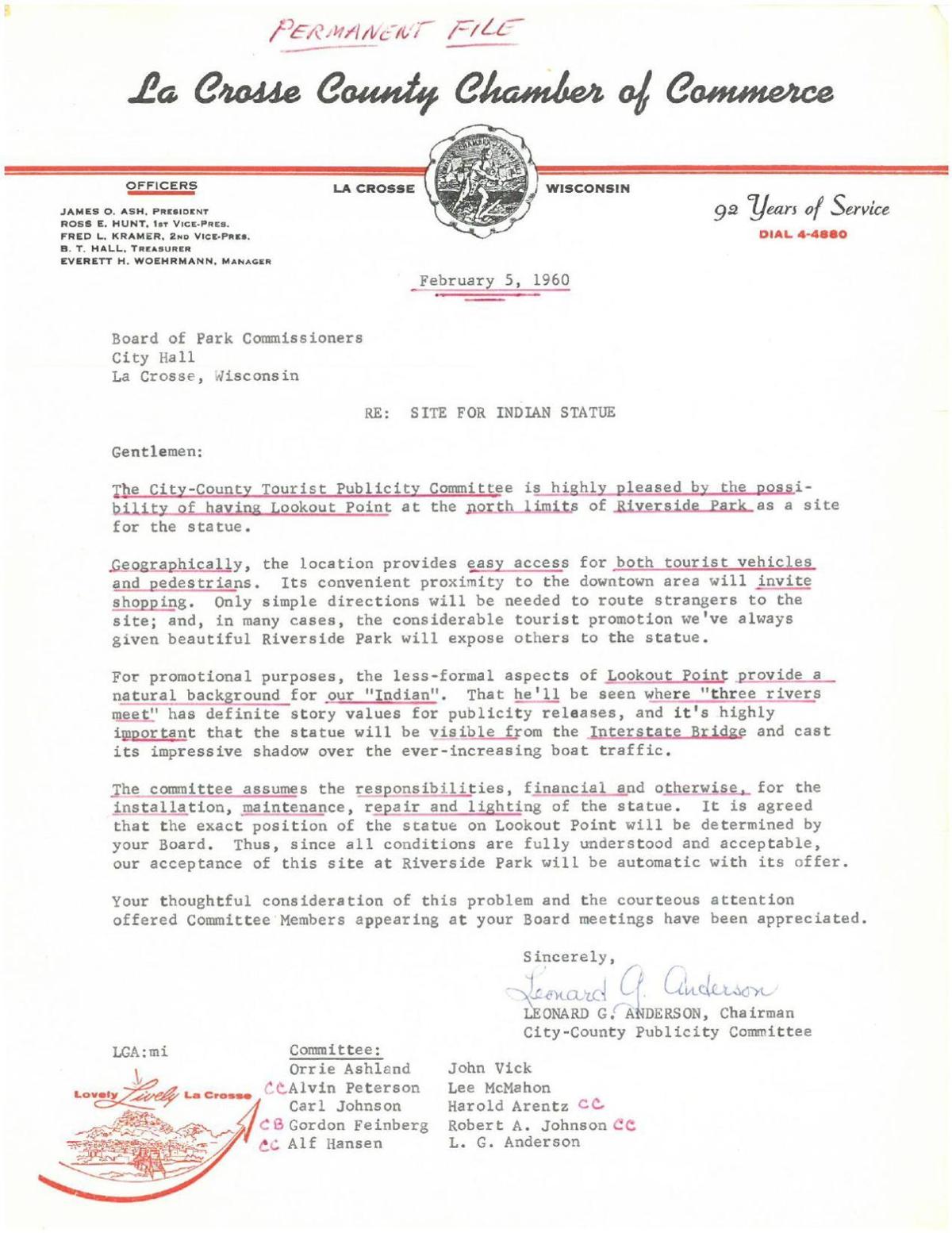 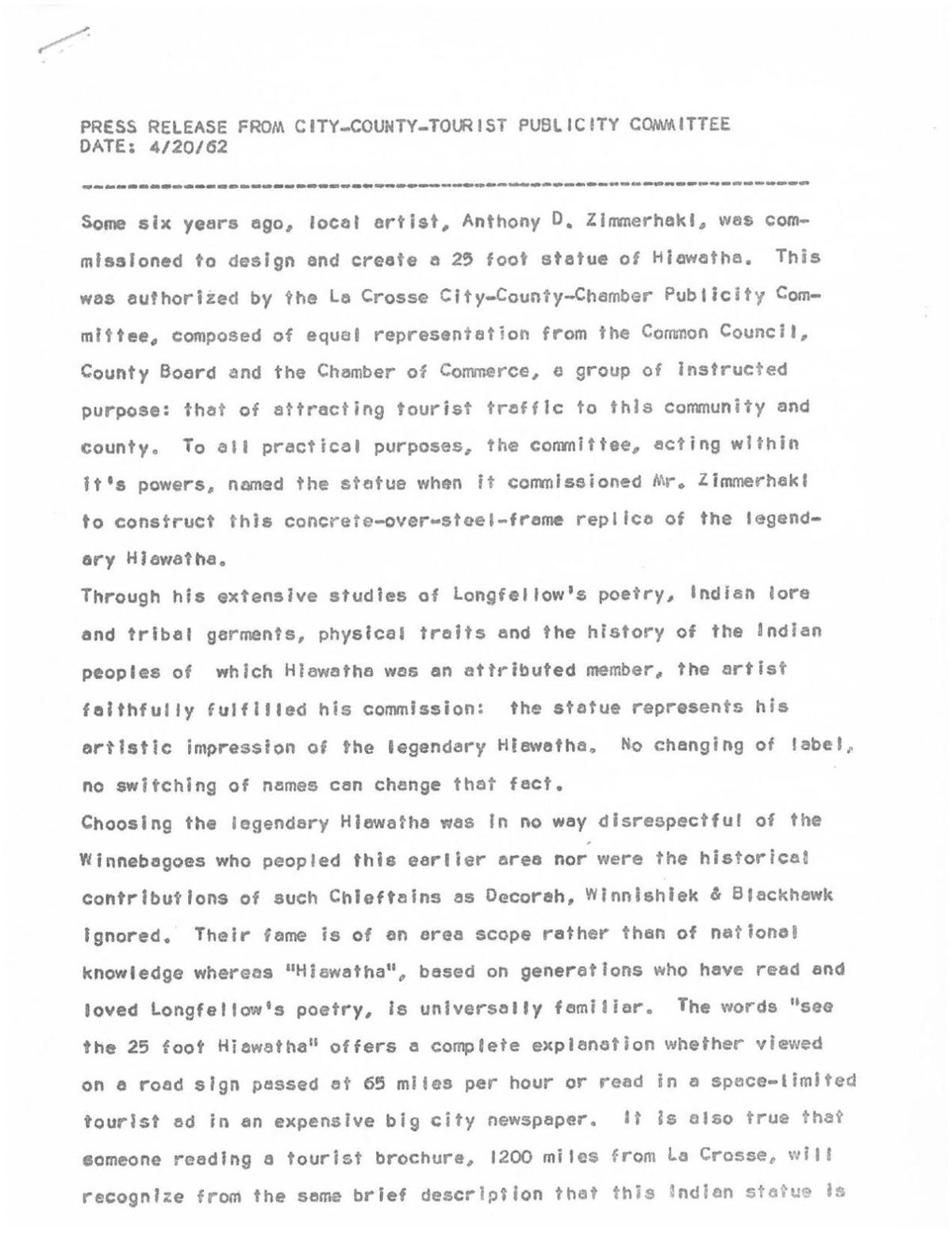 Deferring to the parks board 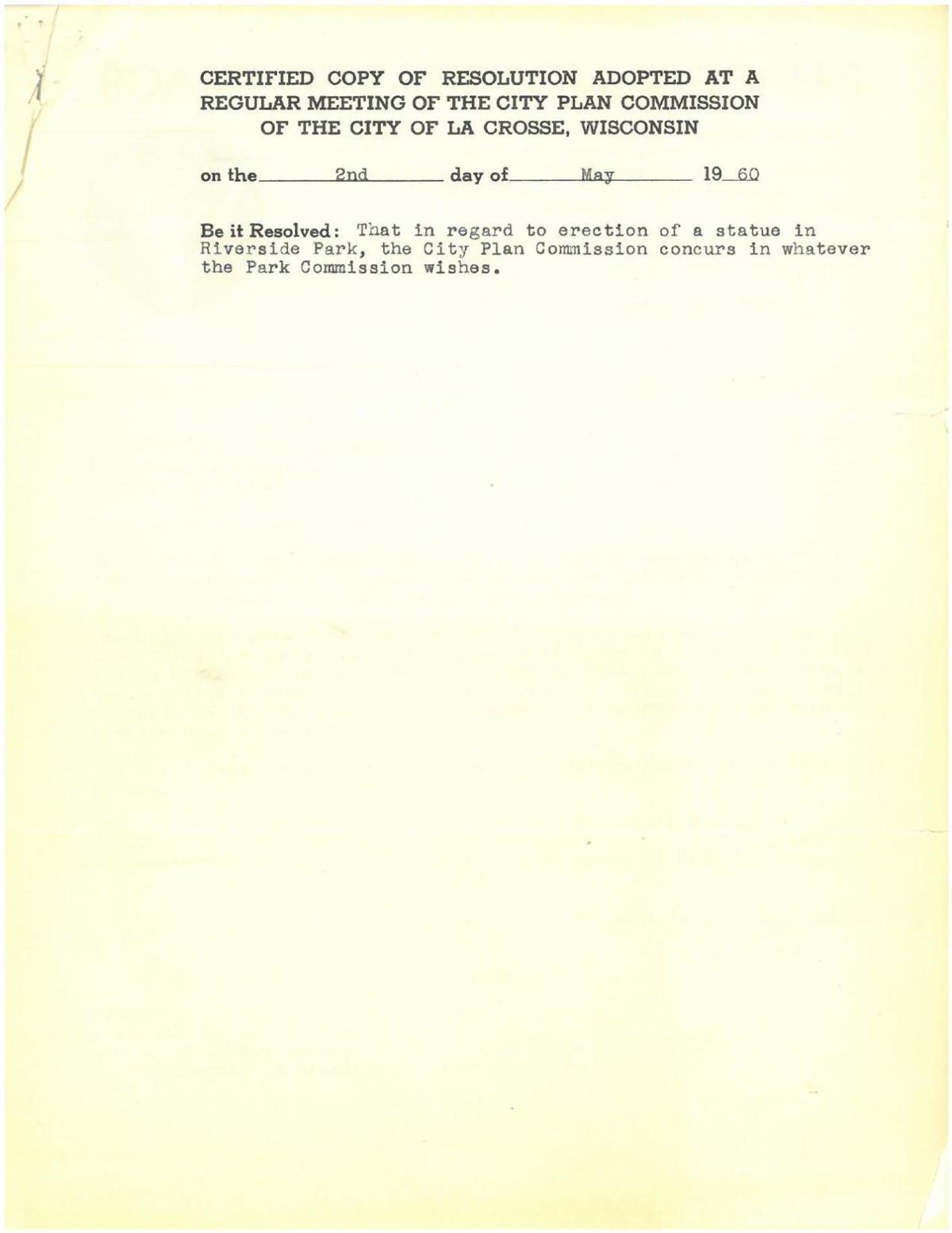 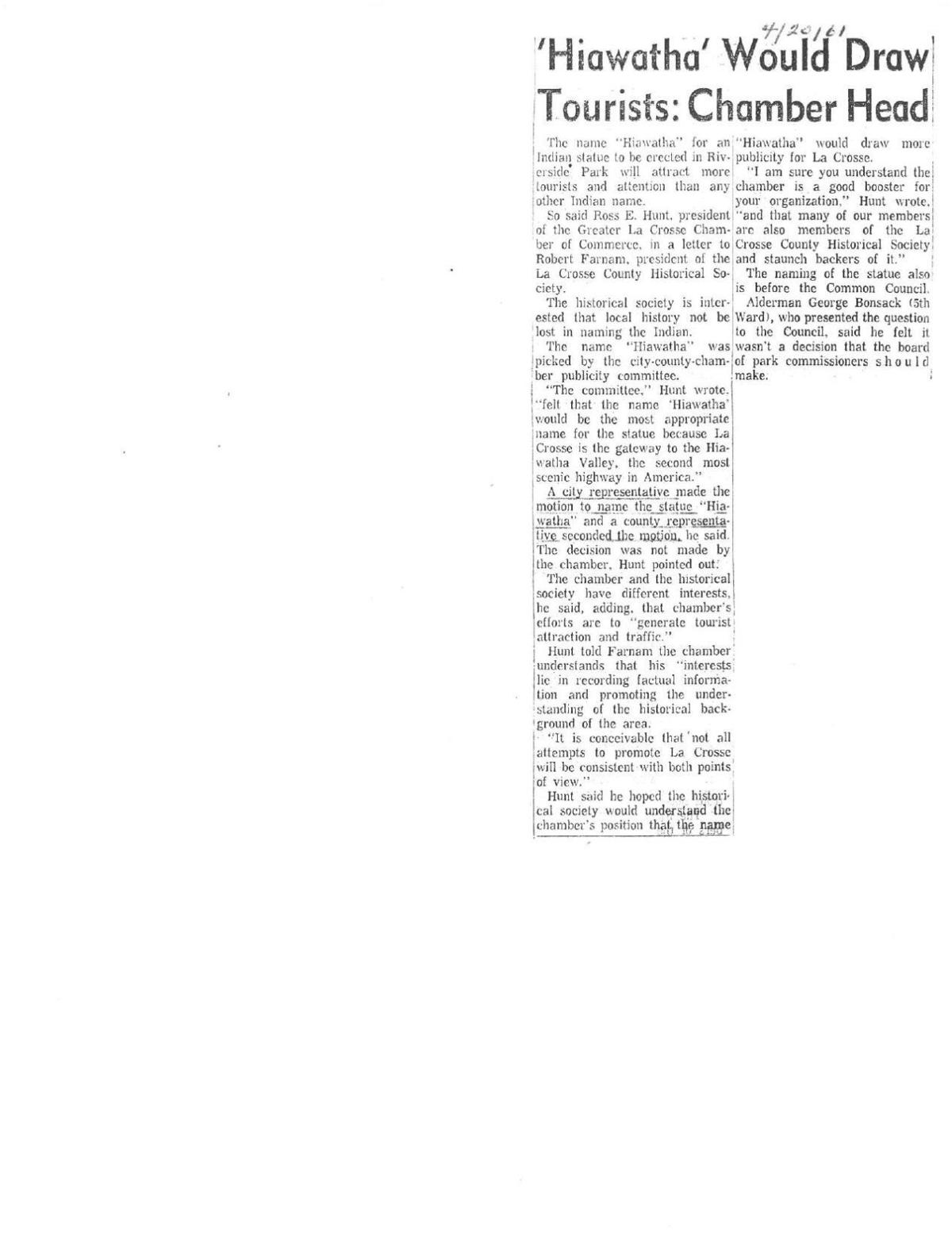 Parks board declines to name statue 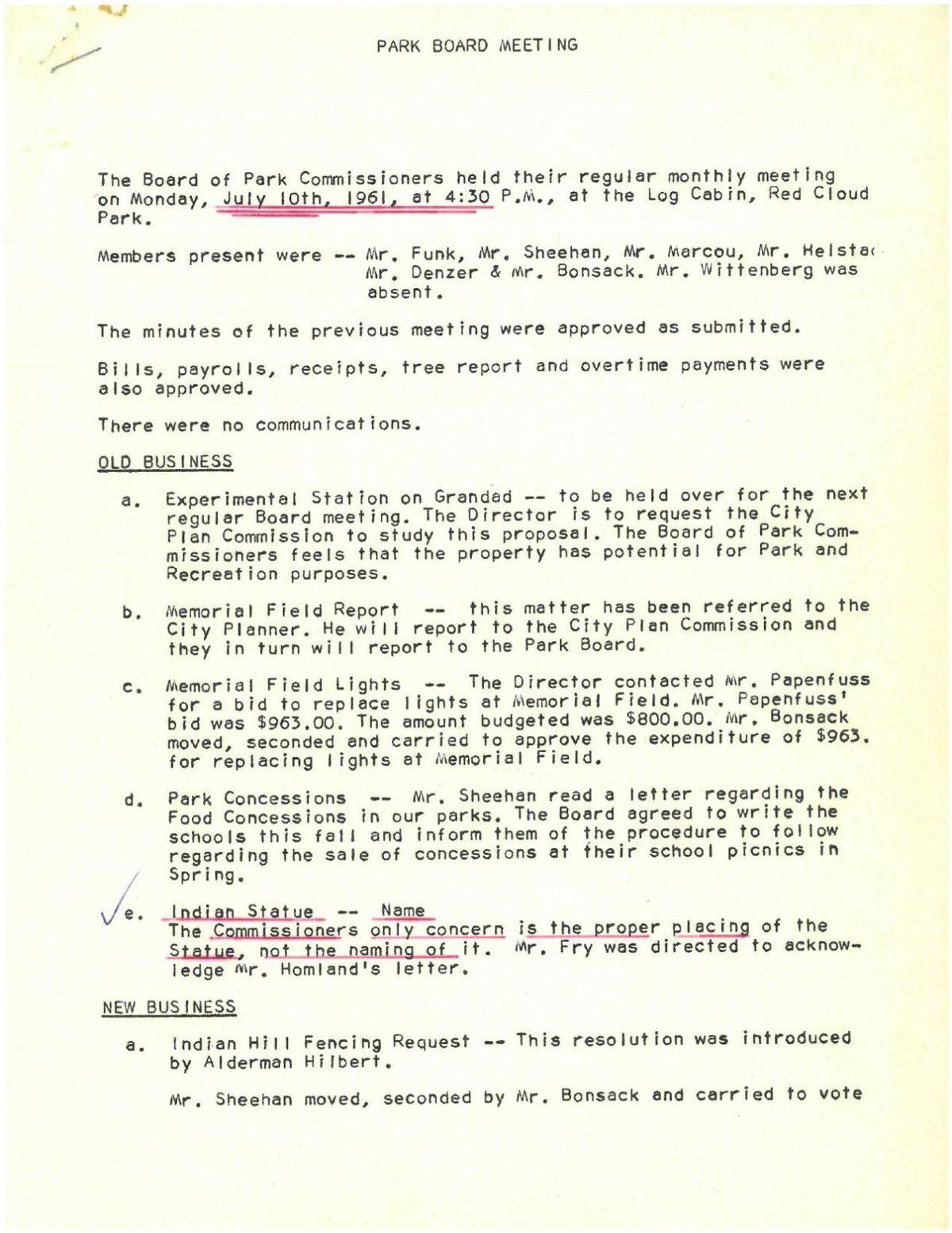 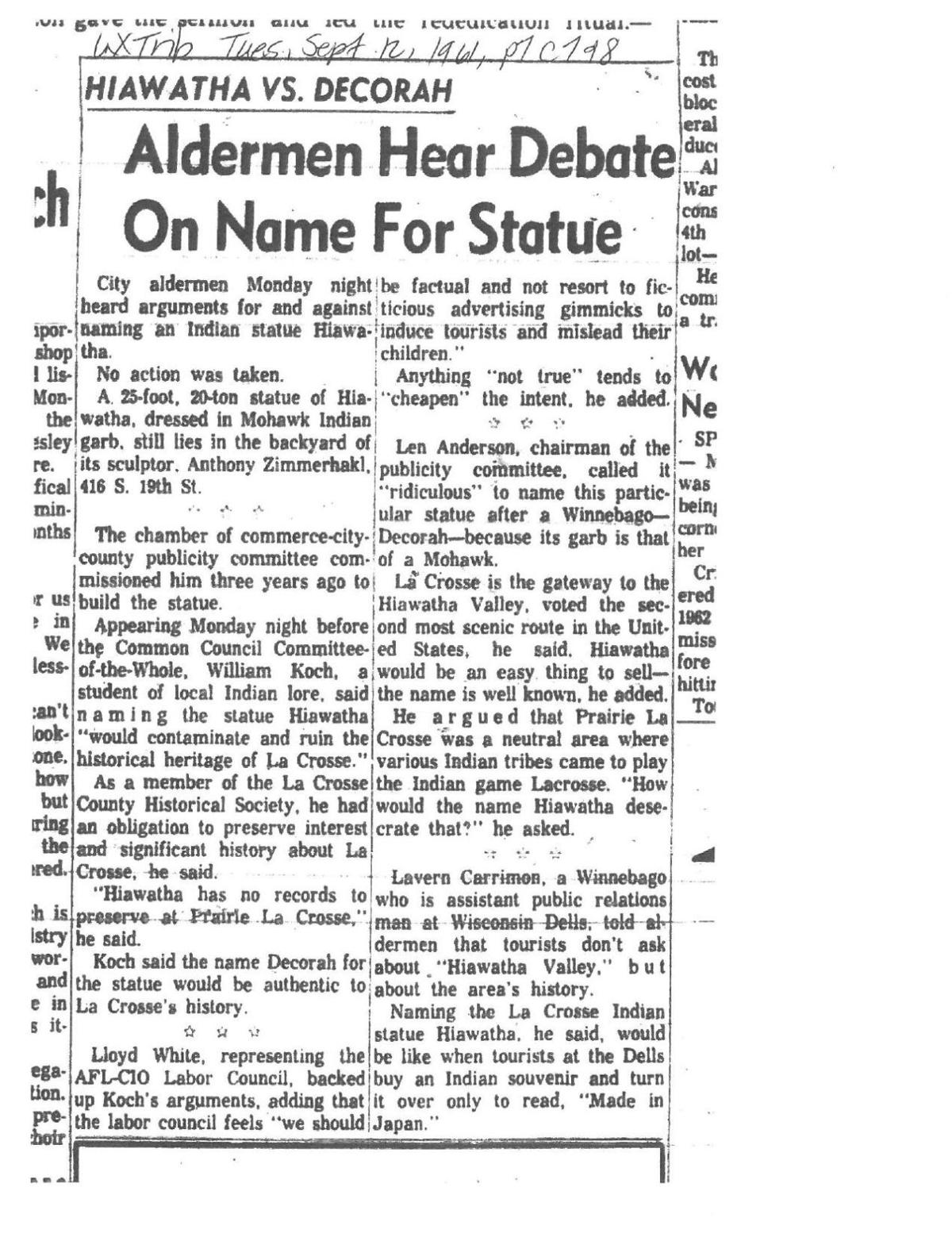 The Ho-Chunk Nation, formerly known as the Winnebago, rejected that name since this article was written. 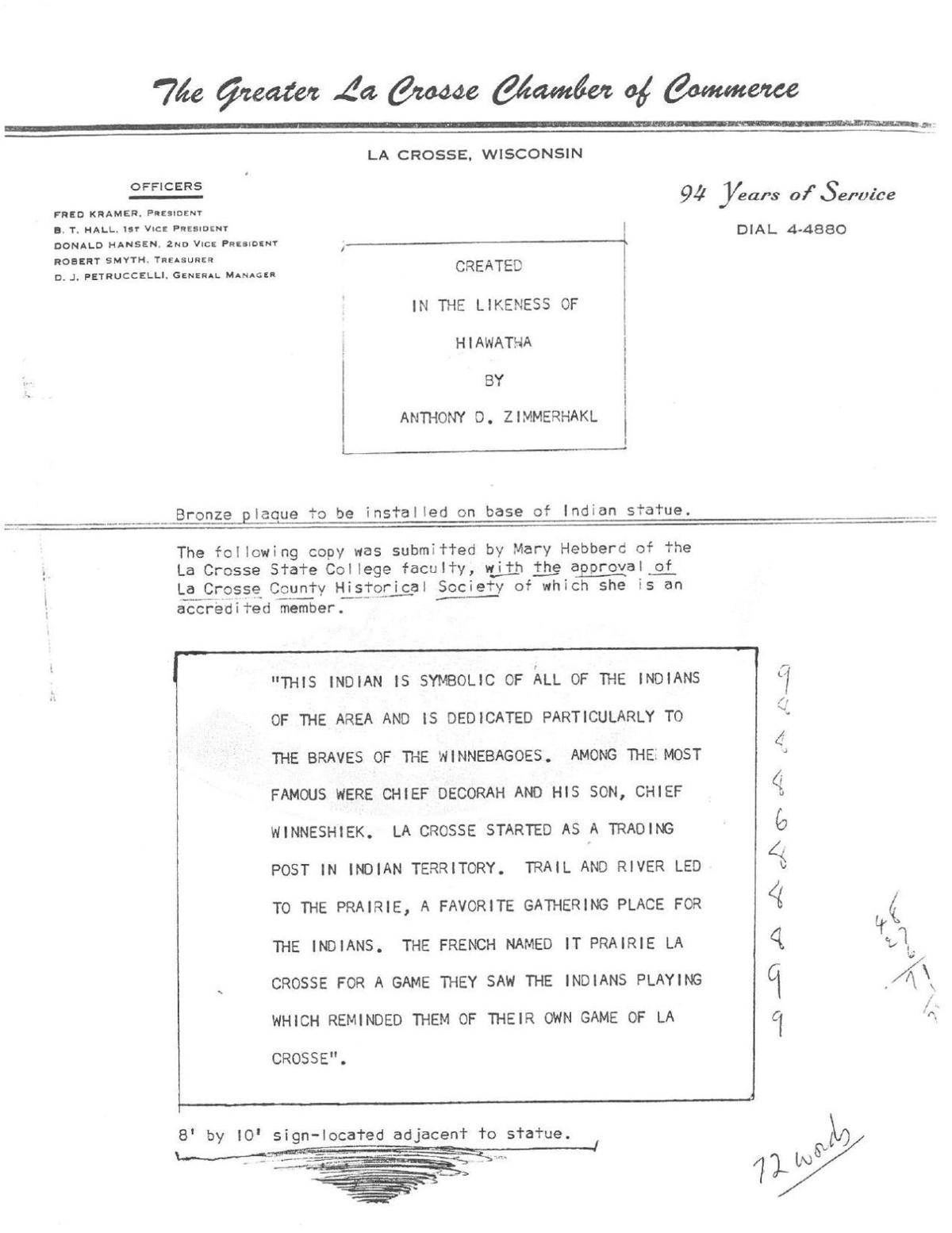 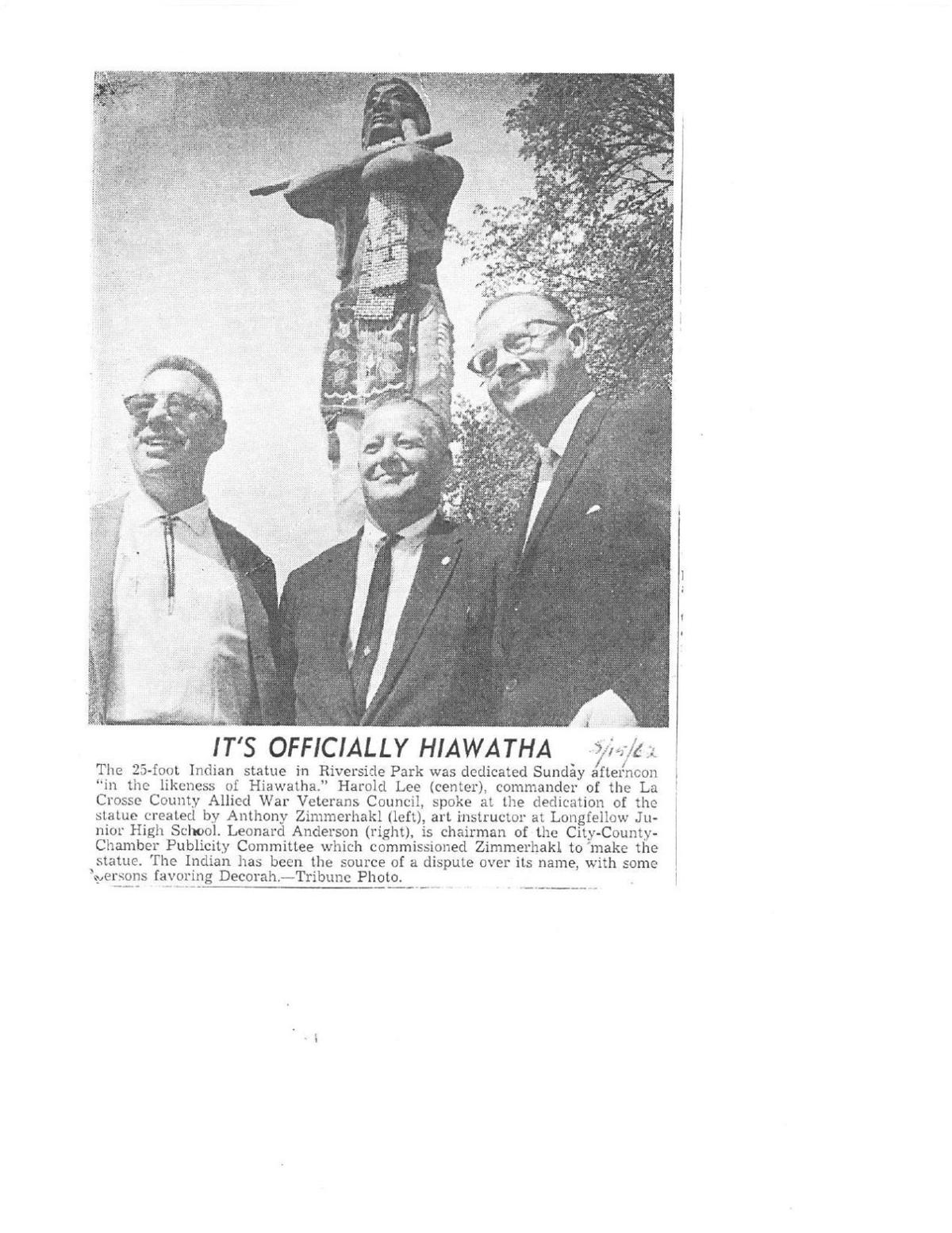 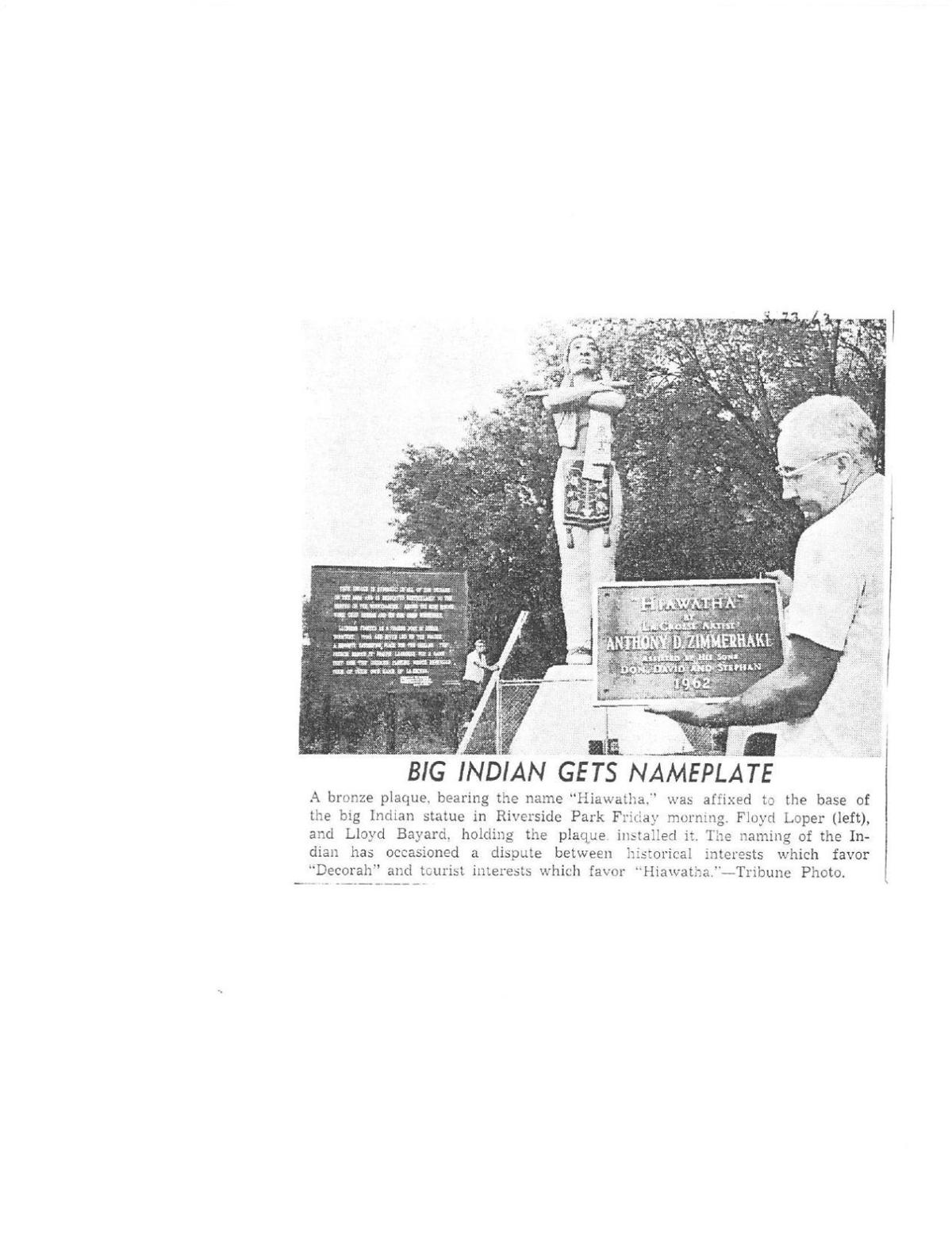 In need of repairs 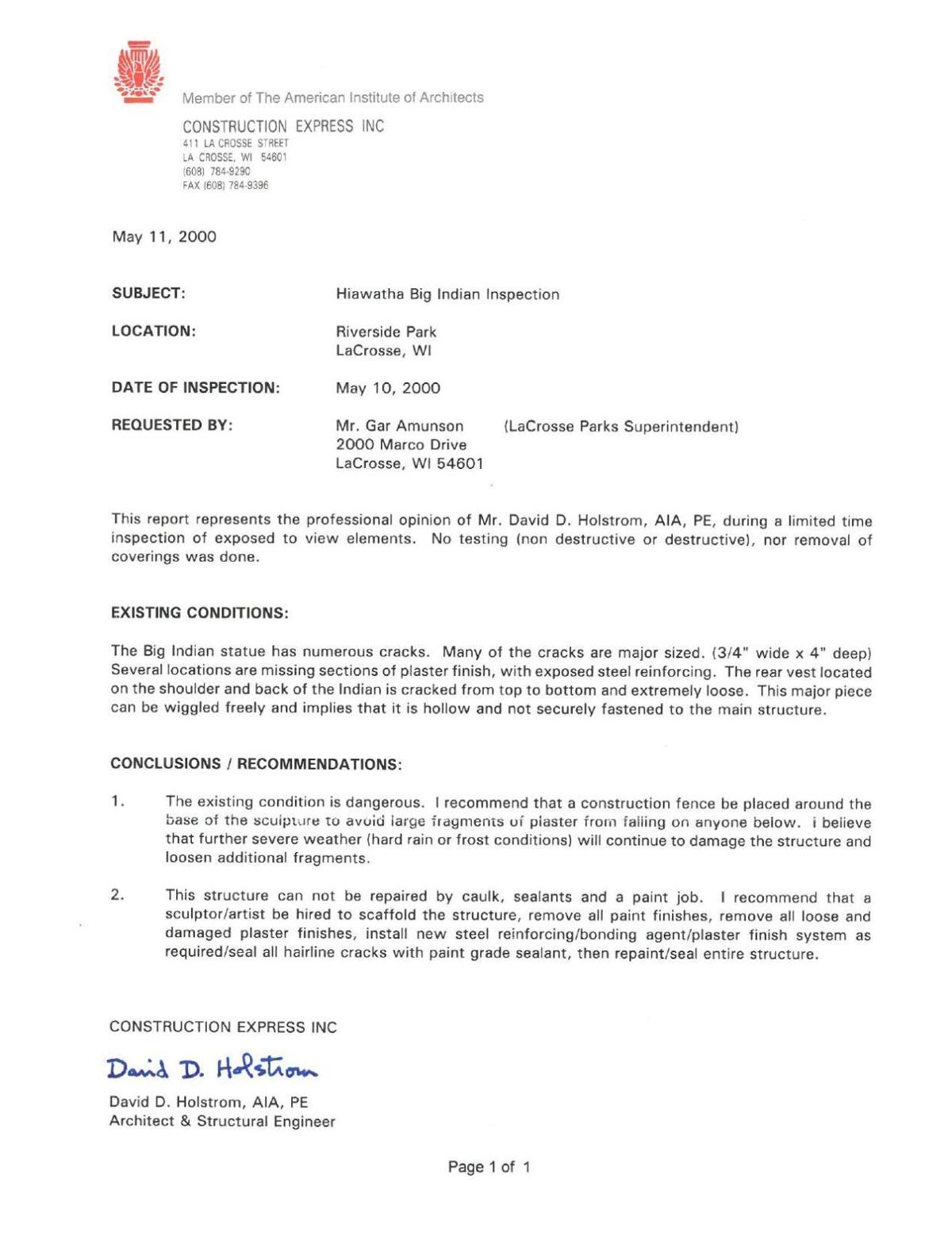 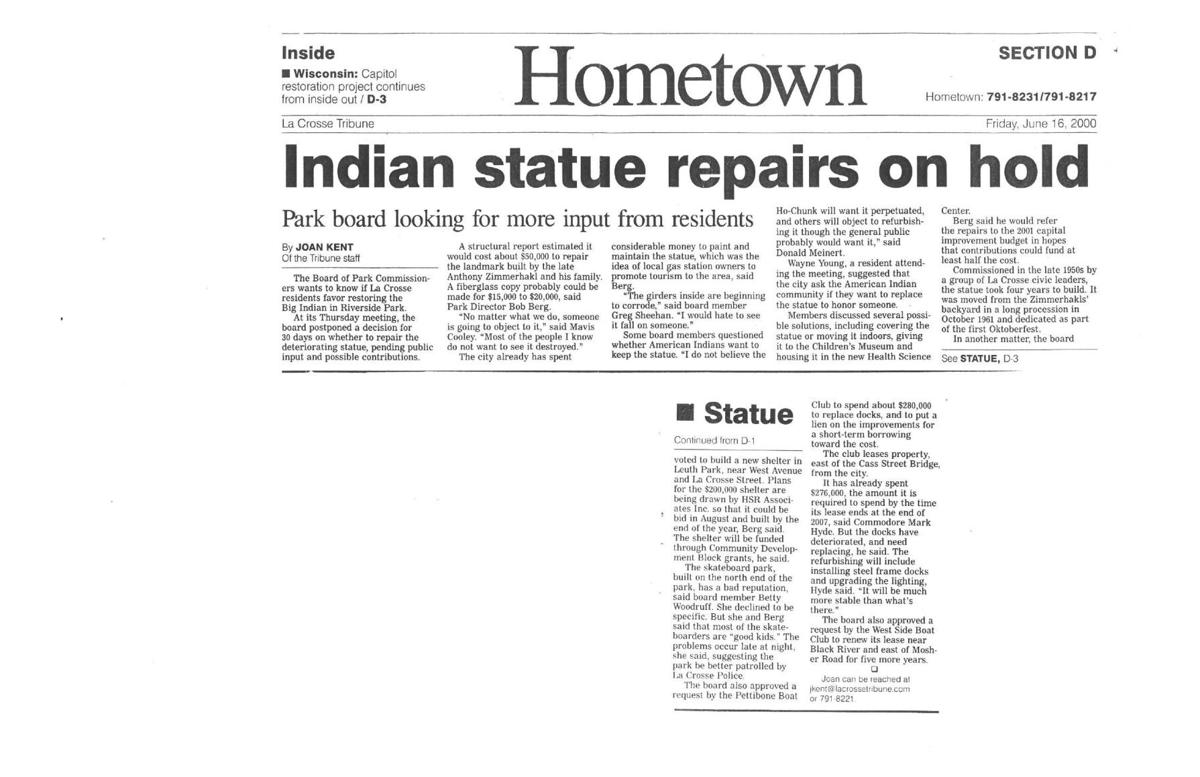 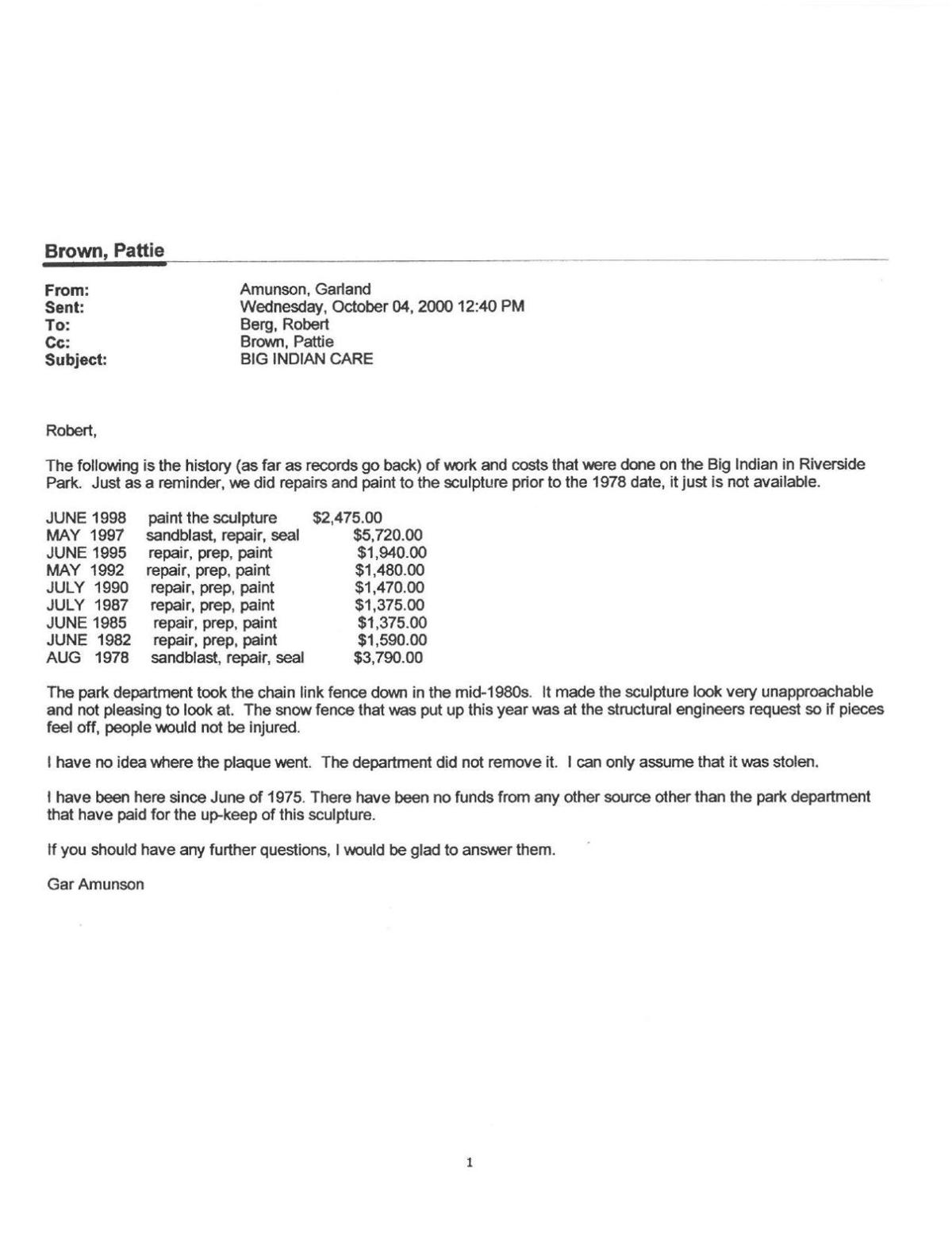 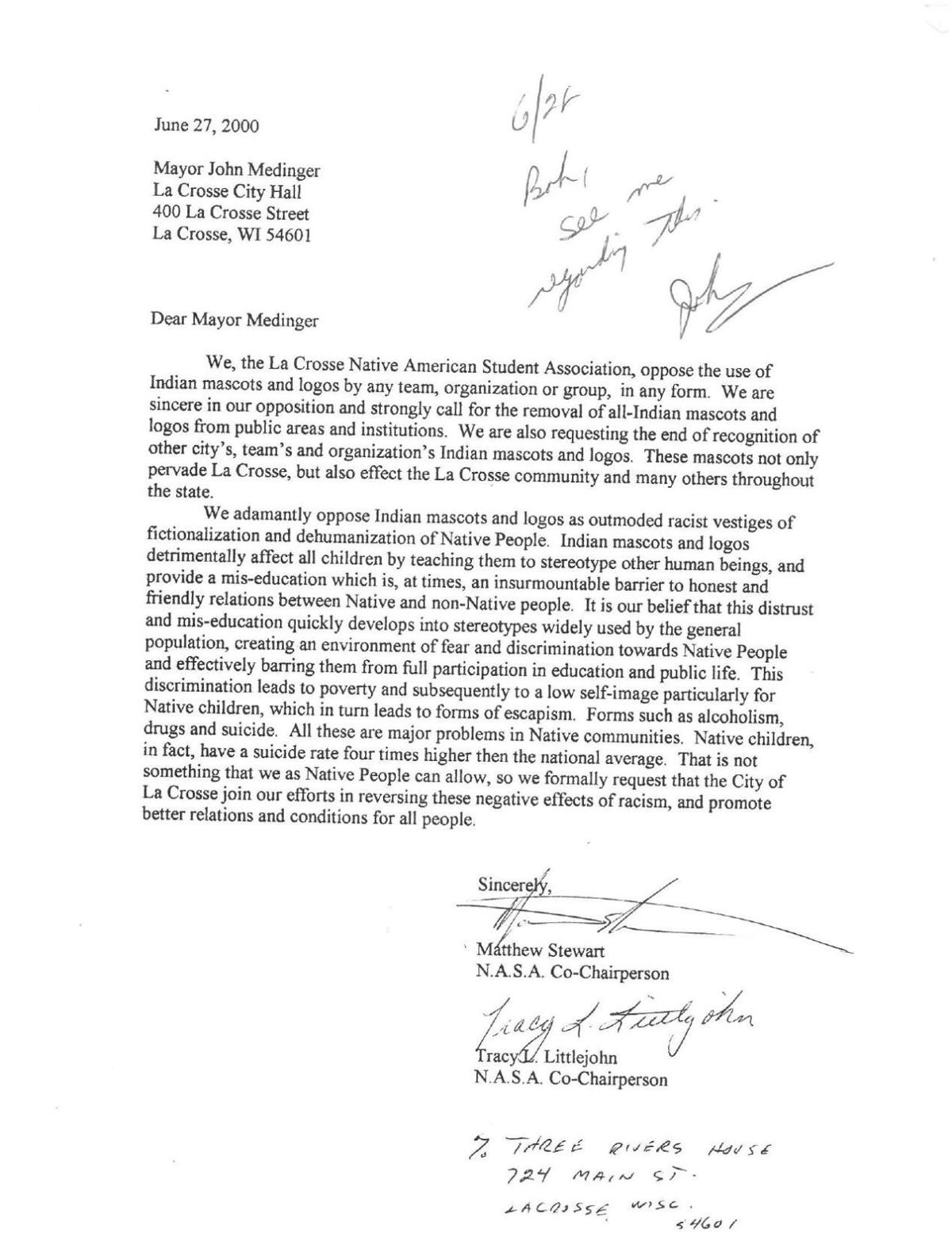 Artists' family speak out in support of statue 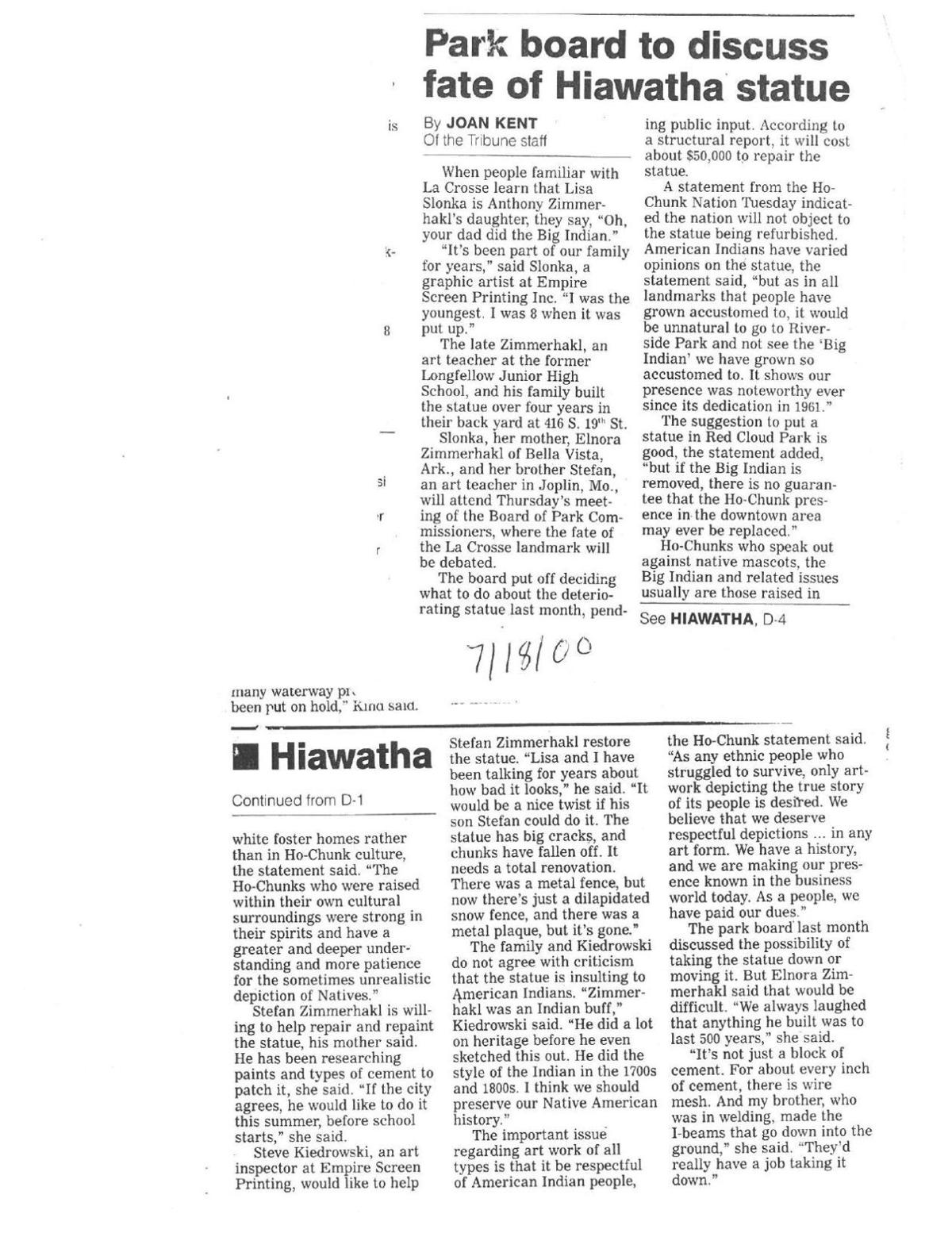 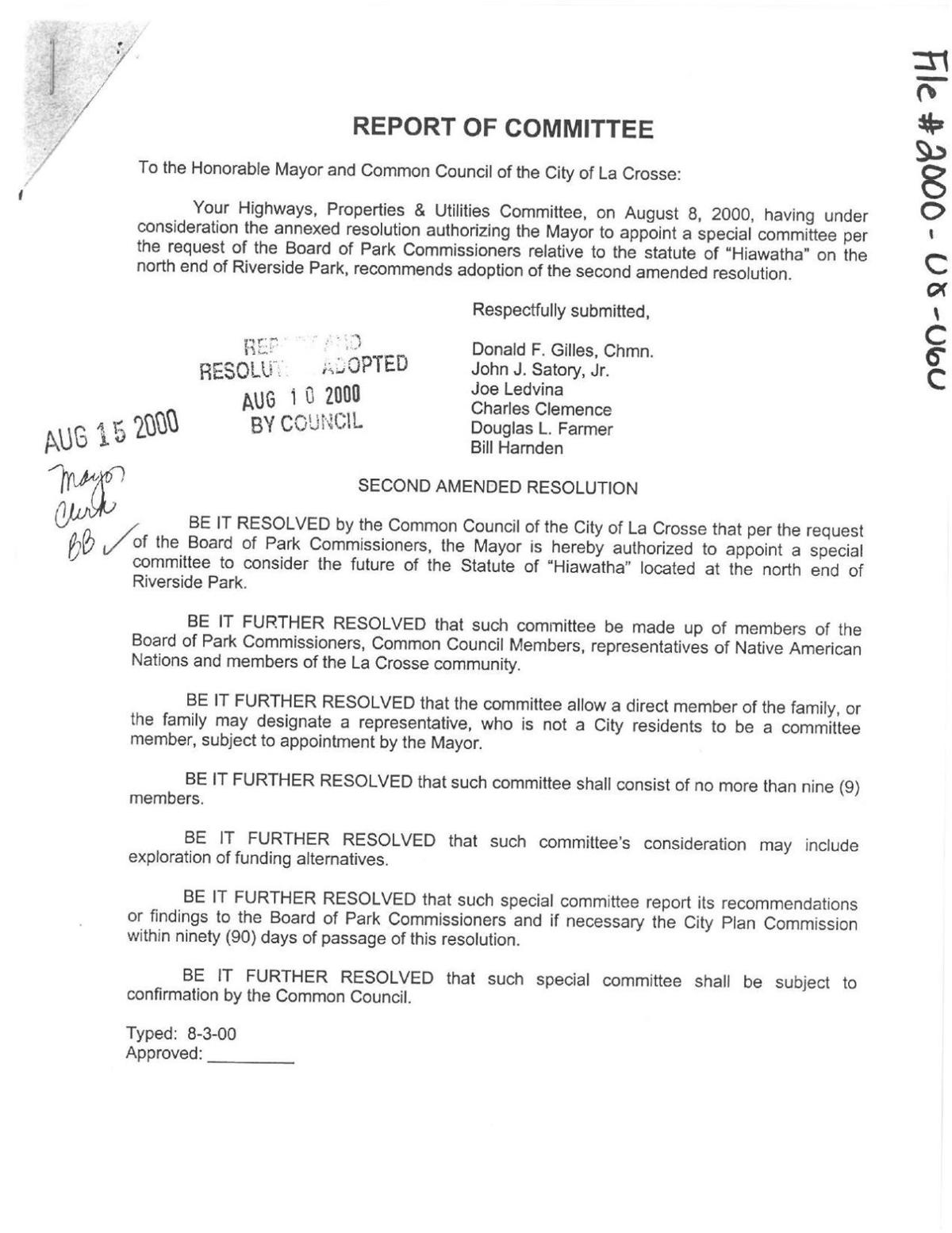 'A Compromising of Neighbors' 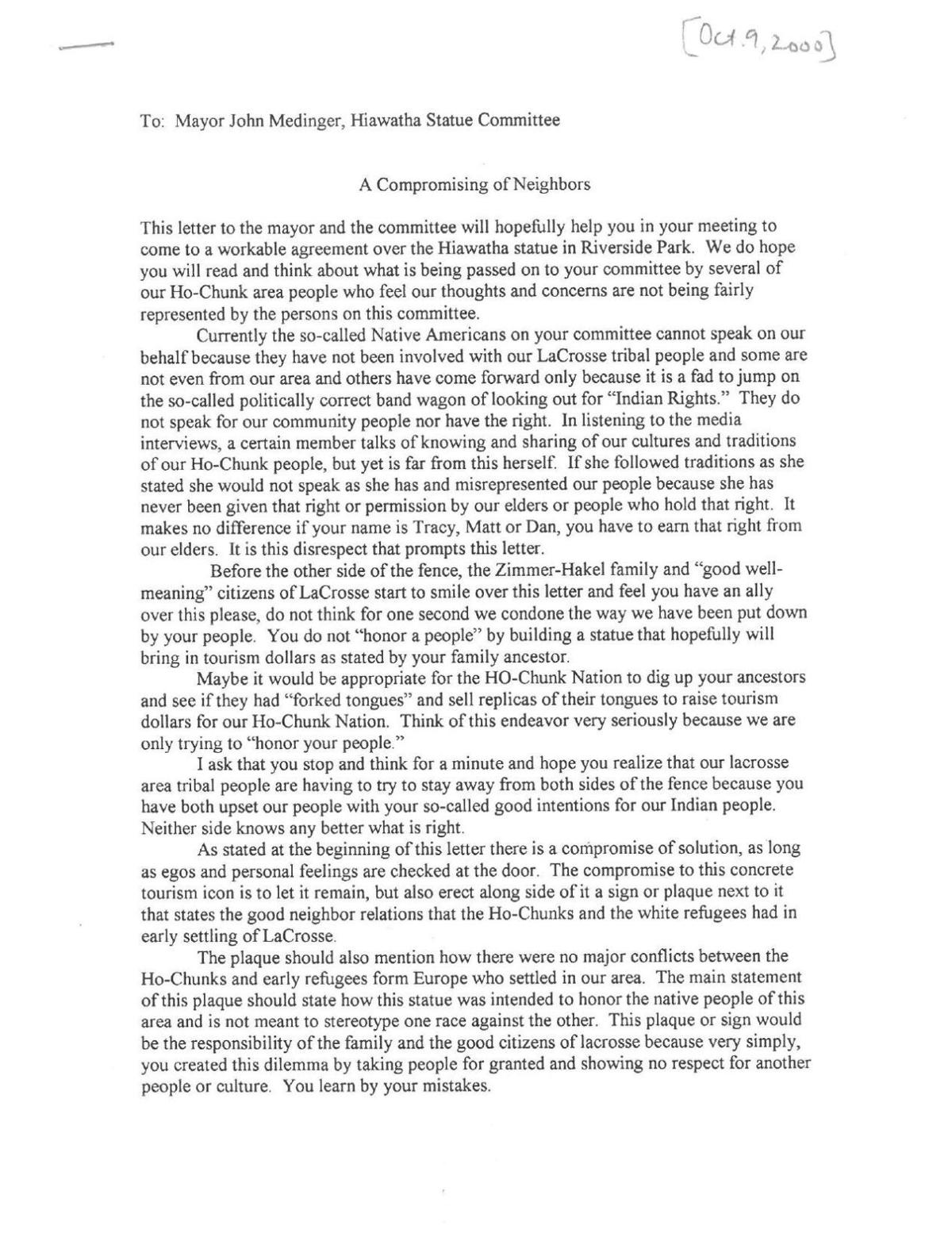 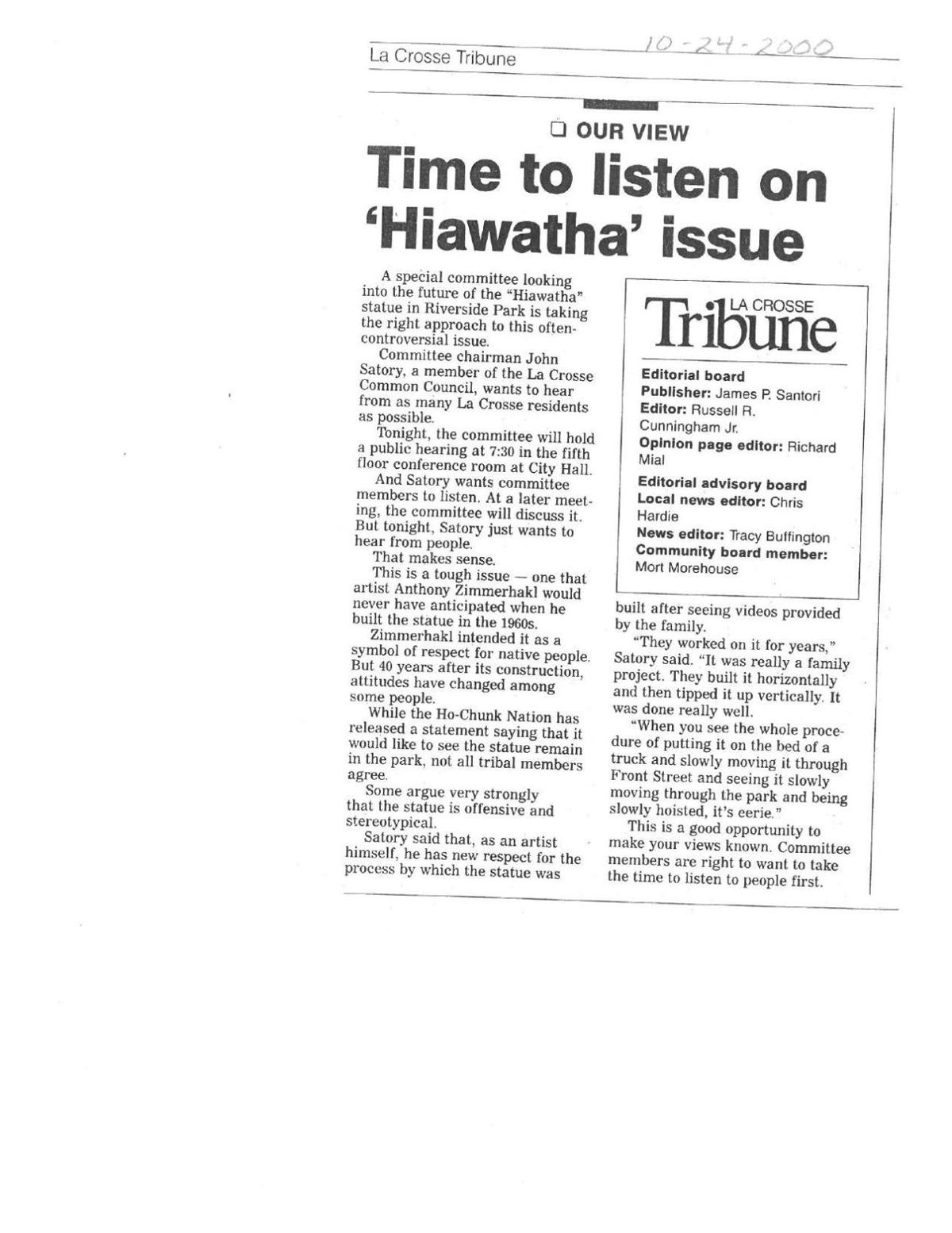 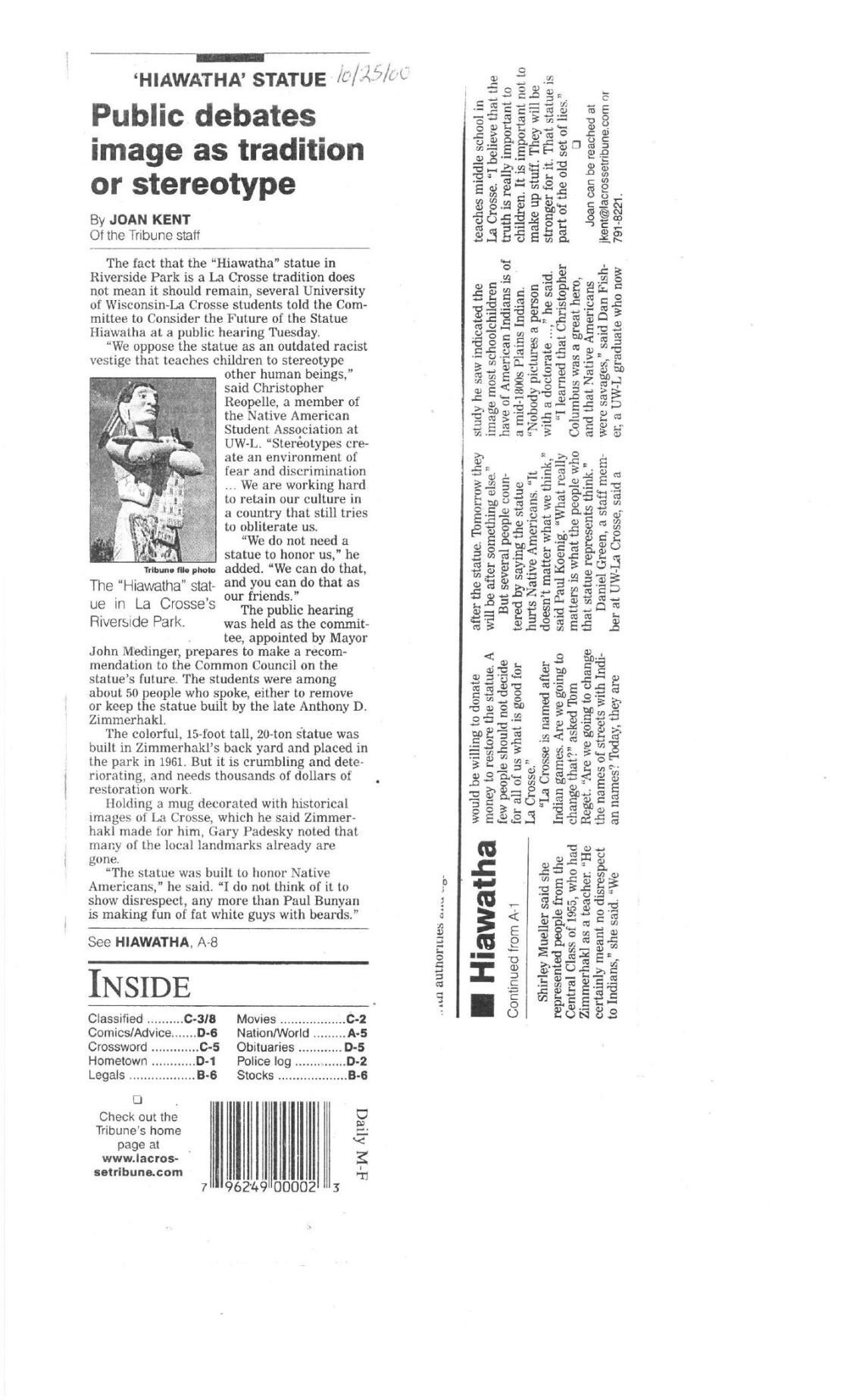 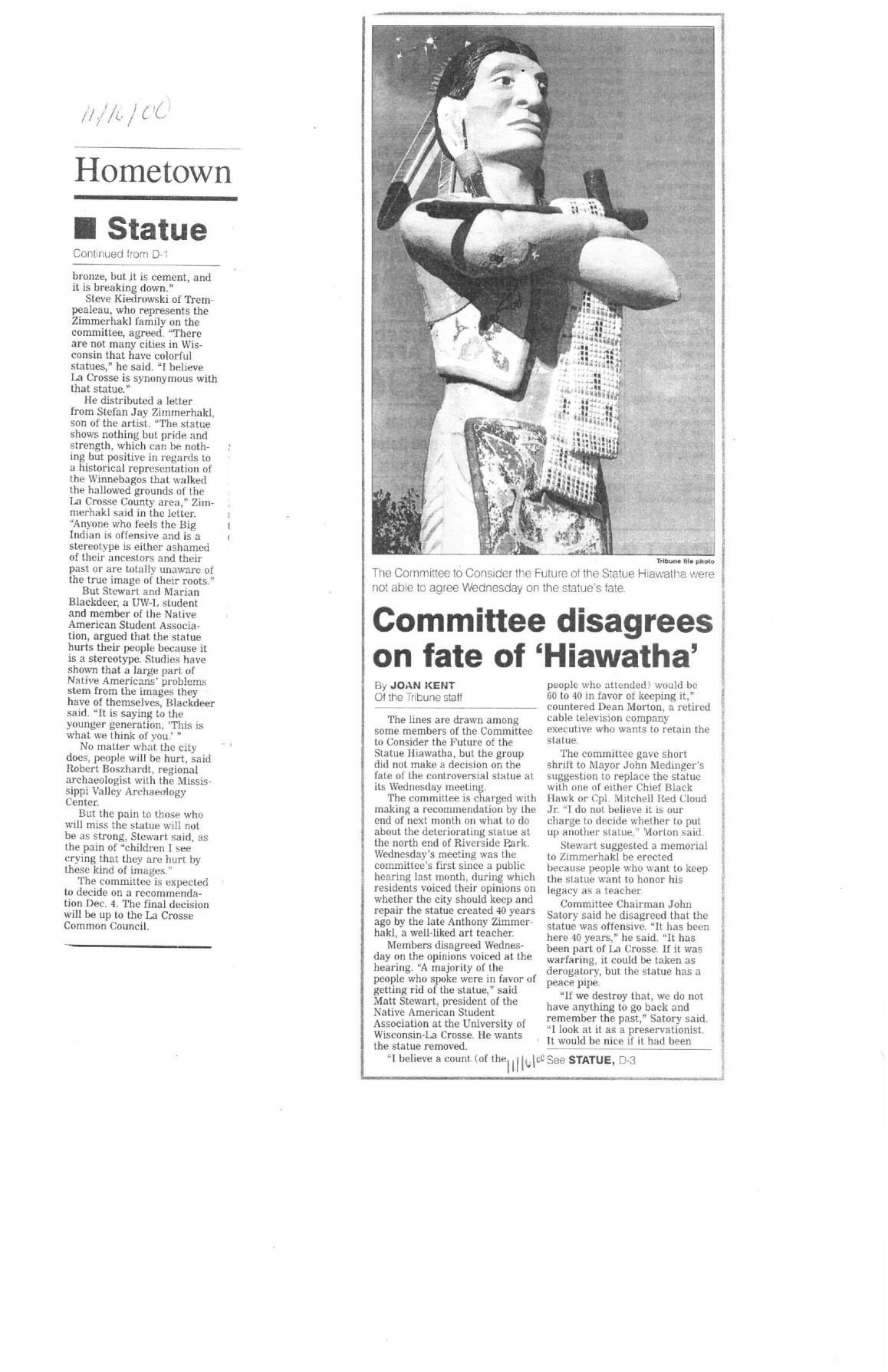 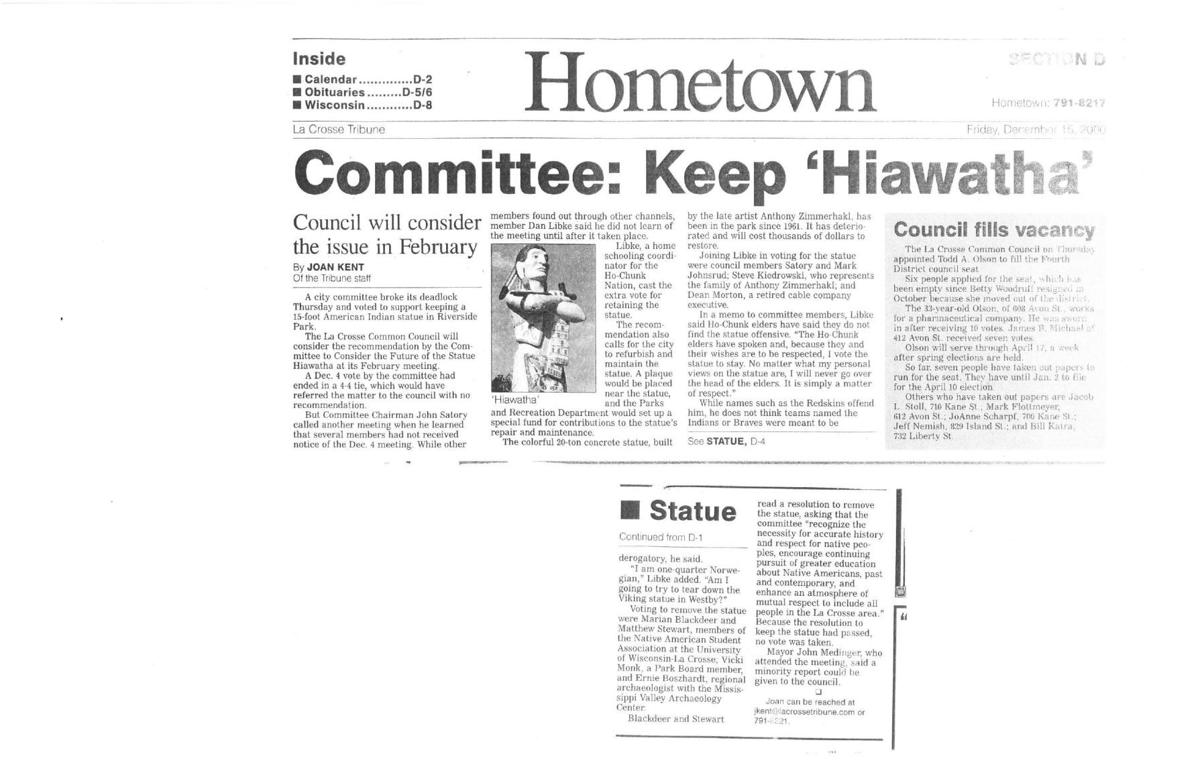 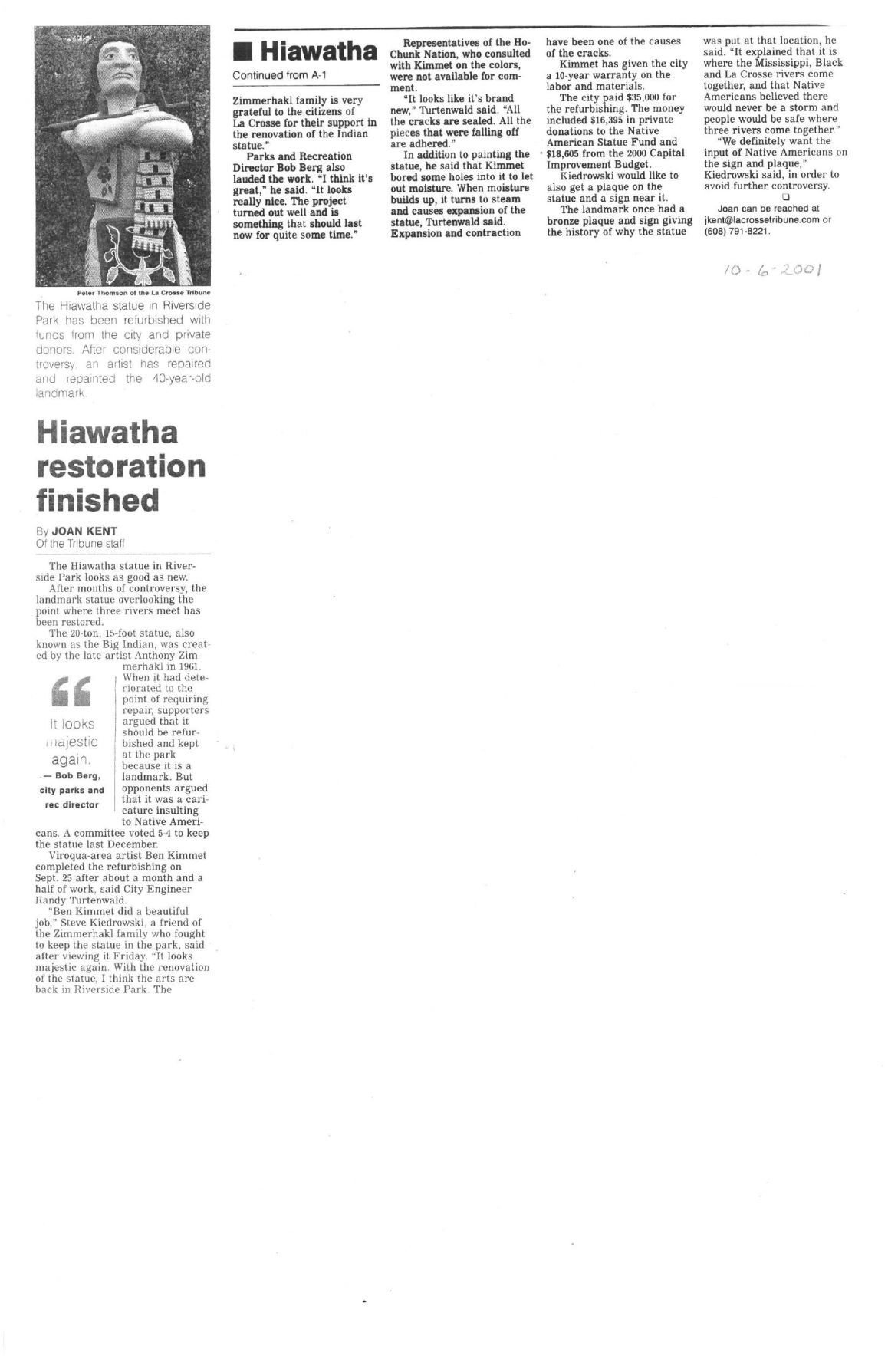 Texas hero honored after tending to injured in massive pileup

Texas hero honored after tending to injured in massive pileup

A photo from the La Crosse Public Library Archives show three local officials in front of the Hiawatha statue at its dedication in 1961.

Terry Burt: If we must replace Hiawatha, here are three worthy local heroes to choose from

There will be large moccasins to fill when the Big Indian statue in Riverside Park gets carted off to its likely next home, a not-so-happy hun…