Endangered buildings: An iconic row of American Foursquares
4 comments
Share this
{{featured_button_text}}
1 of 6 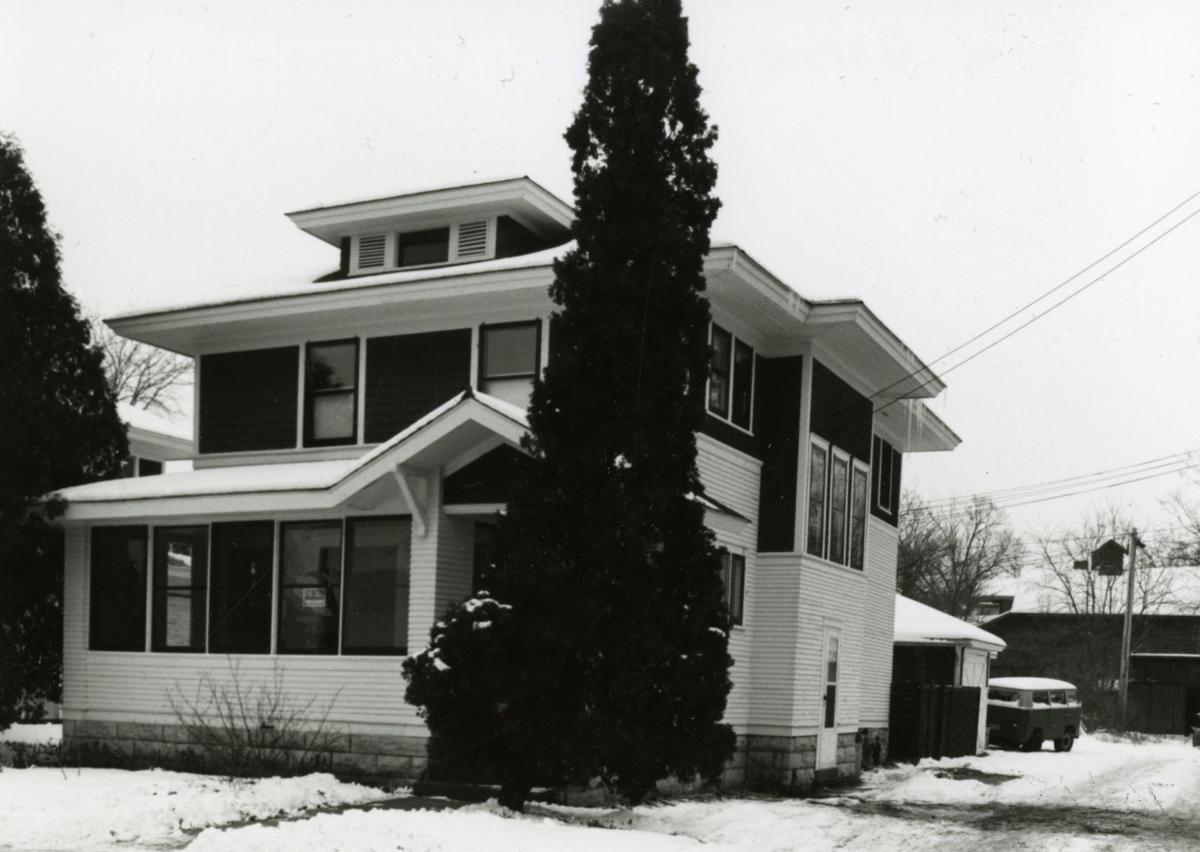 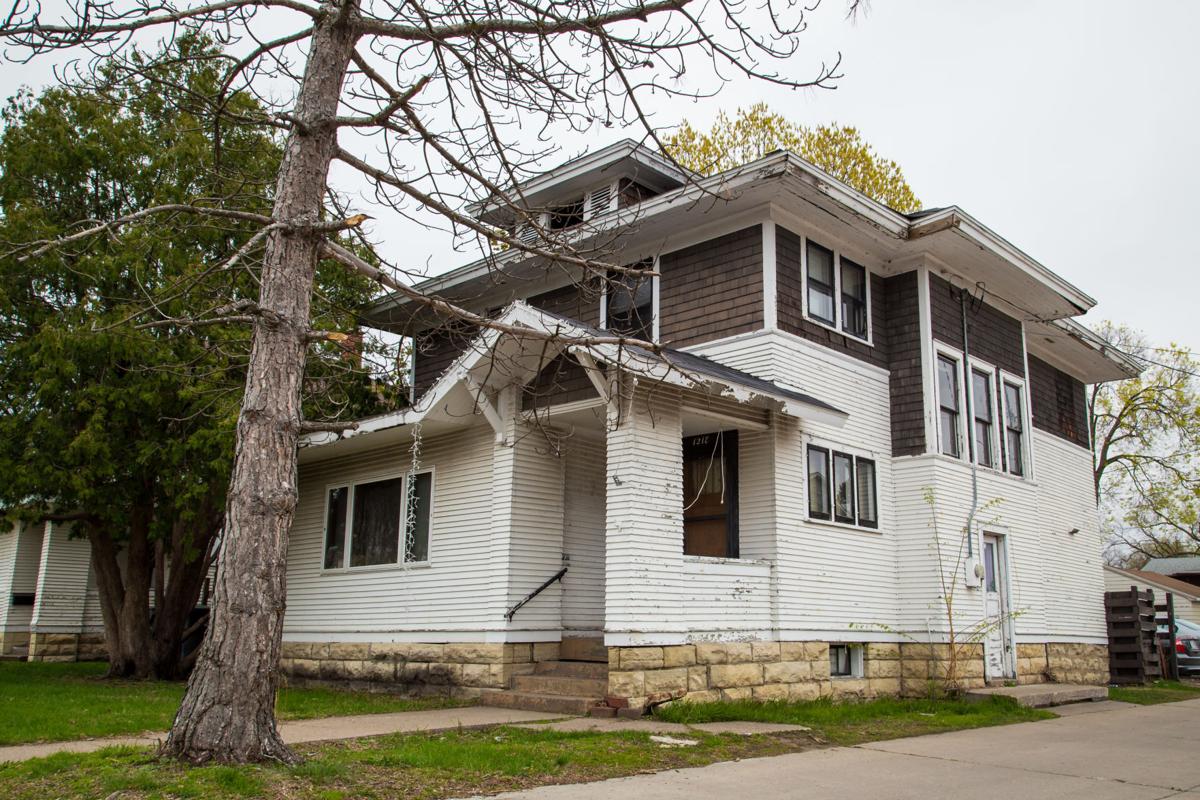 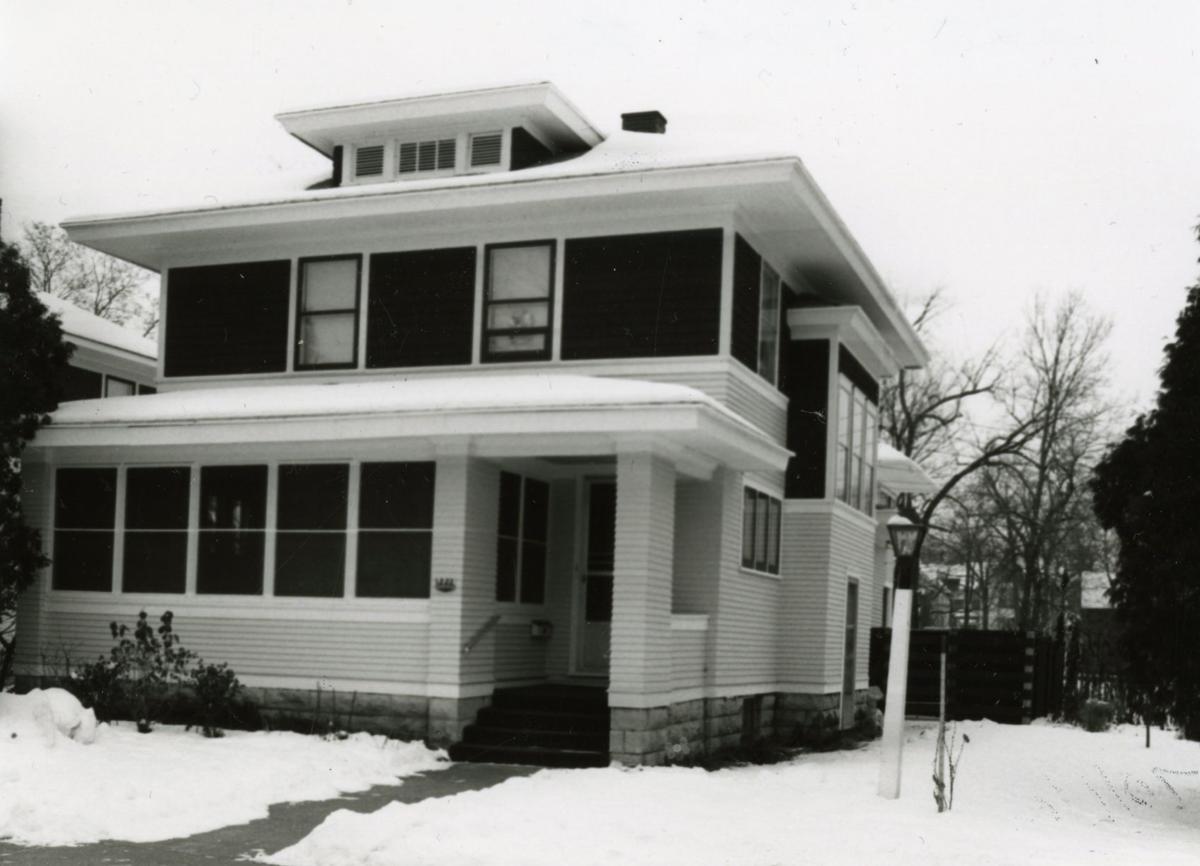 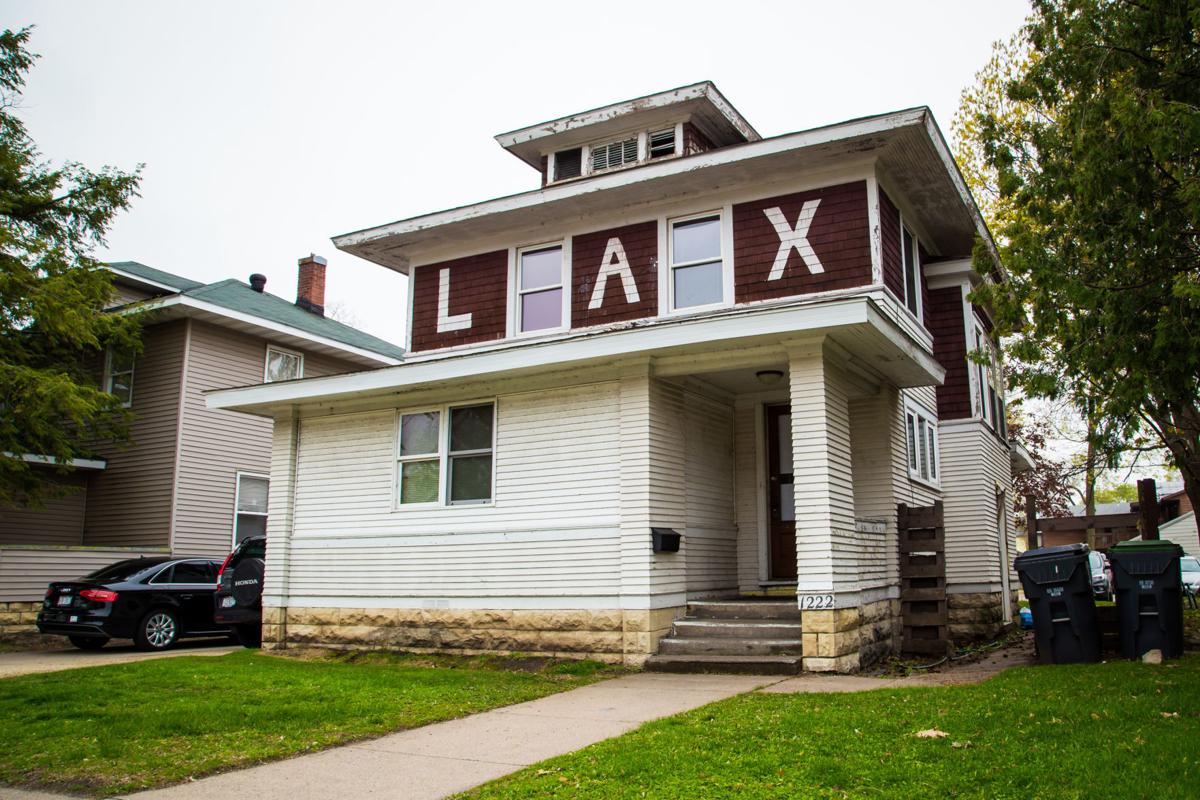 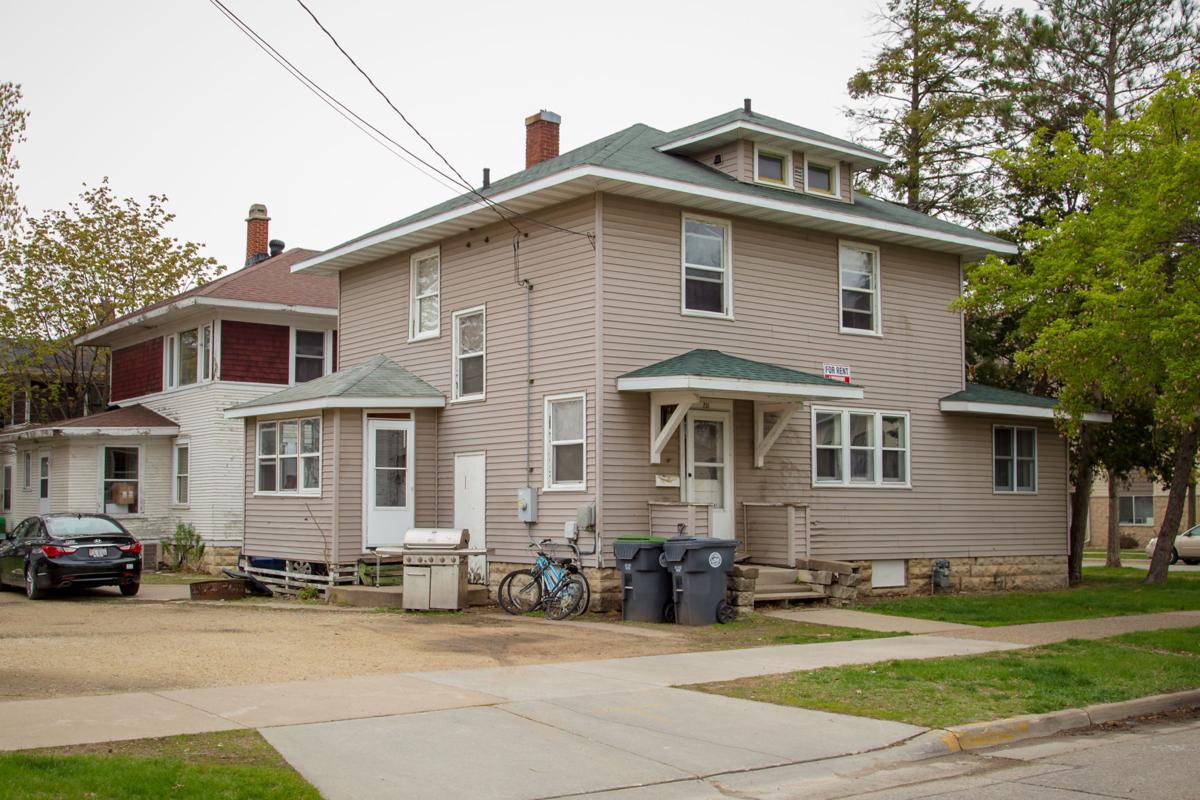 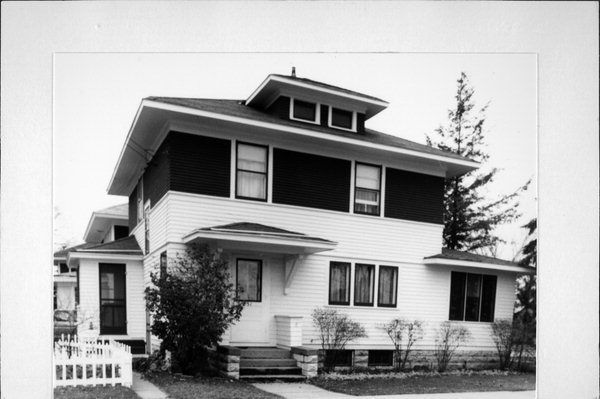 Laura Godden and Evelyn Gaunt For the Tribune

This new annual initiative intends to raise awareness and encourage the preservation of structures potentially at risk of irreparable damage or demolition due to neglect, natural disaster or redevelopment.

The seventh, eighth and ninth properties on this year’s list of 10 are a row of three American Foursquares with Prairie-style detailing on the 1200 block of Vine Street.

These structures, built between 1917 and 1919, are some of the last remaining original residences in a neighborhood now dominated by large apartment complexes.

In the early 20th century, Foursquares were appealing because of how well they maximized the space of small city lots. They were also some of the first affordable, middle-class homes to include modern amenities once limited to elites. Evidence of their popularity is seen through the numerous kit models offered by suppliers such as Sears, Montgomery Ward, Aladdin, and the like.

These three homes, however, appear to be custom-built, as no matching plans could be found in the prevailing mail-order catalogs of the time. La Crosse has a finite number of Foursquares, so preserving this cluster of fine examples would benefit the community.

The property in the middle of the grouping – 1222 Vine St. – first belonged to Edward and Edna Weimar. They took up residence here a little over three years after their wedding. They were both children of long-time La Crosse residents descended from German immigrants. Edward was particularly well-known for being active in local music ensembles. Before living in this home, the couple had resided with their parents.

Though it isn’t readily apparent who built these three Foursquares, Edna’s father may have played a role given his city directory listing: “Rochelt, Frank J., carpenter, contractor and builder. Contracts taken for all kinds of buildings and executed under his personal supervision by the best of skilled labor.”

Edward had just started a job at the National Bank of La Crosse shortly before moving into this house around March 1918. Prior to that, he was employed as a stenographer, bookkeeper and clerk for the Chicago, Burlington & Quincy Railroad. Previous to marriage, Edna had been a domestic servant for lumber-baron Frank Hixon and lived in his 1431 King St. mansion for several years.

After nine short months in the home, Edward became tragically ill and died on Christmas Day at only age 28. He passed during the height of the 1918 pandemic, when many younger individuals were sadly stricken with Spanish-Flu-induced pneumonia. Edna, herself, was so sick that she wasn’t even told of her husband’s death right away.

In May 1919, Edna’s parents, Frank and Ida Rochelt, bought the house next door, presumably to help support their recently widowed daughter. At the time, they would have been in their late-50s.

The following year, Edna got remarried to Edward’s younger brother, Arthur Weimar. Arthur had been working for Edna’s father as a carpenter since her 1914 marriage to Edward. After the sudden death of his father-in-law in 1928, Arthur gained employment with the U.S. Postal Service and worked as a mail carrier for over 24 years before retiring around 1961.

The 1922 and 1924 city directories both list two sets of students staying with Edna and Arthur, whose home was only four blocks from La Crosse State Normal School — known today as UW-La Crosse. At that time, the campus consisted of merely two buildings. Prior to construction of the first official dormitory in 1951, students were generally required to either live with family or have the school administration place them in pre-approved host residences. In addition to paying rent, homeowners also sometimes expected students to help with cleaning, cooking, child care, and other chores.

The 1922 university catalog boasts: “arrangements are made for the accommodation of students in some of the best homes in the vicinity of the Normal School. This is a great advantage to the students, and is a source of satisfaction to their parents as well.”

The Weimars still resided in the house when Edna passed away in 1969. Arthur moved to a smaller home on Coulee Drive the year after she died. He passed in 1975 at the age of 81.

The two other homes in this row of American-Foursquares only had short-term residents early on. The westernmost house in the group – 1218 Vine – was most likely the first of the three built. During its initial years, it was occupied by Emma and Arthur Maltman. They were in their late-20s, had recently moved from Illinois and then left La Crosse shortly thereafter. While living here, Arthur Maltman worked as a stock clerk at the La Crosse Tractor Co.

The home on the eastern side of the grouping – 231 13th N. (previously, 1226 Vine) – was most likely the last of the three built. Henry Putman, his wife Annette and 84-year-old mother-in-law Georgia Stiles moved into this house around 1919. The 53-year-old had just relocated from Minneapolis to be the general sales manager for the La Crosse Rubber Mills. Putman’s job must have paid well because he bought an even more impressive home, worth triple the value, just three blocks to the south of this one a few years later.

Fortunately, the Weimar and Maltman houses retain several of their essential architectural elements, such as original wooden siding, siding shingles, front doors, soffits and leaded-glass windows. The Maltman house especially stands out because it features a distinctive bracketed gable over its front entrance, and the Weimar house has a noteworthy two-story stairwell bay that gracefully terminates just before its roofline.

Hallmarks of the Putman house include a less common layout and bracketed entrance hood. Regrettably, it has experienced more unfortunate renovation compared to the other two, and many of its architectural features have been lost, altered or covered up, such as its wood siding, front ribbon windows and side porch. It would greatly benefit from more historically appropriate siding that restores the horizontal color and texture variant on the top third of the home.

Wisconsin Historical Society photos from the 1980s show the three houses in good condition. Sometime around the early 2000s is when they were all converted to college rentals, and they have deteriorated significantly since then. Over time, the other historic homes surrounding them have been torn down to build thriftily-constructed, large-scale student housing, putting them at even greater risk of being demolished for the same purpose.

Restoring these homes would reinstate some of the neighborhood’s original character, as well as highlight and preserve an important piece of social history. Just because they are currently relegated to college housing doesn’t mean they can’t be preserved. Even though rental upkeep might be more challenging due to tenant issues, some of their worst deterioration, like exterior rot, are in no way the fault of student occupants.

The Tribune has been publishing articles on Tuesdays about the buildings on HPC’s list of La Crosse’s 10 Most Endangered Historic Places of 2021. The series concludes next week. Basic information about each property can also be found on the city’s heritage preservation website. Anyone seeking more information regarding this project or wanting to nominate endangered historic properties for future lists can contact Tim Acklin in the City Planning Department.

From Tribune files: Life in the La Crosse area in the 1960s

Probe shows WHO knew of sex claims in Congo

One person is reported dead after a motorcycle crash in Monroe County Saturday night, officials reported over the weekend.

A criminal complaint in a case dating back two years has been filed in La Crosse County Circuit Court against a 22-year-old Oronoco, Minnesota…