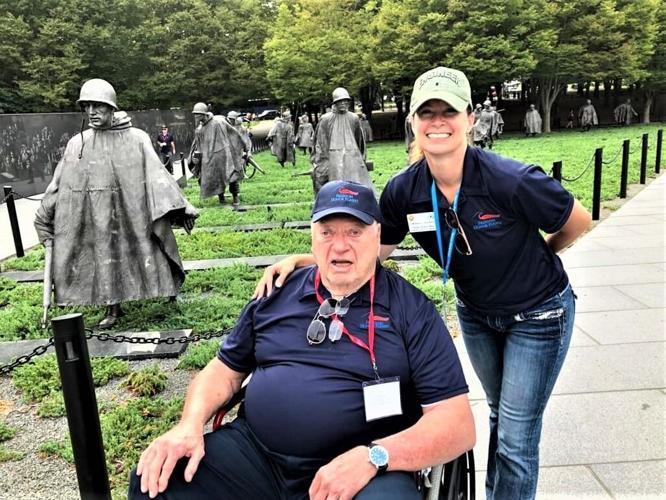 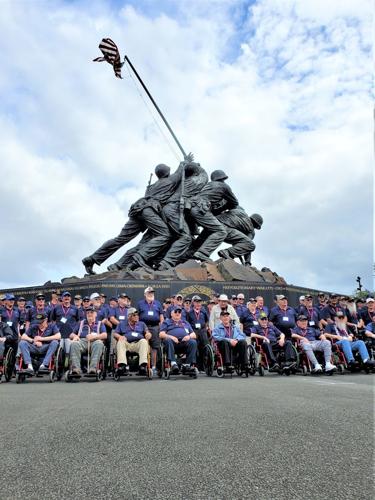 Veterans participating in the Freedom Honor Flight from La Crosse, Wis., are pictured at the Marine Corps Memorial in Washington, D.C. on Sept. 10.

Freedom Honor Flight is a La Crosse-based organization founded in April 2008, said Patti Lokken, a founding board member. Its goal is to fly veterans to Washington, D.C., to visit the memorials that stand in their honor.

“I was the guardian for Mr. John ‘First Class Jack’ Westgard from Rochester, Minn.,” said DiDomenico. “It is a humbling experience, hanging out with these veterans. They get up incredibly early for the 6 a.m. chartered flight out of La Crosse. They see the whirlwind of sites throughout the day.

“Then, they return late at night, and you can see their faces light up when they see the Welcome Home party in their honor,” DiDomenico said. “The entire day is completely free for the veteran, including meals. There are plenty of donations from extremely generous supporters and an awesome display of selfless service from a huge team of coordinators.”

Lokken said she got behind starting the Freedom Honor Flight partly because her father was a World War II veteran who never got to see the World War II monument but donated to it.

“He was a staff sergeant with who had served with the 3rd Infantry Division and in the Battle of the Bulge in World War II,” Lokken said. “He died before he could see any of this, and I know he wanted to see it happen.”

“Toward the end of the war, he was at (Camp) McCoy helping with the outprocessing of Soldiers,” Lokken said. “He didn’t talk a lot about his service but he did tell us that he worked at McCoy during the end of the war.”

DiDomenico and Lokken said those who serve as a guardian escort have to pay a $500 fee to participate. “That fee includes the flight, meals, and everything for the day,” Lokken said.

People who want to consider being a guardian escort, or who might know a veteran to go on the Freedom Honor Flight should visit their website at https://www.freedomhonorflight.org.

“On the website, people can submit applications for a veteran or to be a guardian,” Lokken said. “It’s a pretty easy process and easy to understand.”

DiDomenico said the experience is worth it.

“There are some very cool things that they do, such as escorting a flag onto the plane for a veteran who was scheduled for the flight but passed away before they were able to attend,” DiDomenico said. “And Soldiers or others who want to support but can’t be guardians can show up for the morning send-off or the evening welcome home ceremony. They stand on the flight line and wave to the veterans. It’s a huge morale booster.”

Because they are an all-volunteer organization, Freedom Honor Flight states on their website, that they are not available to answer questions at all business hours.

People can email the organization at info@freedomhonorflight.org.

For Sandy Cleary, the family tie to La Crosse’s Oktoberfest is strong.

The 2022 Oktoberfest Medallion was found Saturday morning, following the release of six clues.

An arrest was made after a man became violent and was found with drugs.

A Melrose man was booked in La Crosse County jail after stealing a check and using a false ID.

Colombia repatriates 274 priceless artifacts from US

Demonstrations in support of Iranian women take place around the world

Demonstrations in support of Iranian women take place around the world

Veterans participating in the Freedom Honor Flight from La Crosse, Wis., are pictured at the Marine Corps Memorial in Washington, D.C. on Sept. 10.