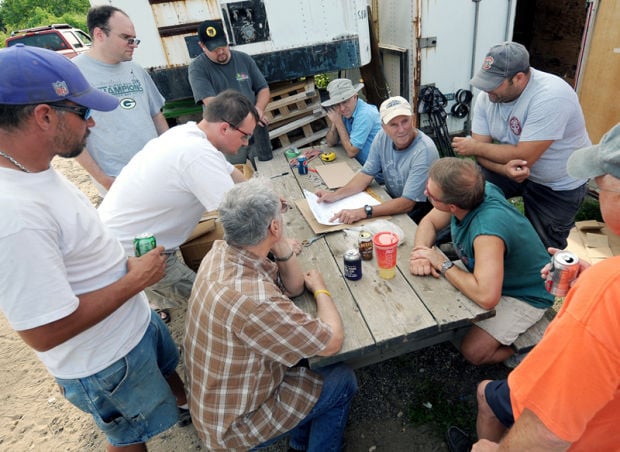 The Skyrockers team discusses the choreography of this year’s Riverfest fireworks display Tuesday in La Crosse. 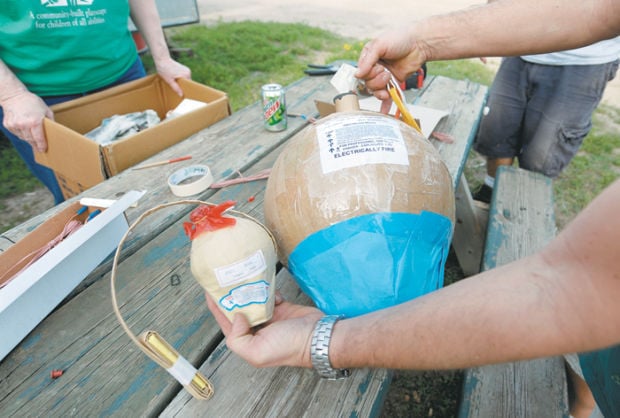 A 4-inch shell, one of the smallest shells used in a Skyrockers fireworks display, next to a 12-inch shell, which is the largest shell used.

The La Crosse Skyrockers have dazzled residents with the annual Riverfest Fourth of July fireworks display for more than 30 years. This year, the group is promising a “unique opener over the water.”

“We always try different ways to highlight the river bank,” Chief Skyrocker Pat Bonadurer said. “And we try to do something different every year.”

The Skyrockers will choreograph a show to patriotic music. Each song will feature different illuminations, and the fireworks will vary according to the tempo of the songs.

The display will also include traditional action shell fireworks and feature specialty shells when the music hits a fast pace.

Bonadurer said the Skyrockers prefer to light off the fireworks themselves instead of programming them to a computer because “it’s a little more rewarding.” The group spends months planning the Fourth of July fireworks show and has never missed a performance, even when Bonadurer’s daughter Meg was born on the holiday 21 years ago.

This year’s show will be 23 minutes long and include more than 400 shells.

“There’s something spectacular about the anticipation of waiting for the fireworks to shoot off,” Riverfest President Tammy Klein said. “It’s beautiful.”

Firecrackers, bottle rockets and Roman candles are easy to buy during the Fourth of July season, but they’re not all legal to set off.

Fireworks that explode or leave the ground require a special permit to use, and specific clubs, like the La Crosse Skyrockers, are the only ones who get them.

“We don’t just give those permits out to the general public,” Warren Thomas, assistant chief of the La Crosse Fire Department, said. “Only organizations.”

Although illegal fireworks are OK to buy, La Crosse Police Sgt. Randy Rank said residents can be charged a fine of $114 if they’re caught setting them off. Police responded to 68 complaints last year during the week of the Fourth and 28 this year since June 1.

And that number is only expected to rise.

“Everyone knows it’s illegal to light off fireworks,” Thomas said. “But it’s the Fourth of July.”

Laws against setting off illegal fireworks are seldom enforced because of their low priority compared to other crimes. But Rank said police know people are going to use them and respond to every complaint they get.

“Firework complaints get pushed down to the bottom,” Rank said. “But they are a problem.”

Thomas encourages residents to stay away from consumer fireworks all together and watch the Skyrockers perform at Riverfest instead.

“They’re the best in the area by far,” he said “They’re safety conscious and they know what they’re doing.”

It’s sparklers, not the big boomers, that cause the most injuries.

“One thing that I think people think is a safe option is sparklers, but really they’re not,” said Gundersen Health Systems injury prevention specialist Kim Lombard. “They can reach temperatures up to 2,000 degrees Fahrenheit, which is the same temperature that blow torches operate.”

More than 9,600 people were hurt setting off fireworks last year, according to U.S. Consumer Product Safety Commission estimates. Locally, injured fingers are the most common.

According to the National Fire Protection Association, 26 percent of victims of firework-related injuries in 2011 were under the age of 15.

“As innocent as sparklers are, they burn extremely hot and can easily burn the skin,” said Lance Tryggestad, president of the International Association of Firefighters Local 127. “They’re exciting, but they can still cause some injuries.”

Lombard said the safest way to enjoy fireworks is to watch the professionals. But if at-home fireworks are a part of the agenda, she recommends designating one adult to light them off and to limit alcohol intake.

Hitting the road this week?

The tiny town of Eastman’s Fourth of July parade has been canceled this year to make way for motorists being detoured by construction on Hwy. …

Government offices and many businesses in La Crosse will be closed Thursday for the Fourth of July holiday. A partial holiday schedule includes:

Do you plan to attend Riverfest this year?

The Skyrockers team discusses the choreography of this year’s Riverfest fireworks display Tuesday in La Crosse.

A 4-inch shell, one of the smallest shells used in a Skyrockers fireworks display, next to a 12-inch shell, which is the largest shell used.