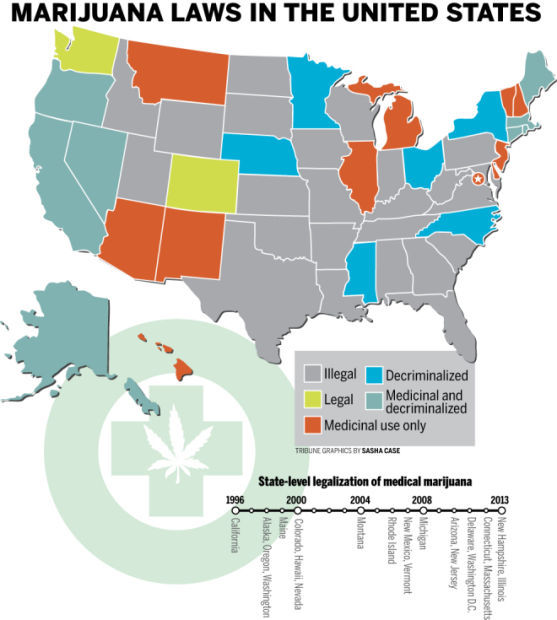 Nobody wants to be a criminal. That’s the thought that crosses John’s mind each night as he gets ready for bed. Part of his nightly routine involves breaking the law, but he isn’t losing any sleep over it. In fact, it’s exactly the opposite.

John (not his real name) uses medical marijuana to manage the chronic, neuropathic pain that he’s lived with for the past nine years. Surgery to correct a herniated disc left scar tissue that put pressure on a root nerve, causing unbearable pain in his leg and foot. During the day he could keep himself distracted enough to cope, but at night he would lie awake in agony — sometimes going as many as five nights without sleep.

His doctors at Gundersen Health System, unable to treat the source of his pain, tried to treat the symptoms. A long list of powerful opiates did little to dull the ache, and the side effects left him walking in a constant fog.

He tried acupuncture, an inversion table, homemade pressure braces for his foot. He’s had anti-inflammatory medicine injected into the base of his spine. He’s seen four physical therapists, including one in the Twin Cities whom he took 15 round trips to see, paying for his visits out of pocket. A spinal specialist in Madison finally told him he was among the 1 percent of patients who would never get relief.

As a last resort, John turned to marijuana. In his younger years, he “used to smoke a little pot,” but now, in his 70s, he says he has no interest in getting high. Intrigued by the drug’s potential as a pain reliever and out of other options, he ate a pot brownie before bedtime. He slept through the night.

“This stuff has worked wonderfully for me when nothing else did,” he said. “I have friends with cancer and chronic pain — I know this could help them too. But if I were to offer them some, would I be a friend, or would I be a felon?”

There are thousands of Wisconsin residents illegally using medical marijuana, said Gary Storck, a Madison medical marijuana activist who co-founded the Wisconsin and Madison chapters of the National Organization for the Reform of Marijuana Laws and the nonprofit IMMLY (Is My Medicine Legal Yet?).

“So many people have been forced into making that choice,” said Storck, who has used marijuana to treat his glaucoma for decades. “People are going to do it anyway, if they’re willing to break the law.”

But if some Wisconsin lawmakers have their way, they won’t have to. Previous attempts to pass a medical marijuana legalization bill in Wisconsin have failed, but that won’t stop Democrats from trying again this year.

Sen. John Erpenbach of Middleton and Rep. Chris Taylor of Madison will introduce a legalization bill when the legislature reconvenes for its fall session. This is the third time Erpenbach has co-sponsored such a bill; Taylor is taking the place of former Rep. Mark Pocan, who was elected to the U.S. House of Representatives last year.

“It will be tough this time,” Erpenbach said. “It was tough last time when Democrats were in the majority.”

This year’s version of the bill remains essentially unchanged from the 2012 version which died in committee, Erpenbach said. It would provide a “medical necessity” defense for marijuana-related prosecutions, which means that Wisconsin residents may “acquire, possess, cultivate, transport or utilize” marijuana if they have a registry identification card from the Department of Health Services, a valid out-of-state registry identification card or a written certification from a physician, according to the bill’s most recent version.

The law limits the amount a cardholder can legally possess to 12 plants and three ounces of marijuana leaves or flowers. The drug would be dispensed at marijuana dispensaries, known as “compassion centers,” which would be licensed and regulated by the DHS.

Support for the bill among La Crosse area elected officials is strong, although the region is primarily represented by Democrats. Rep. Chris Danou of Trempealeau has co-sponsored the two previously introduced legalization bills and plans to do so again this year.

“If something has the potential to work for (patients), has demonstrated that it can make life a little more bearable and more comfortable, why should we deny you that?” he said.

A former police officer, Danou said he’s confident law enforcement can adapt to the changes if marijuana becomes legal and treat the drug’s use the same way they treat alcohol consumption.

“It’s already illegal to drive under the influence,” he said.

Rep. Steve Doyle of Onalaska said he would support the legislation, assuming the final version of bill includes the restrictions that the drug is used by people with legitimate medical conditions.

“From what I’ve seen with the experiences in other states, it doesn’t look like there’s a lot of outright abuse,” he said.

But would it pass? Not likely, said Sen. Jennifer Shilling of La Crosse. Like other area Democrats, she said she would likely vote for the bill if it made it through committee, but noted that both the Senate and Assembly health committees are chaired by Republicans. Sen. Leah Vukmir of Waukesha is a vocal opponent to legalizing medical marijuana and Rep. Erik Severson of Star Prairie said he would not give the bill a hearing.

“I don’t have a sense that the leadership in the Senate or the Assembly has any interest in passing the law,” Shilling said.

Doyle and Danou are skeptical as well, citing the need for moderate or libertarian-leaning lawmakers to make the bill a priority.

“It’s been hanging around for a while,” Doyle said. “I don’t see the prospects as great.”

Marijuana was listed in the United States Pharmacopeia from 1850 until 1942 and was once widely prescribed for a variety of ailments including epilepsy, nausea and rheumatism.

But since the passage of the Controlled Substance Act in 1970, the federal government has classified marijuana as a Schedule I drug, which means it has “no currently accepted medical use” and a “high potential for abuse.” Other Schedule I drugs include heroin, LSD, Ecstasy, Quaaludes and peyote.

Schedule I classification presents a significant roadblock for researchers, but in 2000, the Center for Medicinal Cannabis Research began a series of clinical human trials through the University of California – San Diego.

“I don’t know of any comparable research effort anywhere,” said J.H. Atkinson, CMCR’s co-director. “It’s certainly the most comprehensive piece of research on the medical aspect of cannabis in the last 40 years, at least in the U.S.”

Over the past decade, CMCR studied the effect of smoked cannabis on neuropathic pain, a hard-to-treat condition caused by infectious disease, diabetes and nerve injury from physical trauma.

“The results were pretty much congruent,” Atkinson said. “Cannabis had a marked effect — such that about 50 percent of people got at least 30 percent pain relief.”

The Wisconsin Medical Society opposes medical marijuana legislation, not because the drug isn’t effective, but because it involves the approval of a new drug by a legislative act rather than the standard drug approval process through the FDA, said Dr. Michael Miller, vice speaker of the WMS.

“Medical marijuana is a political issue, not a medical issue,” he said. “Physicians have been co-opted into taking a political act (when they) write a permission that allows a patient to avoid prosecution.”

He noted that the active ingredient in marijuana, tetrahydrocannabinol (THC), is already available and legal in an oral drug called Marinol, which is used to treat nausea, vomiting and loss of appetite in AIDS patients.

Miller also cautioned that marijuana has its risks. Studies have shown that the drug can precipitate schizophrenia among individuals with a genetic predisposition for the condition, and about 9 percent of people who use the drug could become addicted, according to the National Institute for Drug Abuse. Smoking, which is the most common way to administer the drug, carries risk as well.

“The general assumption that it’s broadly safe is not supported by the evidence,” he said.

Pew Center data shows that public support for marijuana legalization has risen steadily over the past several decades, and for the first time this year, the majority favors legalization.

As of Aug. 1, 20 states plus Washington, D.C., have some form of legalized marijuana. The states with the most lenient marijuana laws are Colorado and Washington, where the drug is legal for medicinal and recreational use. Other states place strict limitations on how much a patient can legally possess and many laws prevent people from growing their own.

There are four states with pending legislation that would legalize medical marijuana. Minnesota, New York, Pennsylvania and Ohio all had bills introduced this year that were not voted on this legislative session, but they all carry over for consideration in 2014.

Thirteen other states had legislation introduced this year that would have legalized or decriminalized medical marijuana. Those proposals died at the committee level or when the legislative session ended.

While it seems unlikely that Wisconsin will follow suit, Erpenbach and Taylor say it’s only a matter of time, and they’ll continue to introduce a medical marijuana legalization bill until it passes.

“This is something the Wisconsin majority has supported for a while now,” Erpenbach said. “The Legislature is behind the curve.”

This unknown detail about Stonehenge might blow your mind

This unknown detail about Stonehenge might blow your mind

New book aims to teach history of US civil rights

New book aims to teach history of US civil rights

Should Wisconsin legalize marijuana for medical use?

Members of law enforcement are among the biggest opponents of marijuana legalization, citing concerns over potential increases in impaired dri…