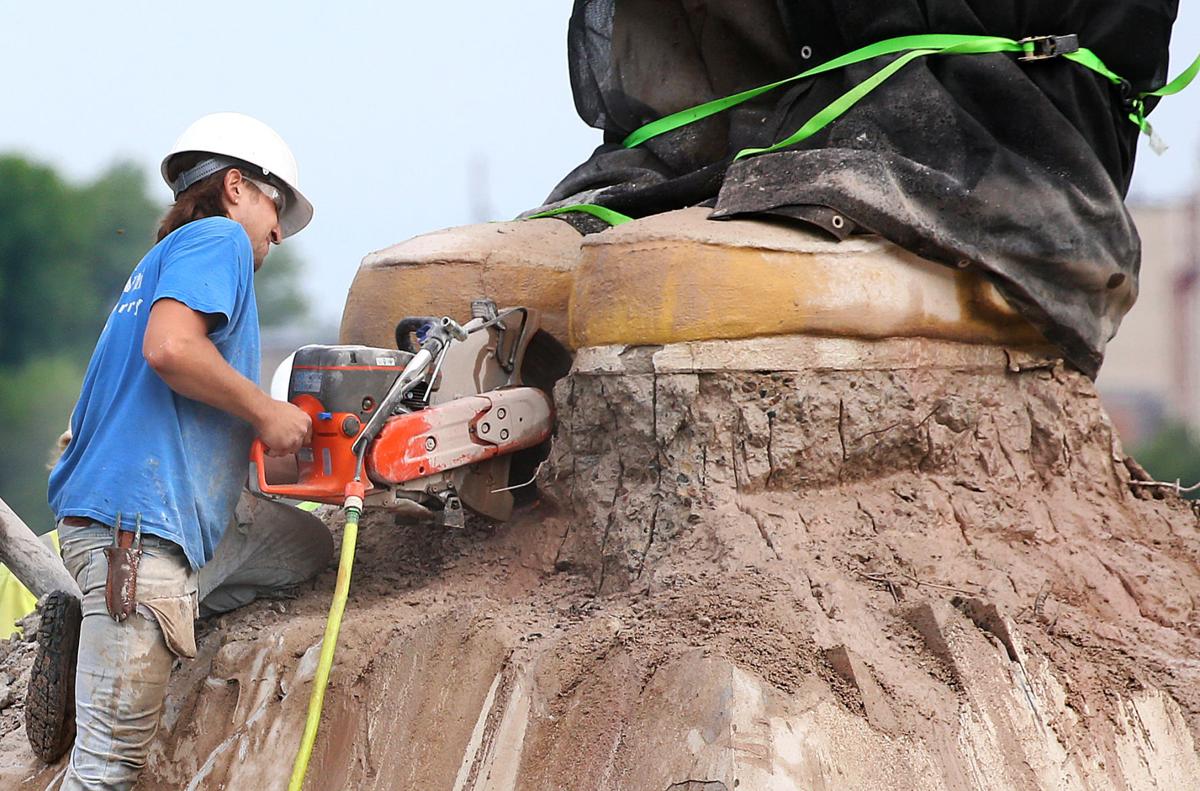 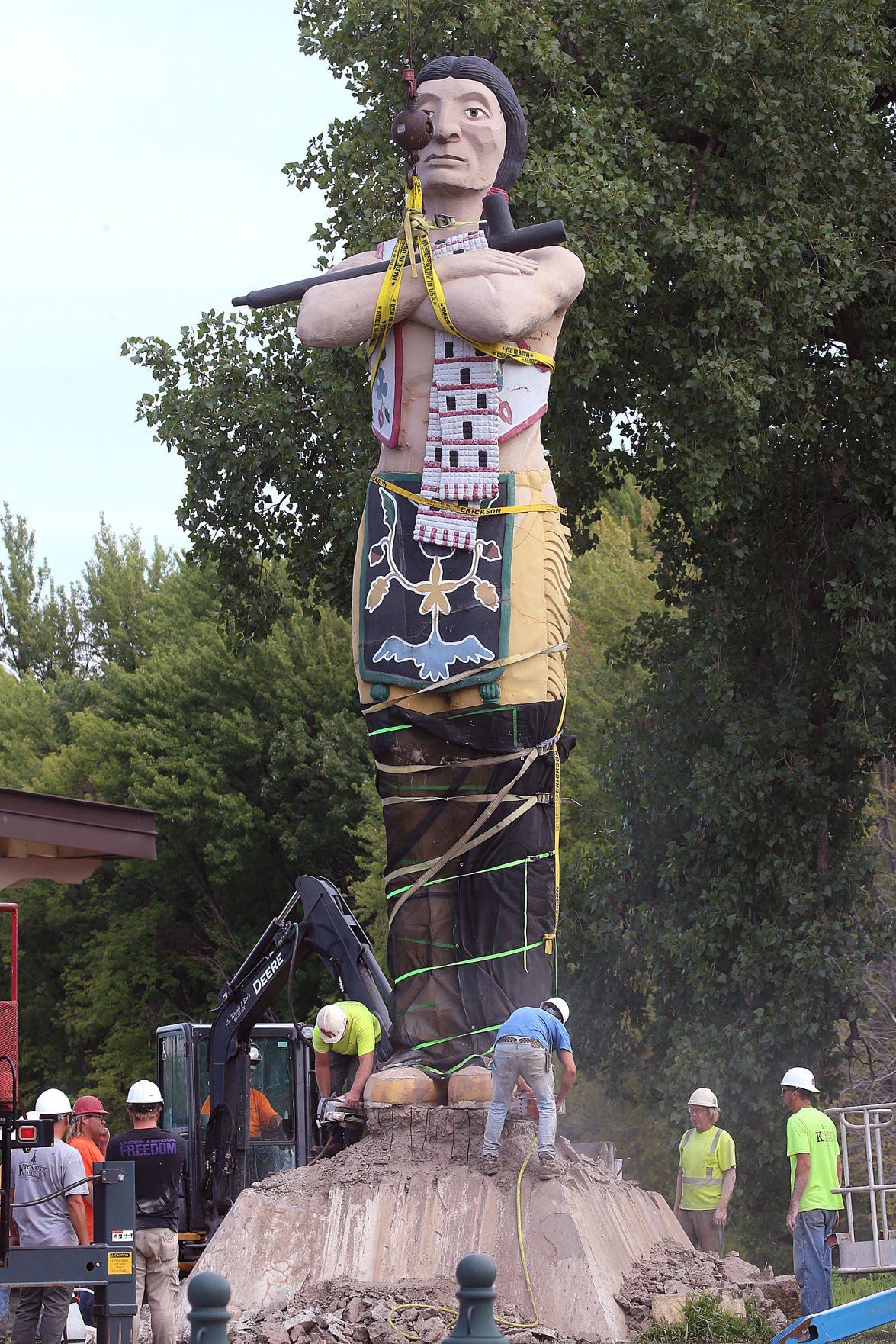 A crew from Krause Konstruction out of Coon Valley works to remove the Hiawatha statue from its pedestal at the north end of Riverside Park. 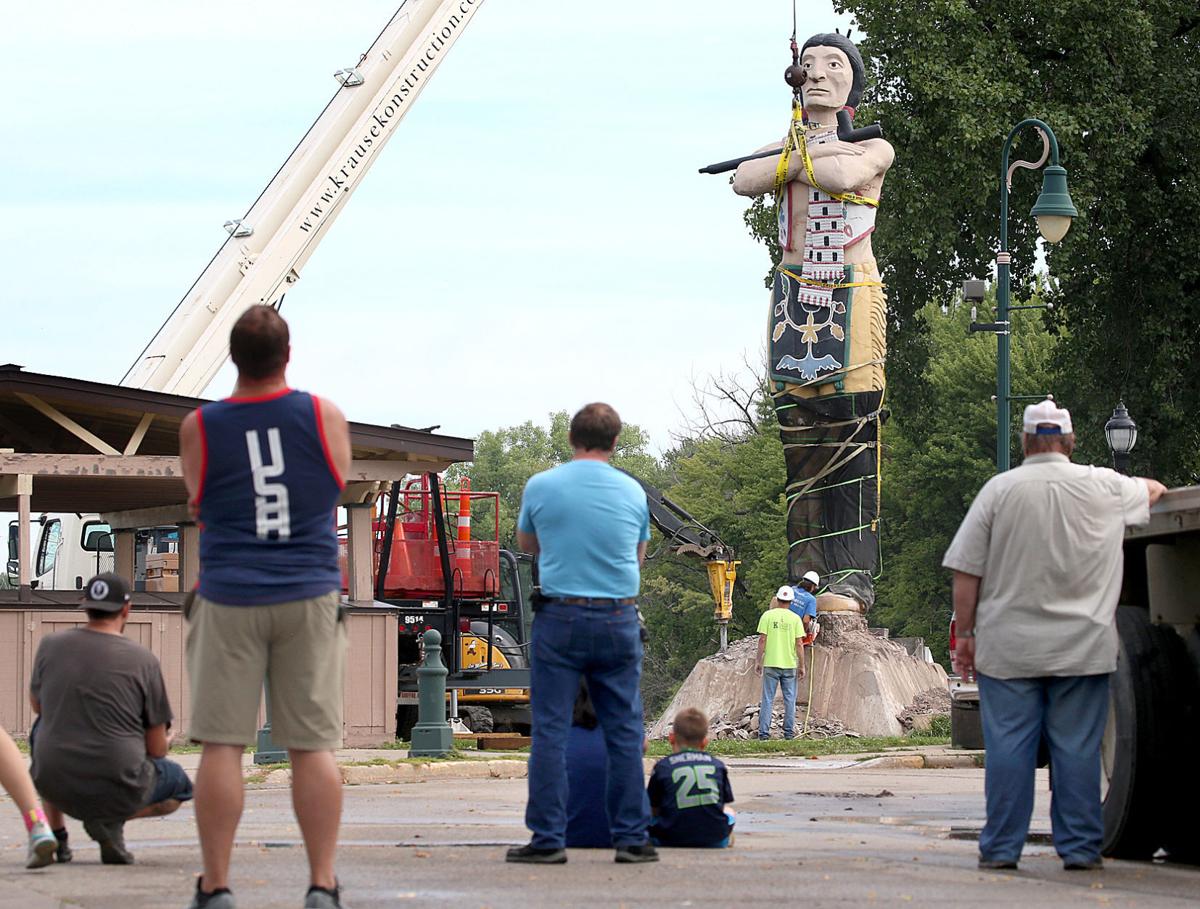 Onlookers pooled around the north end of Riverside Park Monday morning as crews worked on removing the Hiawatha statue, after city officials unanimously voted for its removal because of its false narrative of Indigenous people.

La Crosse’s Indigenous community and its allies have called for the statue’s removal for decades — which was originally commissioned to draw more tourism to the area — saying it falsely depicted the tribes native to the area in a derogatory stereotype of a mix of tribes.

After the statue is lifted by crane onto a flatbed truck, the family of the statue’s artist will store it until it can be re-erected at its new home.

The city originally intended to temporarily store the statue, but because a new location has already been identified, the family will assume ownership as soon as the statue is hauled out of the park.

The family of artist Anthony Zimmerhakl and a third party, who are choosing to remain anonymous at this time, plan to situate the statue at a new, undisclosed location that is not within city limits, but is a “convenient drive” from La Crosse, officials said.

Crews began jackhammering at the concrete base of the 25-foot statue around 6:30 a.m. on Monday, but stopped work mid-day because of an issue with the steel beams keeping the statue upright.

Eventually a crane will be used to lift the statue onto the truck.

The concrete base will then be removed, and dirt and grass seed will then be laid over the spot it once sat towering, until a new use for the space is found.

The city hired an experienced contracting crew to remove the statue, officials said, and ratchet straps, security netting and other safety measures were in-place to keep the statue intact during the move.

“Nobody really knew what we were getting into until we started jackhammering away. Really, one of the positives is that the statue is staying intact,” said Jay Odegaard, city of La Crosse Parks, Recreation and Forestry Department.

Officials said that though the city voted to remove the statue, it was dedicated to preserving it as a piece of artwork for the sculptor’s family.

“I think in the end,” Odegaard said, “there’s a lot of contentious feelings with this statue. And I think something that really needs some clarification, is that the city isn’t in the business in trying to determine what art is good or bad.”

In the conversations leading up to its removal, officials also indicated they hoped to replace the statue with something more representative of La Crosse’s Indigenous communities.

But given budget constraints and logistical restraints, like developing in flood plains that weren’t there when the Hiawatha statue was erected in the 1960s, it’s unclear what that replacement could be or when it can be expected.

“Will something go there? I don’t know,” Odegaard said. “The last thing I think we should try to do is jump into any kind of rush to replace it.”

The city’s Board of Park Commissioners will approve an art agreement form for the spot later this month, that will outline specific details that need to be answered before a replacement could be approved.

“When a lot of these statues and artwork are going into place, the hard questions sometimes aren’t answered,” Odegaard said, like utilities, maintenance and the artworks lifespan.

Regardless of what and when, Odegaard said that Indigenous communities will be included in the plans for new art overlooking where the Mississippi, Black and La Crosse Rivers meet.

Though not completely removed Monday, after it is hauled away, the Hiawatha statue will wait in storage, and is not expected to be re-erected until next year.

Martine has been with the county since 2003 and has most recently served as the deputy director of the La Crosse County Human Services Department.

The "COVID Recovery Microenterprise Grant" program, announced Tuesday afternoon, would offer grants between $1,000-$20,000 for county businesses outside of La Crosse with five or fewer employees.

The city aims to purchase $6,503,865 worth of new equipment next year to replace and upgrade different systems and items.

"We want to keep the lines of communication open both with the public and with law enforcement, and we certainly want to improve the systemic impacts, or the inequities that may exist."

The report shows the city is unlikely to meet some of its goals like reduced energy and fuel consumption in the next four years.

A group of local leaders and advocates held a rally Tuesday in North Side La Crosse in support of legalizing marijuana in Wisconsin, hosting i…

A crew from Krause Konstruction out of Coon Valley works to remove the Hiawatha statue from its pedestal at the north end of Riverside Park. 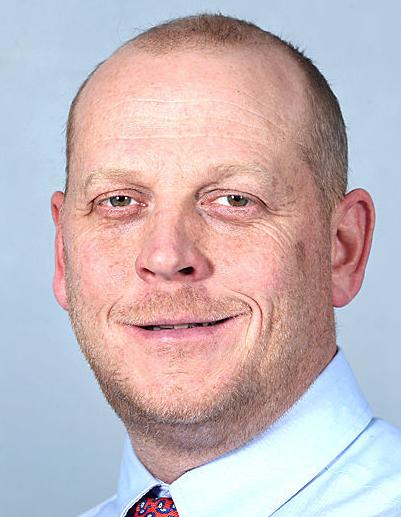