Shoua Thao’s parents were among the thousands of Hmong immigrants to find refuge in the United States in the aftermath of the Vietnam War, and yet she knew nothing of their plight until fourth grade, discovering the horrors and devastation of the “Secret War.”

The catalyst for the migration of thousands of Hmong to America, the seldom-discussed war within the Vietnam War is an integral part of Hmong history, a story area fourth-graders, and community members, heard firsthand during Community Days: The Hmong Education Project, held Monday and Tuesday at the Hmoob Center.

Formed a decade ago to create more inclusive curriculum in the La Crosse School District, the Hmong Education Project aspires to inform children of all ethnicities about the history, culture and immigration of the Hmong people, including those in the Coulee Region.

“The majority of Hmong children are in the dark, too,” said Tony Yang, vice president of the Hmoob Cultural and Community Agency. “Their parents don’t speak English, they’re busy at work and they don’t have the time to tell them. Even if they’re told, they can’t look at or (imagine) the experience.”

Students and visitors toured through four stations during the Community Days event, each chronicling the unrest in the Asian country when, several years into the Vietnam War, Laos became the focal point of America’s efforts to stop the spread of communism in Southeast Asia.

The U.S. and Thailand allied with the South Vietnam-backed Royal Laotian Party against the communist Pathet Lao in the civil war in Laos, despite the agreement between the U.S. and North Vietnam that Laos would remain neutral. The CIA created an army of Hmong soldiers to fight the battle, but the U.S. pulled its soldiers after a cease-fire treaty in 1973. Two year later, Pathet Lao took power, aided by communist North Vietnam, and waged a Hmong genocide, targeting those who sided with the CIA.

“It was traumatic,” said Nao Tou Lor, one of several Secret War veterans at the event. “In Laos, we had a lot of fighting.”

An estimated 30,000 to 40,000 Hmong soldiers died in the war, a quarter of the Hmong male population. Some 120,000 became refugees, fleeing to Thailand in an arduous journey through the jungle and across the Mekong River. By 1980, around 30,000 of them had immigrated to the U.S.

After Minnesota, Wisconsin is the state with the highest percentage of Hmong individuals, with a large wave of immigrants relocating to La Crosse in the late 1970s through early 1980s, for a total of about 800 by 1982. The Hmong Mutual Assistance Association opened that year to help refugees resettle in the Coulee Region.

Hmoob Agency staff began the mock journey in the Hmong village, where a bamboo and wood hut was displayed along with traditional tools for grinding rice and corn and forming sticky rice patties.

Huts, roofed with reeds and banana leaves, were constructed with gaps between the walls to let out smoke from the small interior stove. Visitors were invited to tour the inside the display home, with a bamboo cot and dolls made from stripped corn cobs and string.

When the sirens sounded, the group moved on to the jungle, staged in a dark room with trees, plants and a river at the border. Many of the Hmong, especially those who resided in the mountains, never learned to swim, explained Thao. If they could afford to, they hired fishermen to take them across the Mekong, or fashioned rafts from bamboo.

Yang listed off the “rules of the jungle,” a roster of safety precautions to avoid detection by the communists and prevent injuries or becoming lost: Follow the directions of your elder. No voices. No cooking during daytime. Hold the shirt of the person in front of you. If enemy soldiers come, stop, kneel, hands over your head, be still. Leave no tracks.

Those who made it safely to Thailand were housed in five refugee camps, then flown from Bangkok to America, Thao said, showing a dim room lined with cots to represent the camps.

The tour concluded in “America,” and attendees were invited to try on traditional Hmong garments, view a replica village crafted by Hmong elders at the La Crosse County Aging Unit and study a traditional story quilt, depicting the journey with elaborate embroidered people, scenery and landmarks.

“Hopefully we can bring that heritage alive today,” Thao said.

James Murray, who brought sons Sam, 8, and Ben, 7, said he was learning as much as his children. Stressing the importance of knowing each other’s history, he felt the event was a valuable way to connect with the community members we see daily but may not have interacted with.

“Hmong people are our neighbors,” Murray said. “I hope (my kids) take away a greater appreciation of our neighbors and a greater understanding of our past.”

COLUMBUS, Ohio — In apartment complexes on opposite sides of town, the women — one a former shopkeeper from Somalia, the other a teacher from … 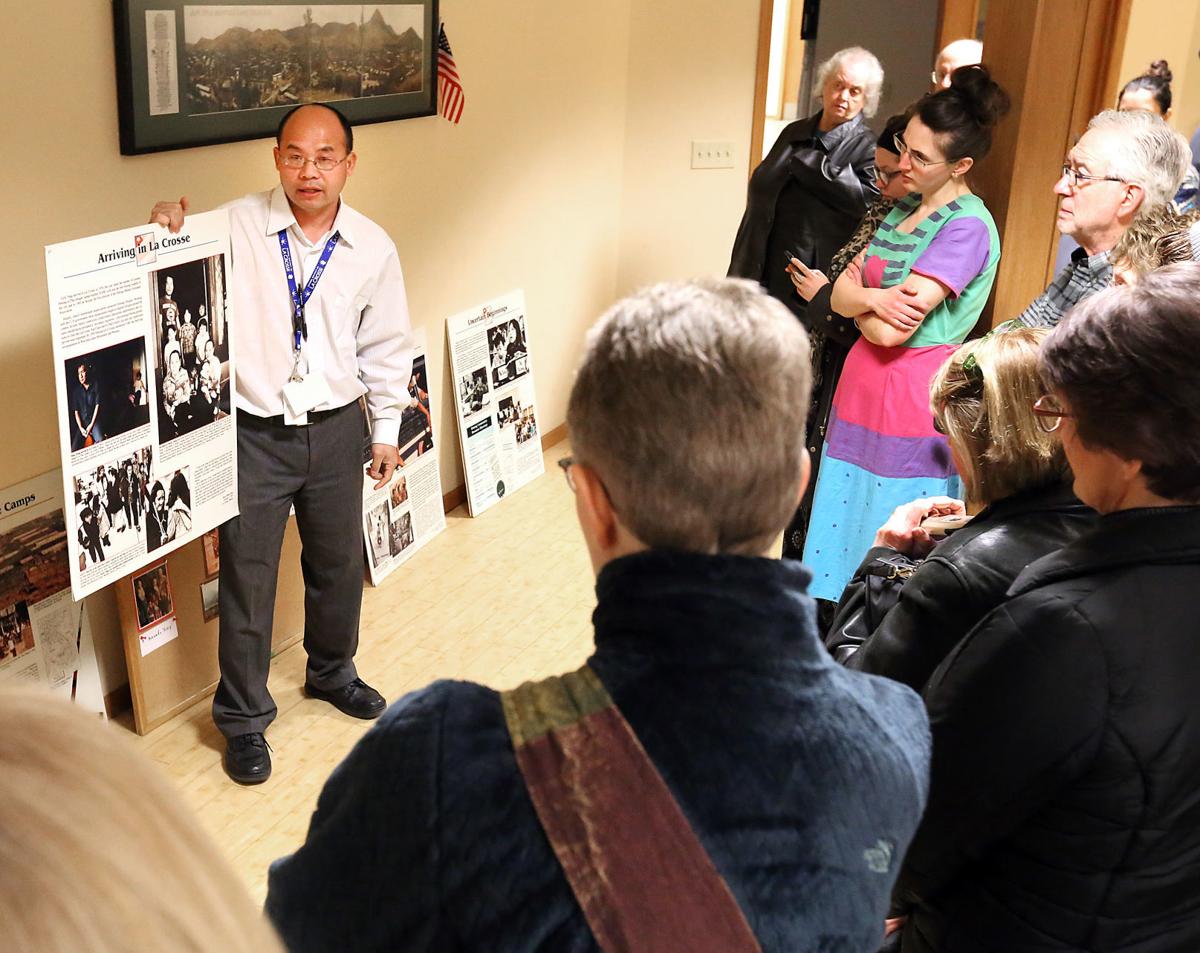 Tony Yang shares his experiences coming to the United States during the Community Days event at the Hmoob Center. 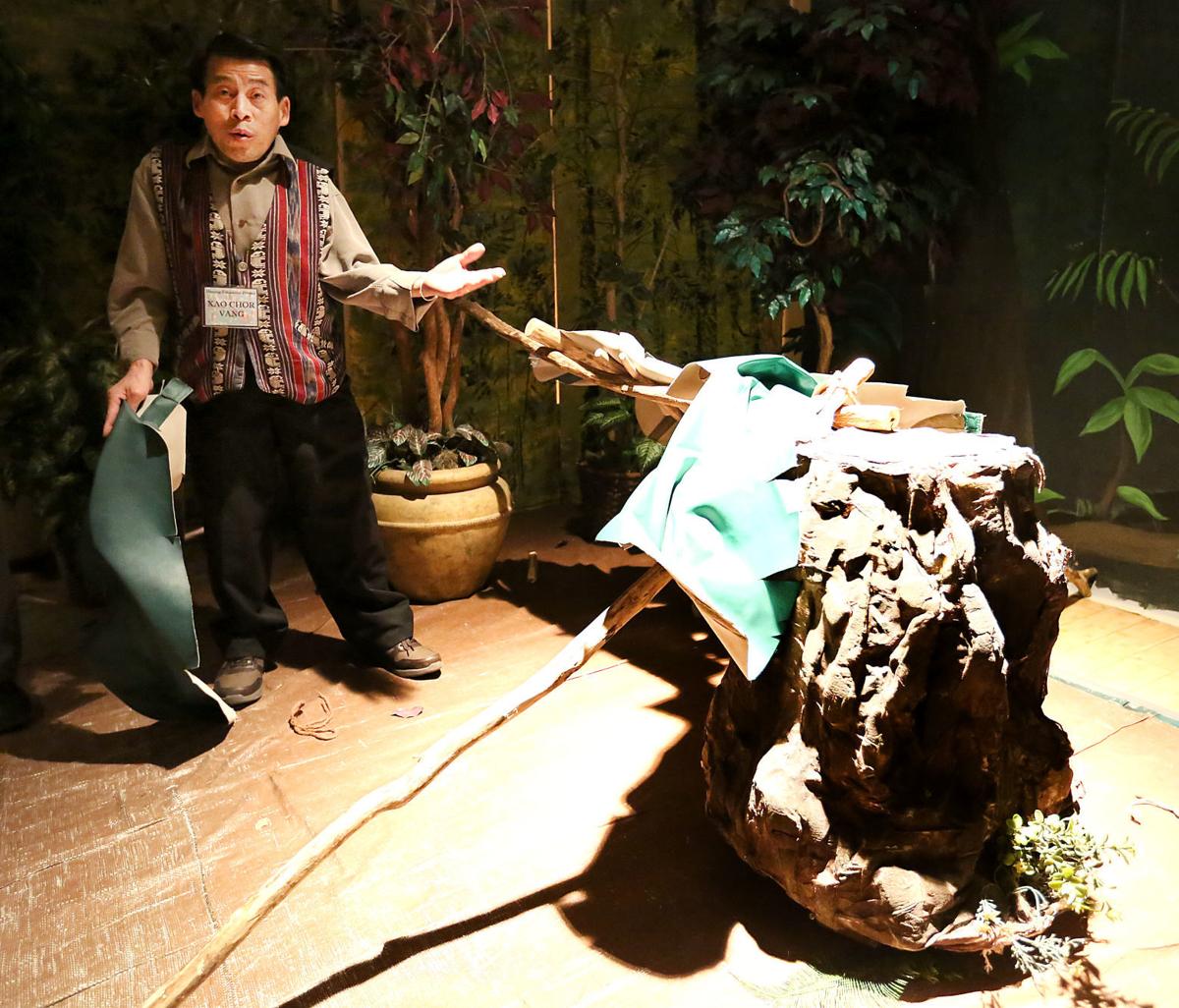 Xao Vang describes what it was like for Hmong refugees living in jungles as they tried to get to Thailand. The display was part of the Community Days event Monday and Tuesday at the Hmoob Center.