When the UPS man came knocking with a dolley piled high with packages, Jennifer Larson immediately knew they were for her youngest son. And that the boxes would be filled not with toys, or clothes, but yarn. Skein after skein of yarn.

It’s not uncommon for 11-year-old Jonah to arrive home from school to balls of yarn and encouraging notes from around the world, sent by the thousands from fans who follow the young crochet prodigy on social media and drape their couches with his one-of-a-kind blankets.

“In the basement we have 20 totes (full). He gets boxes of yarn from all over — England, Canada,” Jennifer said. “I think they’re worried the art of crocheting is going to end, and they’re just excited a young person will carry it on.”

Jonah’s passion for the craft started on a whim, when he discovered a hook in a box of craft supplies at the age of 5. Finding a You Tube video on basic stitches, Jonah completed a dish cloth in an hour. He was hooked.

“It was very relaxing after a hard day at school,” Jonah said, whipping through a sprawling blue blanket at his home Wednesday afternoon, eyes ahead and fingers working furiously.

The precocious boy — a sixth-grader at Lincoln Middle School who takes ninth-grade algebra — participates in cross country, basketball and baseball but considers crochet his first love. As a kindergartener, having already advanced to hats, blankets and scarves, he entered his handiwork in the La Crosse County Fair, competing against — and triumphing over — “the grandmas.”

“Considering the circumstances, it felt awesome,” says Jonah, who took home seven ribbons the next year and now has around 70 in his collection. “I’m really proud of all the things I make.”

Jennifer, who has never crocheted herself, was initially concerned Jonah might be bullied for his unusual hobby. But his classmates have been nothing but kind, some even asking for lessons last year when Jonah’s teacher allowed him to stitch after completing his homework. While his teenage brother, Leif, has no interest in fiber art, and little sister Mercy has yet to try her hand at it, Jonah has inspired many to reach for their hooks and yarn, and gleaned even more admirers. His Instagram page of finished projects, Jonah’s Hands, has more than 2,480 followers, with comments reading “Wow, you are gifted!” and “I’m just super impressed by you.”

A few individuals voiced doubts the massive blankets, intricate table runners and cozy mittens could have come from the hands of a child, but a video of Jonah stitching a cowl at rapid speed — without looking at his hands — dispelled any skepticism.

“His fingers are just ablaze, churning out this stuff that is just gorgeous,” said Jeff Thompson, who commissioned two mermaid tail blanket sets for his granddaughters and their dolls. “His work I think is extraordinary for a young man his age. He’s a fascinating young man who is very bright and very capable.”

Jonah, who can finish a blanket in as little as eight hours, spends about 4½ hours a day on his craft, getting in a few stitches in the morning and then joining his mom on the couch after school to watch the news and chat as he works.

“He’s much more fascinated to see what beautiful thing he can make from that string of yarn than playing a video game,” said Jennifer, who, much to Jonah’s dismay, has drawn the line at him crocheting during dinner.

Through Jennifer’s account, Jonah is among the 116,000 members of the Crochet Crowd Stitch Social Facebook group, as well as belonging to the Bella Coco Crochet Club. His most elaborate creations, including a blanket made from 800 individually crocheted flowers, draw gasps from the most seasoned crocheters and an admirer in England recently gifted him a set of hooks engraved with his name. Many fans have asked him to post online tutorials, and craft companies including Bluprint send Jonah heaps of yarn, of which he is an connoisseur.

“Caron Simply Soft is the best for cowls,” Jonah asserted. “It’s soft, but not too soft, drapey and a has a wide selection of colors.”

With hundreds of stitch styles in his arsenal, a knack for color combinations and gift for making his own patterns, Jonah has been flooded with custom orders from as far as Malta and Lebanon for crocheted octopuses, dog sweaters, afghans and accessories.

Two years ago, Jonah turned his hobby into an enterprise of sorts called Jonah’s Hands. The talented preteen has sold more than 100 cowls alone and shipped out 50 items for the 2018 Christmas season, all adorned with a metal tag reading “Jonah’s Hands.” Many customers send back photos of themselves wearing or holding his wares.

“People think he’ll be famous,” says Jennifer, who occasionally has to tell customers to check in later, not wanting Jonah to be overwhelmed. “It’s kind of a little factory here at times,”

Jonah pays for his supplies, careful to watch for sales and coupons and keeps the proceeds from his sales, saving for “college, retirement and anything I want to buy otherwise.” He donated $400 to an organization in Ethiopia, from where he was adopted by Jennifer and husband Christopher at six months old, and would like to save for a visit there as well.

Jonah gifts many of his handicrafts to family, including a dog bed for pooch Charlie, a sweater for Yorkie-poo Bella and a cardigan for Jennifer. Among the few items he has kept for himself are a stuffed snake, created after Jennifer refused him a real one, and an impossibly soft blanket in ombre sunset hues.

“It’s my favorite — the colors and the intricacy of the stitch and the border I made up,” Jonah said.

Someday, Jonah plans to put his hands to work as an orthodontist or surgeon, but there will always be time for triple trebles and turning chains.

“I’m going to be an old man crocheting,” Jonah said. “I’m an old soul in a young person.” 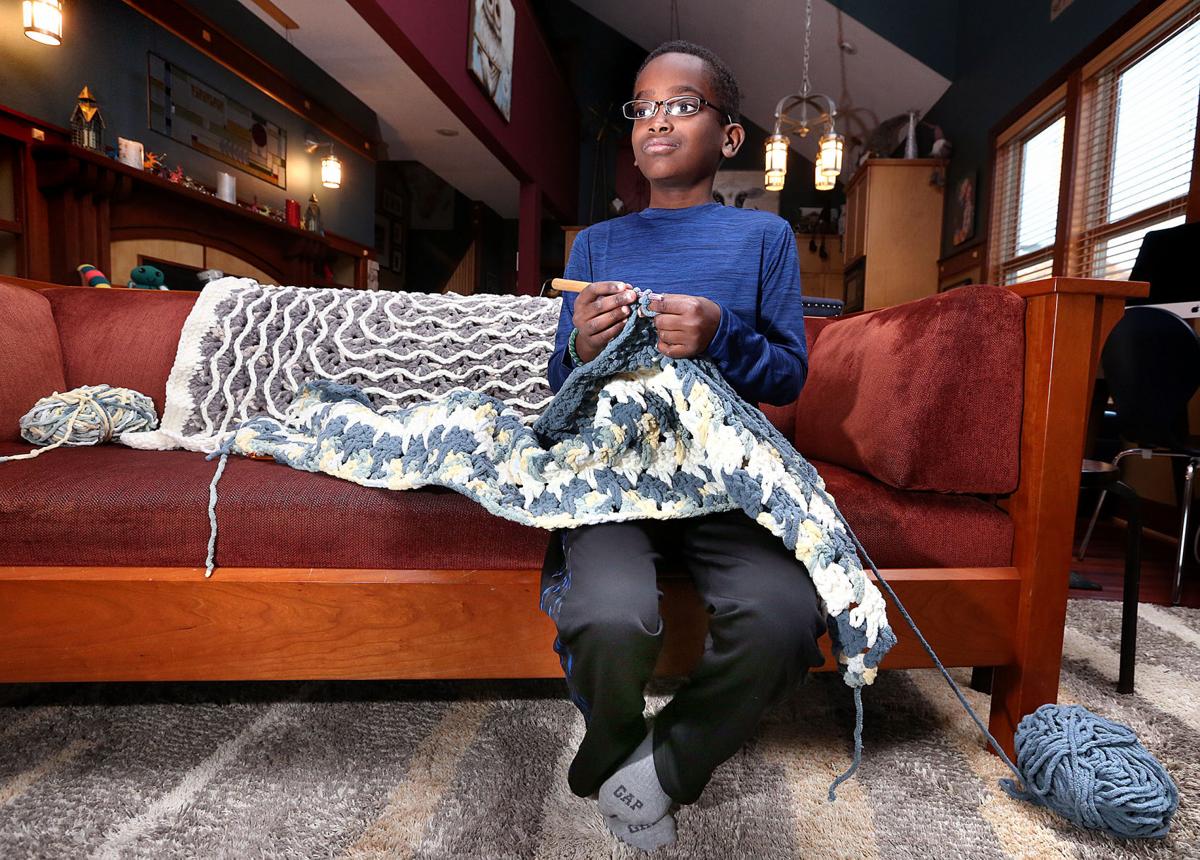 Jonah Larson, 11, crochets an afghan style blanket Wednesday at his La Crosse home. Larson, who started crocheting at the age of 5, is often referred to as a prodigy in the crochet community. 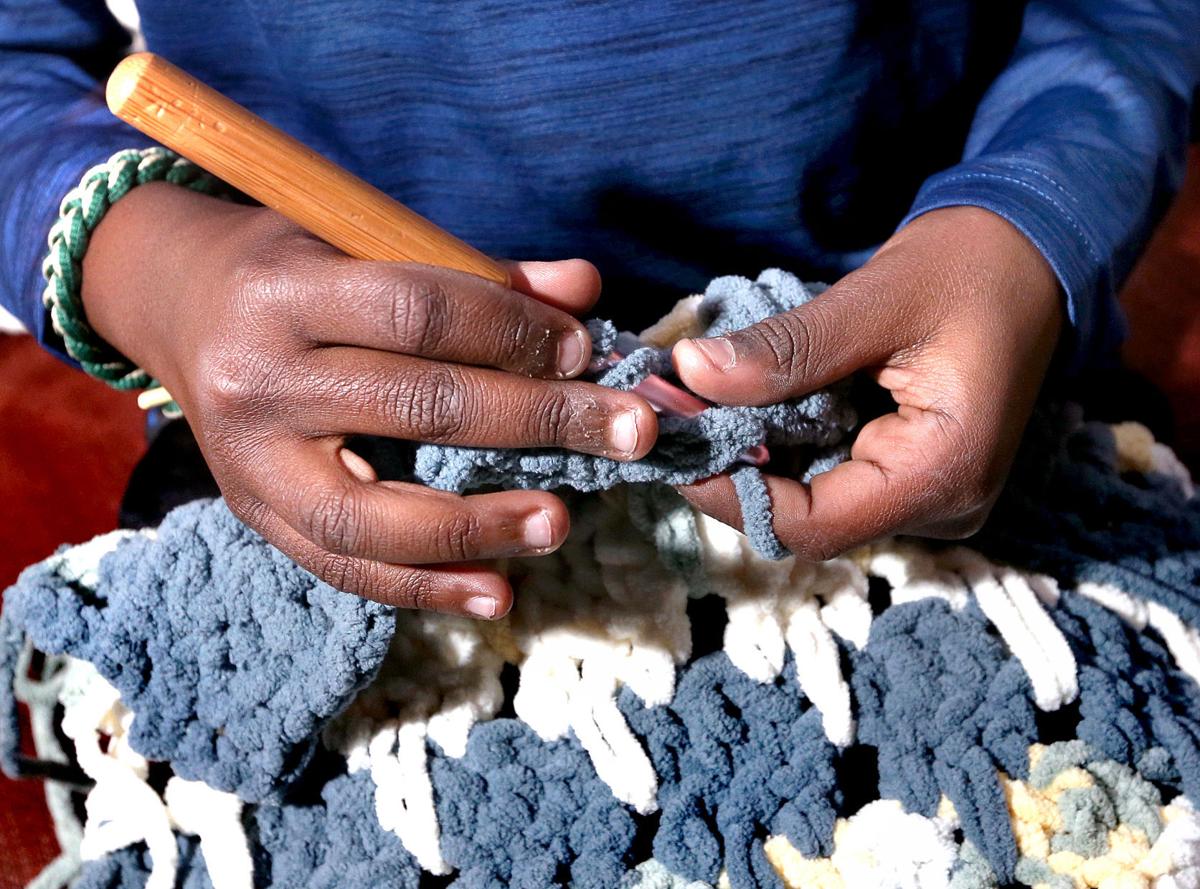 Child crocheter Jonah Larson has sold his creations internationally, including recent orders from Lebanon and Malta.