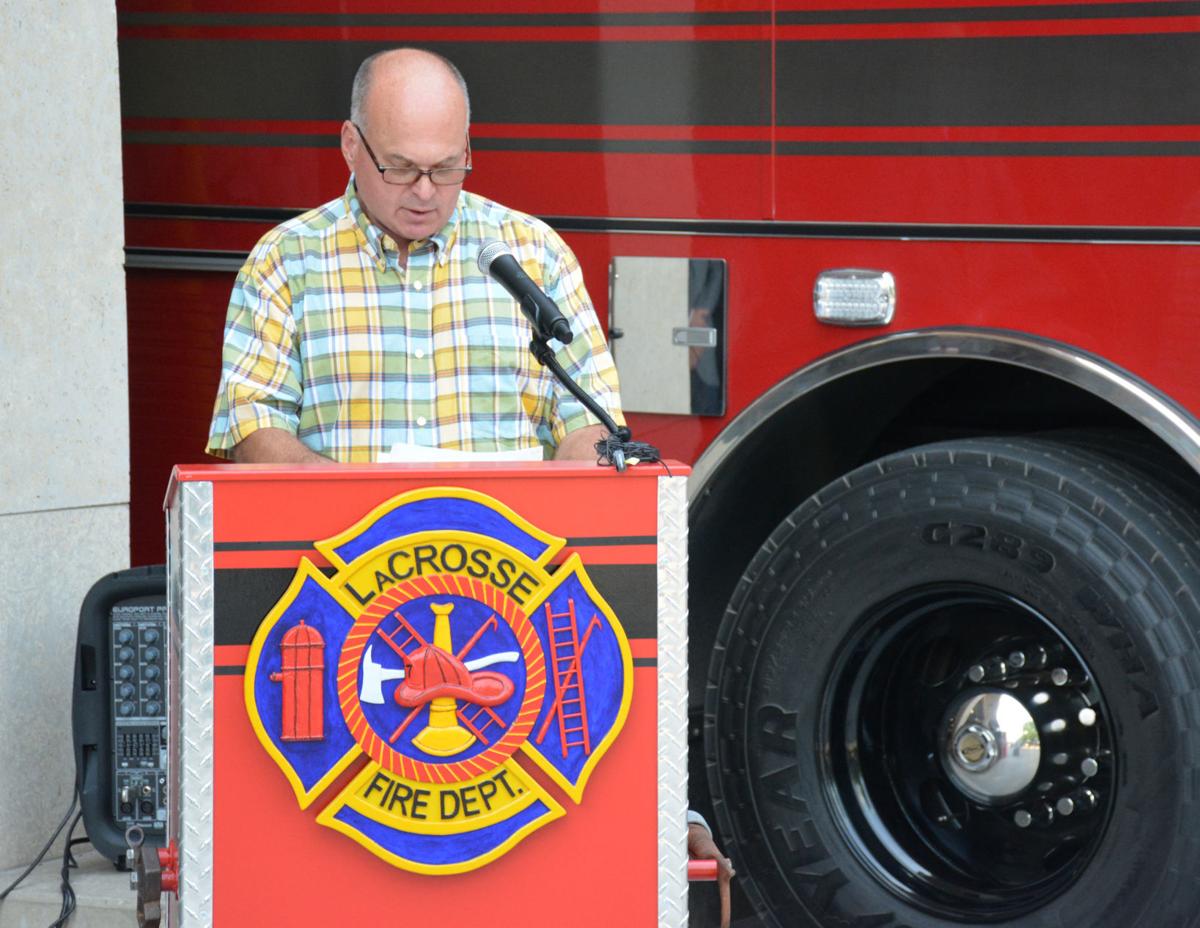 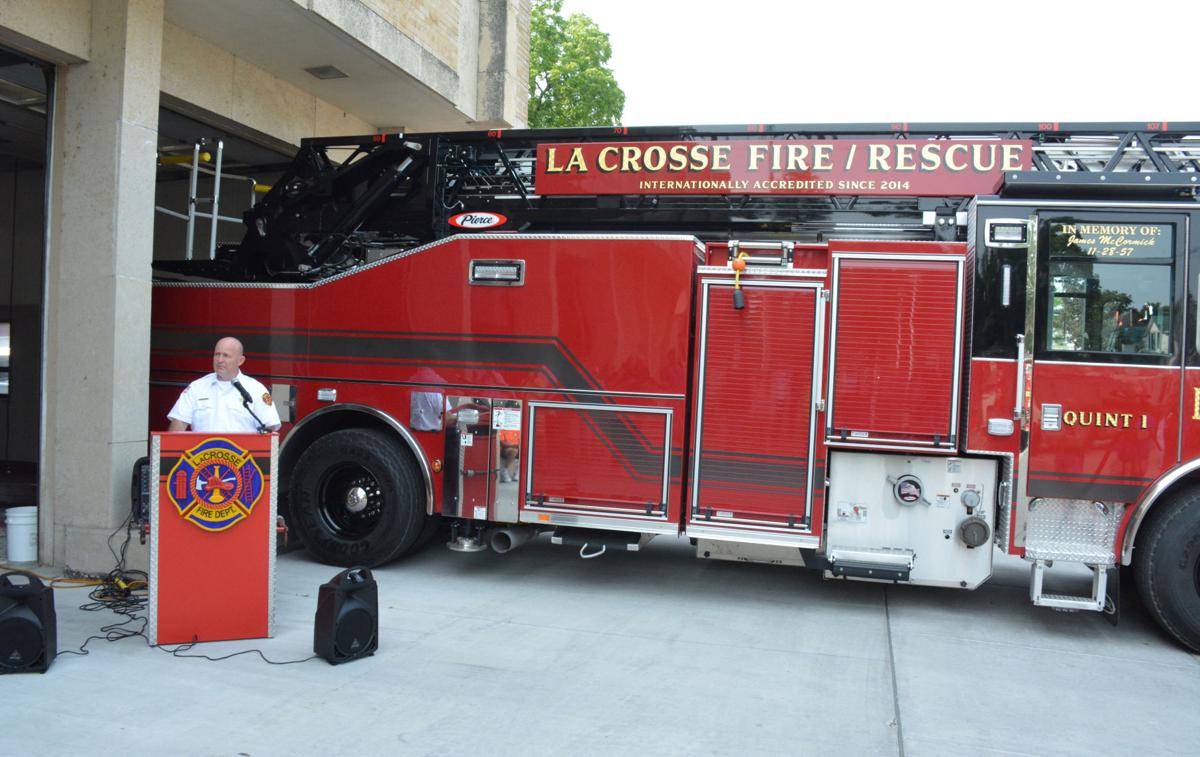 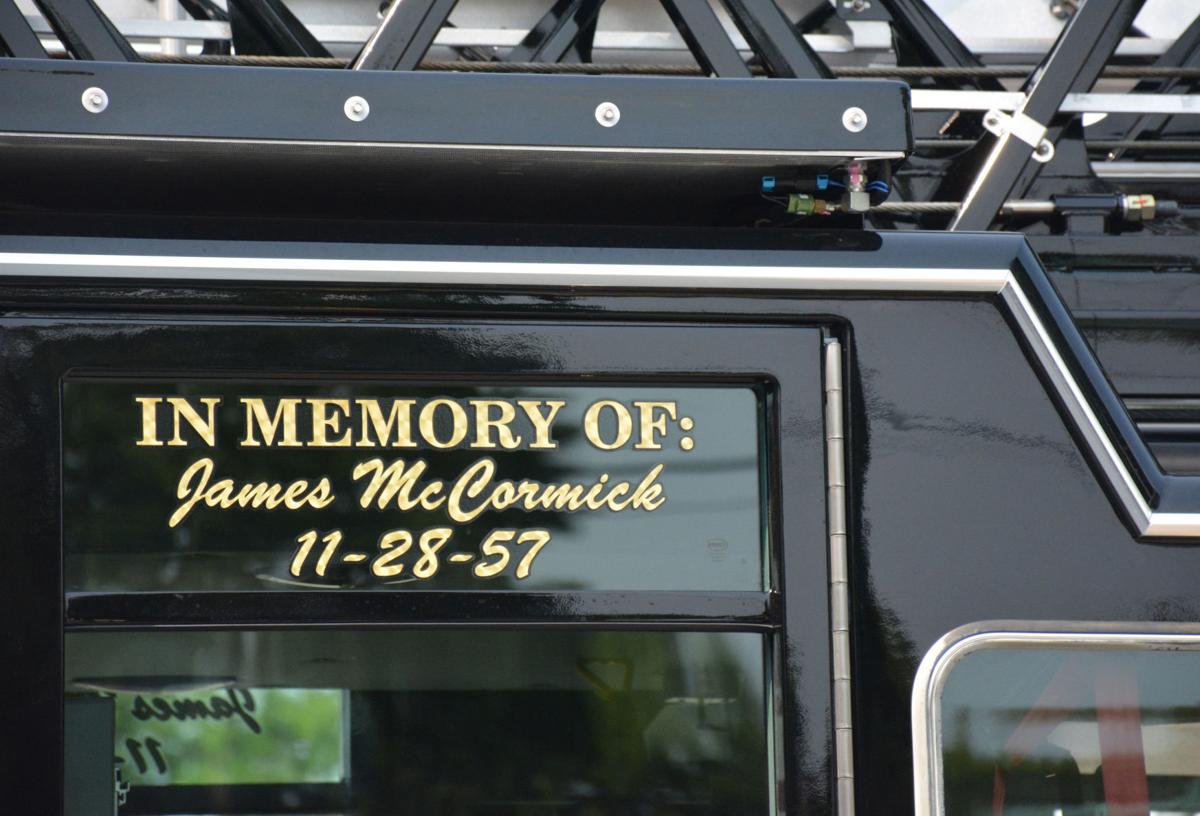 While most of La Crosse was asleep ahead of a long Thanksgiving weekend, James McCormick Sr. was performing his duty as a city of La Crosse firefighter engineer. He responded during the overnight hours of Nov. 28, 1957, to a Ferry Street address, where a blaze damaged a living room and a kitchen.

After the fire was extinguished, McCormick attached his smoke mask and began roof operations. Shortly thereafter, he experienced chest and stomach pains and was taken to St. Francis Hospital, where he died at age 46.

It’s been more than six decades since McCormick’s death, but the La Crosse Fire Department has never forgotten his service. On Tuesday, the department dedicated a new fire truck in his honor at the Fifth Avenue South fire station.

“We are so pleased to have our loved one honored in this way,” said Mike McCormick, James McCormick’s grandson. “It’s humbling, unexpected and exciting.”

The ceremony was interrupted by a loud crash that could be heard by everyone in attendance. It happened only a block away at the corner of Market Street and 6th St. South, where a two-vehicle collision resulted in one of the vehicles flipping over on its side. Fire and rescue personnel assisted at least one person from the vehicle, but nobody was seriously hurt.

When the ceremony resumed, assistant fire chief Jeff Murphy touted the features of the new truck, which was built in Wisconsin. He said the truck carries a 107-foot ladder, holds 500 gallons of water and operates on a single axle, which helps comply with weight restrictions.

Murphy said purchasing a fire truck is a complex task and that members of the department’s Fire Apparatus Committee have “become experts in buying fire trucks.”

Gilliam expects the truck to be in service for roughly 20 years.

“This memorial will be around for a couple of decades,” he said.

Another monument to McCormick is the 612 Ferry St. residence he helped save. Sixty-four years later, the building still stands.

“Our family’s wish for this shiny, red truck is that it plays an essential part in saving lives and providing aid for many years,” he said. “And it is our prayer that all firefighters be healthy and safe as they provide aid to those in need.”

‘We aren’t a bunch of lazy people’: Rejoining workforce isn’t easy for some who lost jobs to COVID-19