About 10 La Crosse residents, many of them college students, gathered to support the Green New Deal on Friday morning in the lobby of U.S. Rep. Ron Kind’s office in downtown La Crosse.

The deal, which was unveiled Thursday as a resolution in the House of Representative by two Democratic legislators, calls for the transition from fossil fuels to renewable energy within a decade and the creation of fair and equitable green energy jobs. A price tag has not been attached to the plan.

More than 600 groups across the country have petitioned their legislators in support of the deal.

“From 20,000 B.C. to now, life was always sustainable,” said Annika Mersmann of Viroqua, who organized the local petition. “Every species worked towards contributing to the balance. Now we’re the one going totally off balance, not even making a change when we know what we’re doing.”

Mersmann brought an XKCD cartoon charting global temperatures going back to 20,000 BC, printed across five sheets of 8-inch-by-14-inch paper, which she presented to Loren Kannenberg, Kind’s 3rd District director. The chart shows a gradual overall rise in temperature until the end of the 20th century, when temperatures veer sharply toward a one-degree increase above the global average.

International climate scientists reported in 2018 that global averages have risen by more than one degree and a concerted effort is needed to keep global temperatures below a catastrophic 1.5 degree increase.

“This generation and the past, we’re determining the path of this planet for all the species,” Mersmann said.

“I will carry your message to the congressman,” Kannenberg said, as Kind was in Washington, D.C., this week.

The Green New Deal is a framework that treats clean energy solutions to mitigate climate change as an economic opportunity. The name harkens back to government mobilization during the Great Depression.

The plan would build resilience against climate-related disasters, support sustainable farms and food systems, electrify the transportation sector, and provide universal health care. Exact details have not been worked out.

Unlike its predecessor, the Green New Deal would ensure that groups and communities excluded from the original New Deal, including indigenous communities, people of color, rural communities, women, children, the poor, the elderly, and people with disabilities, are not left behind, according to its text.

The deal grew from the Sunrise Movement, an organization of young people on a mission to “stop climate change and create millions of good jobs in the process.” It gained momentum after a newly elected Alexandria Ocasio-Cortez joined Sunrise supporters for a sit-in in then-House Minority Leader Nancy Pelosi’s office.

It stands in stark juxtaposition to President Donald Trump’s stance on energy. During the State of the Union address this week, Trump praised America’s dominance as the world’s top fossil fuel exporter and did not mention climate change, which he calls a hoax.

The next day, NASA and NOAA announced that 2018 was the fourth-warmest year on record, behind 2016, 2015, and 2017. Greenhouse gas emissions that fuel global warming rose sharply in 2018, by 3.4 percent, reversing a three-year downturn, according to the Rhodium group.

The plan, which is nonbinding, would face opposition in the Republican-controlled Senate and White House.

It leaves out some strategies for reducing greenhouse gases, including a carbon tax and cap-and-trade program, and has also has been critiqued for its ambitious timeline.

“I’m afraid I just cannot see how we could possibly go to zero carbon in a 10-year time frame,” former Energy Secretary Ernest Moniz told NPR on “All Things Considered.”

Many of those in La Crosse who came out to support the Green New Deal said they they did so because climate change is their present and future.

“We care because in 50 years, we’re still going to be here. We’re the ones that will have to deal with the repercussions,” said Marissa Despins, a senior at the University of Wisconsin-La Crosse majoring in biology. Despins kept an eye on the clock. Her next class for the day, on global warming, was at 11 a.m.

Erin Burke, also a UW-L senior majoring in biology, spent a summer in Alaska studying spruce bark beetles. She got a firsthand look at how climate change sped up the beetle’s reproductive cycle, allowing it to devastate forests at an unprecedented pace.

And climate change isn’t only something that happens elsewhere, like Alaska or along the coasts. “Even now, with the polar vortex, scientists are starting to link those changes to climate change,” Burke said.

“Because of climate change and our land use, there are way more floods with more water where the water just runs right off,” Despins added.

Avery Van Gaard, who works for Coulee Region Ecoscapes, a sustainable landscaping company, said the plan was not only crucial for averting the worst climate change impacts, but also a way to invest in renewable energy produced locally.

“There’s a whole industry, right?” Van Gaard said. “It’s excellent for the economy, so why wouldn’t you?”

“We have 10 years left to figure this out,” Van Gaard said. “I feel like we’ve got to the point where everyone else isn’t going to do anything about this; I have to do something about this.”

Study: Transition to renewable energy could create 162,000 jobs in Wisconsin

Moving away from fossil fuels could create thousands of jobs, improve public health, and increase overall economic activity by nearly $14 billion in Wisconsin, according to a new study. 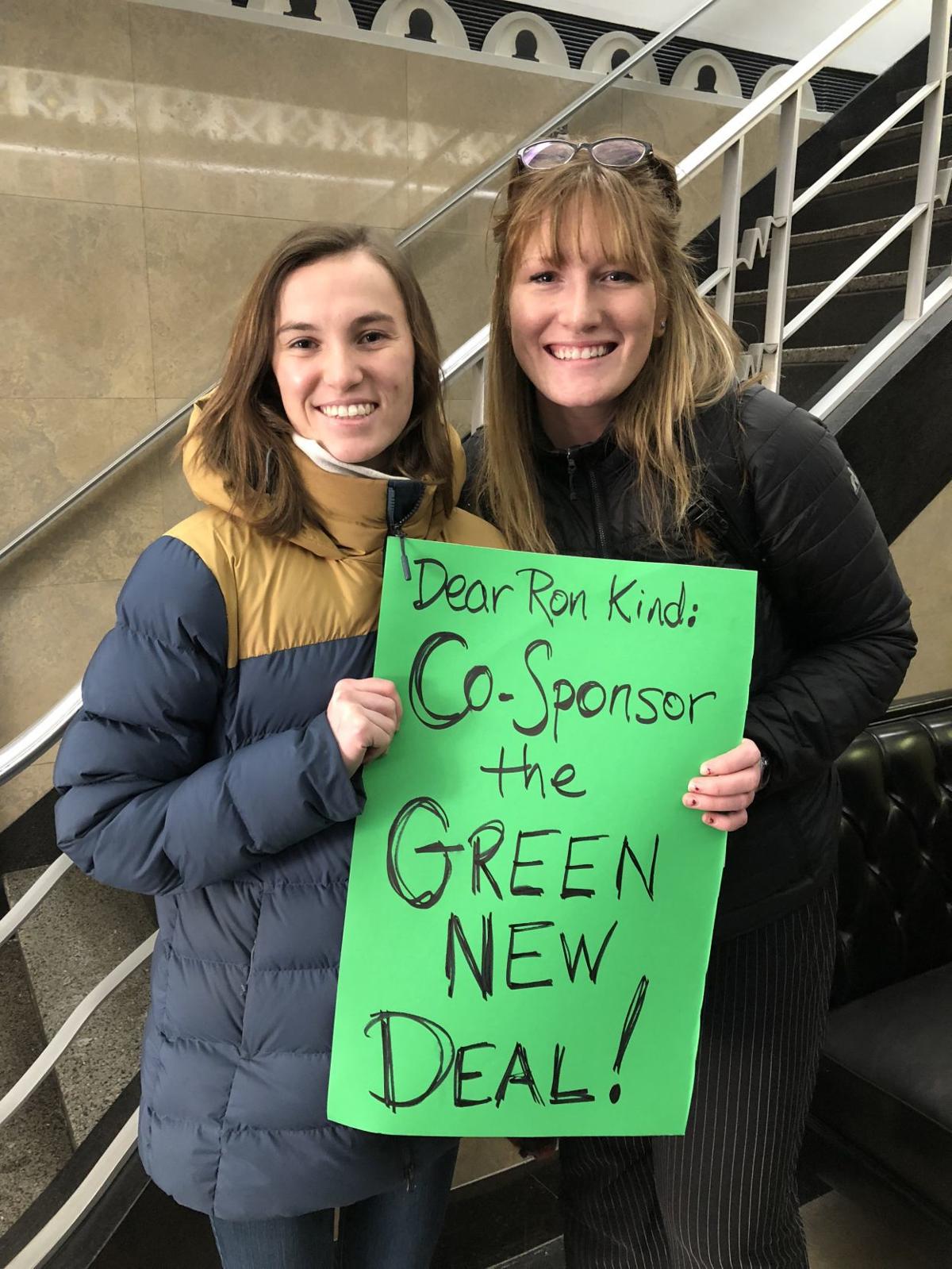 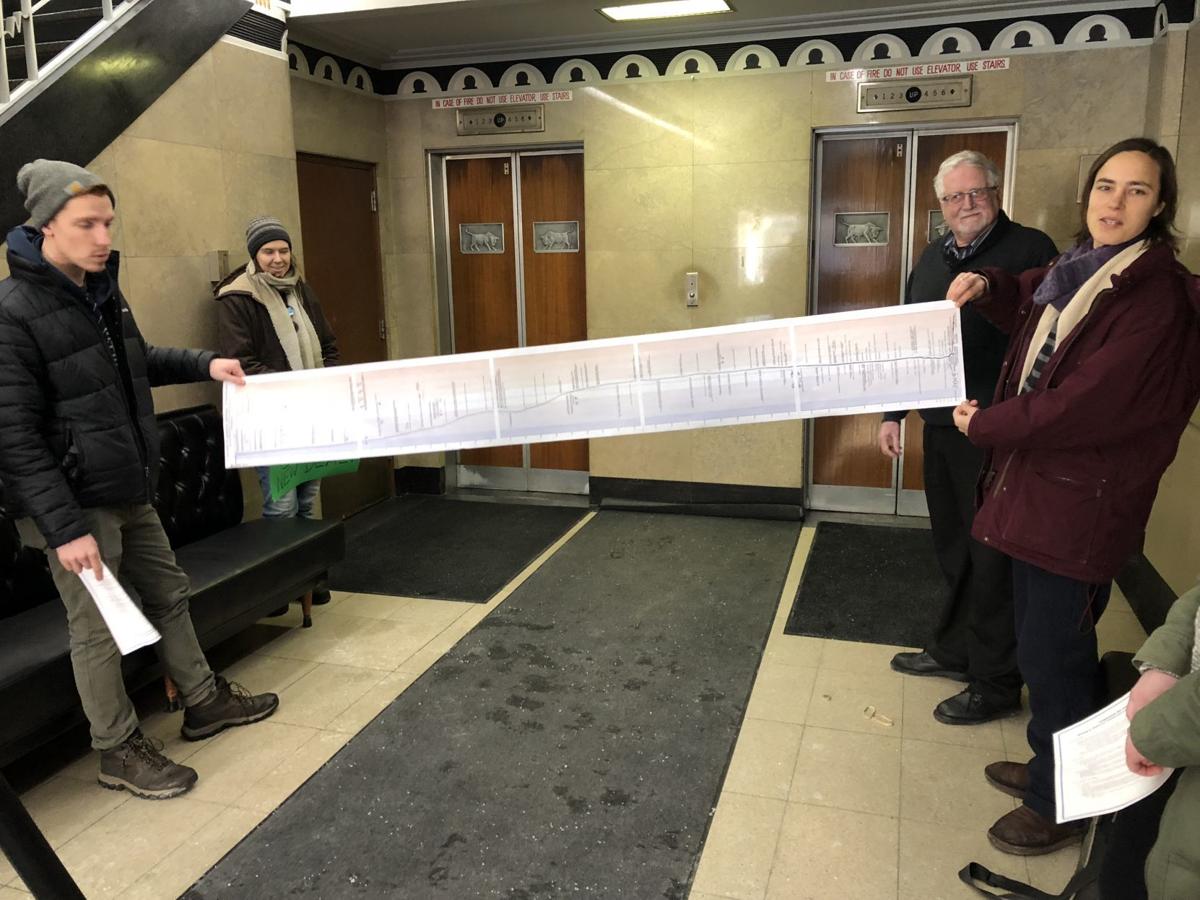 Annika Mersmann of Viroqua unfurls a timeline showing how global temperatures have risen since 20,000 BC.