Dan and Bonnie Felten, best known to members of the Coulee Region as Mr. and Mrs. Claus, have been delighting children nationwide for nearly two decades as Christmas' most famous and generous spouses.

So popular the jolly duo have become during their Downtown Mainstreet appearances the past three years, they were due for an upgrade in digs.

For December, the Feltens will take up residence Wednesdays through Saturdays, with a final appearance on Monday, Dec. 23, at their whimsical new Santa's Workshop at 506 Main St., open for chats with boys and girls both naughty and nice, listening to wish lists, grinning for photos and delighting kids and parents alike with tales of the North Pole.

While the original Santa and Mrs. Claus, and their productive posse of elves, have called the chilly North Pole home for centuries, the Feltens got their start under the Nevada sun, serving malls in Las Vegas and then Texas during the holiday season.

After moving to La Crosse, with its much more winter wonderland-esque temperatures and snowfall, the Feltens adopted their Santa and Mrs. Claus identities year round, their home — and daily ensembles — an ode to all things Christmas, spice and everything nice.

Since their debut as Downtown Mainstreet's jolly holiday ambassadors, the Feltens have quickly developed a reputation as the best Santa and Mrs. Claus incarnations around.

Lines to see the kind-faced and kind-hearted couple, quite genuinely the merriest married couple around, often wind around the corners. On opening day Sunday, Bonnie, 75, and Dan, 76, welcomed 75 visitors, including one family of 19 who all posed together for a photo.

Luckily, the Claus' spacious new setting is built to accommodate the slew of visitors, which will increase dramatically as the month progresses.

Provided by Phil and Julie Addis, the storefront boasts four times the square footage of their previous location in the Downtown Mainstreet Inc. office around the corner.

"They have been absolutely wonderful with helping us decorate letting us use this space," Dan said of the Addis family.

New additions to the bedecked abode include a mini-kitchen, stocked with wares from Bonnie's personal supply, a mock fireplace scene, snowmen "look throughs" for silly pics, a lounging alcove with a steady stream of holiday movies on TV and coloring tables. Fayze's is keeping the Claus' stocked with cookies to share with their visitors, and kids who come without a list can fill one out on site.

Head elf and granddaughter Carly Felten is back on duty, being joined for a week by the Felten's Colorado-based granddaughter Mackenzie Bicha, 22. Petite — she's a few inches shy of five feet — Mackenzie has both the spirit and slight stature to excel at the role, wearing her colorful tights and pointy ears with aplomb on Wednesday, her first day at Santa's Workshop.

"I've always wanted to be an elf," Mackenzie said. "To be a good elf you need to have an innocence about you, I think, and a happiness. Maybe its because I'm small like the kids, I see it from their perspective. I walked into (Santa's Workshop) and it was like 'Wow! Christmas!' You want to make it magical for them and it makes me so happy to see joy on kids' faces. Talking to kids brings you back to what life is all about — the creativity and the passion and the wonder."

Mackenzie recalls her first encounter with Santa two decades ago, when the toddler and her extended family heard stomping on the roof and looked up to see a costumed Dan walking across the kitchen skylight.

The whole family soon became Christmas devotees, with Dan and Bonnie's son Matt Felten having recently accepted the role of the Grinch, a character who is set to drop by Santa's Workshop on occasion this month.

The Feltens are fully committed to embodying the spirit of the season, calling their work a privilege and insisting they don't get worn out. The two even boast visual authenticity: Dan's bushy white whiskers are all real, his girth courtesy of cookies and milk, not padding, and Bonnie has the warm, rosy- cheeked visage of the Mrs. Claus of storybooks.

Their demeanor is similarly genuine, both with gentle-toned voices, friendly mannerisms and a gift for listening.

Whereas some Santas and Mrs. Claus' are there to take a photo and nothing more, the Feltens listen intently to each child's present requests — thus far slime and the Nintendo Switch top the want lists — Christmas-based queries and even their concerns.

Over the years, they have heard heartbreaking words from young visitors confiding neglect, and even women who share they are experiencing domestic violence.

The Feltens, who both have social work backgrounds, react with both compassion and responsibility, reassuring the despondent individuals they care, sharing resources with the adults and contacting authorities on behalf of the children if necessary.

They also make sure to talk to kids about bullying and the importance of befriending classmates who seem to be left out or picked on.

"We tell every child they are loved and we love them. It's amazing how some kids don't hear that and they react with tears and give us big hugs," Bonnie says.

The emotional impact and joy the Feltens share with their visitors, and the profoundness the interactions bring to them, have inspired others to adopt the brass buckles and crushed red velvet.

When Bill Hoglund retired as minister of First Congregational Church a few years ago, he determined his next calling was to be Santa, and the generous Feltens supplied him and his wife with attire and some advice.

Now living in Chicago, the Hoglunds are relishing their roles as Santa and Mrs. Claus, the Feltens say.

"It's the magic," Bonnie asserts.

Places of the past: Doerflinger's Department Store

The person, who is hospitalized with coronavirus, attended a funeral and ate at a restaurant earlier this month.

The employee worked at Trane's Plant 7 on Losey Boulevard, where around 250 other people work.

Earlier Tuesday, health officials said there have been 10 COVID-19 cases reported to the county.

La Crosse County is now up to 15 positive cases of COVID-19, the latest attributed to a woman in her early 50s. 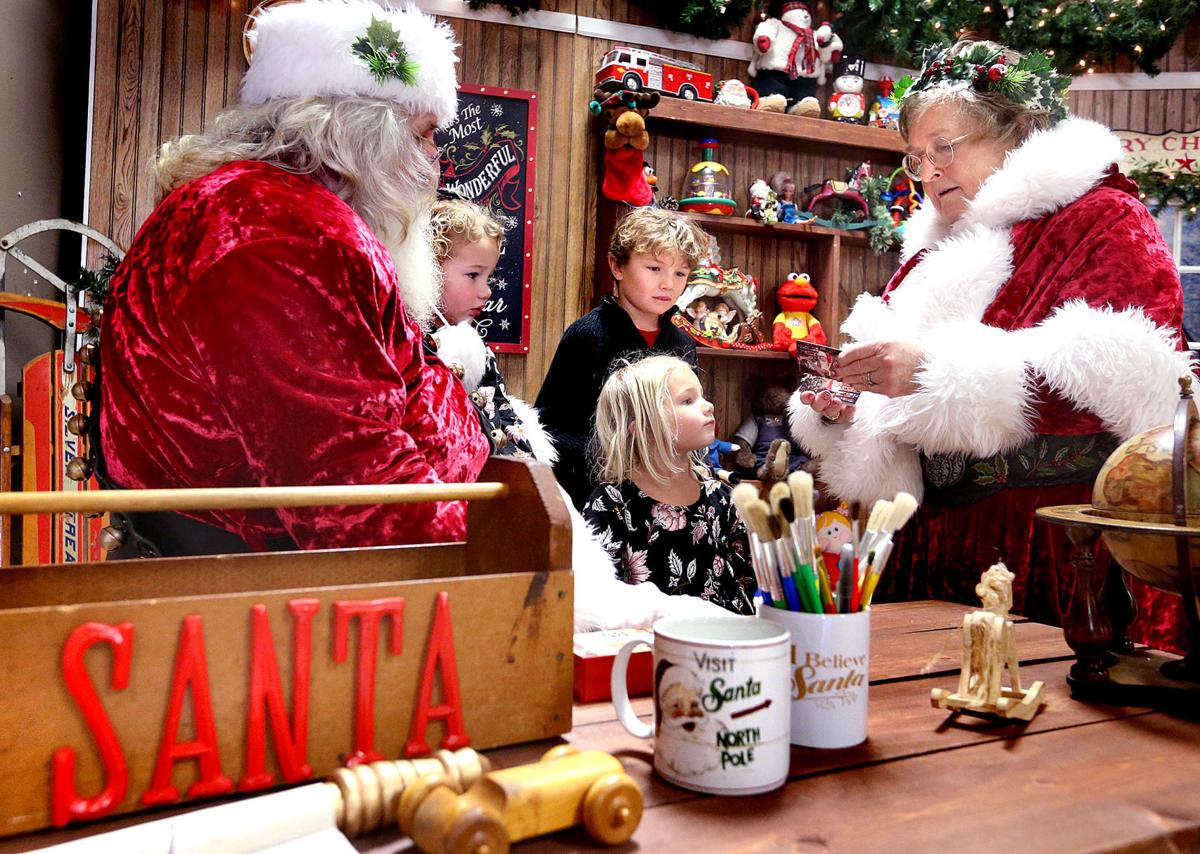 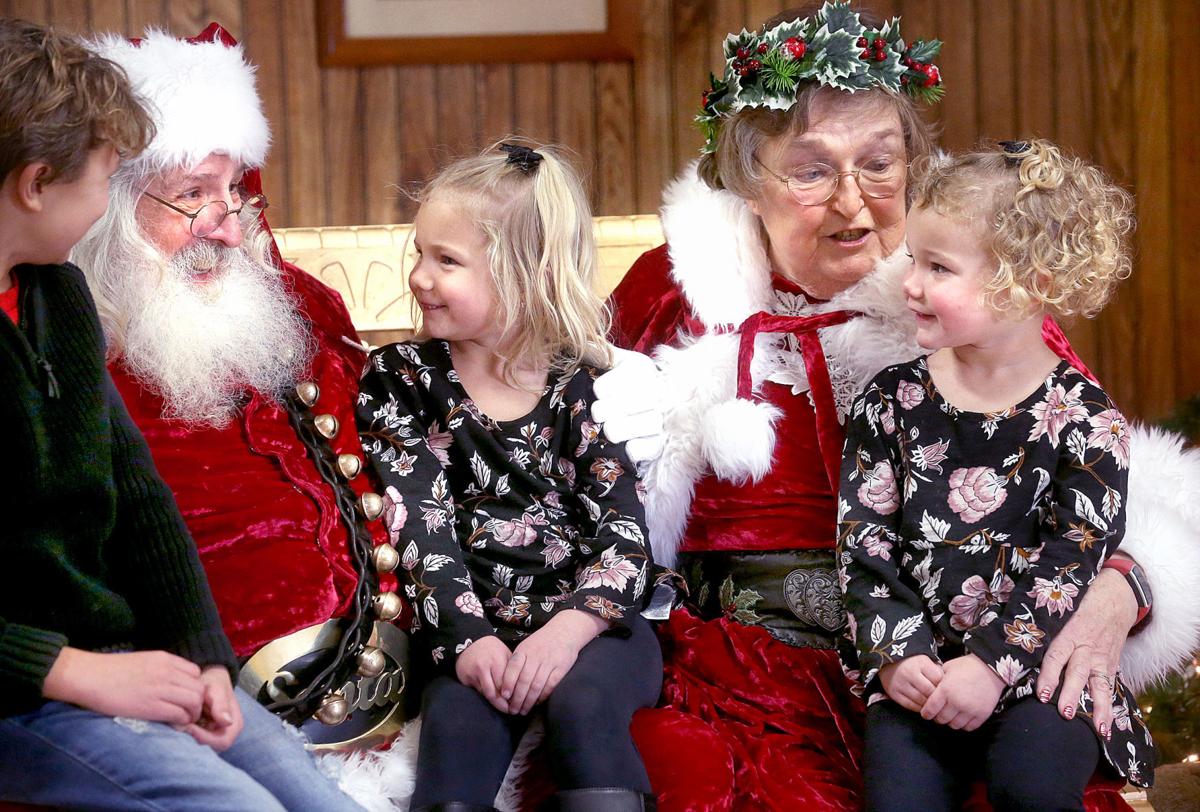 Children from the Schnick family of West Salem, William, 8, Lenora, 5, and Elizabeth, 3, visit with Santa and Mrs. Claus (Dan and Bonnie Felten of La Crosse) Wednesday at Santa’s new space at 506 Main St.