With formal approval from Wisconsin regulators, the utilities behind a high-voltage power line plan to begin negotiations with landowners along the route between Holmen and Dane County.

The Public Service Commission approved the proposed Badger-Coulee transmission project Thursday, formalizing a decision the panel made in March to permit the line at an estimated cost of $580 million, which will be passed on to electric consumers across the Midwest.

A joint venture of Xcel Energy and American Transmission Company, the 345-kilovolt line will originate at a substation under construction near Briggs Road that is part of CapX2020, another high-voltage transmission project running across Minnesota and western Wisconsin. Crews are at work raising towers along the $211 million portion of that project between Alma and Holmen, with work expected to be completed this summer.

The approved Badger-Coulee route runs north from Holmen to Black River Falls and then along the I-94 corridor to the outskirts of Madison. 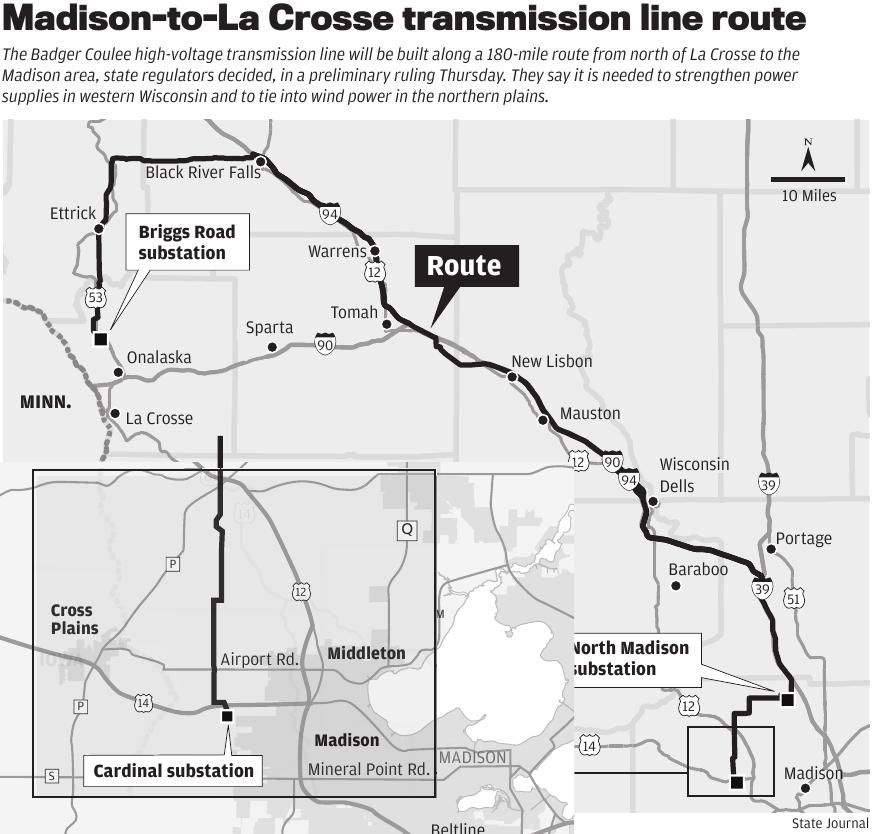 ATC and Xcel say the project will improve system reliability, deliver cheaper power and provide a pipeline for wind energy from Minnesota and Iowa to population centers to the east.

Opponents contend Wisconsin’s energy use is flat, and the line will allow utilities to profit by trading energy while discouraging more cost-effective local alternatives such as energy efficiency and solar power.

Deb Severson, a spokeswoman for the Citizens Energy Task Force, a grassroots group opposed to the project, said the PSC ignored information showing the line was unnecessary and instead cited reliability issues caused by the construction of CapX2020, which the commission approved as a stand-alone project in 2012.

“They’re changing their story blatantly, 180 degrees, depending on what best fits,” Severson said.

The PSC approved the project in part based on utility projections of increased demand, saying opponents failed to provide evidence that a zero-growth scenario is likely. But Severson pointed out that electricity use in Wisconsin is actually declining.

Total sales have fallen in each of the last three years, according to data from the U.S. Energy Information Administration.

"This line will lose us money unless Wisconsinites significantly increase our energy use," read a statement from the opposition group Save Our Unique Lands. "Most states are growing their energy efficiency and local power resources, not power lines."

Severson said opponents will challenge the decision but do not expect the PSC to reverse itself.

“They’ve never paid any attention to the facts we’ve presented in a manner that shows honest consideration,” she said.

It is possible to challenge the decision in court, but Severson said the cost could be $30,000, and supporters are growing tired of fighting.

Construction of the new line is not expected to begin until 2016, but ATC said it will begin acquiring easements along the route next month, working from south to north. Landowners in Dane, Columbia and Sauk counties are expected to receive information about the process and their rights.

An ATC spokeswoman said the company does not yet have a schedule for contacting residents in La Crosse, Jackson and Monroe counties but expects to contact all affected property owners by the end of the year.

Altogether, there are 318 residences, including 169 homes, within 300 feet of the approved route, which cuts through 617.5 acres of farmland.

Nearly 90 percent of those residences are along the northern portion of the route, through La Crosse, Trempealeau, Jackson, Monroe and Juneau counties. Almost half are in the Holmen area.

Utilities, like governments, have the power of eminent domain, which means they have the legal right to take ownership or cross private property. Landowners must be compensated for their loss but do not have the power to refuse.

Unlike Minnesota, Wisconsin residents do not have a “buy the farm” option that allows them to get out from under a power line by forcing the utility to buy the entire property.

MADISON — The Badger Coulee high-voltage transmission line will be built, and it will follow a route from a substation near Holmen to the Madi…