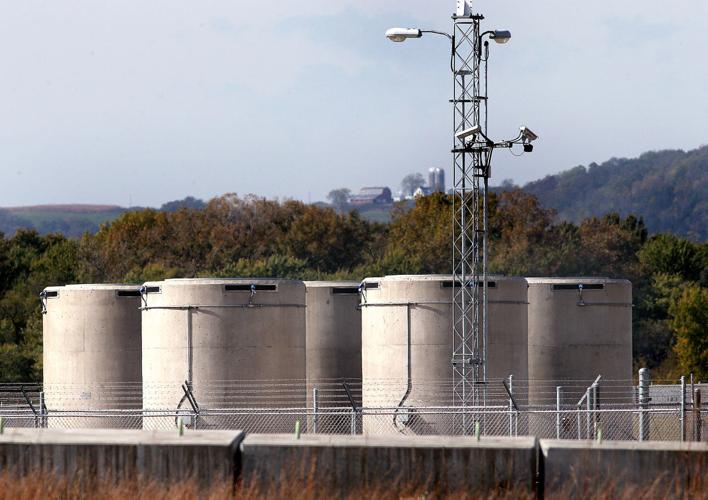 Canisters of spent nuclear fuel are seen Thursday behind barbed wire near Dairyland Power Cooperative’s plant at Genoa, Wis. The reactor was taken offline in 1987 and is expected to be fully de-commissioned in another five years. Republican lawmakers have introduced legislation that would end Wisconsin’s 32-year-old effective ban on the construction of new nuclear plants. 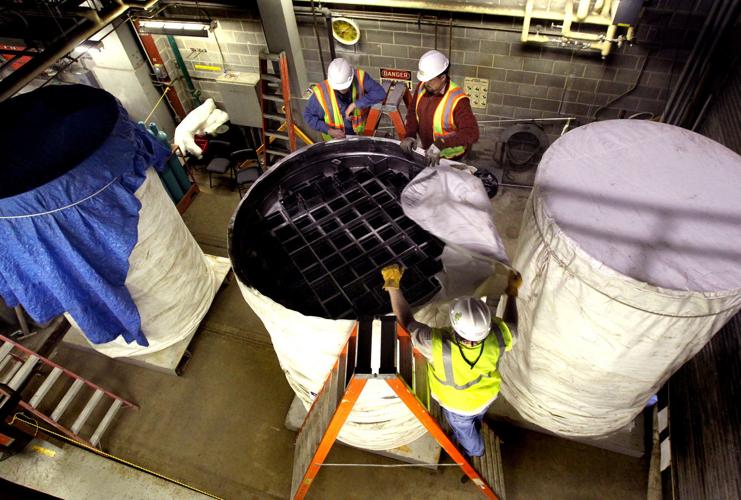 Republican lawmakers have introduced legislation that would end Wisconsin’s 32-year-old effective ban on the construction of new nuclear plants.

Companion bills sponsored by Sen. Frank Lasee of De Pere and Rep. Kevin Petersen of Waupaca would eliminate a 1983 requirement that the Public Service Commission not approve construction of a new nuclear plant unless there is a facility with sufficient capacity to receive the spent fuel from all nuclear plants in the state.

Because nuclear generators can provide on-demand base load power without greenhouse gases, nuclear will be an essential part of the nation’s energy portfolio as new federal regulations limit carbon emissions, said Bill Skewes, executive director of the Wisconsin Utilities Association.

“Everything really has to be on the table,” Skewes said. “If we’re going to find a way to comply.”

Similar legislation was introduced in 2005 and 2009 by then-Rep. Mike Huebsch of West Salem, but neither bill passed.

Skewes said he doesn’t know whether the current GOP-controlled Legislature will be more receptive, although he noted external factors have changed.

“This is one of those issues that is kind of all over the map,” he said. “It cuts across a lot of ideological lines.”

With the 2013 closure of the Kewaunee power station, Wisconsin has only one operational nuclear plant, the Point Beach generating station in Two Rivers.

The La Crosse Boiling Water Reactor in Genoa — the state’s first nuclear plant — was shut down in 1987 and is in the midst of a decommissioning process expected to take at least another five years.

In 2012, Dairyland Power Cooperative transferred the spent fuel rods into dry casks in the culmination of a $40 million, five-year project. Dairyland spends about $2 million a year to store the nearly 120,000 pounds of nuclear waste until the federal government makes good on a contract to transfer it to a permanent storage site.

With a capacity of just 50 megawatts, LACBWR was less than a tenth the size of Wisconsin's other nuclear plants and was considered too small to be cost-effective.

Dairyland spokeswoman Deb Mirasola said regardless of any changes to state law, the company has no plans for a new nuclear generator.

“Nuclear is not in our long-term resource plan,” she said. “Dairyland has made a conscientious effort to focus on renewable resources as we diversify.”

Wisconsin’s PSC has not received any applications to build a nuclear plant since Kewaunee went into operation in 1974, said PSC spokeswoman Elise Nelson.

The United States currently has 99 operational nuclear reactors at 61 plants, according to the Energy Information Administration. The newest came online in 1996.

The Nuclear Regulatory Commission voted in 2012 to approve four new reactors in Georgia and South Carolina, the first such approvals in more than 30 years. There were about 20 additional applications pending before the NRC last year.

Building a nuclear plant is a capital-intensive venture, Skewes said, but as the costs associated with other fuels rises, it could become more economical.

Whether any of the investor-owned utilities in the trade association would pursue a new nuclear plant, Skewes said the bill “is a first step that has to be taken before you can even have the conversation.”

Canisters of spent nuclear fuel are seen Thursday behind barbed wire near Dairyland Power Cooperative’s plant at Genoa, Wis. The reactor was taken offline in 1987 and is expected to be fully de-commissioned in another five years. Republican lawmakers have introduced legislation that would end Wisconsin’s 32-year-old effective ban on the construction of new nuclear plants.