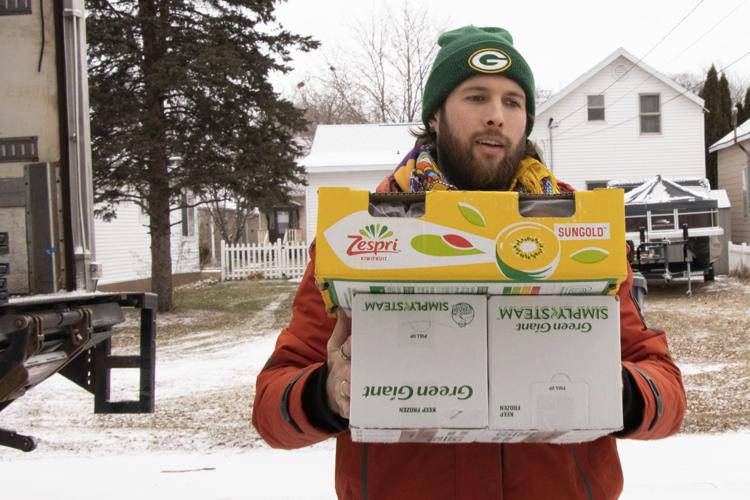 A former Viterbo basketball player, Alex Diciaula unloads food items for the Place of Grace pantry from the Hunger Task Force truck, which comes every Tuesday just before the pantry opens for visitors. 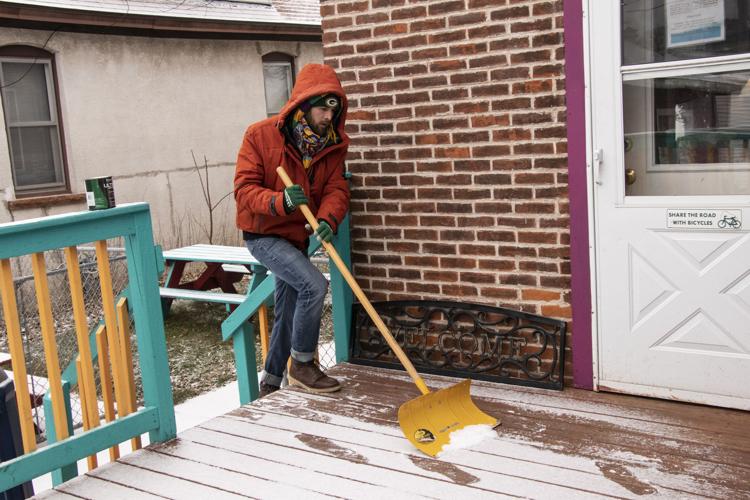 Place of Grace house coordinator Alex Diciaula, clears snow as he awaits the weekly delivery to the food pantry from Hunger Task Force. He completes work on his master’s degree in mental health counseling at Viterbo this semester. 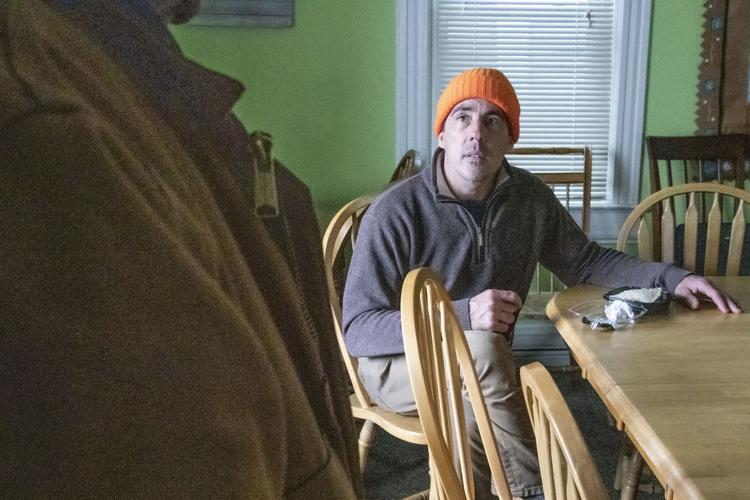 Former house coordinator Aaron Rasch, a graduate of Viterbo University’s Master of Arts in Servant Leadership program, has stayed involved at Place of Grace since moving out, largely because he wants to stay connected with the people he’d gotten to know during his two years living there.

Randy Erickson For the Tribune

It’s just after 11:30 on a Tuesday morning as the empty Hunger Task Force delivery truck pulls away from the two-car garage that houses the Place of Grace food pantry. The pantry opens at noon, and getting the weekly drop-off in place on the shelves before opening seems daunting.

It should be stressful, but house coordinators Alex Diciaula, Aaron Rasch and Nick Herlitzka radiate calm and inner peace as they quickly tame the chaos, ready with time to spare. Familiar visitors straggle in and are greeted warmly. In the pantry, guests can take whatever they need or want, no questions asked. They aren’t customers. They aren’t recipients of service or charity. They are dear friends.

That’s called “radical hospitality,” and it’s the heart that beats in Place of Grace. “Our basic philosophy, our mandate, if you will, is treat each person who comes through the doors as if they were Christ Himself,” said Tom Thibodeau, a longtime Viterbo University faculty member and founder of Place of Grace and the university’s servant leadership studies program. “You want to change the nature of what’s happening in this country, in our world? Treat each person as if they were Christ himself, as if they had God-given dignity as their birthright and honor that. That changes everything.”

Place of Grace is four blocks south of Viterbo on Hood Street, but with all the connections to the university, it could be considered an integral part of the Viterbo experience. Hospitality is one of the institution’s five core Franciscan values, and countless students have served there over the years.

Thibodeau is Viterbo’s strongest and longest connection to Place of Grace, which began 25 years ago. Back then, Thibodeau already had been teaching a homelessness class at Viterbo for years, and he would take his students to a Catholic Worker house in Omaha, Nebraska. They stayed at the house and served meals to 300 to 400 people per day, gaining insights on radical hospitality espoused by Dorothy Day, a social activist and co-founder/editor of the Catholic Worker newspaper who is credited with founding the Catholic Worker Movement in the 1930s.

La Crosse needed a house of hospitality like the one in Omaha, Thibodeau believed, and one day walking from Viterbo to the nearby Walgreen’s he passed the now-gone house of Sister Grace Clare Beznouz, FSPA, the driving force behind Viterbo’s nursing school. Thibodeau thought it would be a good site for a hospitality house and he knew just what to call it: Place of Grace, in honor of Beznouz. That location didn’t work out, but the name stuck.

In the summer of 1996, Thibodeau shared his Place of Grace idea with his students. “I always think it’s important to speak your hopes out loud, so that people hold you accountable. And they also come to your aid,” he said.

And the aid did come. The two summer classes he was teaching each spontaneously raised $350. With $700 in hand, Thibodeau and his friend Joe Kruse, an administrator at what was then St. Francis Hospital, invited a group to meet at 7 a.m. at the hospital bakery. “It’s always good to gather at an inconvenient time, because the people who are most committed are going to show up, and 11 of the 12 people that we asked to come, came,” he said.

The search for a suitable house ended, poetically, on Christmas Eve 1996, when a vacant two-story brick house at 919 Hood St., which had been a home for recently released female inmates, was suggested.

On Jan. 1, 1997, Place of Grace opened its doors with Michelle “Mickey” Collins and Marilyn Pedretti as the first live-in house coordinators. Pedretti, a sophomore Viterbo ministry major in her mid-30s who was part of the Place of Grace organizing committee, had spent two years in a Catholic Worker house in Kansas City where they fed 200 to 300 people per night, six nights a week.

The volume of guests and the level of hardship was different at Place of Grace, but the approach was basically the same. For house coordinators, Pedretti said, “serving and simple living was the key. You shouldn’t be able to tell any difference between the guests and those who live and volunteer at Place of Grace.”

For the first weekly meal at Place of Grace, there were 20 volunteers and eight guests. Word started spreading and the next week there were 20 guests, and the week after 40 people came. Over the years as many as 200 meals have come out of the Place of Grace kitchen on a communal meal night, and countless people in the neighborhood have gotten through hard times with visits to the food pantry.

Place of Grace, of course, isn’t just about food. Guests might find a coat there to get through the winter. They might stop by to do laundry. Neighborhood kids can come romp on the nautical play structure in the backyard. People come over for a cup of coffee and a talk. Many have come for the Monday morning prayer and contemplation group, and the house has seen the joy of wedding celebrations and the sorrow of memorials for friends lost. The common thread is a sense of community.

Almost all the house coordinators over the years have had Viterbo connections. If they haven’t been a student or graduate, they’ve found their way to Place of Grace through Viterbo. Before it had been open a year, Place of Grace was incorporated into the curriculum of a Viterbo class, and countless Viterbo students have given of their time as volunteers there.

Current house coordinator Alex Diciaula graduated from Viterbo in 2015 with a bachelor’s degree in sociology. He was working at Chileda when he decided to return to Viterbo for graduate studies in mental health counseling.

As a Viterbo basketball player, Diciaula had been inspired by Thibodeau, who was the team’s chaplain, but it was Aaron Rasch, a graduate of Viterbo’s Master of Arts in Servant Leadership program and house coordinator at the time, who connected Diciaula with Place of Grace. When the pandemic forced Diciaula to close his yoga studio, he came to the Place of Grace pantry, where Rasch, one of Diciaula’s yoga students, suggested he’d be a great fit for the house coordinator role.

“It was really just a perfect opportunity,” said Diciaula, who completes his master’s degree work this semester.

Place of Grace still hosts weekly meals, but they only have 10 diners at most because of the pandemic. Most of the food prepared for the weekly meal during the pandemic has been delivered to people experiencing homelessness, at Cameron Park, then Houska Park and now, with the weather turning cold, to the shelters that provide refuge in the winter.

Thibodeau, Pedretti, Rasch and Diciaula all say Place of Grace’s main mission isn’t feeding people or somehow fixing them. “It’s about building connections, direct connections, not providing services,” Rasch said. “What appeals to me about Place of Grace is it puts you closer to people. There’s a drawback to having a hard line of defense in dealing with social problems, a separation from people. I came in here frazzled, stressed, treating my work as a burden. Now, I show up and be present. That’s vital. We have to meet people where they are.”

WHAT: Place of Grace, a house of hospitality at 919 Hood St.

“You want to change the nature of what’s happening in this country, in our world? Treat each person as if they were Christ himself, as if they had God-given dignity as their birthright and honor that. That changes everything.”

A 34-year-old Onalaska man has been convicted in La Crosse County Circuit Court of sexual assault.

A high-speed on Interstate 94 ended Wednesday when a vehicle entered a ditch and struck a tree near the Jackson-Trempealeau county line.

A former Viterbo basketball player, Alex Diciaula unloads food items for the Place of Grace pantry from the Hunger Task Force truck, which comes every Tuesday just before the pantry opens for visitors.

Place of Grace house coordinator Alex Diciaula, clears snow as he awaits the weekly delivery to the food pantry from Hunger Task Force. He completes work on his master’s degree in mental health counseling at Viterbo this semester.

Former house coordinator Aaron Rasch, a graduate of Viterbo University’s Master of Arts in Servant Leadership program, has stayed involved at Place of Grace since moving out, largely because he wants to stay connected with the people he’d gotten to know during his two years living there. 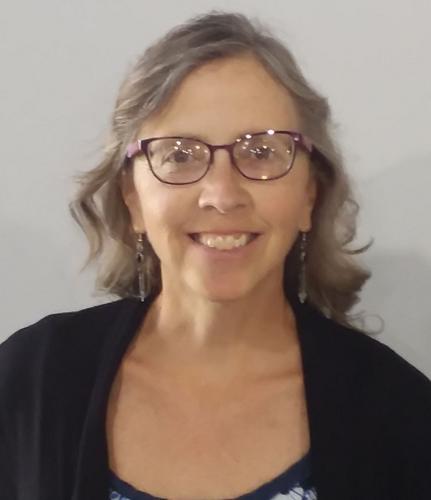 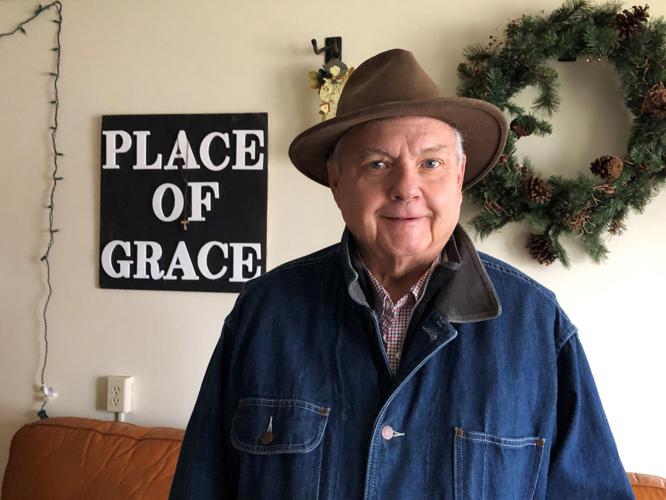