“Anyone interested in playing eighth-grade basketball should meet in the gym after school.”

Andrea Hansen heard the news over the loudspeaker of her middle school classroom. It was winter of 1972. Title IX, the revolutionary civil rights law that prohibited sex-based discrimination in schools, hadn’t yet passed. But the historic moment was coming that June.

“I want to play basketball,” Hansen had told some girlfriends. “Why don’t we go to the meeting?”

None of the girls had played before. Still they wanted to try.

When 3 p.m. rolled around, the group of eight gathered just outside the gym doors. Two male coaches were inside the gym facing the future boys’ basketball team on the bleachers.

Her heart pounded wildly. “Should we do this?” she wondered.

It was a moment where she could raise her voice and take a stand.

Today Hansen reflects on a lifetime devoted to issues of justice and community. She has been to state capitol buildings to talk to legislators about anti-violence and gender justice, sat in on rural county board meetings to protest new sand mines, marched Sparta, Wisconsin streets for immigrant rights, and rallied along Hennepin Avenue in Minneapolis in 1979 to “Take Back the Night” for those who fear sexual assault.

From anti-racism to economic justice, aging and care work to the climate crisis, Hansen has a way of stepping up in solidarity with people who have been historically excluded and marginalized.

“Andrea is a champion of racial, gender, and economic justice in the La Crosse Area,” says Jodi Vandenberg-Daves, chair of UW-L’s Race, Gender and Sexuality Studies Department. “In all her work, she is a visionary idea generator, as well as a servant leader who rolls up her sleeves and gets the work done, with humility, kindness and a continuous willingness to both learn from and mentor others.”

Hansen’s drive came from her mother and father, children of immigrants who built their life around serving others. Her father was a Lutheran pastor, and her mother was a parish worker. As she grew up, the family moved to rural communities across Canada and the Midwest, where her dad served small congregations.

She recalls evenings when she needed to give her father privacy in the family living room as he provided support to a struggling married couple or a parent struggling with the death of a child. She loved taking part in the youth groups and especially the cooperative games that were part of the 1960s and ’70s that emphasized cooperation rather than competition. While the family never settled long in any one place, the sense of community Hansen experienced and prized as a child was formative. “I was socialized to think of yourself as part of the whole,” she says.

After college, Hansen spent decades working for nonprofit organizations. She remembers gathering people to talk to legislators and make demands surrounding issues of domestic violence and sexual assault, whether getting funding for needed programs, advocating for new laws or challenging proposed legislation.

But she admits that even today walking through those big, wooden state capitol doors to speak gives her some of that same trepidation she felt as an eighth grader.

In basketball season of 1972, Hansen knew she had a right to be in that gym with the boys. She remembers when the group of girls decided it was time to “shift into gear.”

“We thought, ‘We got here. Let’s see what happens,’” recalls Hansen.

They walked into the gym and took seats on the edge of the bleachers. Everyone looked up, noticing the group, and the coaches took a moment to talk discreetly amongst themselves before continuing to address the boys.

“We were not supposed to be there, and they knew it and we knew it. Yet there we were,” says Hansen. “We had violated a space that was assumed to be boys only.”

No one looked at the girls for the remainder of the session. At the end, the coaches passed a sign-up sheet around for those who were interested. It never came in the girls’ direction.

As an adult, Hansen has found sustainable ways to make change by weaving social justice into her professional work.

When she worked for UW-L’s Continuing Education and Extension (now Extended Learning), she secured grants to help lift-up the long-term care workforce — a field that is female-dominated, fast-growing and in-demand, but largely underpaid and overworked.

“I wanted to make sure that people involved in that work would be able to come and take part in some of these affirming programs we were offering through Continuing Education and Extension.”

She also earned UW Extension grants for a workshop series on workforce diversity and inclusion that aimed to build on the strengths and assets with the area’s changing demographics. The advisory group did not want to disband after the grants ended, so, with lead sponsors and memberships, The Greater La Crosse Diversity Council was born. Hansen continued on with the group, serving on the GLADC board of directors as the organization’s treasurer for many years. That council still exists today with the mission of strengthening the workplaces and communities of the area by promoting and cultivating diversity, access, inclusion and equity through collaborative projects and programs.

“The paid work we do can be done in ways that liberate, connect, and have integrity,” says Hansen.

Today Hansen meets regularly with students in the Self Sufficiency Program (SSP). She directs the UW-L program designed to improve access to higher education for single parents and other adults.

Melissa Touche found SSP as a busy mother of three. Her eldest child had been diagnosed with Type 1 diabetes and her brother with paranoid schizophrenia. She was also donating her hair to her mother.

She turned to the SSP program as it had always been a dream to go back to school and earn her bachelor’s degree. There she met a woman who created a sense of hope that her college dream could still happen.

“Andrea is the queen of support and encouragement,” says Touche. “Many times, I felt unsure of myself as an older, non-traditional student. There were times I felt like giving up and, in her true Andrea way, she convinced me to stay, by making me think it was all my idea.”

Hansen became “absolute instrument to my success,” says Touche. Touch completed the SSP program, graduated from UW-L in 2020 and is now working as an independent living skill and certified peer specialist for the nonprofit Independent Living Resources. She helps others through the same crises she has faced as a single parent.

Hansen says the students of SSP inspire her. They show that higher education is not just an enterprise for the few. Instead, everyone deserves a space.

It has echoes of sitting down on the bleachers back in eighth grade.

Hansen recalls that after that eighth-grade basketball meeting, one coach approached the group of girls, “You know we don’t have a girls basketball team, don’t you?” he said.

The girls nodded. While nothing changed on that day, Hansen remembers telling her mom about the action she organized in school. Her mother encouraged her to take another step. So that evening, Hansen wrote a letter to the state secretary of education about wanting a basketball team for girls at her school. A personal response from Secretary John Pittenger assured her change was coming.

By ninth grade, the Big Spring School District had a girls basketball team.

“If you disrupt the usual ways of thinking and acting, it creates space for some new things to happen,” says Hansen. “That feeling of opening space never leaves you.”

The feeling didn’t leave Hansen when she walked through the capitol building doors as a nonprofit leader. And it didn’t leave her when she became director of the SSP program.

As more doors open, new energies begin to take hold, she notes. She sees this happening with her SSP students every day.

“If you can keep that flame alive, it is amazing and beautiful,” says Hansen. 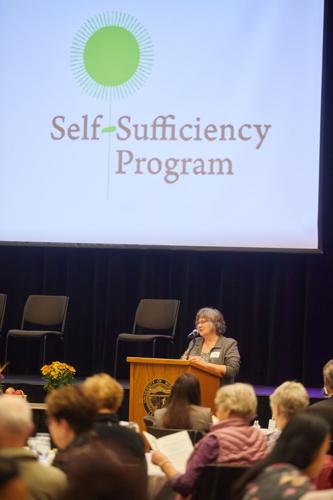 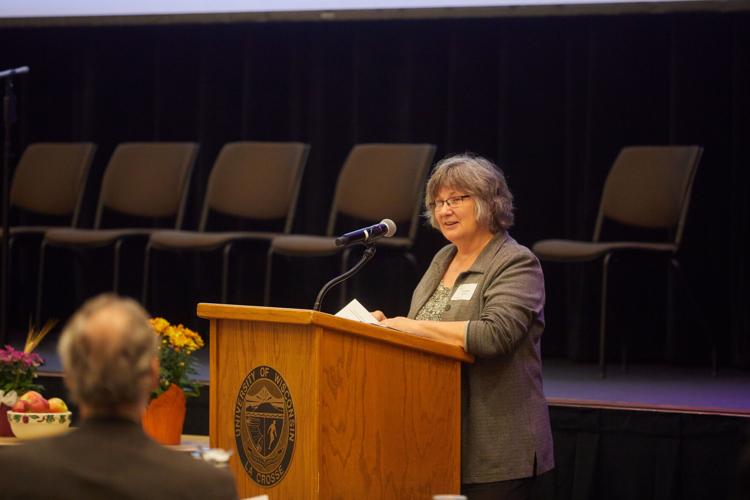