One dies in crash with dump truck in Trempealeau County

Mayor Tim Kabat Monday vetoed the concept for the $49.2 million La Crosse Center expansion, calling it a “big, flat, plain box” that does not honor the city’s history.

The La Crosse Common Council voted 7-4 last week to approve the concept that extends into Riverside Park and an additional $7.2 million in funding for the project, which would cover about half an acre of the park’s 20 total acres, hanging 27 feet in the air above Front Street. With the mayor’s veto, the question will go back to the council July 12, where those in favor will need a super-majority of nine votes to move forward.

The mayor objected to the impact on the park and the additional spending.

“I don’t take the idea of eliminating park space very lightly. I don’t think B1 is the absolutely only option. I think those other studies show there is space to expand,” Kabat said in an interview.

He was especially opposed to encroaching on Riverside Park, which he called “the region’s most loved park.” Kabat believes the city should honor John Nolen’s 1911 park plan.

In his message to the La Crosse Common Council informing members of his veto, he criticized the concept, saying “the current design lacks inspiration and detracts from the aesthetics at one of the most beautiful and historic sites anywhere on the Mississippi River.”

What should be the next step for the La Crosse Center?

The mayor also criticized what he deemed the “common council’s lack of fiscal discipline” in his letter to the council.

“We’ve come too far as an organization with strong financial management. This request for more money will create negative circumstances for city operations. Additional borrowing will negatively impact street repairs and future fire stations,” he wrote.

The city previously approved $35 million in borrowing for the project and another $7 million will be covered by the combination of a $5 million Wisconsin state grant, room taxes and reserve funds.

He called the legislation “fatally flawed” in that it didn’t include enough details about the cost of working in the park, including shifting an electrical transmission line, addressing floodplain issues and addressing the space that would be left underneath the overhang.

“I believe that there’s an ability to put together some general cost estimates for what that’s going to include,” Kabat said.

He added that he would rather see a design that stays out of the park to avoid those costs entirely.

“The concept that avoids the park avoids the need to ask those questions, because we won’t need to relocate the transmission line or deal with the floodway,” he said.

Council member Jessica Olson, who voted in favor of the project, said Monday she was disappointed in the mayor’s veto.

“I hope that in the ensuing months that the La Crosse Center Board can reach out to the council members and convey the information they are looking for as they reach their decision,” Olson said.

While she hadn’t yet fully reviewed the mayor’s letter, she did say, “I have very, very grave concerns about the viability of the alternatives.”

La Crosse Center Board chair Brent Smith understood where the mayor and others are coming from when they object to using park land, Smith said, but he disagreed, saying he believes having easy access to and from the center in the park would benefit both the the center and the park.

Smith said he could see critics’ point when it came to the initial drawing, in which a white box marked the location of the expansion.

“That was never meant to be the final version, and I think the most recent attempts to show what it might to look like I would not put in the same category,” Smith said.

Even the latest drawings were meant to show an option, not a final product, he added.

Smith agreed with the mayor that the space at Second and Pearl streets should be put to better use, saying the concept included lobby space on that side for that purpose.

“The first impression when someone comes in or drives by, I think we wanted to improve that as well,” he said.

Should the veto be upheld, the board will go back to the architects and try to find another concept that fits with the La Crosse Center’s needs and space constraints.

“We don’t see an alternative right now — not to say there couldn’t be,” Smith said.

The mayor emphasized that his criticism of the proposal shouldn’t be misconstrued as a lack of support for expanding the city’s convention center.

“I really believe that it’s critical to downtown and the larger region to boosting tourism and really taking advantage of what’s going on in our community. I just don’t think there’s need to expand into the park,” Kabat said. 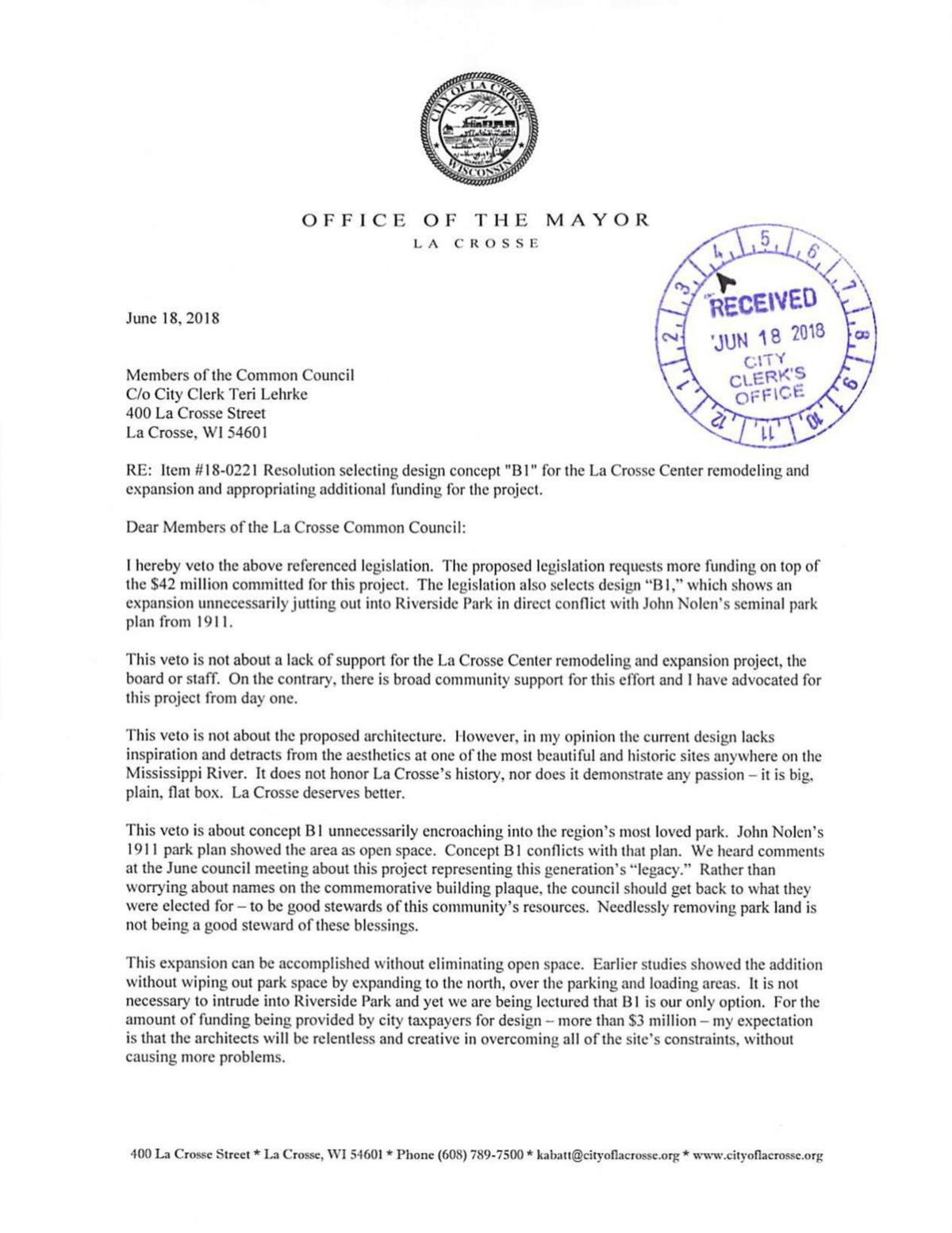 The La Crosse Center Board will meet Thursday morning to weigh questions about its proposed $49.2 million renovation and expansion. 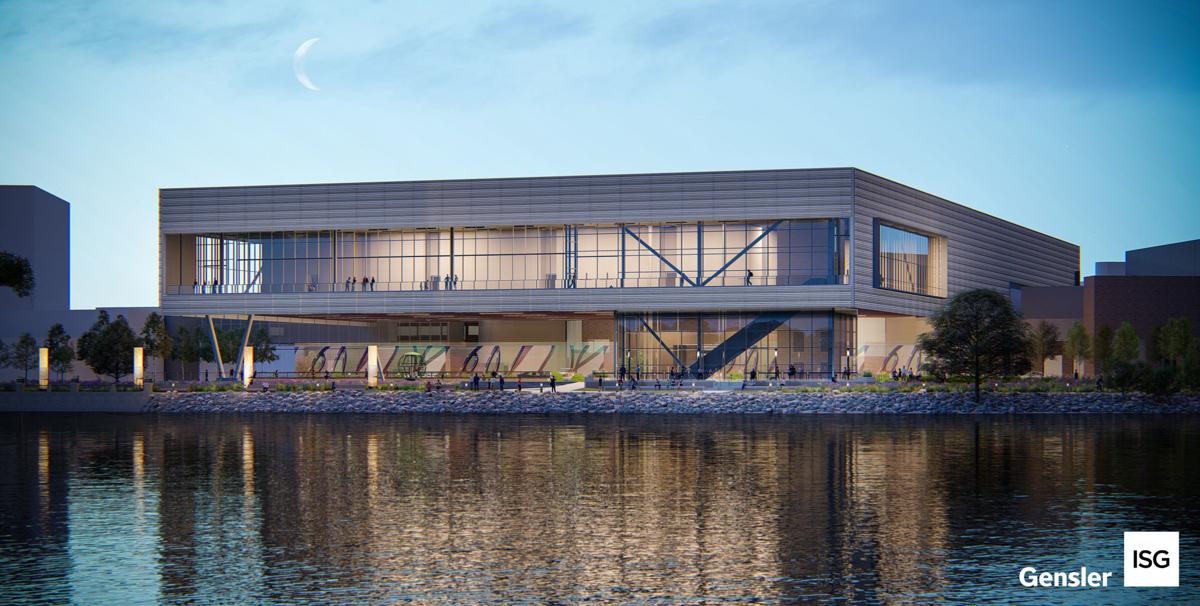 This architect's rendering shows an approximation of what the La Crosse Center expansion and renovation will look like from across the Mississippi River at Pettibone Park. The materials for the renovation haven't been chosen yet, so the appearance could change during the design phase.