Watch live: NASA's DART mission will slam into an asteroid's moon this evening 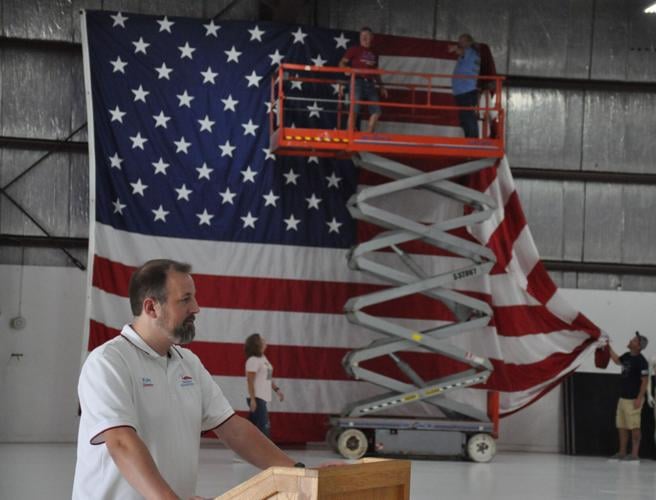 Freedom Honor Flight director Ryan Clark speaks to the media as volunteers mount a flag to welcome the 100 veterans who will fly Saturday to Washington, D.C.

Snacks are organized for participants in Saturday's Freedom Honor Flight.

It’s getting more expensive these days to fly an airplane, and nobody knows that better than the organizers of Freedom Honor Flight.

“When we took that first flight in 2008, it cost $53,000 for the aircraft,” Freedom Honor Flight director Ryan Clark said. “Obviously flight costs have gone up since then, and this flight is going to cost $113,000 for the aircraft alone. There’s also a fuel surcharge on top of that.”

Despite escalating costs, the next flight will take off as scheduled. Thanks to what Clark described as “incredible support from the communities that we serve,” the 27th Freedom Honor Flight will depart from La Crosse Regional Airport at 7 a.m. Saturday.

Clark spoke to reporters as volunteers were preparing for veterans to arrive at a Colgan Air hangar. Volunteers put up flags, set up tables and arranged snacks and water bottles that will accompany the trip. It will be the second Freedom Honor Flight of 2022. The first flight was May 7.

Serving 30 counties in three states, the La Crosse hub of Freedom Honor Flight flies military veterans at no charge to Washington D.C. to visit the memorials built in their honor. The trip is completed in a single day and includes visits to the World War II Memorial, Korean War Memorial, Vietnam Wall, Marine Corps War Memorial and Arlington National Cemetery.

With spring and fall flights, the organization funds trips for more than 200 veterans annually. The 100 veterans on Saturday’s flight will be joined by 90 chaperones and support staff. The chaperones pay their own way.

Freedom Honor Flights have transported more 1,800 veterans since 2008. Clark said it will be a challenge to keep the flights going. He said many Honor Flight hubs across the nation shut down and haven’t come back after COVID-19.

“We’ll need more help to continue operating these flights,” Clark said. “With 700 veterans still on our list, most of them Vietnam, we still have a lot of work to do.”

Clark said it’s important to complete the list, especially as the Vietnam era veterans get older. He said it’s a special moment when the veterans step off the plane after a day in Washington, D.C.

Colorado police cruiser hit by train with suspect handcuffed inside

Colorado police cruiser hit by train with suspect handcuffed inside

Freedom Honor Flight director Ryan Clark speaks to the media as volunteers mount a flag to welcome the 100 veterans who will fly Saturday to Washington, D.C.

Snacks are organized for participants in Saturday's Freedom Honor Flight.