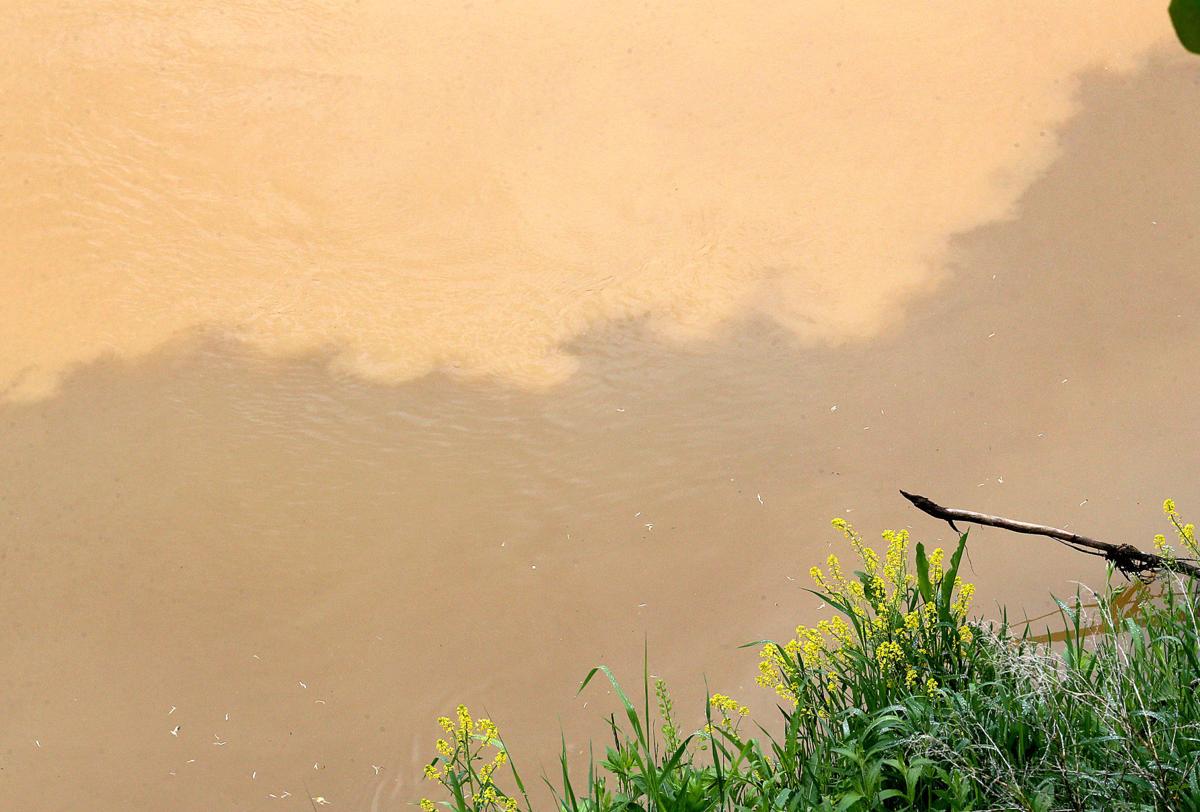 An unidentified substance from the Hi-Crush mine in Whitehall, Wis,. colors the Trempealeau River orange Tuesday near Dodge, Wis. 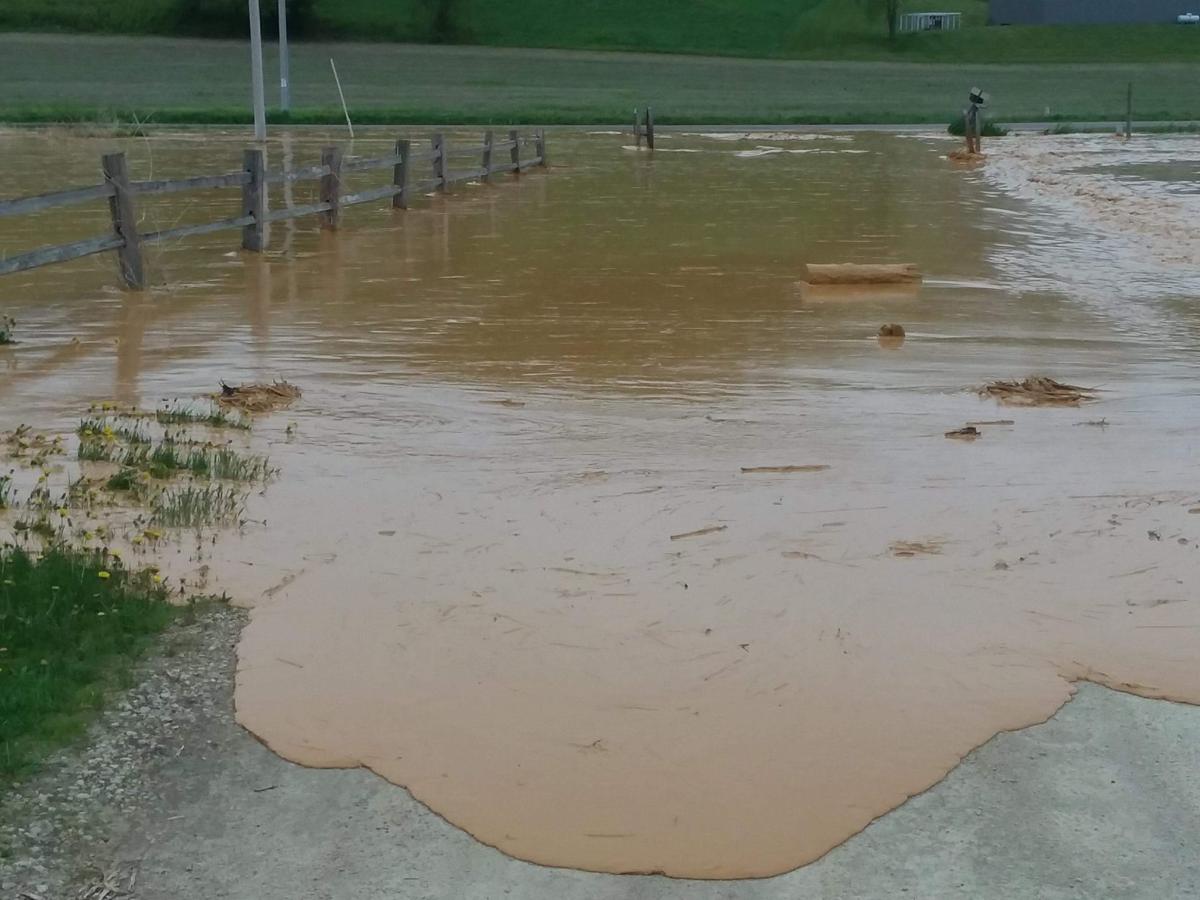 State and local authorities are working to determine the environmental impact after about 10 million gallons of sludge was released from a settling pond to rescue a worker at a Trempealeau County frac sand mine.

Emergency responders from multiple agencies responded to the Hi-Crush mine in Whitehall just before 8 a.m. Monday after a contractor’s bulldozer slid into the pond, which company officials said was 12 to 15 feet deep.

The operator, Robbie Gunderson, was trapped inside the airtight cab of the 23-ton earth mover for two and a half hours as rescuers tried to reach him. After first responders recommended lowering the water level, Hi-Crush workers used excavators to dig through the earthen berm and release the contents, said Scott Preston, chief operating officer of the Texas-based company.

That released a flow of orange water and mud into a nearby tributary of the Trempealeau River. By Tuesday afternoon the spill had traveled some 25 miles downstream, turning the river orange.

As of 10 a.m. Wednesday, the orange-tinted water had reached Perrot State Park, where the Trempealeau River enters the Mississippi River.

Company officials estimate about 10 million gallons of liquid were spilled. That volume of water would fill a 10-foot deep space larger than two football fields. It is the equivalent volume of water flowing past La Crosse in every 21 seconds in the Mississippi River.

The contents of the pond were primarily “water, silt, clay and sand,” though Hi-Crush environmental compliance manager Jeff Johnson said it could contain “trace amounts” of a polyacrylamide, a chemical used to remove silt from the water, which is used to process the sand for use in natural gas and oil wells.

Preston said regular tests of water released from the mine site “show no indication of substances that are harmful to wildlife, humans or the environment.”

Angela Sylla, who lives across the road from the mine, said the sludge filled ditches, plugged a culvert and covered her neighbor’s driveway and field. Sylla said she took her own water samples and sent them to separate labs for testing.

Trempealeau County Supervisor George Brandt described the material as “incredibly thick,” and said the county’s land management department was awaiting test results to determine “what’s in the water and if it’s dangerous or not.”

A spokesman for the Wisconsin Department of Natural Resources said a spill team was on site Tuesday trying to determine the quantity and contents of the sludge.

In a follow up news release, the agency said, “Cleanup of the sediment is ongoing and Wisconsin Department of Natural Resources staff continue to monitor the water quality of the tributary and the Trempealeau River.”

Roger Haro, a professor of biology in the River Studies program at the University of Wisconsin-La Crosse, said a sediment plume can smother animals and plants that live on the river bottom, which in turn uses up oxygen in the water.

The spill had reached Dodge by noon Wednesday and was heading toward the Trempealeau National Wildlife Refuge, where the Trempealeau River flows into the Mississippi River.

Sabrina Chandler, manager of the Upper Mississippi River National Wildlife and Fish Refuge, said the Fish and Wildlife Service was still working to figure out the potential impact.

“Any time something foreign, chemicals get into the river it’s a concern,” Chandler said. “At this point we don’t know what the implications may be.”

Preston said Hi-Crush is cooperating with investigations by the DNR and the federal Mine Health and Safety Administration. He said the company has installed barriers to contain the silt and is working to clean up surrounding land “when neighbors will allow us on their property.”

“Our intention is that we will participate fully in any and all restoration efforts,” Preston said, noting that Hi-Crush is certified through the DNR’s Green Tier program, which offers relaxed monitoring and streamlined service for companies that meet environmental management standards.

The 1,447-acre Whitehall mine and processing site is one of four Wisconsin sites operated by Hi-Crush. The site reported eight worker injuries in 2017, a rate more than 10 times the national average, according to the MSHA data. The regulatory agency has cited Hi-Crush Whitehall 18 times since the facility opened in 2014, resulting in fines totaling $2,887.

Brandt, who chairs the county’s environment and land use committee, said the county does not have regulatory jurisdiction over the mine, which is in the city of Whitehall. The city administrator did not return messages Tuesday.

“Once it got into the river it’s the entire county’s issue,” Brandt said. “It’s everybody’s issue now.”

Preston thanked the first responders and community members — including 3 fire departments, 3 ambulances, highway department workers and even a nearby towing company — who participated in the rescue.

“Anybody and everybody who thought they had equipment to help really wanted to come out,” Preston said.

Gunderson, who was home with his family in Whitehall, issued a statement through Hi-Crush: “doing fine.” 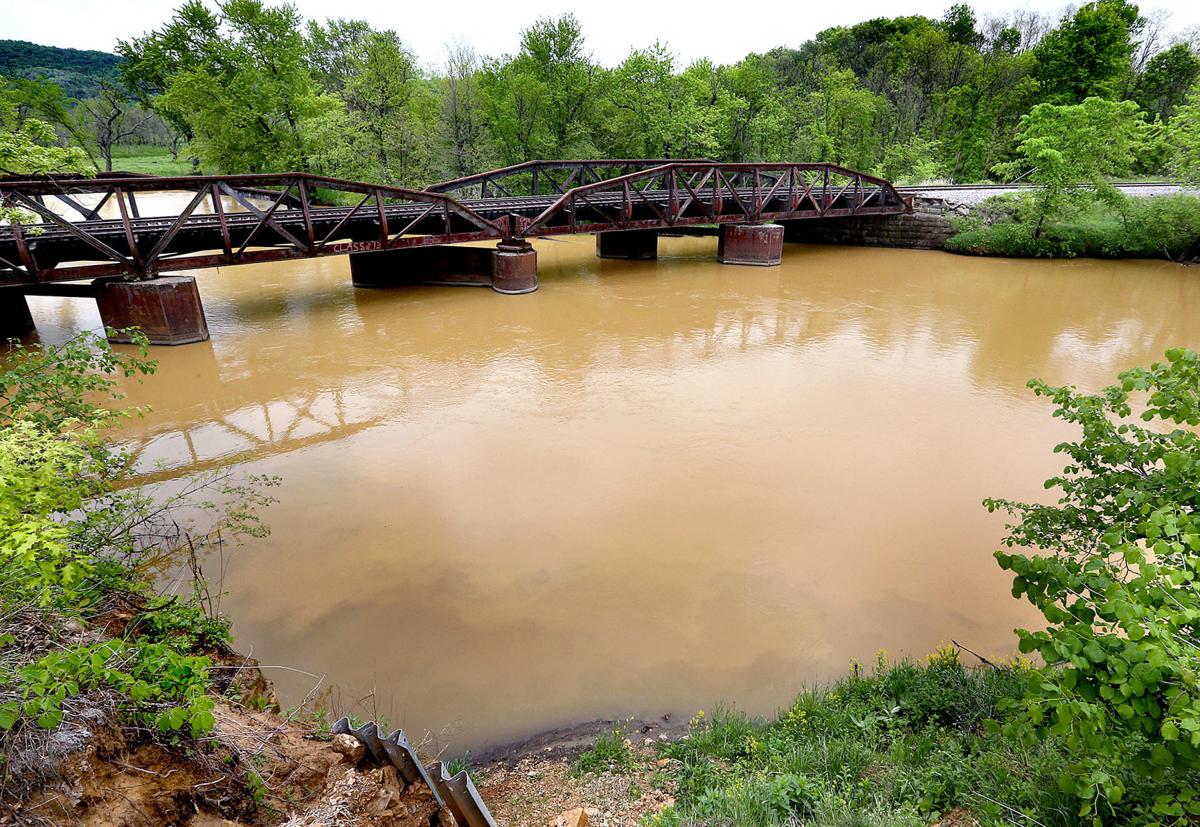 An unidentified substance from the Hi-Crush mine in Whitehall, Wis., is seen Tuesday in the Trempealeau River near Dodge, Wis. The sludge-like substance was released from a holding pond at the mine Monday by emergency responders rescuing a worker whose bulldozer slid into the pond.

An unidentified substance from the Hi-Crush mine in Whitehall, Wis,. colors the Trempealeau River orange Tuesday near Dodge, Wis. 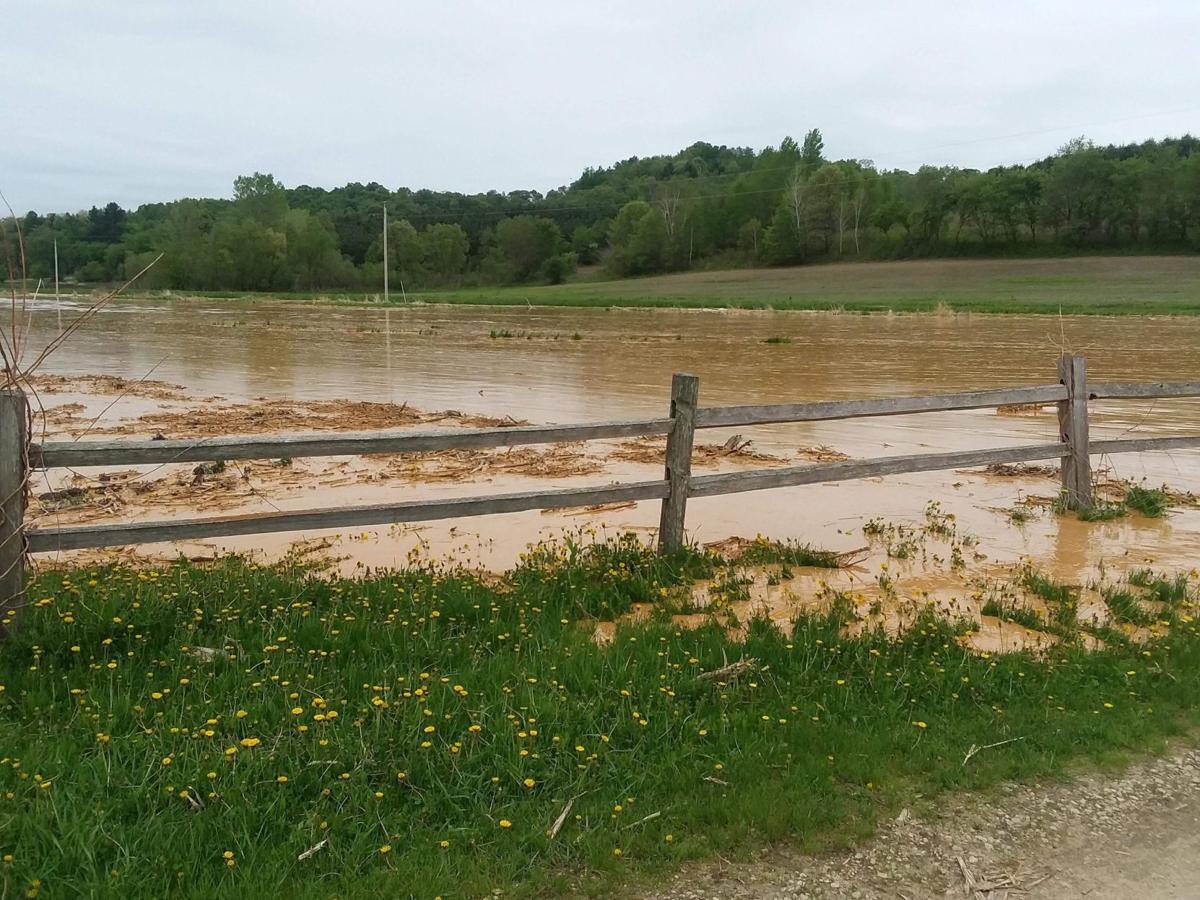 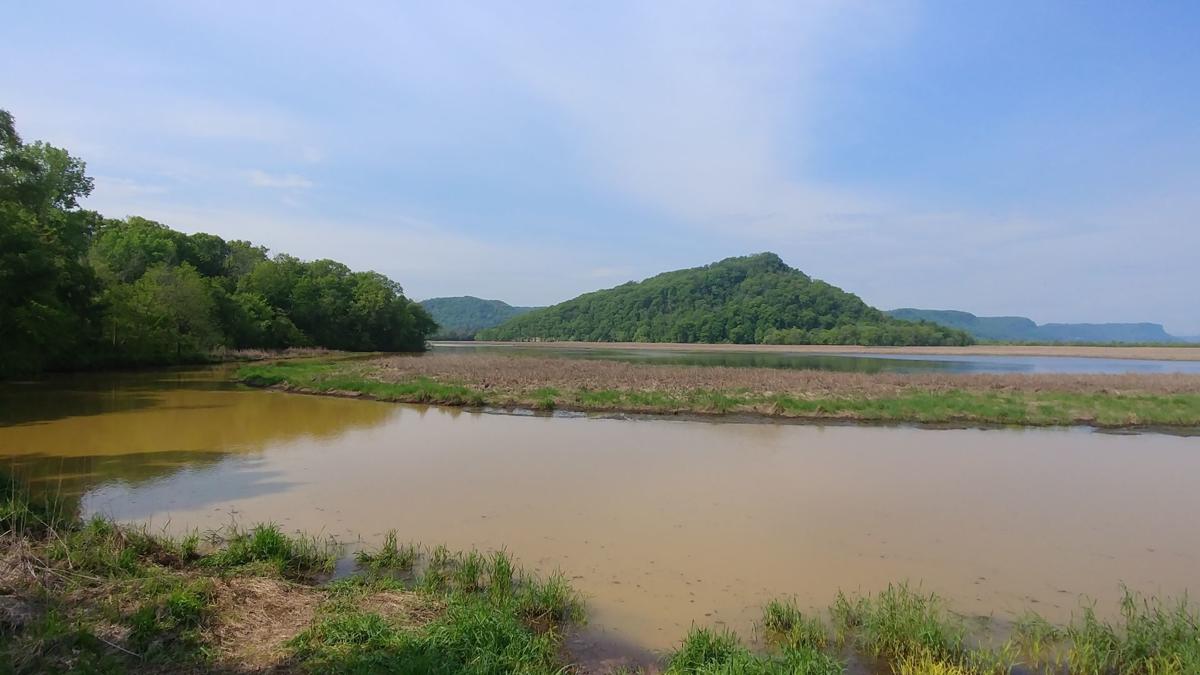 Orange tinted water is shown just before 10 a.m. Wednesday in Perrot State Park, where the Trempealeau River empties into the Mississippi River.