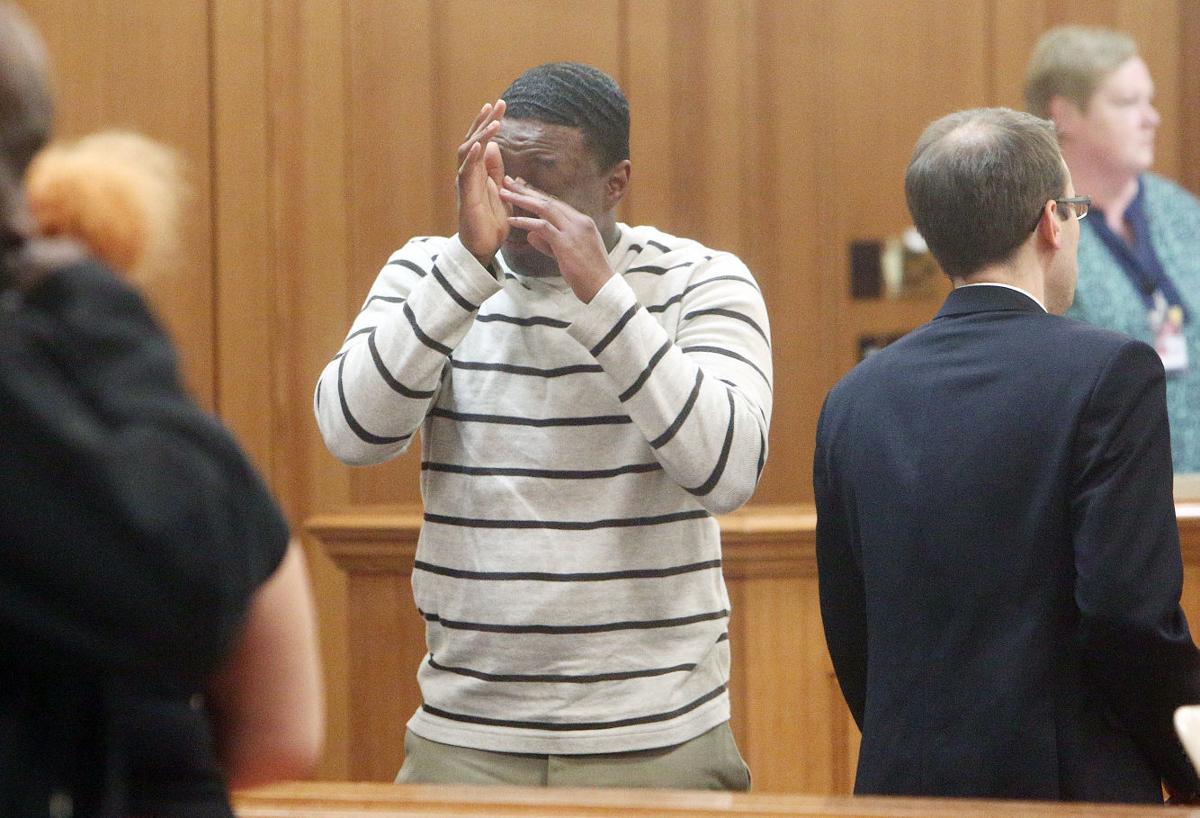 Mitrel Anderson wipes tears from his eyes after he was found not guilty in the June 2, 2013, fatal stabbing of DeMario Lee at the Cass Street Kwik Trip. 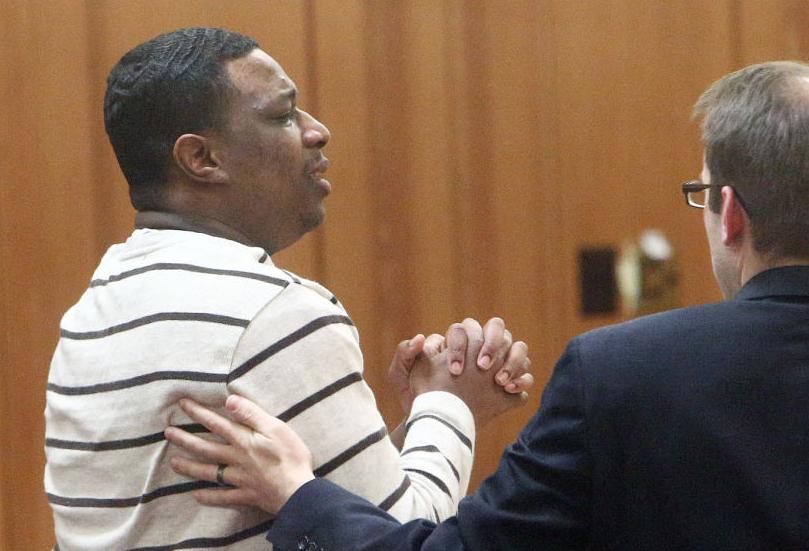 Mitrel Anderson reacts after he was found not guilty Tuesday evening in the June 2, 2013, fatal stabbing of DeMario Lee at the Cass Street Kwik Trip. 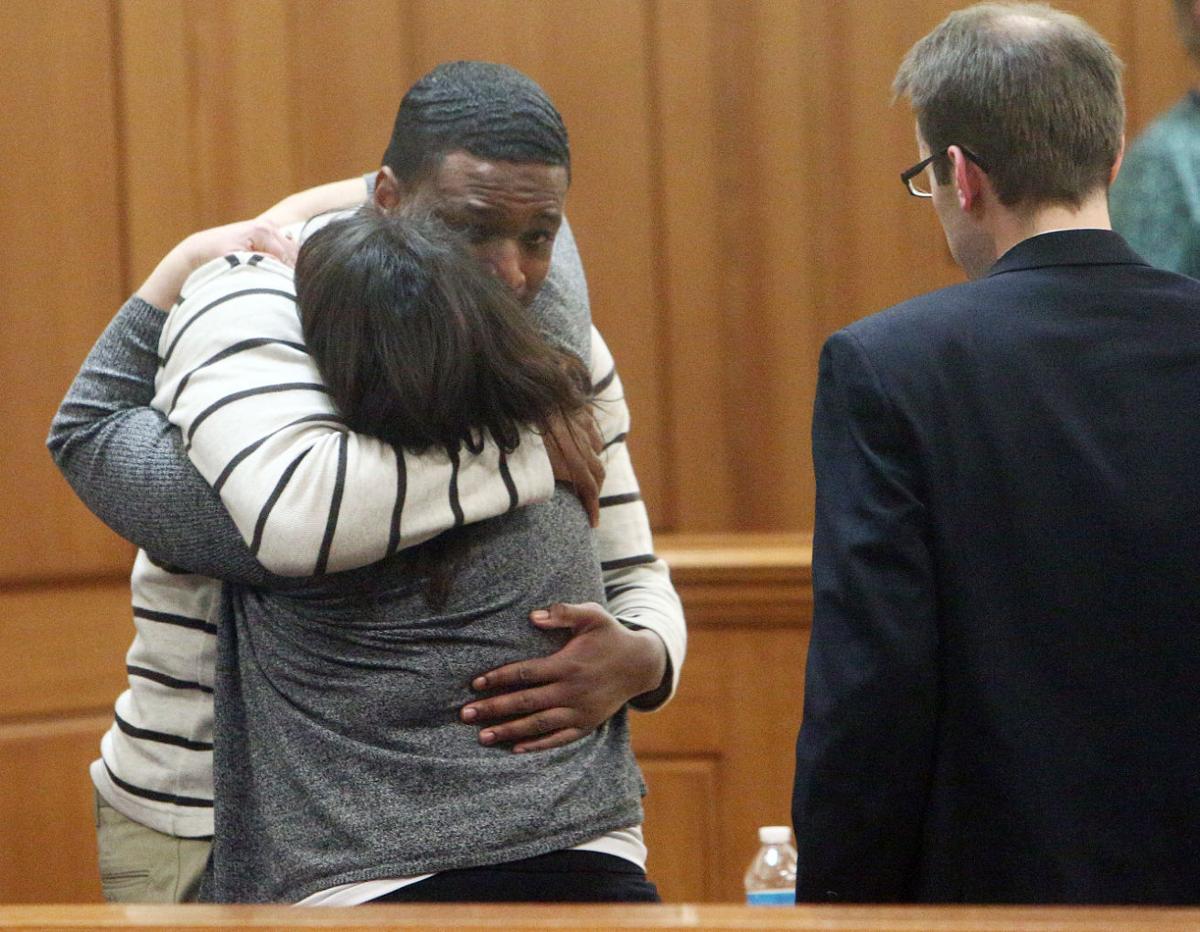 Mitrel Anderson hugs a member of his legal team after being found not guilty in the June 2, 2013, fatal stabbing of DeMario Lee at the Cass Street Kwik Trip.

Anderson cried and his supporters celebrated the verdict with gasps of relief, while Lee’s family and friends sobbed and immediately left the courtroom.

“We knew all along Mitrel wasn’t responsible. The jury did the right thing today,” Anderson’s attorney Christopher Zachar said after 6½ hours of jury deliberations. “We couldn’t wish for a better Christmas present for the family.”

An excited crowd waited outside the La Crosse County Jail doors, where Anderson emerged a free man at 7:55 p.m. to waiting arms.

“Fresh air,” were his first words when he made it outside the courthouse.

For seven days, jurors in La Crosse County Circuit Court listened as prosecutors during the eight-day trial argued Anderson acted with the intent to kill when he stabbed Lee inside the Cass Street Kwik Trip restroom, while his attorneys fought to show the jury that he used deadly force to save his own life.

“You have a right to protect yourself,” defense attorney Elizabeth Wright told jurors in her closing argument.

Attorneys and witnesses agree on this much: that Anderson killed Lee. They offer conflicting arguments and testimony about everything else — how the fatal fight unfolded, what happened in that bathroom between 3:13 and 3:19 a.m. June 2 and the aftermath.

It took less than a second for Anderson to claim a life and change his, Deputy District Attorney Michelle Keller told jurors Thursday in her closing argument.

Anderson at 3:19 a.m. drew a knife from his pants pocket, swung his right arm and drove the blade 3½ inches through the skull of his former childhood friend.

Lee collapsed to the floor, dying in a pool of blood, outside the restroom. He didn’t want to kill, Anderson testified through tears, he just wanted to leave that restroom.

“Would you like your whole life to be decided in two-thirds of a second?” Wright asked jurors.

Once considered as close as brothers, Lee severed his friendship with Anderson and threatened to kill him in mid-April 2013 after Anderson complained to Lee’s mother that her son defaulted on a $2,500 loan.

“When I catch you by yourself, I’m going to kill your (expletive),” Lee told him, Anderson testified.

Anderson was alone when he walked into the gas station restroom at 3:13 a.m., followed by Lee and two others. Anderson testified Lee started the fight with the first swing; prosecutors argued Anderson was the instigator.

“No matter what happened inside, DeMario Lee was done,” Keller told jurors. “He’s coming out.”

Anderson told the jury his fear of death rose when Lee ordered a bystander to get a gun. Anderson’s brother who fought his way into the restroom could not corroborate any statement about a weapon.

“The defendant brought a knife to a fist fight and now he’s coming up with a reason for that,” Keller said.

To believe the self-defense claim, the jury had to trust Anderson, a defendant who cannot be trusted because he lied about “every important detail” in his case, the prosecutor said.

“The question is, ‘Did he have to kill him?’ No. When you are getting roughed up in the bathroom, you have no justification for stabbing someone in the head,” the prosecutor said. “When you drive a knife halfway through someone’s head, you are practically certain they are going to die.”

Anderson walked calmly from the store after the stabbing, leaving his brother behind in the restroom. He fled with girlfriend Brittany Jones, who did not testify, to Madison, where he visited family, drank and attended a barbecue. He did not report himself to police.

“These are not the actions of a man forced to kill because he was afraid for his life,” Keller said.

Anderson’s life changed in the moment that Lee made him use deadly force to save his own life, Wright said.

“This case is about a split-second decision,” she said.

Anderson was outnumbered inside the restroom and cornered by Lee, who was almost twice his size, drunk, high and brazen enough to start a fight in a public place, Wright said.

“Anderson’s heart dropped when he saw DeMario Lee,” she said.

Lee punched Anderson in the mouth, pinned him to the ground and shoved his face into the floor while threatening to kill him, Wright said. Lee’s violent past and repeated threats to kill compounded Anderson’s fear for his life.

“His fear drove him to act,” Wright said.

Lee held Anderson against his will, and the clock started ticking for Anderson when he believed the bystander went to retrieve the firearm.

“It was a now or never moment for Mitrel,” Wright said.

Anderson did not start the fatal fight, his attorneys contended. He would not go in a restroom alone armed with only a knife and wait for Lee, who he believed carried guns.

Oliver Odulana, the only eyewitness to the entire fight and the state’s “star witness,” lied when he testified that Anderson started the fight with two punches to Lee’s mouth, Wright said. Autopsy results did not support his story.

“He lied because he played a role in attacking Anderson,” Wright said.

Anderson was heartsick after the homicide because he was not a “cold-blooded killer” but rather a “scared kid” who wasn’t thinking, Wright said.

Anderson juror: ‘You fear for your life, you go to the extreme’

The Mitrel Anderson trial was a difficult case because it involved a loss of life and another man fighting for his, one juror said.

A La Crosse man charged in a 2013 fatal stabbing at a downtown gas station faces his sixth criminal case since a jury acquitted him of homicide.

Photos and surveillance video stills from the trial of Mitrel Anderson, who fatally stabbed DeMario Lee in June 2013 at the Kwik Trip store in…

Mitrel Anderson: 'It was my only option'

Mitrel Anderson wipes tears from his eyes after he was found not guilty in the June 2, 2013, fatal stabbing of DeMario Lee at the Cass Street Kwik Trip.

Mitrel Anderson reacts after he was found not guilty Tuesday evening in the June 2, 2013, fatal stabbing of DeMario Lee at the Cass Street Kwik Trip.

Mitrel Anderson hugs a member of his legal team after being found not guilty in the June 2, 2013, fatal stabbing of DeMario Lee at the Cass Street Kwik Trip.