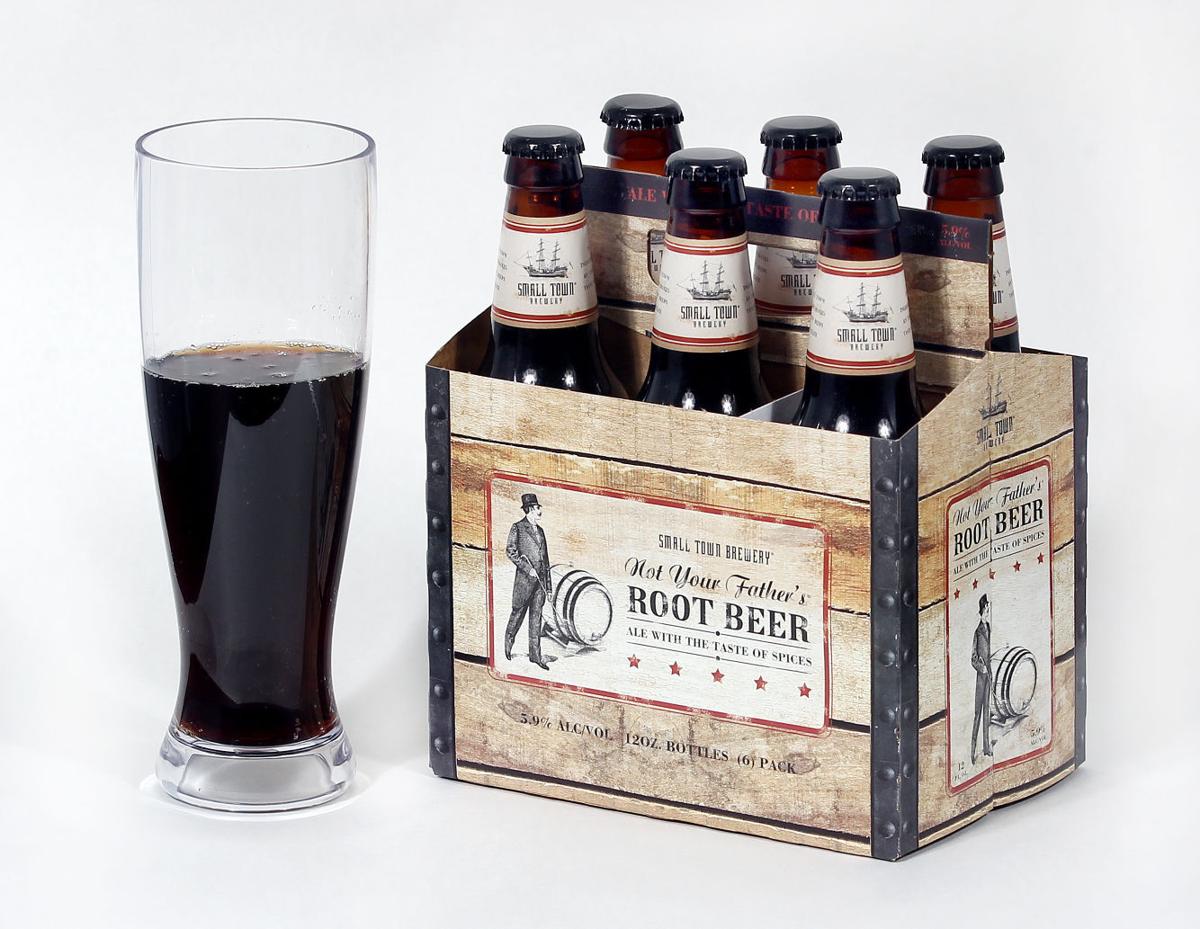 Not Your Father's Root Beer is produced at City Brewery in La Crosse under a contract with Small Town Brewery. The beer's production accounts for about 45 jobs among the roughly 500 salaried and hourly jobs at the La Crosse plant, said CEO George Parke. 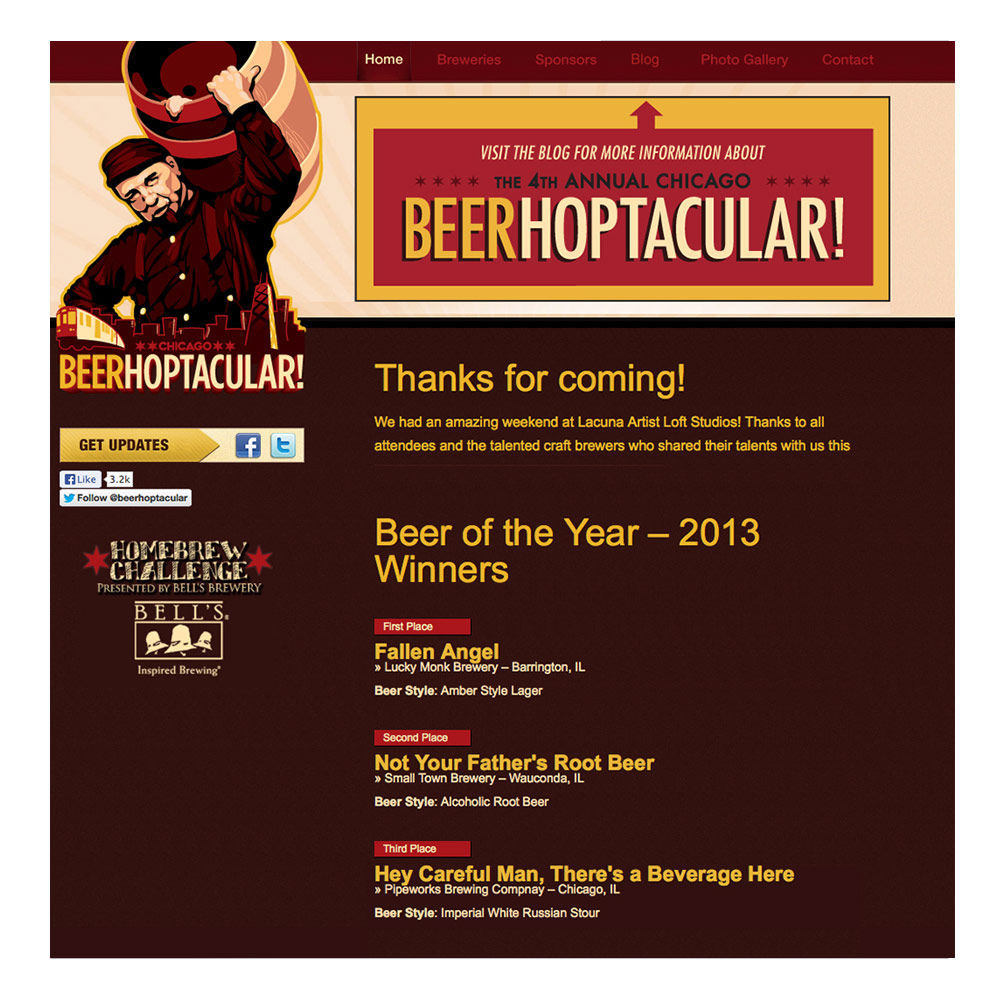 Not Your Father's Root Beer won second for Beer of the Year for 2013 at Chicago's Hoptacular.

Workers at City Brewery in La Crosse are toasting the success of a root beer on steroids because it is ensuring their jobs during a season when lager production often lags.

Their job security comes from Not Your Father’s Root Beer, which has alcoholic content by volume ranging from 5.9 percent to 19.5 percent and is vanishing from shelves faster than a rainbow after a spring rain.

The libation, created at a suburban Chicago small-town brewery that goes by the appropriate name of Small Town Brewery, contracted with the much larger City Brewery to produce it.

“It’s a phenomenon,” City Brewery CEO George Parke said during an interview Thursday. “It’s a great opportunity. It alone is supplying 45 jobs or more” among the roughly 500 salaried and hourly workers at the plant at 925 S. Third St.

“This time of year normally is slow,” often requiring some layoffs, Parke said. But the plant has not had to do so, “and Small Town is a huge part of that.”

“It is different this year, with more overtime, no layoffs and no shutdowns,” he said. “From a production standpoint, we never have seen anything take off as fast and as strong as Small Town.”

Underscoring that assessment is the fact that the brand’s sales frothed up to $7.2 million from the beginning of this year until June 14, according to Beer Marketer’s analysis of IRI data.

It was the sixth-best-selling craft brewer for the four weeks that ended July 12, accounting for 3.3 percent of retail craft dollar sales, an achievement that stuns Tim Kovac, Small Town’s founder and brewmaster.

“It’s a dream come true for me and my family,” Kovac said in response to Tribune questions submitted via email because he was too swamped for an interview.

Kovac credits his son with the idea of adding alcoholic root beer to his brewery’s offerings, explaining, “Everyone in our family loves root beer — I think most people have a soft spot for it.

“Then we looked it up and learned that alcoholic root beer was quite popular in colonial America, so we started working on it,” he said.

But it took more than just a few hops, skips and jumps to create a recipe worthy of putting in kegs and bottles en route to snagging second place in the Beer of the Year competition for 2013 at the Beerhoptacular in Chicago, Kovac acknowledged.

“Two years and countless batches later, we had the perfect taste — one that seems to really appeal to everyone,” he said.

Unable to meet demand at his small brewery, Kovac tapped into City Brewery’s knack for rolling out craft beers, flavored malt beverages, teas, soft drinks and energy drinks. The La Crosse brewery uses about 40 brew recipes of its own and from more than a dozen brewers who contract with City Brewery to produce their beers, according to its website.

Kovac said he picked City Brewery in part because of La Crosse’s proximity to Wauconda, about 250 miles away, but “more importantly, they were willing to work with me for over a year doing trials — that’s in addition to the first two years my son and I worked to get it right at our small brewery.”

Getting it right is an ongoing endeavor, Kovac said, adding, “It’s a delicate process. We are trying to stay true to classic flavor profiles but at the same time utilizing modern technology and seeking to translate a product concept to our time by making sure the brew is in line with the taste preferences of today’s consumers.”

“That’s really how beer was made for the first 5,000 years before hops were legally mandated to become the main bittering agent in the 15th and 16th centuries,” he said.

That era has another point of significance for Kovac, whose family traces its brewing tradition to his great-great-grandfather’s career as an English ship’s captain in the 1600s.

“As legend has it, he won a brewery during a high-stakes card game, which led him to start crafting his own beers. He began brewing beer on the ships he sailed. This allowed him to travel farther than other vessels because beer stayed fresh during long journeys. The story goes that his beer was even consumed on a fleet of ships he commanded that transported some of the earliest settlers to America,” according to Kovac’s account on Small Town’s website.

“Growing up, I had never heard the complete story about my great-great-grandfather until I expressed an interest in making my own beer,” Kovac wrote. “When I told my mom that I planned to open a brewery, she finally revealed my family’s beer-making history and why brewing was ‘in my blood.’

“Using some of my great-great-grandfather’s recipes as inspiration, I founded Small Town Brewery. At Small Town, our goal is to honor my family’s beer-making tradition by creating specialty beers with unique and flavorful ingredients.”

Initially available only in Illinois, the 5.9 percent ABV Not Your Father’s Root Beer now is available in 40 states, and Small Town aims to achieve distribution to all 50 states by the end of the year, Kovac said.

To help reach his goals, Kovac entered into a partnership with Pabst Brewing Co. Chairman and CEO Eugene Kashper and other Pabst principals early this year for Small Town and the Not Your Father’s Brand. Pabst markets the brew nationally under a long-term distribution agreement, Kovac said.

“As for the rest of the year and the future, (it is) very hard to estimate volumes, as it looks like there are some real supply limitations for some of our unique ingredients,” Kovac said.

In addition to the six packs of 12-ounce bottles of 5.9 percent ABV sell for $10 to $12 locally, Small Town also has two 22-ounce limited editions — one at 10.7 percent ABV and the other, at an eye-popping 19.5 percent. Those are available now only in Illinois, but the brewery is working to expand to other states, Kovac said.

Meanwhile, local purveyors are having trouble keeping up with demand, even though the price point is not in your average Joe Six Pack’s budget.

A clerk in the liquor department at a La Crosse Festival foods store said sales are “crazy,” while a worker at a La Crescent liquor store said the outlet receives supplies every two to three weeks, and they are sold out within three or four days.

In New Jersey early this year, some stores that were limiting customers to a case soon scaled that back to six packs to please more customers, according to NJ.com.

Even Fast Eddie Habhegger is dazed at the speed of sales of the root beer doppelganger.

“If I’d have invented it, I’d be able to retire,” said Habhegger, owner of Fast Eddie’s Discount Liquor Store just outside of Sparta. “I’ve been in this business 55 years, and I’ve never seen anything like it.”

Guessing that he has sold 500 cases since his first shipment in April, Habhegger confided in a conspiratorial whisper, “I’ll tell you something about the 21- to 30-year-old girls. They come in and get it and little bottles of RumChata (a liqueur made from Caribbean rum and Wisconsin cream) and say they’re going to put it in the beer — and it tastes just like a root beer float.

“Boy do they get to giggling, saying how much fun they’re going to have,” he with deep-throated laughter.

Among those who have whipped up a float with just plain old ice cream is none other than Tim Kovac himself.

“The third way is with a lot of ice in a glass then pouring Not Your Father’s Root Beer very slowly,” he said. “It’s very refreshing, and you can taste all those wonderful spices.”

It’s beyond refreshing locally, as the Festival clerk remarked, “I bet the guys at the brewery are happy.”

Brew and a Bite: Try some Best Damn Root Beer this summer

There are two telltale signs of summer in this region — the opening of Lakeview Drive Inn in Winona and Rudy’s Drive In Restaurant in La Crosse.

Not Your Father's Root Beer is produced at City Brewery in La Crosse under a contract with Small Town Brewery. The beer's production accounts for about 45 jobs among the roughly 500 salaried and hourly jobs at the La Crosse plant, said CEO George Parke.

Not Your Father's Root Beer won second for Beer of the Year for 2013 at Chicago's Hoptacular.