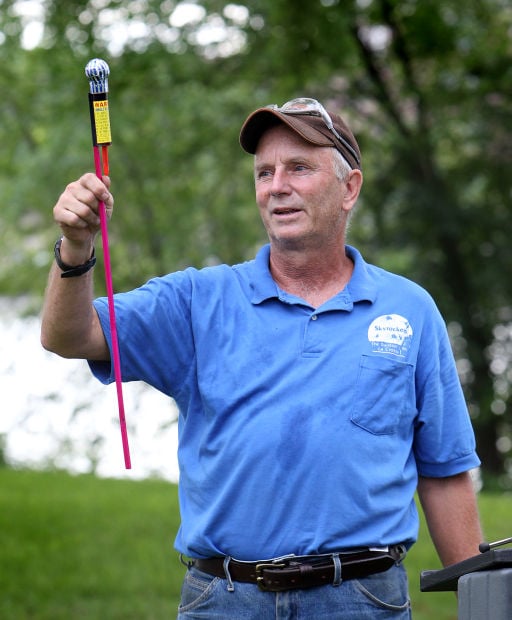 La Crosse Skyrockers President Pat Bonadurer talks about the dangers of fireworks during a press conference Monday at Pettibone Park. Rockets such as this one, which is illegal in Wisconsin, drop debris back to earth that can cause fires and injuries, he said, while the fireworks that the Skyrockers shoot disintegrate safely in the air. 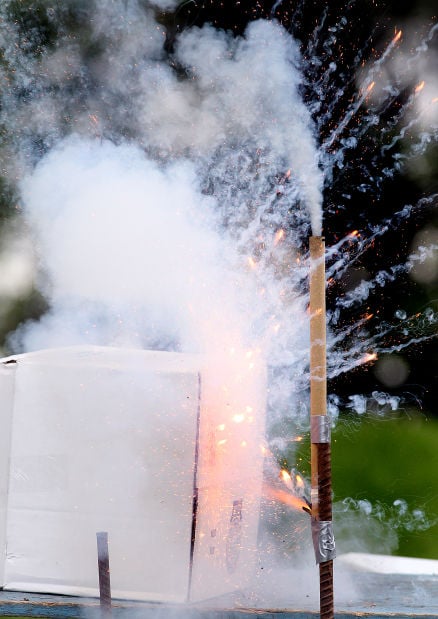 The La Crosse Skyrockers demonstrate what could happen if a Roman candle fails.

La Crosse Fire Division Chief Craig Snyder speaks from experience when he warns people about the potential peril from fireworks: An uncle lost an eye to a misfiring bottle rocket.

In the early 1980s, the uncle and friends were holding the bottles as they lit bottle rockets and one appeared to be a dud, Snyder said.

“One didn’t ignite, so he looked over his friend’s shoulder to see,” Snyder said. “It hit him in the face and caused severe facial burning, destroyed the eye socket and caused bleeding in the brain.”

The incident required a lengthy hospital stay, as well as surgery to repair the facial injuries and the insertion of a glass eye, he said of the six-month ordeal.

Snyder, who heads the city’s fire inspection services, related the story during an interview after he, police and medical officials and members of the La Crosse Skyrockers spoke at a press conference on fireworks safety that Gundersen Health System convened Monday near Pettibone Beach.

They all blamed alcohol and/or unsupervised children for most fireworks incidents, which Snyder said cause 18,000 fires resulting in $32 million damage nationally each year. They cautioned against using illegal fireworks and said even legal ones can be perilous.

“The good news is we see just a handful of cases from fireworks, but they can be devastating” eye and skin injuries, said Dr. John Pershing of Gundersen’s Emergency Services Department.

Many injuries occur when people light fireworks with bare hands, point them at each other or grab sparklers without realizing they still are hot, Snyder said.

“It’s things they see on YouTube or the ‘Jackass’ movies, but they don’t know how hot they are,” he said. “The tip of a sparkler is 1,200 degrees. That’s six times hotter than boiling water. I ask people if they would put their hand in boiling water.”

Determining legality is simple in Wisconsin, where items such as sparklers, smoke bombs, toy snakes, confetti poppers and devices that rest on the ground while shooting sparks into the air generally are OK, said La Crosse Police Lt. Pat Hogan.

“If it explodes or goes up in the air, it’s probably illegal,” which can lead to a $124 fine, Hogan said.

Fireworks assortments available in big-box stores probably are legal, while some sold at some independent vendors are illegal, officials said.

The quality of items at some tent vendors can be questionable, increasing the danger, said Pat Bonadurer, president of the volunteer La Crosse Skyrockers, which will put on the Riverfest fireworks show at 10 p.m. Friday.

“The very nature of fireworks is an explosion and very hot, rapid fire,” said Bonadurer, who also has been involved with shooting the works at Grandad Bluff each winter in the run-up to the New Year’s Eve show.

“I worry that people don’t know how to use them,” he said before demonstrating a few dangers and tricks of the trade.

He used hands made out of gelatin to indicate what would happen to a human hand grabbing one in the wrong place: The gelatin melted.

Switching to illegal M-80s and noting the additional danger of holding firecrackers in the hands, Bonadurer lit a couple in gelatinous hands, which were blown to smithereens.

Roman candles, which are illegal, can be especially dangerous because they are unpredictable and can shoot balls of fire out their sides, Bonadurer said.

“A lot of people — especially when alcohol is involved — have Roman candle wars,” he said.

“If something goes wrong, you can’t depend on ’em going out the top,” he said, demonstrating how the fireballs can escape through a weak point in the tube.

With bottle rockets and similar, larger projectiles, parts fall back to earth and cause injuries or fires, he said.

The Skyrockers’ explosives disintegrate in the air, and the nonprofit group uses electronics to set off the fireworks from a safe distance, Bonadurer said.

He and others who spoke at the press conference urged fireworks junkies to attend officially sanctioned, professional displays or — at the very least — use only legal fireworks, avoid alcohol and make sure children are supervised.

If you plan to have your own backyard fireworks display, officials caution not to mix pyrotechnics and alcohol, and make sure children are supervised. Illegal fireworks — generally, anything that explodes or leaves the ground — can lead to a $124 fine in the city of La Crosse.

La Crosse Skyrockers President Pat Bonadurer talks about the dangers of fireworks during a press conference Monday at Pettibone Park. Rockets such as this one, which is illegal in Wisconsin, drop debris back to earth that can cause fires and injuries, he said, while the fireworks that the Skyrockers shoot disintegrate safely in the air.

The La Crosse Skyrockers demonstrate what could happen if a Roman candle fails.