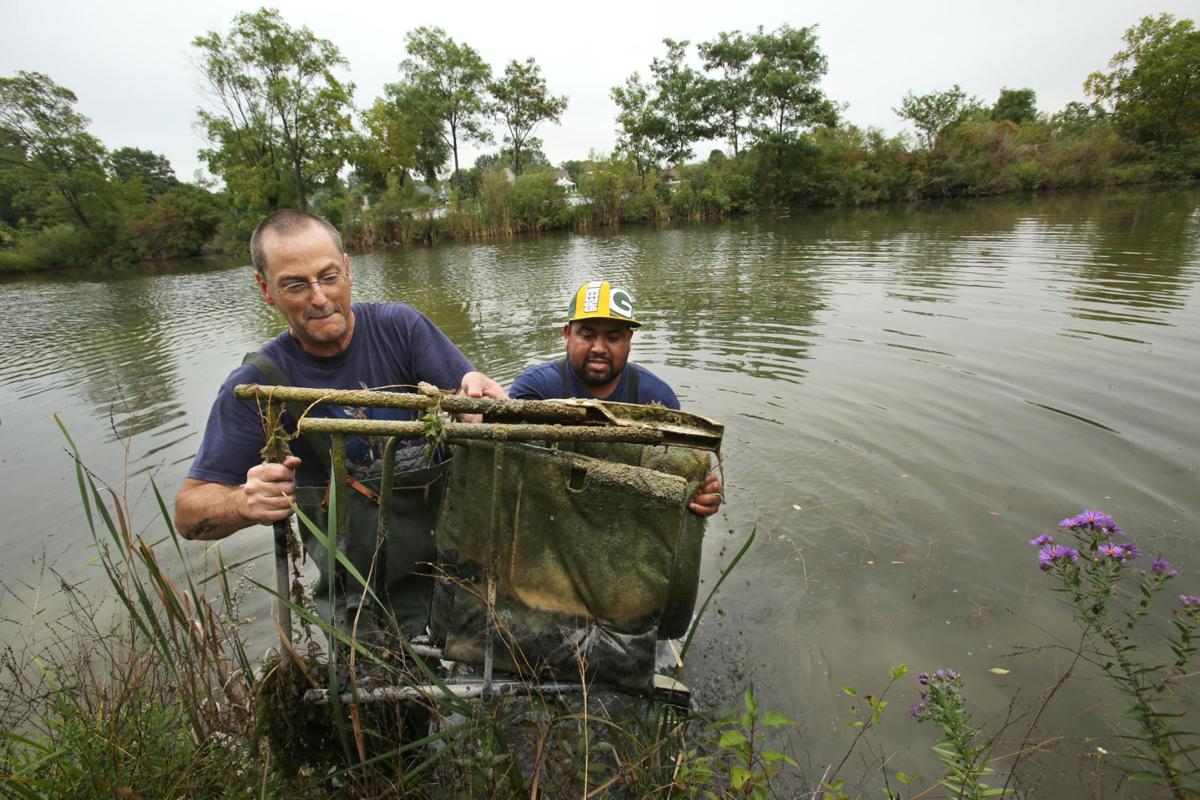 Jim Boulden, left, a volunteer with Rock River Rescue, and Jose Moreno, an employee at the Johnsonville Sausage plant, pull a chair out from the water as a group works on the clean-up at Heiden Pond in Watertown. 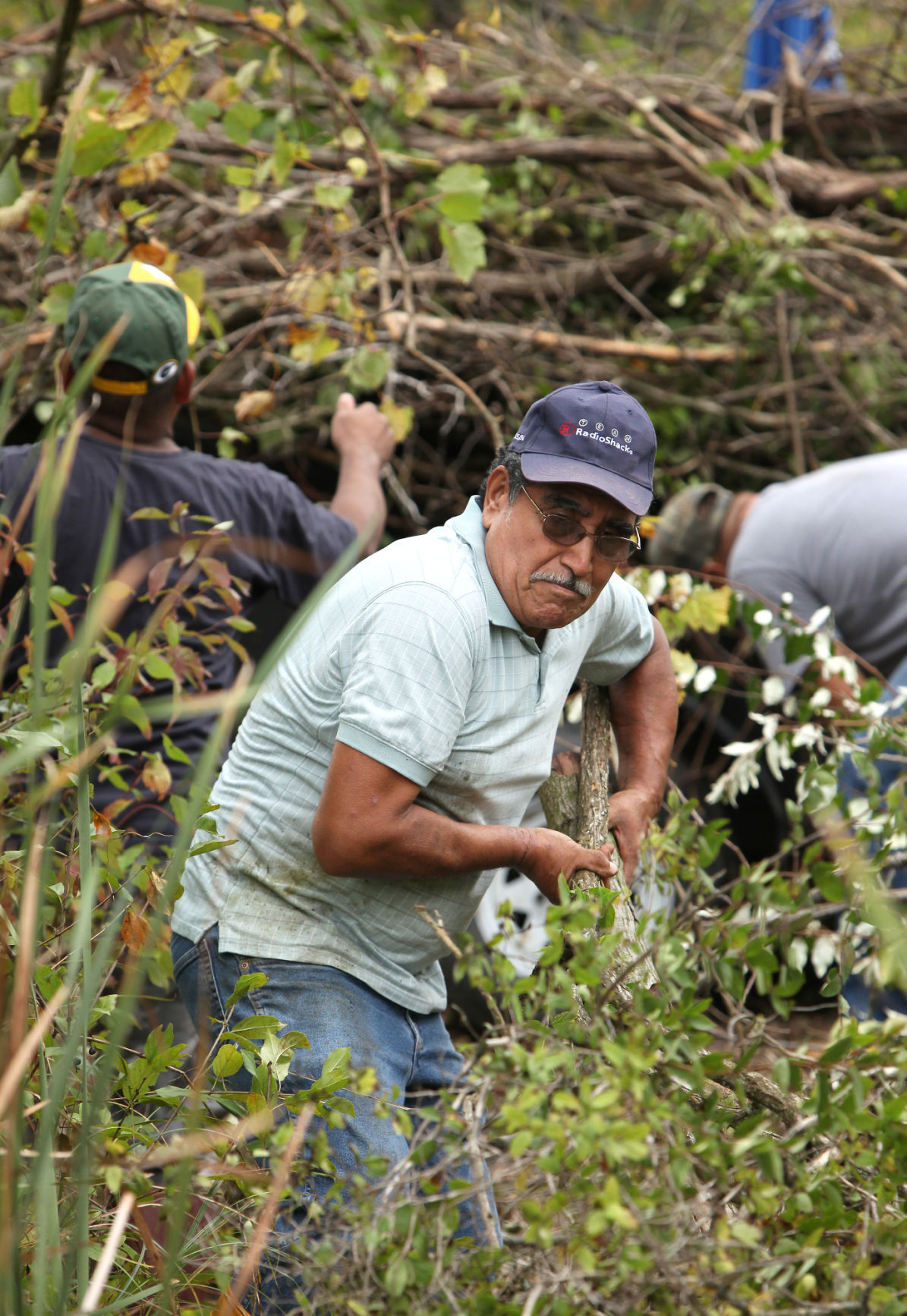 Rufino Chairez, an employee at the Johnsonville Sausage plant, helps clear brush during a restoration project at Heiden Pond in Watertown, Wis.

WATERTOWN — Jose Moreno had serious concerns when he arrived for work on May 15.

He and his wife just had a baby and now his job appeared in jeopardy after an early morning fire destroyed the Johnsonville Sausage factory here where Moreno had worked for the past eight years.

Moreno, 37, is still working and being paid by the bratwurst giant. Only on Friday, instead of using a knife to process hogs, he wore green chest waders and slogged through the muck of Heiden Pond to search for debris in the cloudy water.

“I thought I was going to be unemployed,” Moreno, who lives in Lake Mills, said during a break. “You have a family and you have to support them.”

The work by Moreno and his co-workers is an effort by Johnsonville to retain the 120 employees at its Watertown plant as the company rebuilds its operations here. So instead of losing the workers, Johnsonville is keeping them busy and maintaining their pay and benefits.

The work on Friday was to help the Rock River Rescue Foundation restore the pond that had become overgrown by trees and brush and clogged with debris. Other community projects have included landscaping and brush removal at the Octagon House and at the municipal airport, sorting items at Bethesda Thrift Store and painting projects at City Hall.

The workers are also taking classes at the Watertown campus of Madison Area Technical College, where they are learning computer and math skills and improving their English. A few, including Moreno, are working towards a high school equivalency certificate.

“You don’t hear of companies doing that,” Moreno said.

Johnsonville Sausage is one of Wisconsin’s iconic companies and ranks with the likes of Kohler Co., Harley-Davidson, Oshkosh Truck, Oscar Mayer and the Green Bay Packers, which after all, is a pretty big business, too.

The sausage company was founded in 1945 by Ralph F. and Alice Stayer, who opened a butcher shop and named it after their hometown, located along the Sheboygan River between Sheboygan and Elkhart Lake. That led to distribution throughout Wisconsin and, by 1978, out of state. Today, the company sells its products in all 50 states and 40 countries and employs 1,600 people at five production facilities: one in Johnsonville, Watertown and Kansas and two in Sheboygan Falls.

The Watertown operation for Johnsonville opened in 1981 in the former Royal Meats butcher shop building that dates back to the late 1800s and is located along the Rock River just a few blocks from the fire department.

After the fire, which was ruled accidental, the company purchased a 68,000-square-foot facility in an industrial park on the city’s south side. The factory, which will include sausage production lines, is scheduled to be completed by the spring and could ultimately employ 220 people, said Kelly Nichols, a spokeswoman for the company that is now based in Sheboygan Falls.

John Kaliebe, 58, a lifelong Watertown resident, has worked at Johnsonville for 30 years and is now a supervisor at the plant. On Friday his work site was the pond where he and his employees, many of them with more than 20 years with the company, worked to make a community a little better.

And the hours are adding up.

The work at Heiden Pond has been ongoing for nearly three years and is being dedicated to two of the founders of Rock River Rescue Foundation, Elmer Schwantes and Dave Schaefer, who both died in recent years. But major progress has been made this year thanks to the Johnsonville crews who have spent between 400 and 500 hours on the property cutting brush and trees, removing debris from the water and laying wood chips on the nature trails that surround the body of water.

The Heiden Pond effort is spearheaded by Kelly Lynch, 60, a physical therapist who has lived in the city since 1988, and his wife, Erin O’Neill, 56. They wrote a letter to Johnsonville asking for help at the pond after getting little response from members of the Rescue Foundation to work on the property this past spring. They never expected 23 people from Johnsonville to show up ready to literally dive into the project.

“I almost cried that day,” O’Neill said. “It restored my faith.”

The pond, along with a neighboring private pond called Lake Victoria, were used in the 1800s as quarries to harvest brick. After production ended, the work sites filled with water and the ponds were born. At one time, Heiden Pond teemed with bluegill and largemouth bass but over the years, the property became overgrown and the water infested with carp. Last year, two beaver, one of which was 58 pounds, were trapped and killed after they caused significant damage to trees in the area.

On Friday, Moreno and 15 other Johnsonville employees, pulled sunken logs, beer cans, a lawn chair, broken milk crate and part of a steel barrel from the pond. They used chain saws and long-handled clippers to cut brush and a donated lawn tractor to haul the limbs and debris to a staging area for pickup by the city, which owns the pond.

On Saturday, muskie and northern pike were stocked between the city’s two dams in an effort to further enhance the fishing on the Rock River, which now boasts a healthy population of smallmouth bass, walleye, crappie and a growing stable of muskie. The fish were paid for by Rock River Rescue Foundation, which will also stock 1,000 bluegills and 100 largemouth bass into the pond this week.

“It’s a pretty little spot but it had turned into a water dump,” Lynch said of the pond. “I just want to see it fixed up and usable. A place for kids to make a cast.”

Jim Boulden, left, a volunteer with Rock River Rescue, and Jose Moreno, an employee at the Johnsonville Sausage plant, pull a chair out from the water as a group works on the clean-up at Heiden Pond in Watertown.

Rufino Chairez, an employee at the Johnsonville Sausage plant, helps clear brush during a restoration project at Heiden Pond in Watertown, Wis. 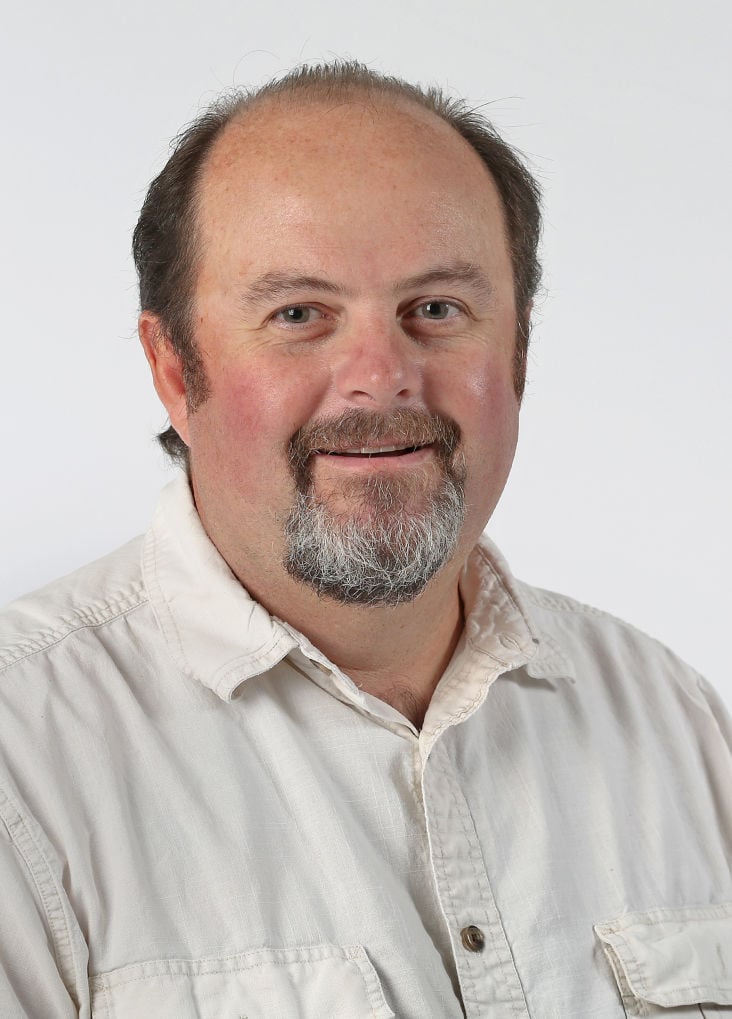